A robotic surgeon is set to be tested aboard the International Space Station (ISS) – and could one day independently perform surgery on humans in space.

After years of support and sponsorship from NASA, scientists in Nebraska have developed a robot called MIRA, short for ‘miniaturized in vivo robotic assistant’.

In 2024, the miniature surgical robot will blast off towards the space station, where it will demonstrate its ability to cut simulated tissue.

Scientists claim it could one day repair an astronaut’s ruptured appendix during a mission to Mars, or remove shrapnel from a soldier injured by an explosive thousands of miles away.

The ISS (pictured) floats in low Earth orbit at an altitude of 254 miles. It flies around the world every 90 minutes, travelling at 5 miles per second

WHAT IS THE MIRA ROBOT?

MIRA, (miniaturized in vivo robotic assistant), is a robotic system developed by experts at the University of Nebraska-Lincoln.

MIRA can be inserted through a small incision, enabling doctors to perform abdominal surgery in a minimally invasive manner.

In previous tests, surgeons have successfully used the device to perform colon resections.

In April, NASA announced it had awarded University of Nebraska-Lincoln $100,000 to ready the surgical robot for its 2024 mission to the ISS.

MIRA is the creation of Shane Farritor, a professor at College of Engineering at the University of Nebraska-Lincoln (UNL).

In April, NASA announced it had awarded the university $100,000 to ready the surgical robot for its 2024 test mission.

‘NASA has been a long-term supporter of this research and, as a culmination of that effort, our robot will have a chance to fly on the International Space Station,’ Professor Farritor said.

MIRA weighs only two pounds and is essentially a long robotic cylinder with two moveable prongs at the bottom.

Each of these prongs has two tiny tools at the end – one to clasp objects, and the other to cut objects.

Eventually they will be used to cut and hold real human organs and tissue, but due to safety, years of R&D and testing has to be completed first.

Currently, the tools are inserted through a single incision in the patient’s abdomen, controlled by a nearby human operator at a surgeon console, but in the future, the robot could be made to work autonomously.

‘As people go further and deeper into space, they might need to do surgery someday,’ Professor Farritor said. ‘We’re working toward that goal.’

During its trip aboard the space station, MIRA will work autonomously, without the guiding hand of a doctor or an astronaut, although it won’t be anywhere near human tissue.

Inside a microwave oven-sized experiment locker, it will cut tautly stretched rubber bands and push metal rings along a wire, gestures that simulate those during surgery. 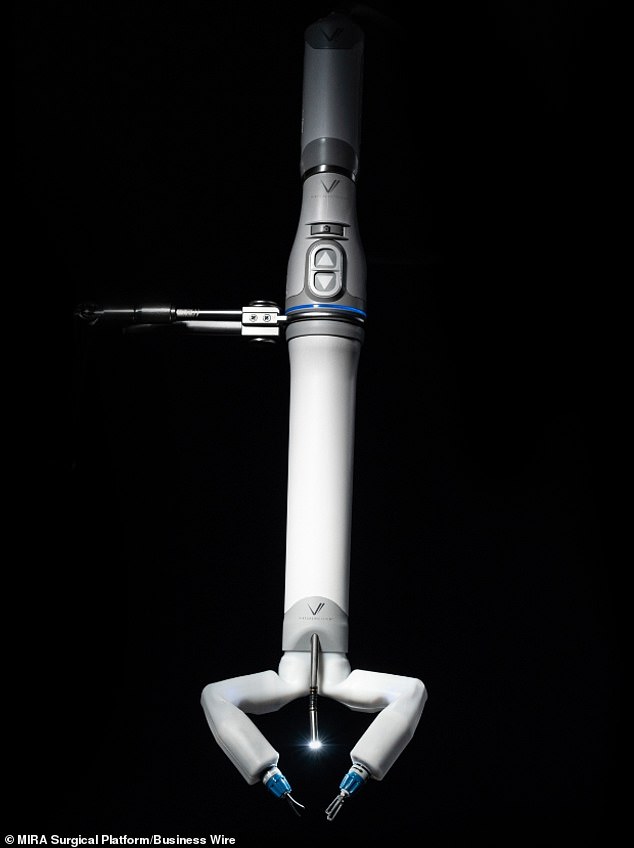 MIRA weighs only two pounds and is essentially a long robotic cylinder with two moveable prongs at the bottom. Each of these prongs have two tiny tools at the end – one to clasp objects, and the other to cut objects. Eventually they will be used to cut and hold real human organs and tissue, but due to safety years of testing has to be completed first

Although Professor Farritor anticipates MIRA will function on its own in 50 to 100 years, the 2024 mission’s goal is not autonomy, but to fine-tune the robot’s operation in zero gravity.

The device is being programmed to work autonomously to conserve space station communications bandwidth and to minimise the amount of time astronauts spend with the experiment.

‘The astronaut flips a switch, the process starts and the robot does its work by itself,’ Professor Farritor said. ‘Two hours later, the astronaut switches it off and it’s done.’

During the next year, he and UNL engineering graduate student Rachael Wagner will work together on the final stages prior to launch. 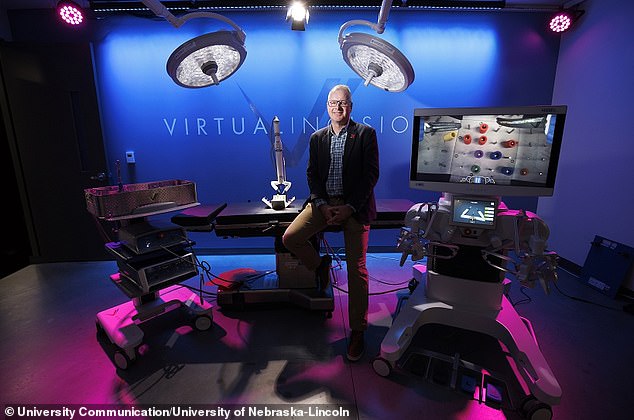 They will write software, configure MIRA to fit inside a space station experiment locker and exhaustively test the device to make sure it’s robust enough to survive launch and its systems will perform as anticipated in space.

MIRA’s surgical ability has already been proven on the ground – in a previous experiment with MIRA, retired NASA astronaut Clayton Anderson took the robot’s controls while at the Johnson Space Center in Houston.

He directed MIRA to perform surgery-like tasks in an operating room 900 miles away at the University of Nebraska Medical Center in Omaha.

Professor Farritor and colleagues have been developing MIRA for nearly 20 years. In 2006, he co-founded Virtual Incision, a startup based on Nebraska Innovation Campus, to bring it to life.

The company thus far has attracted more than $100 million in venture capital investment since its founding.

Crews have come mainly from the US and Russia, but the Japanese space agency JAXA and European space agency ESA have also sent astronauts.

The US space agency, NASA, spends about $3 billion (£2.4 billion) a year on the space station program, with the remaining funding coming from international partners, including Europe, Russia and Japan.

So far 244 individuals from 19 countries have visited the station, and among them eight private citizens who spent up to $50 million for their visit.

There is an ongoing debate about the future of the station beyond 2025, when it is thought some of the original structure will reach ‘end of life’.

Russia, a major partner in the station, plans to launch its own orbital platform around then, with Axiom Space, a private firm, planning to send its own modules for purely commercial use to the station at the same time.

NASA, ESA, JAXA and the Canadian Space Agency (CSA) are working together to build a space station in orbit around the moon, and Russia and China are working on a similar project, that would also include a base on the surface.