Scientists have created incredible robotic grippers inspired by the Japanese art of Kirigami that are delicate enough to lift a raw egg yolk without breaking it.

Kirigami is a Japanese art similar to origami, except it makes use of intricate cuts to paper, rather than relying on folding alone, to create striking 3D art.

The plastic grippers, created by experts at North Carolina State University, are also precise enough to lift a human hair and a live fish without hurting it.

Footage shows that they lift blobs of shampoo foam and even pine nuts off the top of a raw egg yolk without puncturing it.

The grippers are demonstrated in a new paper as a concept for now, but they could have applications for biomedical technologies, such as joint implants.

They also mark a step forward for soft robotics, creating robots that have soft and flexible joints so they can pick things up without breaking them.

Engineering researchers from North Carolina State University have demonstrated a new type of flexible, robotic grippers that are able to lift delicate egg yolks without breaking them, and that are precise enough to lift a human hair 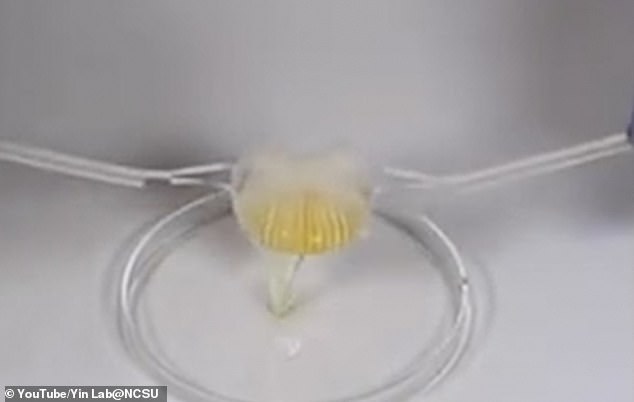 DIFFERENCE BETWEEN ORIGAMI AND KIRIGAMI

With  Kirigami, the cuts you make into a piece of paper can create an elaborate 3D shape when unfurled.

Kirigami, from the words kiru (to cut) and kami (paper), is the lesser-known art outside of Japan.

Until now, creating robots that can handle non-bulky items without damaging them has been a major challenge in the field.

The North Carolina (NC) State University researchers have presented their grippers in a new paper, published today in Nature Communications.

‘We’ve shown that our technique can be used to create tools capable of grasping and moving even extremely fragile objects,’ said study author Jie Yin at NC State.

‘Conventional grippers grasp an object firmly – they grab things by putting pressure on them. That can pose problems when attempting to grip fragile objects, such as egg yolks.

‘This allows us to “grip” and move even delicate objects, without sacrificing precision.’

The grippers have been made from sheets of polyethylene terephthalate (PET), which is known for its wide uses in the food and packaging industries. 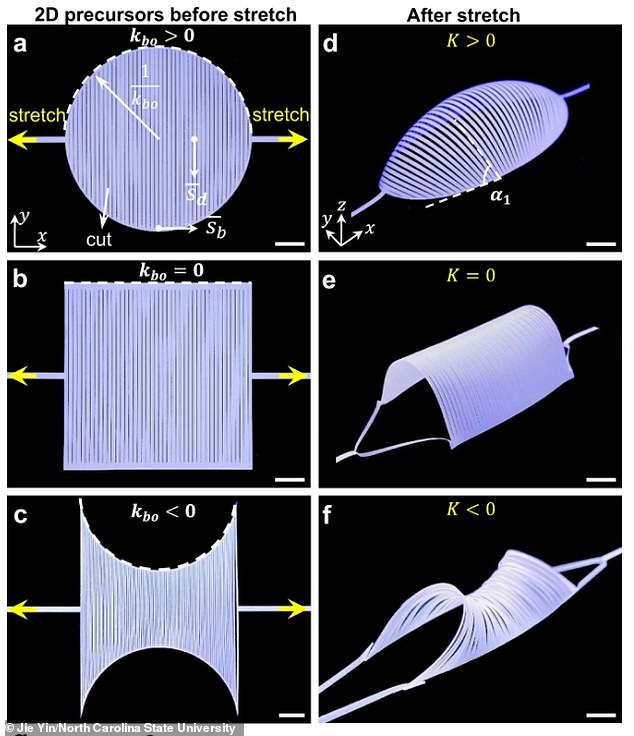 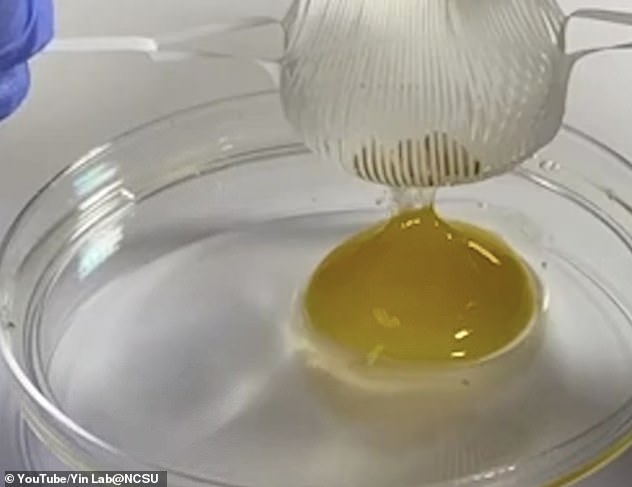 Here, pine nuts on top of the egg yolk are picked up by the grippers without them piercing it

Parallel slits in the sheets were cut out using a laser cutter before being stretched to form their 3D shape.

Researchers settled on a final design that involves pulling on two handles to tighten the delicate, claw-like gripping mechanism and pick up soft objects.

The grippers gently grasp the very underside of the object and interlock like a cage to create a safe compartment to hold the object.

The team believe there are a host of potential applications, such as using the technique to design biomedical technologies that conform to the shape of a joint – like the human knee.

‘This is proof-of-concept work that shows our technique works,’ Yin said. ‘We’re now in the process of integrating this technique into soft robotics technologies to address industrial challenges. 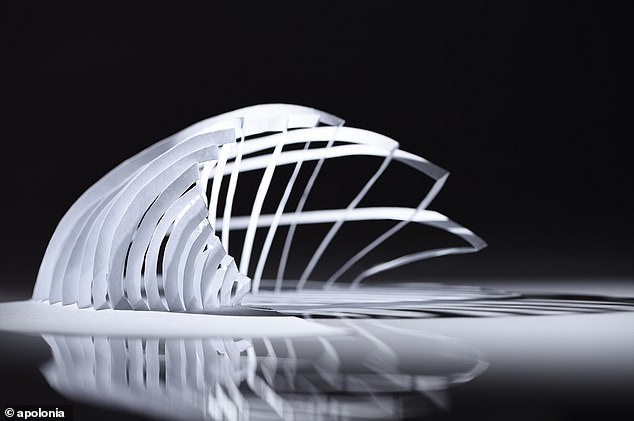 The Japanese art of Origami involves folding paper, while Kirigami involves cutting paper before unfurling it into wonderful shapes (pictured here in a stock image)

‘Think of smart bandages or monitoring devices capable of bending and moving with your knee or elbow.

‘We’re open to working with industry partners to explore additional applications and to find ways to move this approach from the lab into practical use.’

Last year, University of Cambridge experts said they’d created ‘super jelly’, a material composed of 80 per cent water that can survive being run over by a car, which could pave the way for effective soft robotics.

The ‘glass-like hydrogel’ may look and feel like a squishy jelly, but when compressed it acts like shatterproof glass, its developers said.

Cutting your hand, tearing a muscle, or even breaking a bone are all injuries that will heal over time.

Experts at Vrije Universiteit Brussels (VUB) have created a synthetic skin that aims to mimic nature’s self-repairing abilities, allowing robots to recover from ‘wounds’ sustained while undertaking their duties.

Further development of the technology could also allow Terminator-style killer robots, built for the battlefield, to repair the damage they sustain in combat.

Researchers have been with experimenting with soft robots for some time now.

They are constructed from flexible materials, inspired by the soft tissue from which humans and many other organisms are made.

Their flexibility allows them to be used for a wide variety of applications, from grabbing delicate and soft objects in the food industry to performing minimally invasive surgery.

They could also play an important role in creating lifelike prosthetics.

However, the soft materials also make them susceptible to damage from sharp objects or excessive pressure.

Damaged components must then be replaced to avoid the robot ending up on the scrap heap.

But VUB has come up with a new rubber polymer that can repair this type of damage.

Professor Bram Vanderborght of BruBotics VUB, who worked on the plastic, said: ‘The outcome of the research opens up promising perspectives.

‘Robots can not only be made lighter and safer, they will also be able to work longer independently without requiring constant repairs.’

To create their synthetic flesh, the scientists used jelly-like polymers that melt into each together when heated and then cooled.

When damaged, these materials first recover their original shape and then heal completely.

This principle was applied in three self-healing robotic components; a gripper, a robot hand, and an artificial muscle.

These resilient, pneumatic components were damaged under controlled conditions to test whether the scientific principle also works in practice