Scientists revealed a robot dog that can teach itself to walk in just one hour.

In a video released by researchers, the 4-legged robot is at first seen flailing its legs in the air and struggling – but after just 10 minutes it can take steps – and by the one hour mark it’s walking quite easily, rolling off of its back and even navigating being knocked over with a stick by one of the researchers.

Unlike many robots, this one was not shown what to do beforehand in a computer simulation.

Danijar Hafner, an artificial intelligence researcher at the University of California, Berkeley, worked with his colleagues to train the robot using reinforcement learning.

A robotic dog has been trained to walk, roll over and navigate obstacles in about an hour, University of California at Berkeley researchers reveal. Pictured above, the robot at the five minute mark

‘Typically, robots learn through a large amount of trial and error inside of computer simulations that are much faster than real time,’ Hafner explains to DailyMail.com via email.

‘After solving a task like standing up and walking in simulation, the learned behavior is then run on a physical robot.

This type of machine learning is concerned training algorithms by rewarding them for taking certain actions within their environment.

Hafner and his collaborators – Philipp Wu and Alejandro Escontrela – used an algorithm called Dreamer that works from past experiences to build a model of the real world and also allows the robot to conduct trial-and-error calculations. 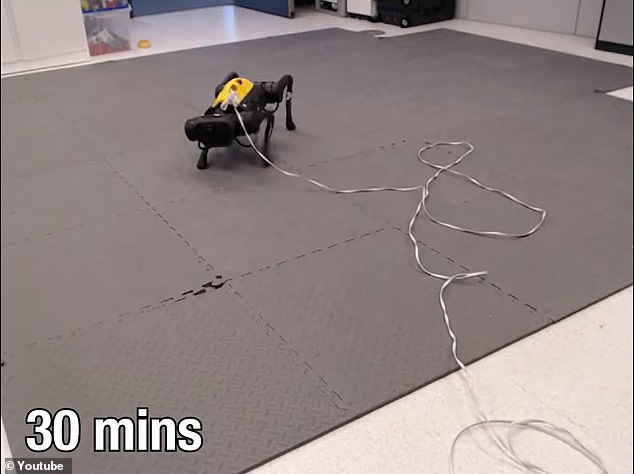 Researchers used an algorithm called Dreamer that harnesses past experiences to build a model of the real world for the robot to learn from. Pictured above is the robot at 30 minutes

‘The Dreamer algorithm has recently shown great promise for learning from small amounts of interaction by planning within a learned world model,’ the researchers state in their paper, which has not yet been peer-viewed.

‘Learning a world model to predict the outcomes of potential actions enables planning in imagination, reducing the amount of trial and error needed in the real environment.’ 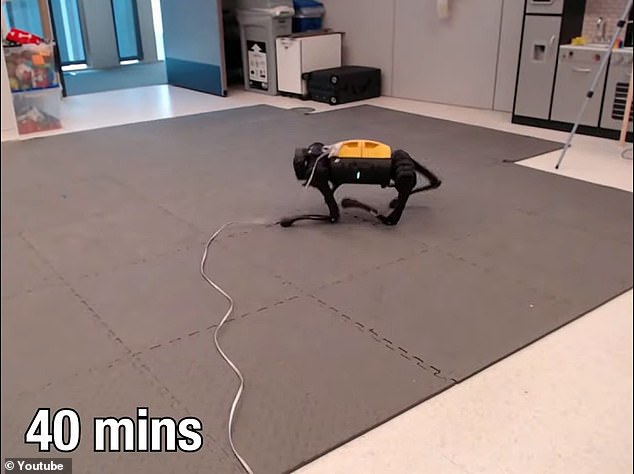 ‘Reinforcement learning will be a cornerstone tool in the future of robot control’ a scientists not affiliated with the study shared. Pictured above is the robot at 40 minutes 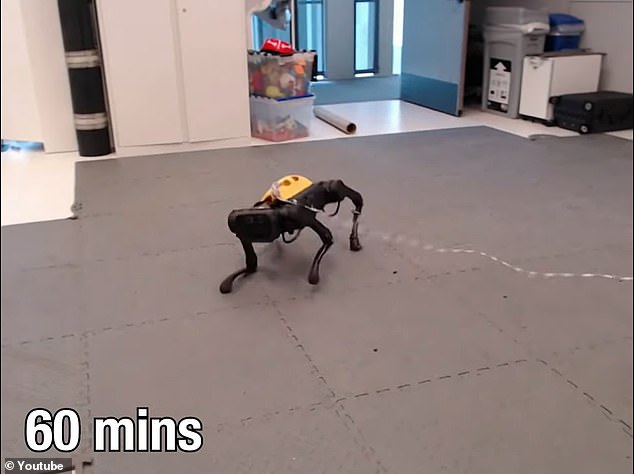 By the one hour mark, the robotic dog, pictured above, can navigate its environment quite well, roll over and more

After the robot learned to walk, it could also learn to adapt to other less predictable outcomes – such as being poked with a stick by researchers.

Even with reinforcement learning, which has been great at outdoing humans in things like board or video games, the world of teaching robots to act properly in the real world is extremely challenging – as engineers must program whether each action is rewarded or not based on whether it’s desired by scientists.

‘Applying reinforcement learning to physical robots is a big challenge, because we can’t speed up time in the real world and robot simulators often don’t capture the real world accurately enough,’ Hafner and his colleagues explained to DailyMail.com. 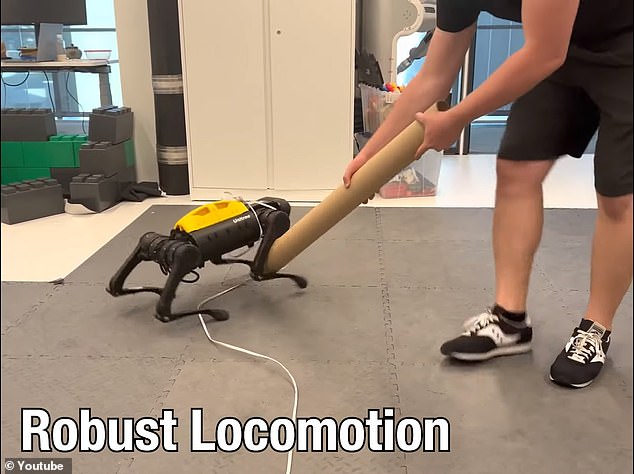 ‘While Dreamer shows promising results, learning on hardware over many hours creates wear on robots that may require human intervention or repair,’ researchers state in the study.  Pictured above, the robot navigates an obstacle

‘Our project demonstrated that learning world models can drastically speed up robot learning in the physical world.

‘This brings reinforcement learning closer to solving complex automation tasks, such as manufacturing and assembly tasks and even self-driving cars.’

‘A roboticist will need to do this for each and every task [or] problem they want the robot to solve,’ Lerrel Pinto, an assistant professor of computer science at New York University, who specializes in robotics and machine learning, explains to MIT Technology Review.

That would amount to a voluminous amount of code and a range of situations that simply can’t be predicted.

The research team cites other obstacles to this type of technology:

‘While Dreamer shows promising results, learning on hardware over many hours creates wear on robots that may require human intervention or repair,’ they state in the study abstract.

‘Additionally, more work is required to explore the limits of Dreamer and our baselines by training for a longer time.

‘Finally, we see tackling more challenging tasks, potentially by combining the benefits of fast real world learning with those of simulators, as an impactful future research direction.’

Hafner hopes to teach the robot how to obey spoken commands and perhaps connect cameras to the dog to give it vision – all of which would allow it to do more typical canine activities like playing fetch.

In a separate study, researchers at Germany’s Max Planck Institute for Intelligent Systems (MPI-IS) revealed in new research that their robotic dog, dubbed Morti, can learn to walk easily by using a complex algorithm that includes sensors in its feet.

‘As engineers and roboticists, we sought the answer by building a robot that features reflexes just like an animal and learns from mistakes,’ Felix Ruppert, a former doctoral student in the Dynamic Locomotion research group at MPI-IS, says in a statement.

‘If an animal stumbles, is that a mistake? Not if it happens once. But if it stumbles frequently, it gives us a measure of how well the robot walks.’

The robot dog works by using a complex algorithm that guides how it learns.

Information from foot sensors is matched with data from the machine’s model spinal cord which is running as a program inside the robot’s computer.

The robotic dog learns to walk by constantly comparing set and expected sensor information, running reflex loops and adapting the way it regulates its movements. 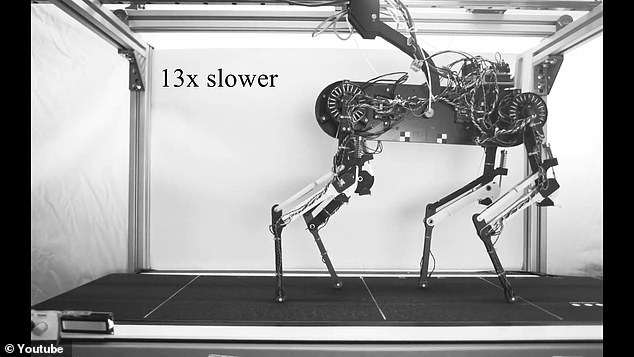 Boston Dynamics first showed off Spot, the most advanced robot dog ever created, in a video posted in November 2017.

The firm, best known for Atlas, its 5 foot 9 (1.7 metre) humanoid robot, has revealed a new ‘lightweight’ version of its robot Spot.

The robotic canine was shown trotting around a yard, with the promise that more information from the notoriously secretive firm is ‘coming soon’.

‘Spot is a small four-legged robot that comfortably fits in an office or home’ the firm says on its website.

Spot is all-electric and can go for about 90 minutes on a charge, depending on what it is doing, the firm says, boasting ‘Spot is the quietest robot we have built.’

Spot was first unveiled in 2016, and a previous version of the mini version of spot with a strange extendable neck has been shown off helping around the house.

In the firm’s previous video, the robot is shown walking out of the firm’s HQ and into what appears to be a home.

There, it helps load a dishwasher and carries a can to the trash.

It also at one point encounters a dropped banana skin and falls dramatically – but uses its extendable neck to push itself back up.

‘Spot is one of the quietest robots we have ever built, the firm says, due to its electric motors.

‘It has a variety of sensors, including depth cameras, a solid state gyro (IMU) and proprioception sensors in the limbs.

‘These sensors help with navigation and mobile manipulation.

‘Spot performs some tasks autonomously, but often uses a human for high-level guidance.’