The sun is slowly sinking behind the mountain and the lights are starting to twinkle on snowy hillsides. All is snug and cosy — gemütlich, as they like to say in these parts — except for the most peculiar noise: silence.

I am in Ischgl, the Austrian ski resort famous for the most boisterous apres-ski party scene in the Alps. Normally, sundown would herald the thud of dance music in a resort known as Ibiza On Ice.

For years, its marketing slogan was — and still is — ‘Relax. If you can.’

For now, though, the place is virtually empty and the residents are not remotely relaxed. All are acutely aware that Ischgl has been saddled, however unfairly, with a very different claim to fame: as the super-spreading Covid capital of Europe.

As a new and uncertain season flickers into life, I find Ischgl determined not to see history repeat itself here.

Back in March, as the coronavirus quickly morphed from a news item in China to a global crisis, scientists tried to find out why fresh clusters of the virus were suddenly popping up all over Europe. Within days, several lines of inquiry had yielded the same name: Ischgl.

What’s more, the same nightspot kept recurring, too. A popular apres-ski bar called Kitzloch had thrown up the town’s first official case of Covid after a bartender tested positive on March 7.

I am in Ischgl, the Austrian ski resort famous for the most boisterous apres-ski party scene in the Alps. For now, though, the place is virtually empty and the residents are not remotely relaxed. Robert is pictured on the slopes

Within two days, members of staff had followed suit. In no time, former Kitzloch drinkers from the UK to Cambodia were reporting fevers, coughs, a loss of smell. Worryingly, many had returned home weeks earlier.

Yet instead of winding down their ski season, the local authorities insisted Ischgl was safe.

The government of Iceland may have put Ischgl on the same ‘high-risk’ list as China and Iran after 15 skiers flew back to Reykjavik with the virus. Yet Austria’s response was to blame the infections on the flight, not the ski resort.

And so skiing continued for an extra germ-filled week until Austria suddenly announced the entire valley would be closed within hours. Cue: chaos. Hotel lobbies and buses were suddenly packed with people desperate to escape Ischgl, thus adding to the spread.

An official inquiry has since criticised officials for ‘momentous miscalculations’.

More than 6,000 Ischgl holidaymakers from 45 nations — including the families of 32 people who died — have registered with an Austrian consumer group seeking redress.

Their lawyer, Dr Peter Kolba, claims that up to 11,000 people were infected thanks to that week of fatal dithering, and then went on to infect many more. He puts it down to greed. ‘Ischgl earns 2 million euros a day in the season. They wanted every extra day,’ he says.

Here, at what some are calling Europe’s Covid Ground Zero, I hear a different story. The locals feel that Ischgl’s global party image has made it a very convenient scapegoat. Resorts across Europe, they argue, were doing exactly the same.

But where better to assess the start of the strangest ski season since World War II?

My arrival comes just before the current temporary travel ban on the British. In a normal winter, this weekend would have seen UK airports and ferry ports packed with skiers heading for the slopes. Thanks to the new souped-up strain of Covid-19, however, Brits are either banned or face a ten-day quarantine in each direction. 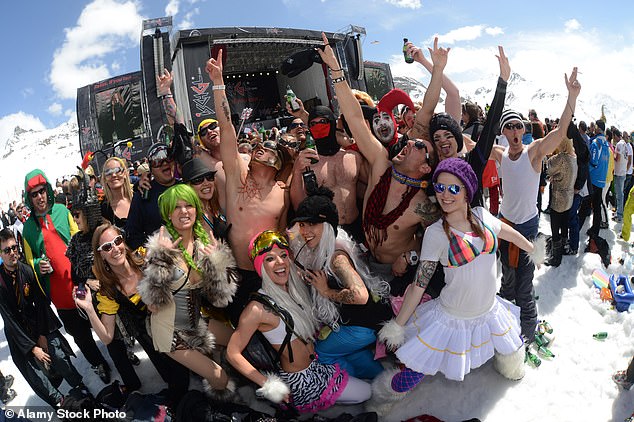 Ibiza On Ice: Tourists at a festival in Ischgl, famous for its wild apres-ski scene

It won’t last, of course. We are paying the price for a world-leading genomic sequencing regime which has picked up what our European neighbours are about to learn for themselves. And once they find they, too, are riddled with the same bug, we can reset the dial.

What then for the estimated one million Brits who love to ski each year?

One thing is pretty clear. The Alpine nations are incapable of a common policy and, instead, are chucking snowballs at each other.

Austria has just opened its ski lifts for locals only. There will be no accommodation (and, therefore, no outsiders) until some time in January. Even so, some Austrian resorts were reporting traffic chaos and overcrowding yesterday.

In France, by contrast, hotels are open but all ski lifts are shut. Being outside the EU, the Swiss are raising two fingers to their neighbours and have opened hotels, ski lifts and even restaurants (the latter must close by 7pm).

Germany and Italy are adamant the others are wrong and have shut everything.

‘No ski lifts open anywhere and no holidays anywhere,’ says the fun-loving Prime Minister of Bavaria, Markus Söder, adding: ‘The goal is to avoid a second Ischgl.’

So, here I am in Ischgl to see how Covid Ground Zero is feeling now.

‘I have worked in tourism for 30 years and have never seen anything like what we saw this year,’ says Andy Steibl, Ischgl’s head of tourism.

‘We have been in the media for more than eight months, so we know that what we do next is very important.’

Everyone who buys a ski-lift pass will be given a ‘tube scarf’, or ‘snood’, that pulls up to become a face mask. People can ski, but there will be no ‘apres’ all season.

‘We know the world is watching,’ says Andy. It certainly is. The other day, Austria’s answer to Panorama arrived in Ischgl to a hostile reception. One man coughed all over the camera crew and told them he was Covid-positive. I expect to have doors slammed in my face. Yet, everyone is perfectly courteous to the Mail.

One shop lends me a pair of skis for a few hours and refuses payment. There is even a welcome at the infamous Kitzloch bar.

I imagined I would find the place boarded up or, at least, renamed. Instead, builders are working on a new terrace extension ahead of next month’s planned reopening. 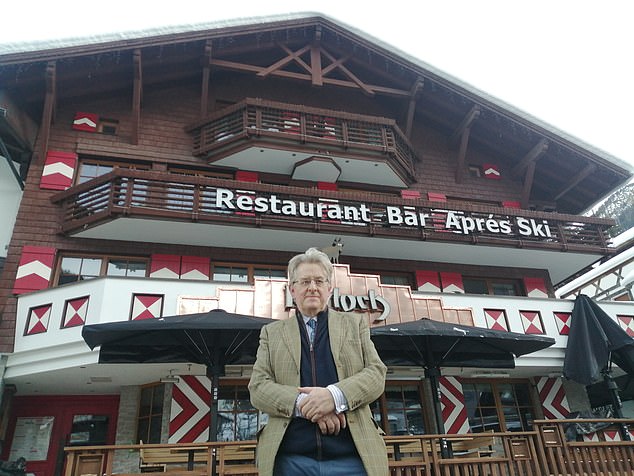 Blame game: Robert outside Kitzloch. My arrival comes just before the current temporary travel ban on the British

Manager Bernhard Zangerl, 26, explains that his family — who have lived and farmed here for generations — had bought the Kitzloch only at the start of last season. He insists they have nothing to hide as he talks me through the most challenging few days of all their lives. ‘All the time, we did exactly what we were told to do,’ says Bernhard. ‘There were mistakes by the authorities, sure, but people were making mistakes all over the world.’

It was on March 5, that the Ischgl tourist office called to say that several people in Iceland had gone down with the virus after partying in the Kitzloch a few days earlier. Attention switched to a German bartender, now known as Patient Zero, who had been off sick for two days. When he turned out to be positive, all the staff — including Bernhard — were sent into quarantine and tested.

‘The authorities said that if we got new staff and disinfected the bar, we could reopen,’ says Bernhard. Two days later, he learned that he and 15 other front-of-house staff were positive (those in the kitchen were not). ‘That was when we became the first bar in Europe to shut down.’

Bernhard insists many myths have evolved — that the Kitzloch was a wild party den; that he and others had knowingly worked while infected. Not so, he insists.

‘This was just a traditional après ski place with music from 3pm to 7pm and then restaurant service from 8pm to 11pm.’

He says that things would get lively, but no more raucous than a boozy chorus of Neil Diamond’s Sweet Caroline or Danish drinking songs. ‘We had a lot of Scandinavian customers.’

Former guests, however, report that the place was so noisy that staff would communicate via football whistles.

One Danish guest recalls a waitress wandering past with a tray of 100 shots. It’s safe to say I am not in Michelin-star territory. Bernhard says he wishes all those involved in the legal action well. But he is looking ahead.

The Kitzloch can operate as a sit-down restaurant once the Austrian government allows hospitality to resume, although après-ski bars remain banned. Patient Zero (whom Bernhard won’t name) has since emigrated to Canada.

All the other staff, however, want to come back, including a Swiss waitress who featured in some press reports as another ‘super-spreader’. ‘She had previously been ill with something different, so everyone said: ‘It must be Covid,’ ‘ says Bernhard.

He believes it would be a mistake for the Kitzloch to rebrand itself and that the loyal clientele will return. ‘Most people understand it was not our fault,’ he says.

So does he regret buying the Kitzloch? ‘No, at least the worst season was the first!’

Dr Kolba, the Vienna-based lawyer for the infected skiers, says that the legal process against the authorities has barely begun.

His first test case will be a claim for 100,000 euros on behalf of an Austrian woman whose husband died after catching the virus in Ischgl. He tells me it is ‘crazy’ that the state is already preparing to reopen resorts.

‘They have learned nothing and it could happen all over again,’ he tells me. ‘But the tourism industry is very powerful.’

Of all the Alpine nations, Austria is most reliant on winter sports. In the Tyrol region alone, one job in three involves tourism. Overall, it accounts for 15 per cent of GDP.

I drive a couple of hours to another famous Tyrolean town much-loved by the British. Kitzbühel will celebrate its 750th birthday this year, however much Covid tries to wreck the party.

‘A ski holiday here is safer than staying in London,’ says Dr Christian Harisch, chairman of the Kitzbühel Tourist Board and owner of several leading hotels in the town.

He believes the town can still salvage this ski season by reducing the number of people in each cable car, improving ventilation and registering all restaurant diners.

Above all, he believes in rapid testing. ‘Here’s my test result from earlier this morning,’ he says, handing me a plastic strip.

Whereupon he rips open a swab, leans back and proceeds to poke his nose and throat all over again for my benefit.

It’s a curious sight to behold at a boardroom table, but, five minutes later, it’s another negative.

‘These are certified tests costing 5 euros each,’ he says. ‘The staff are all tested and our guests can have one every day if they want. Have one with your breakfast!’

He is furious Switzerland is stealing a march on everyone else, pointing to the Swiss resort of St Moritz. ‘They have a worse infection rate and St Moritz hotels are 100 per cent full,’ he says.

So where does this leave the British skier? For the moment, a trip to Europe is not an option.

But industry veterans, such as James Palmer-Tomkinson, of PT Ski, a well-known British company in the Swiss resort of Klosters, expects demand to rocket later in the season when current glitches are sorted out.

Peter Hardy, ski writer and editor of Welove2ski.com, says many of the higher resorts will want to extend their season into May, snow permitting. For now, I can report that, here at Covid Ground Zero, it is pure Good King Wenceslas — deep and crisp and even.

Unfortunately, at present, the only Brit on the mountain is me.