CCTV footage captures the terrifying moment two armed thugs burst into a shop and threaten a female worker with an axe while she cowers in the corner before they run away with stolen cigarettes and cash.

Horrified customers watch as the robbers jump over the Co-Op counter in Newcastle-under-Lyme and scare the worker away from the till.

They then grab cigarettes from the shelves behind the counter and sweep the till for cash before they stuff their stolen goods into a JD Sports bag and run away.

Staffordshire Police Detective Constable David Stubbs said: ‘This was a particularly distressing incident for the member of staff that was simply doing her job.

‘She was threatened with the axe before the pair raided behind the counter.’

The police have released the CCTV footage so that anyone who recognises the robbers or saw vehicles acting suspiciously before or after the robbery. 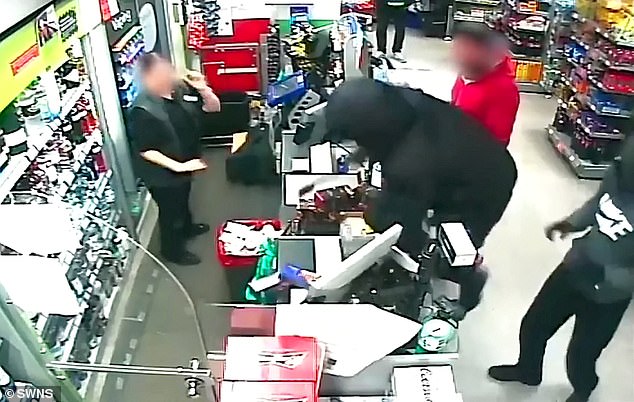 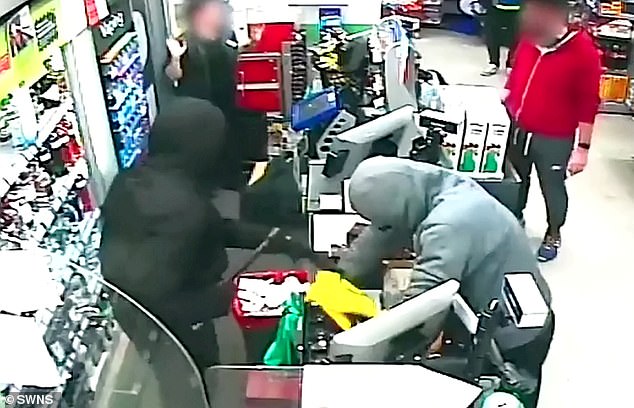 ‘We’re determined to bring the offenders to justice and we would like to hear from anyone who has any information to get in touch as they could have information that may be able to assist with our investigation,’ said Stubbs.

Anyone with information can call 101 quoting incident number 602 of 16 January, direct message Staffordshire Police on Facebook or Twitter or email david.stubbs@staffordshire.pnn.police.uk.