Still lifesaver! RNLI marks 40 years of service by volunteer with a giant mural of his face looking out to sea

A carriage clock or perhaps a nice bottle of whisky were once traditional gifts to recognise long- serving staff.

But for Royal National Lifeboat Institution volunteer Mike Jones a rather different tribute marks 40 years of rescues – a giant mural of his face gazing out to sea, painted by a graffiti artist.

The artwork – 43ft high and taking up the entire gable end of a terraced house – is titled ‘unsung hero’.

Yesterday Mr Jones, 58, of New Brighton RNLI on the Wirral, said: ‘I only found out it was going to be painted last week. It was a bit of a surprise to say the least.

‘They told me what they were doing and said they hoped I didn’t mind. I could hardly say no.’

He added: ‘It’s an amazing accolade, I think it’s brilliant. But the stick I’ve been getting from people over the last few days is amazing!’

Mr Jones – whose day job involved supporting troubled teenagers at a school – has been volunteering for the lifeboat station since he was a teen himself.

Over the years he has carried out hundreds of rescues.

Since he turned 55, he has been restricted to shore duties, responsible for launching the lifeboat, which has made more than 60 rescues so far this year.

‘It’s hard seeing them heading off to sea without me, but apparently the mural is the last thing they can see, so at least I’m going to be looking out for them,’ he said. 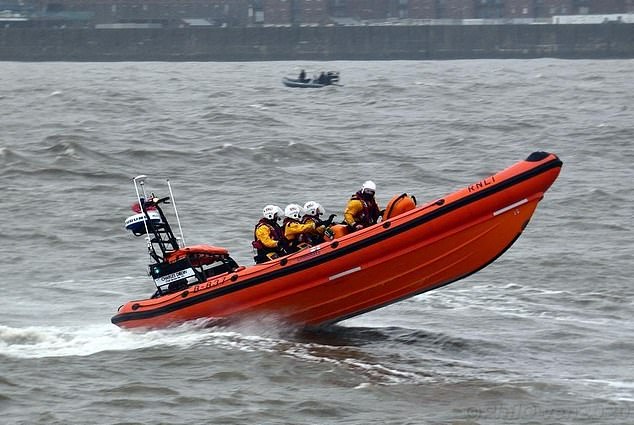 The artwork is one of 25 commissioned by regeneration firm Rockpoint Leisure as part of efforts to revive New Brighton’s Victoria Quarter.

Welcoming the mural, Ian Thornton, lifeboat operations manager for New Brighton, said: ‘This is a fantastic and fitting tribute to an amazing person who has volunteered for 40 years with the RNLI.

‘Due to the location of the mural, Mike will always be looking out to sea to keep an eye on what’s going on.’

The painting is the handiwork of ‘Smug One’, also known as Sam Bates.

Based in Glasgow but born in Australia, he has been hailed ‘a genius’ for his hyper-realistic photograph-style murals on buildings around the world.

‘I hope that the work draws attention to the bravery and personal generosity of the service,’ he said.