The effects of the nationwide shortage of building materials and the resulting rise in prices was highlighted in a TikTok video from a Melbourne carpenter.

The clip by Robbie Wright, who runs Wrightway Carpentry, shows how some builders are changing their construction methods due to rising price of timber.

‘Look at the timber crisis we’ve got here in Australia,’ he says in the clip as he walks through a partly built home.

Wall studs are vertical pieces of wood or metal which help form internal frameworks of a building.

The studs are made up of long singular pieces of timber, but those inside the home filmed by Mr Wright were separate pieces joined by gang plates, which hold wood trusses together using steel teeth.

In his TikTok clip, he explains the technique has become common as the industry endures testing times.

Carpentry Australia said the video highlights a real problem being faced within the construction industry.

‘It is hurting all involved, not least being the carpenters, builders and consumers,’ a spokesperson told news.com.au.

‘While the product might actually be structurally suitable in this instance…the method provides a less desirable outcome during construction, and is in fact more time-consuming and expensive to produce.’

Times are tough for builders – even for TV identity Scott Cam, with The Block host stating he feels for Aussies who will struggle to get ‘small home renos’ completed, with materials increased in price by between 30 and 40 per cent

The crisis has even affected Channel Nine’s reality show The Block, with host Scott Cam telling A Current Affair: ‘We’re running out of materials, but we’ve got a corporate budget we can work towards and we can get extra money’.

Cam explained suppliers often can’t accommodate subcontractors and builders when it comes to materials – and basic small items such as brick ties are unavailable.

He said he ‘really feels’ for typical Aussies who will struggle to complete home renovations given materials have increased by as much as 40 per cent.

He pointed to some small businesses ‘absolutely bleeding’ and many builders completing projects at a loss financially.

Problems first arose when the government shut down all construction in NSW for two weeks in July last year.

The ACT followed suit in August, with Victoria in September as Covid case numbers continued to rise. 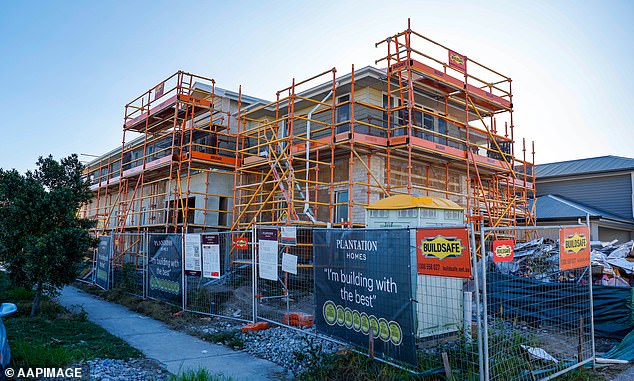 A combination of increased prices, continual rain and lingering effects from Covid-19 shutdowns has the building industry on its knees in Australia (pictured, a partially completed home on the Gold Coast this week)

Following the reopening, restrictions on a number of local government areas resulted in further delays on countless job sites.

Mr Seidler is advising builders to negotiate with their clients, but he admits there is no quick solution.

‘Every new contract, we are now saying to builders to do a “cost plus”. That means it’s a cost to you, plus a percentage. Any cost that’s increased is automatically passed on to the client,’

And as builders jack up their prices, clients become disillusioned. When budgets are then exceeded, work often stops.

Relentless rainfall in recent months has also added to the pressure, especially in NSW and Queensland.

Large projects at Sydney’s IMAX theatre and W Hotel have come to a halt following the demise of ProBuild and on the Gold Coast, Condev Construction went into liquidation earlier this year.

Mr Sielder also believes the next six to eight months will be crucial for builders, and economist Chris Richardson was on the same page.

He pointed to Covid changing the economy in ‘lots of ways’ and that customers need to be reasonable. 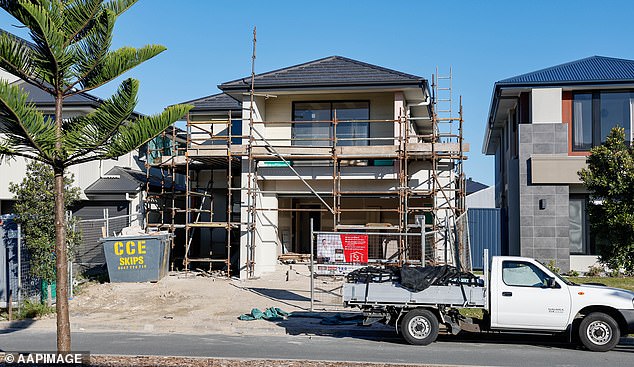 Repeated rainfall in recent months has added to the pressures builders are facing, especially in NSW and Queensland (pictured, a home partially renovated on the fringes of the Gold Coast)