Britain’s home buyers need to downgrade their expectations, magic up some more cash, or get sellers to drop their prices.

The dramatic spike in mortgage rates has heavily eroded purchasing power for buyers, who will find the amount they can afford in monthly payments goes a lot less further than a year – or even a month – ago.

On the basis that most people’s earnings won’t have gone up substantially, the decline in the sum you can borrow based on what you can afford to pay each month will have a hefty impact on home buying ambitions.

Flip this round and the figures become even starker.

At current interest rates, the purchasing power of our theoretical home buyer’s £800 monthly payments drops from a £200,000 mortgage a year ago to £130,000 today.

Even if you compare things to just a month ago things have changed substantially. Early September’s £1,000 monthly payments on a £200,000 loan now only get our home buyer a £165,000 mortgage, which with their deposit added stretches to a £235,000 property.

Buyers further up the cost ladder see an even more pronounced monetary difference in the price they can pay for the same mortgage payments.

You can check the rates you would get and how much it would cost you to buy now with our mortgage calculator. 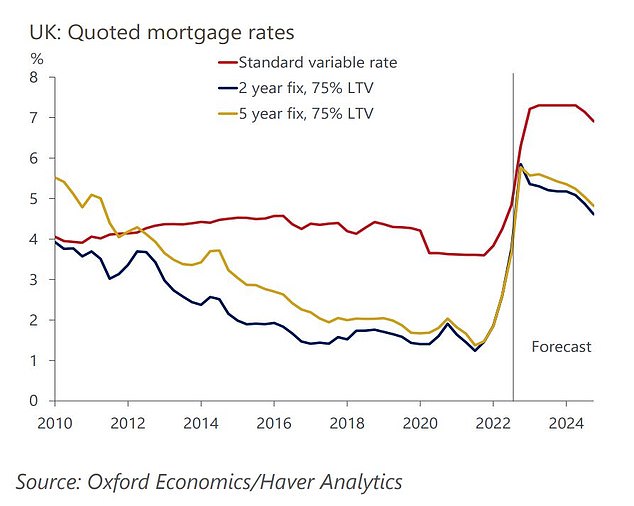 Mortgage rates have rocketed over the past year, hampering how much homeowners can borrow for the same monthly payments

Overall, there has been a significant drop in how much buyers can afford to spend without finding a lot more money each month and that is yet to feed through to the regular property market statistics that we see.

Annual house price inflation is still riding high at 9.5 per cent, according to Nationwide Building Society, and house prices were flat in September.

That data is based on mortgage approvals and so more timely than Land Registry / ONS figures released with a few months lag, but even then it usually takes time for price falls to filter through to Nationwide or Halifax’s indices. Some economists are already predicting a house price drop.

My anecdotal armchair property survey is flashing red for house prices. The past month has seen the ‘newest listed’ run of Rightmove results for my local area show an increasing amount of ‘reduced’ tags.

I did a quick check as I was writing this column as to what has happened this week. Since Monday, there have been 27 properties feature in Rightmove’s ‘newest listed’ in my town: of them seven are new to the market and one has returned to the market after being under offer but 19 have had their prices cut.

One bold home seller has decided to buck the trend and raise their asking price.

Sellers are dropping their initial asking prices by about 5 to 10 per cent, as they downgrade expectations and try to get ahead of the curve.

When it comes to taking the temperature of the market, this is telling, but what remains to be seen is how much of an effect a new era of much more expensive mortgages has on house prices.

Not all buyers are affected, about 35 per cent of home purchases are made by cash buyers who don’t have to worry about anything so awkward as a mortgage.

Nonetheless, while they may not have to darken the bank or building society’s door in order to make their purchase, they might have to sell to someone who does need to.

They can see what is happening in the world and most don’t get to be in the position to stump hundreds of thousands of pounds to buy a property outright without being at least a bit careful with their money.

At the same time as this has happened, energy and other household bills have jumped – although you won’t need me to tell you that.

A food shop is 14 per cent more expensive than a year ago, says the ONS, and everywhere you look people seem to be nudging up prices.

Meanwhile, even with Liz Truss’s £2,500 energy price cap freeze, the average household gas and electricity bill is about double its level at the start of 2022.

For all the property industry’ Panglossian thinking – where all is for the best in this best of possible worlds, as with Voltaire’s eternally optimistic philosopher in Candide – it’s hard to conceive of a scenario where the dramatic jump in new mortgage costs and household bills doesn’t chill the market.

If it keeps a lid on house prices that will be no bad thing, the rampant property inflation seen in the pandemic boom has made homes more expensive than ever before compared to wages and that’s not something to celebrate.

The problem is that the rise in mortgage rates has now been so dramatic that it will cause serious financial pain to some, particularly the heavily mortgaged generation of homeowners in their 40s, 30s and 20s.

But whether rampant property inflation will stop is not the question people are asking, they want to know if house prices will be sent tumbling.

The only answer to that type of question though is: ‘Who knows?’

Most thought that house prices would suffer a potentially hefty and prolonged fall after the initial freezing of the property market when we went into lockdown early in the Covid pandemic; instead after a brief wobble we got a boom that added 20 per cent.

That means any predictions should be taken with a pinch of salt, particularly bearing in mind that the opposite of what common sense says should happen is often likely to occur in the UK property market.

Ultimately, Britain’s property market has been sustained for years by people being able to borrow at ever cheaper rates to afford ever higher prices. Mortgage rates have staged a dramatic U-turn this year, surely that has to change the game eventually.

Even if we have already reached the peak for mortgage rates – which amid the market thunder it’s possible we get to before base rate peaks – it’s hard to envisage a scenario where money becoming much more expensive doesn’t dent house prices.