Having acquired Filta for £49.2million earlier this year, the group noted the division was benefiting heavily from the increasing price of cooking oil, which franchisees often amass before selling to other customers.

Pouring money: Having acquired Filta for £49.2million earlier this year, Franchise Brands noted the division was benefiting heavily from the increasing price of cooking oil

But it is also driving higher demand for the Filta Fry process, something the firm claims can double the length of time cooking oil is used, while the appreciating dollar is providing a further boost to the bottom line.

At the same time, Franchise Brands observed ‘continued strong momentum’ in sales at its Metro Rod subsidiary, prompted by franchisees widening their service offering, especially with regards to pump service and maintenance tasks.

Consequently, it now anticipates sales surpassing current market expectations of £92.9million this year, alongside adjusted underlying earnings and earnings per share of more than £14.3million and 7.31p, respectively.

Stephen Hemsley, the group’s executive chairman, said the result ‘demonstrates the strength of our growth strategy and quality of our franchise networks.

‘I am particularly pleased that the acquisition of Filta has given us a significant international presence in the large franchise-friendly North American market.

‘This will considerably enhance our scope for both organic development and accretive B2B acquisitions.’ 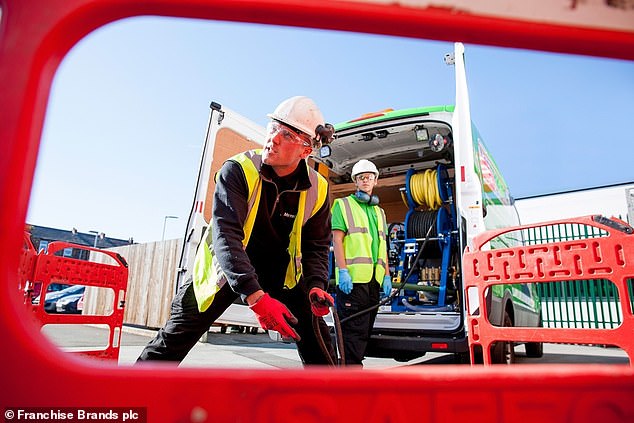 Services: Franchise Brands controls a network of around 600 franchisees across the UK, Europe and North America who operate under nine principal brands

Following the release of its trading update, Franchise Brands shares had jumped 7.1 per cent to 160.7p by the late afternoon on Thursday, although their value has slightly fallen since the start of the year.

Based in Macclesfield, the company controls a network of around 600 franchisees across Britain, Europe and North America who operate under nine principal brands.

Franchise Brands said the latter division was having trouble gaining new franchisees in the UK due to the country’s labour shortages, with vacancies standing at more than 1.2 million as of October.

However, mirroring remarks he made when Franchise Brands published its interim results in July, Hemsley said the firm remained ‘highly profitable and cash generative’ with a large ungeared balance sheet to boot.

He added: ‘The group is in a robust financial position to weather more challenging economic conditions and take advantage of future growth opportunities both in the UK and in the US. I, therefore, look forward to the future with considerable confidence.’