Rishi Sunak warned of tax rises to come and lavished praise on ‘special’ Boris Johnson today as he tried to quell growing rumours of a feud over lockdown.

The Chancellor hailed the PM as a ‘rare’ communicator who had ‘got the big calls right’ as he delivered his keynote speech to Tory conference.

Mr Sunak again conceded that he will not be able to save all jobs, but pointed to the huge government bailouts so far and said his sole priority woudl be to spread ‘opportunity’.

He also delivered a stark warning that tax rises and spending cuts might be needed after the immediate crisis passes.

Mr Sunak said ‘over the medium term’ the government will need to ‘get our borrowing and debt back under control’.

‘This Conservative government will always balance the books,’ he said.

The speech came after Mr Sunak risked fueling the speculation of tensions with Mr Johnson branded the 10pm pubs curfew ‘frustrating’ and insisted he had ‘no regrets’ about the Eat Out to Help Out scheme.

By contrast the PM admitted yesterday that the dining subsidies might have contributed to the sharp rise in coronavirus cases.

The two men were pictured together visiting an energy firm this morning in an apparent bid to smooth over the situation. 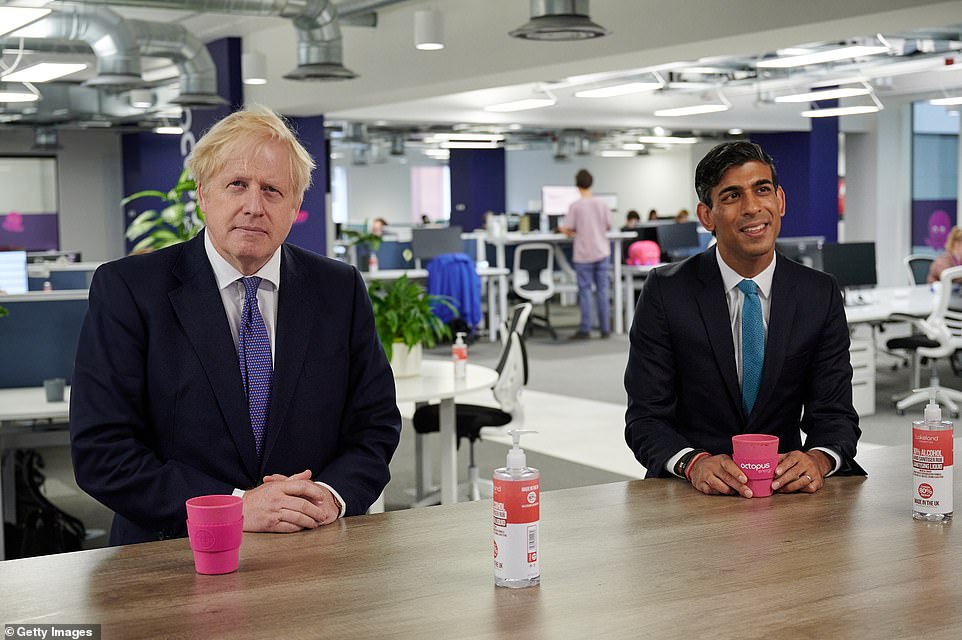 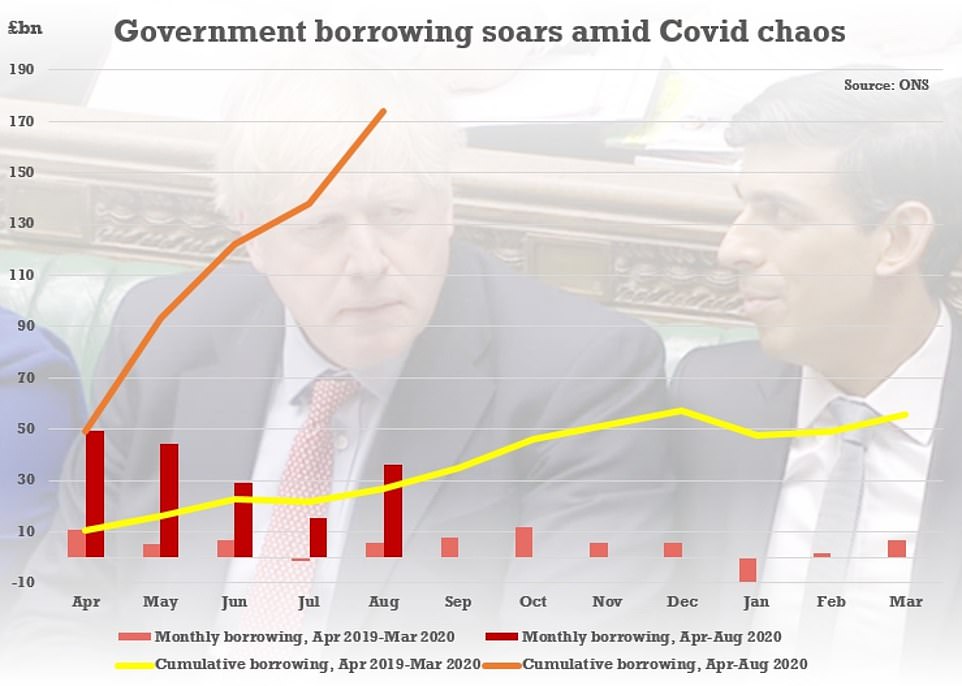 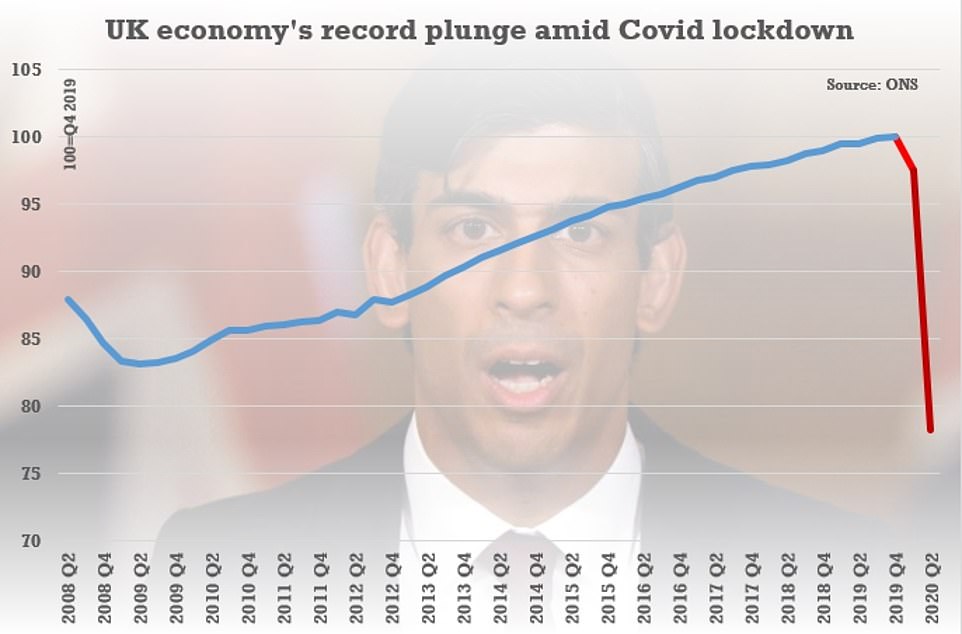 Official figures for the fall in GDP during the three months to June have been revised down from 20.4 per cent to 19.8 per cent. However, the scale of the drop still makes it the biggestin modern history 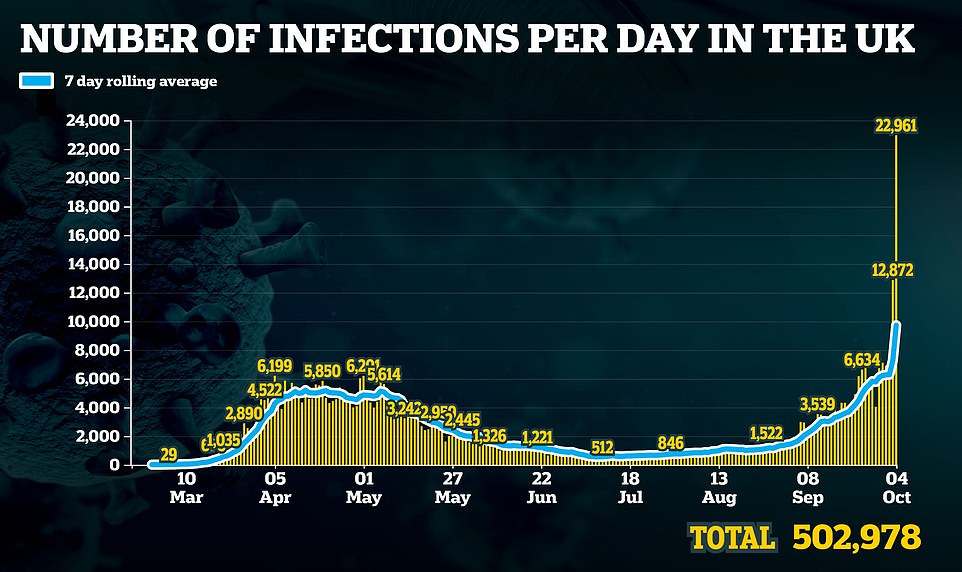 The daily totals rocketed over the weekend after the ‘glitch’ resulted in officials adding on thousands of cases that were missed last week. However, that merely shows the dates the cases were reported, rather than when the positive tests happened

Mr Sunak told the conference – being held virtually due to the pandemic – that he was ready to do whatever he could to protect the economy.

But he also signalled that there will have to be a reckoning for the government’s huge outlay.

‘We will protect the public finances. Over the medium term getting our borrowing and debt back under control,’ he said.

‘We have a sacred responsibility to future generations to leave the public finances strong, and through careful management of our economy, this Conservative government will always balance the books.

‘If instead we argue there is no limit on what we can spend, that we can simply borrow our way out of any hole, what is the point in us?’

Mr Sunak has been cementing his status as the leading Cabinet ‘hawk’ on the need to get the economy running again, winning plaudits from MPs who are furious with Mr Johnson for curbing civil liverties and trashing business.

That has sparked claims of tensions between the two politicians. But Mr Sunak tried to draw a line under the rumours today with a gushing tribute to the premier.

‘I’ve seen up close the burden the Prime Minister carries,’ he said.

‘We all know he has an ability to connect with people in a way few politicians manage.

‘It is a special and rare quality.

‘But what the commentators don’t see, the thing I see, is the concern and care he feels for people every day, for the wellbeing of every person in our country.

‘Yes, it’s been difficult, challenges are part of the job, but on the big calls, in the big moments, Boris Johnson has got it right and that is the leadership that we need.’ 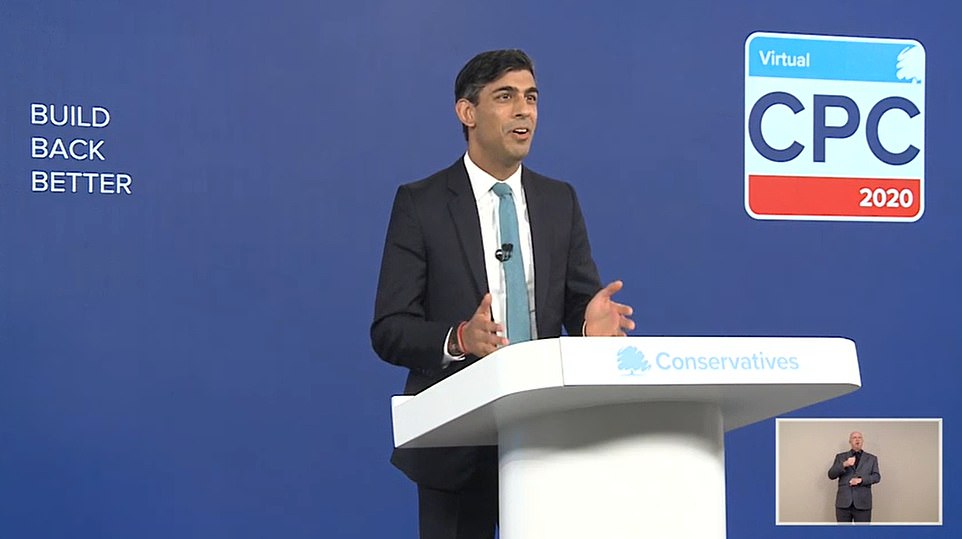 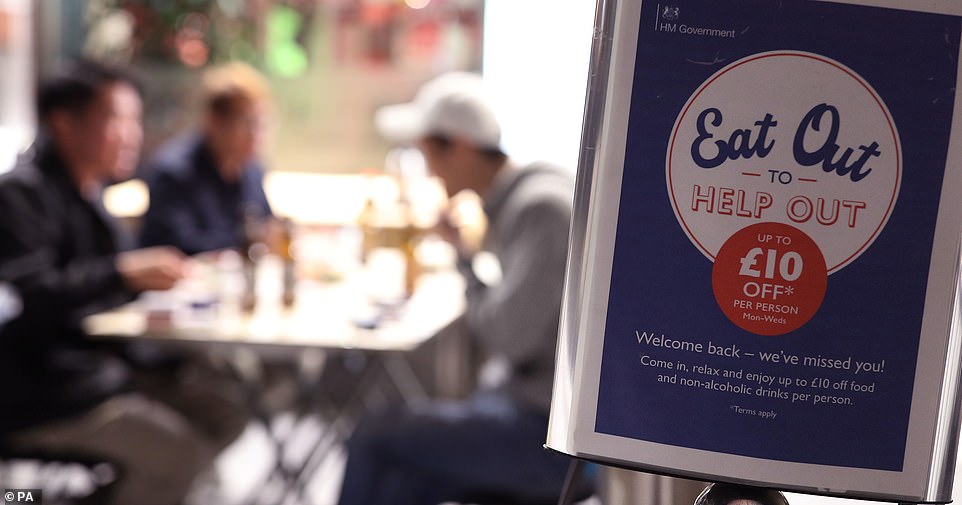 Treasury figures show more than 100million meals were eaten under the scheme, which gave diners a 50 per cent state-backed discount, up to a maximum of £10, on meals every Monday to Wednesday during August

Mr Sunak said he felt ‘pain’ that he could not save every job affected by the devastating coronavirus crisis.

But he said his ‘single priority’ will be to create opportunity – and insisted he is ready to be ‘pragmatic’ on new support packages if they are needed.

‘I have always said I couldn’t protect every job or every business. No chancellor could,’ Mr Sunak said.

‘And even though I have said it, the pain of knowing it, only grows with each passing day.

‘So, I am committing myself to a single priority – to create, support and extend opportunity to as many people as I can.

‘Because even if this moment is more difficult than any you have ever faced, even if it feels like there is no hope, I am telling you that there is, and that the overwhelming might of the British state will be placed at your service.

‘We will not let talent wither, or waste, we will help all who want it, find new opportunity and develop new skills.’

In an interview ahead of his speech to Tory conference, Mr Sunak said the scheme had propped up two million jobs.

The intervention came after Mr Johnson came under fierce questioning over his handling of the crisis, with criticism of chaotic local lockdowns and shambolic testing. He admitted yesterday that he had dropped his ‘buoyant’ style during the pandemic because it was ‘inappropriate’.

By contrast, Mr Sunak has been praised for his tone talking about the impact of the disease, and the speed with which complicated bailouts including furlough were implemented.

Mr Johnson tried to bridge the apparent gap between their messages yesterday by saying that he wanted the public to be ‘fearless but use common sense’.

Mr Sunak was dubbed Dishi Rishi after unveiling his August scheme of subsidised meals out to help a pub and restaurant sector badly impacted by the coronavirus pandemic.

Treasury figures show more than 100million meals were eaten under the scheme, which gave diners a 50 per cent state-backed discount, up to a maximum of £10, on meals every Monday to Wednesday during August.

Mr Johnson told BBC One’s Andrew Marr Show yesterday that the Treasury incentive ‘may have helped to spread the virus’.

But in his interview Mr Sunak said the success of the initiative had helped prop-up two million jobs and that he had no regrets about paying for it.

‘No, definitely not,’ Mr Sunak said when asked if he held any regrets.

‘We had an industry that I care deeply about because of employment. It’s over two million people.’

Mr Sunak pointed to the low rate of second-wave Covid infections in the South West, a region he claimed made the most use of the scheme, as evidence that the hospitality drive had not had an adverse health effect.

The non-drinker also expressed sympathy over public anger at the 10pm pub curfew brought in as an attempt to curb infections.

‘Everyone is very frustrated and exhausted and tired about all of this,’ he told the paper.

With a series of local lockdowns in place across the country, including in Merseyside, Greater Manchester and the North East of England, a third of the UK population is now living under heightened social restrictions.

But Mr Sunak – who was careful to praise Mr Johnson’s ‘extraordinary’ leadership during the pandemic – sent a warning about any future move that would see the economy shut down again.

It came with Tory anger running high over the government’s approach. Sir Graham Brady, chairman of the influential 1922 Committee of backbenchers, said patience was starting to ‘wear thin’ with local lockdowns.

Sir Graham told BBC Radio 4’s Westminster Hour: ‘When you start to get to speculation about a second lockdown or all of these regional things … I think patience really does start to wear thin and I can understand that.’

Mr Sunak is launching a new jobs scheme to help Britons left out of work as a result of the pandemic.

The £238million Job Entry Targeted Support (JETS) programme will assist hundreds of thousands of people without work for more than three months to get back into employment.

He said: ‘Our unprecedented support has protected millions of livelihoods and businesses since the start of the pandemic, but I’ve always been clear that we can’t save every job.

‘I’ve spoken about the damaging effects of being out of work, but through JETS we will provide fresh opportunities to those that have sadly lost their jobs to ensure that nobody is left without hope.’

A wide range of help will be offered, including specialist advice on how people can move into growing sectors as well as CV and interview assistance.

Work and Pensions Secretary Therese Coffey said: ‘JETS will give recently unemployed people the helping hand they need to get back into work, boosting the prospects of more than a quarter of a million people across Britain.

‘We have provided unprecedented support for jobs during the pandemic, including through furlough and subsidising the incomes of the self-employed – doing all we can to protect people’s livelihoods – but sadly not every job can be saved.

‘This scheme will help those left out of work as a result of Covid-19.’

She said it was one strand of the Government’s wider Plan for Jobs ‘which will also support young people on to the jobs ladder through Kickstart’ and offer the training needed to switch to new roles.

The Department for Work and Pensions is recruiting 13,500 work coaches to help deliver the programme as well as opening further job centres. 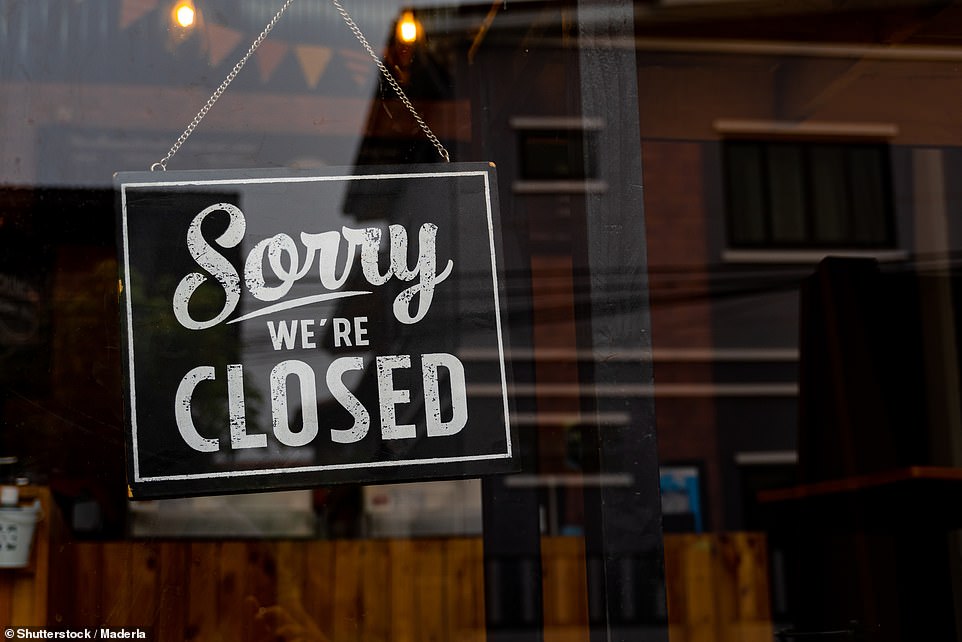