The UK should not accept a post-Brexit trade deal with the EU  ‘at any price’, Chancellor Rishi Sunak said today.

The Chancellor insisted that he had confidence in the British economy ‘in all circumstances’ to do well after the transition period ends on December 31.

He spoke today amid ongoing talks between both sides in search of a deal, with disagreement still outstanding over fishing rights and state aid rules.

A deal is said to be 95 per cent done, but it is the last 5 per cent which have been at the centre of a tug-of-war for months.

Mr Sunak told the BBC’s Andrew Marr: ‘I think we’re making progress in the talks and I remain hopeful that we can reach resolution.

‘I think we’re being entirely reasonable with our requests and have been consistent and transparent through this process about what’s important to us. But we will prosper in any eventuality.’

‘I think the most important impact on our economy next year is not going to be from that, it’s because of coronavirus.’

He added: ‘We should not be going for a deal at any price, that would be the wrong thing to do and I think there are things that are important to us in these negotiations, and we’ve been entirely, as I said, reasonable, consistent and transparent.’ 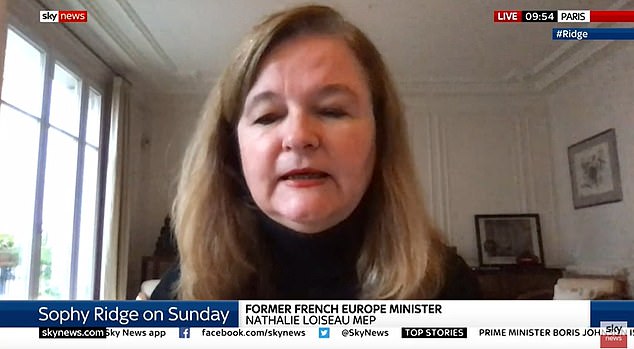 Speaking to Sophy Ridge on Sunday about the state of the trade deals, Nathalie Loiseau, a former Europe minister under Emmanuel Macron, said: ‘I am a politician, I am neither optimistic or pessimistic’

The Chancellor also said that the UK wants the ‘same treatment’ as other countries in their dealings with the EU.

He said: ‘We just want pretty much the same treatment as most other countries that do trade deals with the EU get.

‘So, hopefully we can find a constructive place but I’m very confident about the British economy in all circumstances when I think longer term.’

European Commission president Ursula von der Leyen on Saturday, meanwhile, indicated that there had been ‘better progress’ towards reaching an agreement.

Today a French MEP has said that British politicians should refrain from using ‘rhetoric or vocabulary’ to describe the EU as adversaries, as Brexit negotiations continue.

Speaking to Sophy Ridge on Sunday about the state of the trade deals, Nathalie Loiseau, a former Europe minister under Emmanuel Macron, said: ‘I am a politician, I am neither optimistic or pessimistic.

‘We will do everything we can to get a good deal, whether it is possible under this time pressure, honestly I don’t know. I will not tell you we are nearly there because there are still big divergences.’

Ms Loiseau said ‘clarity’ was still needed on both sides for negotiations to be concluded.

‘We are offering an unprecedented partnership with the UK, but this comes with clarity and commitments, and so far they are missing,’ she said.

‘We are partners, we are not meant to be adversaries.

‘I would like to see UK politicians refraining from using rhetoric or a vocabulary as if we were adversaries fighting against each other.

‘We are struggling to build a strong partnership for our future. This is what we owe to our fellow citizens on both sides.’