Rishi Sunak is facing a furious backlash from the High Street after the Treasury confirmed it is delaying the final report on its review of business rates until later this year.

The Treasury blamed the delay on economic uncertainty and said it will now aim to publish the findings from its fundamental review of the property tax in the autumn.

Business leaders warned that delaying reform of the ‘broken system will hamper any recovery’ from the coronavirus crisis.

The major review of the business rates system was announced by the Chancellor at last year’s Budget, with a call for evidence launched in July.

Responses from the call are now ‘being considered’ by the Government, with plans for an interim report to be released on March 23.

Retail, hospitality and leisure operators are currently benefiting from a business rates holiday for the current financial year, which will end on March 31.

However, reports suggest that Mr Sunak could extend the rates holiday at the Budget on March 3.

Sector bosses have called for the £11billion tax break to be extended for another year after the industry was battered by enforced closures due to the pandemic.

Non-essential retail stores are currently shut due to the nationwide lockdown and are hoping to gain clarity over when they can reopen when Boris Johnson unveils his lockdown exit strategy on Monday.

Retail bosses have also called on the Chancellor for a major overhaul of the rates system in order to put store-based business on ‘a level-playing field’ with online retailers, who have seen strong sales growth during the pandemic and pay significantly lower rates.

On Thursday evening, Next boss Lord Simon Wolfson said rates for retailers on the high street should be cut by 35 per cent with the commercial property tax increased for online rival warehouses instead. 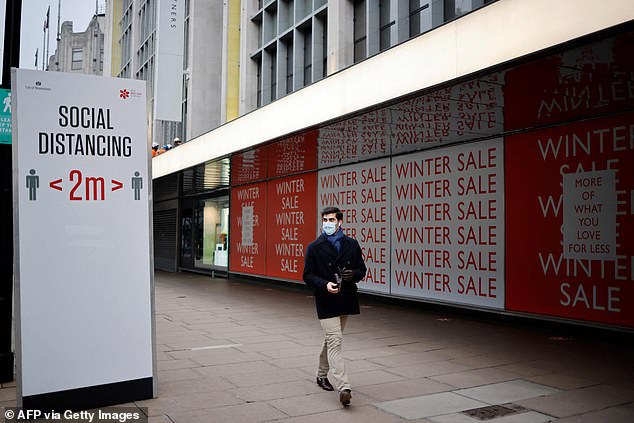 Suren Thiru, head of economics at the British Chambers of Commerce, said: ‘Delivering fundamental change to this longstanding drag anchor on business has become only more pressing in light of Covid-19.

‘Delay in reforming a broken system will hamper any recovery by exacerbating business cash flow concerns as part of the fixed cost base that firms can do little to push downward.

‘The delay in the review underscores the need to urgently extend business rates relief for retail, hospitality and leisure and provide rates relief to all firms whose ability to generate revenues are severely impaired by the pandemic.’