Rishi Sunak is drawing up plans for a new German-style wage subsidy scheme to prop up the UK economy and avoid a wave of job losses when furlough comes to an end, it was claimed today.

The Chancellor is being urged by business chiefs to ‘get around the table’ and agree new job support measures after Boris Johnson ditched his back to work drive and imposed a range of new coronavirus restrictions.

Companies fear the new crackdown will deal a hammer blow to already struggling firms especially with the furlough programme closing at the end of October.

But reports suggest Mr Sunak is already planning a new scheme to prevent job losses after retail bosses warned that up to a million furloughed workers could be made redundant without another bailout.

The mooted plans being looked at by the Chancellor would see the Government and firms share the cost of topping up wages for employees who are only able to work part-time because of the pandemic.

What is the German-style system that Rishi Sunak could use in place of the furlough scheme?

Germany’s has used its Kurzarbeit job subsidy measures during the coronavirus pandemic and has recently extended its use until the end of 2021.

Unlike the British furlough programme, an emergency scheme which pays companies to pay employees not to work, the Kurzarbeit system, which already existed before the pandemic, surrounds short-time working.

It allows employers to reduce employees’ hours while keeping them in a job.

The government pays workers a percentage of the money they would have got for working those lost hours.

According to the Munich-based Ifo Institute for Economic Research, at the height of the pandemic, half of all German firms had at least some of their staff on the scheme.

Influential British political figures including former prime minister Gordon Brown have urged the government to bring in such a scheme, or a similar French-style system, after the furlough scheme ends in October.

The Government’s furlough scheme has helped support almost 10 million jobs during the crisis, covering up to 80 per cent of an employee’s wages up to a maximum of £2,500 a month.

It is now in the process of being wound down and will formally close at the end of next month after racking up a bill of more than £39 billion.

There were already calls from opposition politicians and business groups for the scheme to be extended even before Mr Johnson announced his latest coronavirus curbs yesterday.

But the Prime Minister’s decision to encourage workers to work from home where they are able to and impose a 10pm curfew on the hospitality sector, potentially for the next six months, has spooked businesses and accelerated calls for more help to be brought forward.

Luke Johnson, an entrepreneur and former Pizza Express boss, told BBC Newsnight he believed one million furloughed workers could be axed if the Government does not put in place new financial support measures.

He said: ‘Rates relief and loans to businesses have made a hell of a difference and if they are extended they will help.

‘There are still three million people probably on furlough and many of those jobs are at risk if lockdowns in some form or fashion continue and severe restrictions remain in place.’

He added: ‘It may be that they are simply, all the subsidies are cut off and in which case I would estimate that of the perhaps three million at least a million maybe more will be made redundant because I think those companies will be feeling very demoralised and not confident about investing and rebuilding and possibly they are insolvent therefore they close down altogether.’

Bank of England governor Andrew Bailey said yesterday it was time to ‘stop and rethink’ the end of the furlough scheme as he advocated adopting a new more targeted approach.

‘With the right approach we can stop mass unemployment scarring millions.

‘My message to ministers is clear: let’s get around the table and fast-track a new plan.’ 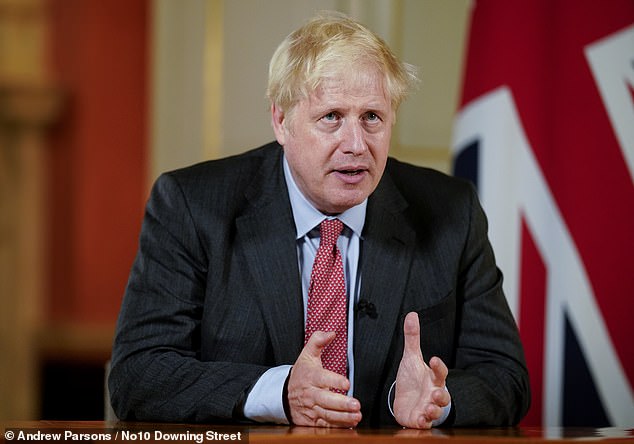 It comes as Boris Johnson yesterday hit reverse on his back to work drive and imposed new restrictions on the Covid-19 hit hospitality industry in a bid to slow Britain’s rising infection rates, while avoiding an economically devastating second national lockdown

Mr Sunak has repeatedly stressed that the furlough scheme will not be extended.

But he has pledged to be ‘creative’ in helping businesses and is understood to be weighing up a number of possible measures to subsidise workers’ wages, having consulted unions and business groups.

It is thought he postponed an announcement due yesterday to extend the Government’s emergency loan schemes in favour of a bigger support package.

One option reportedly being considered is a scheme similar to Germany’s highly-praised Kurzarbeit, or shorter work-time policy, under which firms can radically cut working hours in economic downturns with the state replacing part of their lost income.

The TUC has proposed a similar scheme that would see workers receive 80 per cent of their salary for the hours they are not in work.

Companies would get a 70 per cent subsidy from the Government, provided they bring back every worker on the scheme for a minimum proportion of their normal working hours.

Another proposal put forward by the CBI business group would see subsidies for firms that can offer staff at last 50 per cent of their normal hours, with the cost for non-working hours shared equally by the company, the Treasury and the employee.

Dame Carolyn Fairbairn, director general of the CBI, said: ‘A second national lockdown would be devastating for our economy, so it’s right to prioritise bringing infections under control.

‘But there can be no avoiding the crushing blow new measures bring for thousands of firms, particularly in city centres and for our hospitality sector employing over four million people.

‘It is vital that all announcements of restrictions go hand in hand with clarity on the business support that protects jobs.’

The furlough scheme has cost the Government £39.3 billion to date, with £3.9 billion paid out between August 16 and September 20 alone, according to the latest figures.

More than £13 billion has been handed to firms and workers through five different Government support schemes in the last month.

John Phillips, acting general secretary of the GMB union, said: ‘Other countries have made a head start in offering support, protection and reassurance to industries as our economy stands on the edge of the abyss.

‘The Treasury has promised creative action in this extended, unprecedented period – but time is short.