The collapse of religion in the US may be driving a wave of suicides, drug overdoses and alcohol abuse deaths among the white working class, a new report claims.

Research led by Wellesley College in Massachusetts found a marked rise in ‘deaths of despair’, or fatalities from conditions such as alcoholism and opioid abuse, which are rooted in poor mental health,

Fewer Americans are attending church now than before the pandemic, with weekly attendance falling 10 percent in recent years.

The above graph shows the mortality rate from suicides, drug overdoses or alcohol abuse per 100,000 people (red line). It also shows the proportion of people attending church once a week (blue line). The data is for middle-aged white adults who did not attend college 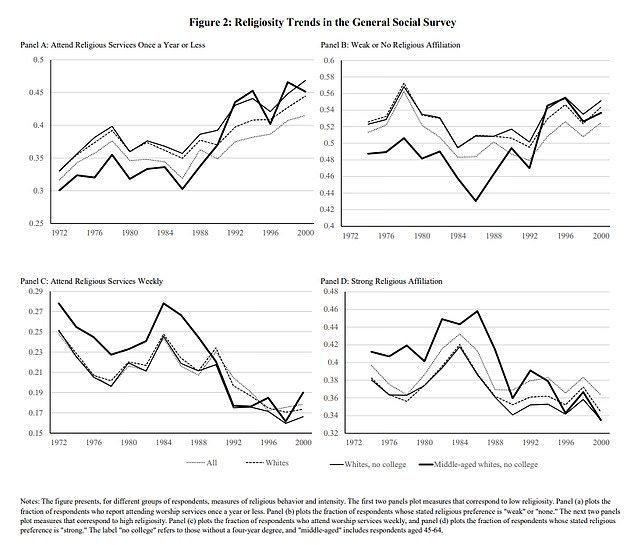 The above graphs show religious adherence among different age groups from 1979 to the early 2000s. It reveals a drop in religion across the US population

Researchers, who published findings as a working paper with the National Bureau of Economic Research, gathered data of deaths from the Centers for Disease Control (CDC) and on religiosity from the General Social Survey (GSS).

The GSS is a biennial survey that gauges Americans on their religion and general social attitude.

The research team looked at the more than a million deaths from alcohol abuse, drug overdoses and suicides from the 1970s to the early 2000s across the US.

They also looked at the proportion of Americans that attended church weekly over the same period.

Research focused on middle-aged white adults who did not go to college because deaths of despair rose in this group earlier than in other demographics.

‘The rise in mortality was preceded by a decline in religiosity among the middle-aged less-educated white demographic,’ researchers wrote.

‘This change in religious practice was large, concerns a phenomenon well-known to be related to health and well-being.

‘[It was also] driven by the same group whose mortality subsequently began to rise and occurred just before the increase in mortality.’ 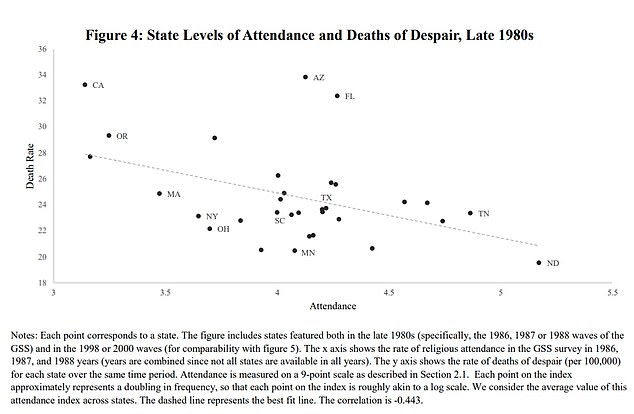 They noted, however, that the study was observational and could not prove that attending church less often had led to the rise.

Other factors, such as the opioid epidemic, could be responsible.

The rate of ‘deaths of despair’ among white middle-aged adults, aged 45 to 64, dropped 40 percent between 1979 and 1991, on a continuously downward trajectory.

But the decline stalled, before starting to reverse in 1995.

By the last year of the study, 2002, the rate had risen by 20 percent from its lowest point – reaching levels not seen since the 1980s.

At the same time, the proportion of middle-aged American adults attending church every week declined.

The researchers suggested that when people stopped attending church they lost the ‘positive external benefits’ of being part of a religious community.

This may have included social support as well as feelings of companionship.

They also suggested that when so many people stopped attending church, some faith groups may also have collapsed — leaving them unable to support members.

Other factors that could have driven the rise include the opioid epidemic, the researchers noted.

But they said that OxyContin — one of the key drivers — did not become available in America until after fatality rates had stalled.

America’s opioid epidemic took off after 2015, and has now reached record levels in the country.

The researchers noted: ‘In recent decades, death rates from poisonings, suicides and alcoholic liver disease have dramatically increased in the United States.

‘We show that these “deaths of despair” began to increase relative to trend in the early 1990s, that this increase was preceded by a decline in religious participation, and that middle-aged white Americans drove both trends’

They add: ‘Our findings show that social factors such as organized religion can play an important role in understanding “deaths of despair”.’

They said people had begun to drop out of church because religion had become more closely associated with politics.

They write: ‘This decline was importantly driven by responses to changes in the US political landscape in the 1980s, as religious and political affiliation became much more correlated than they had been earlier.’

Researchers added that the repeal of blue laws — which prohibited work and commerce on Sundays — also played a role.

Many were in place in the middle of the 20th century, but most have now been removed, opening up commerce and work on the traditional ‘day of rest’.

An American took their own life every 10 minutes last year as suicide rates rose across the US, data reveals.

Statistics showed 47,644 Americans died by suicide in 2021, up four per cent from the previous 12 months and the second-highest tally over the last decade.

The figures follow a two-year decline in suicide rates.

The most likely group to take their own lives were men over 75 years old, while young men aged 18 to 24 saw the sharpest rise by eight per cent in a year.

Experts today described the uptick as ‘disappointing’, but nothing like the ‘major escalation’ predicted when the Covid pandemic hit.

They blamed a combination of factors including worsening mental health, higher gun ownership rates and job losses due to Covid among other factors.

Suicide is the 12th leading cause of death in the United States, according to the American Foundation for Suicide Prevention.

The White House is currently beefing up mental health services for the country with $1 billion over five years to improve offerings in schools and for children struggling with psychological problems in the community.

The data is provisional, but the Centers for Disease Control and Prevention (CDC) said it likely already included nearly all suicides from last year.