Rihanna selected the biggest names in the showbiz world to debut her latest lingerie line on Thursday.

The billionaire songstress put on the spectacular Savage X Fenty Show Vol. 3, which premiered on Amazon Prime Video the following morning, in New York, with a legion of icons hitting the runway.

Cindy Crawford, Irina Shayk, Gigi Hadid, Lourdes Leon, Emily Ratjkowski, Nas, Ricky Martin and Normani were just some of the iconic names from the fashion, acting and music worlds gathering at the event.

Iconic 1990s supermodel Cindy is among the famous names who will be walking down the runway for Rihanna. Current supermodels like Gigi and Emily walked alongside Erykah Badu, Jeremy Pope and Alek Wek.

Throughout the 1980s and 1990s, Crawford was an ubiquitous presence on magazine covers, runways and fashion campaigns. After more than four decades as a household name, she is regarded as one of the foremost supermodels in the world – making her the perfect candidate for the runway.

Irina commanded attention in a sexy snakeskin bodysuit with a large cut-out across the front that exposed her taut midriff. Resting in the crook of Irina arms was a lengthy snakeskin scarf that hung down to the floor as she posed in an incredibly sultry fashion while oozing confidence and sex appeal.

Sizzling: Lourdes Leon and Emily Ratjkowski were as racy as one another in their steamy ensembles 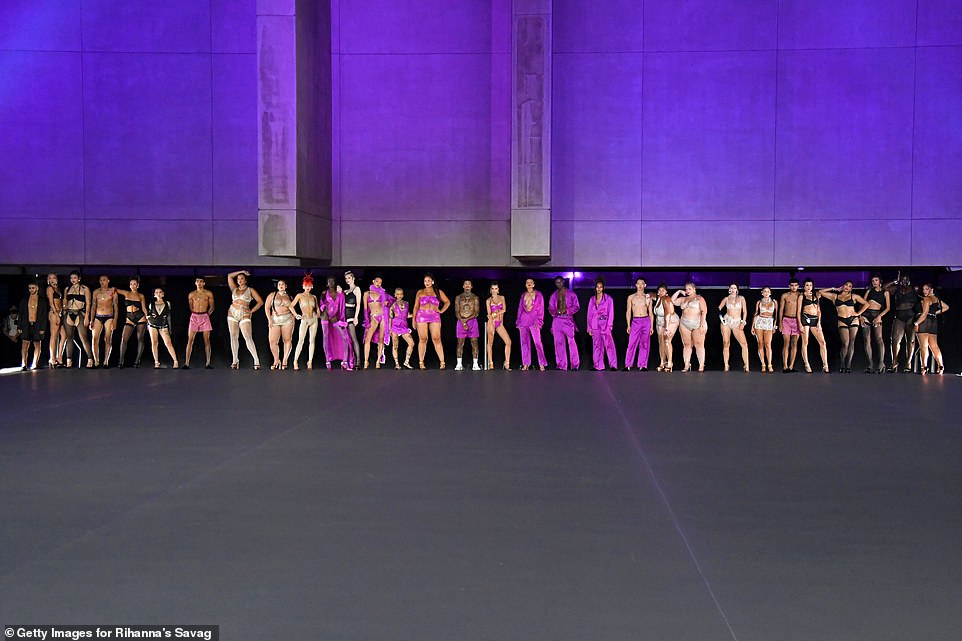 Sizzling: This year’s show includes a more superstar packed guestlist than ever

The Russian beauty’s brunette strands were slicked away from her face and made to look as if they were soaking wet while her make-up was flawlessly applied in a striking style.

As for accessories, Irina, 35, was decked out in chunky gold jewelry from her ears to her wrists. For a touch of added glamour, Shayk wore a tight fitting gold belly chain across her midsection.

She commanded the runway in a pair of strappy suede heels that added height to her already statuesque frame.

Madonna’s daughter Lourdes smoldered in a set of lustrous teal lingerie from the upstart lingerie brand. Lourdes strutted down the runway in thigh-high vinyl boots, which featured wide spool heels. 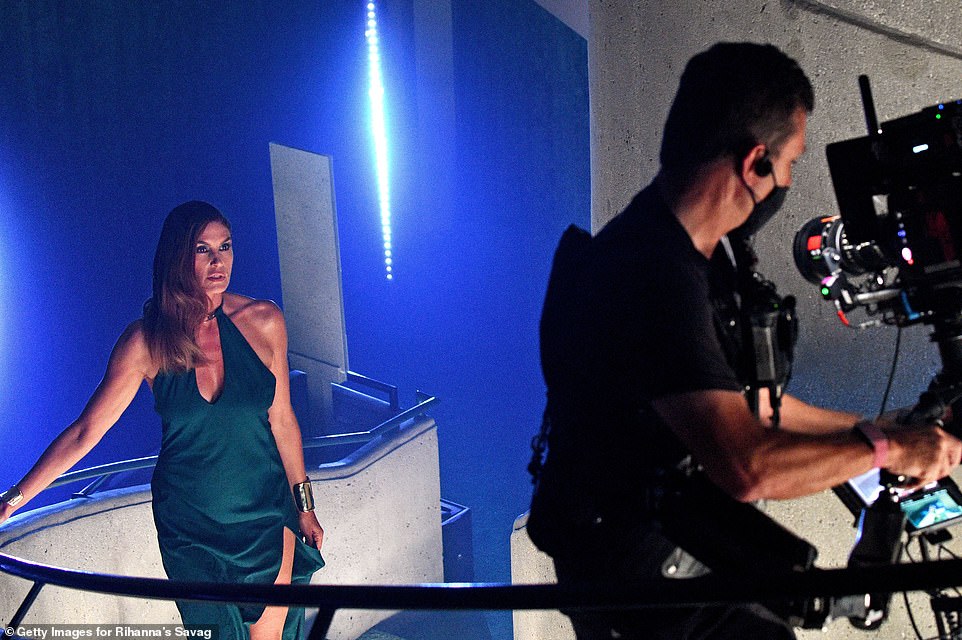 Working it: The supermodel posed on a spiral staircase during the show’s big premiere on Amazon Prime Video, on Thursday

Leggy: Cindy posed with her legs crossed over one another, giving a clear view of her strappy chrome heels

She wore a matching long coat that was left open to reveal her taut tummy. The fashion star added a jewel pair of panties with double straps and a thick strand of beads running across her hips.

Vanessa Hudgens made sure she brought the goods on Thursday, as the High School Musical star, 32, looked incredible in a powder pink lingerie set with a lace bra, matching sheer skirt and tiny knickers creating a red hot look – while she was also showing off her heaving new cleavage in the wake of boob job rumours.

Vanessa looked incredible in the pink ensemble, which made her impressive assets take centre stage as well as he taut abs and lithe legs. Although there has been speculation online about whether she went under the knife Vanessa herself has not publicly addressed it.

Wild side: Irina commanded attention in a sexy snakeskin bodysuit with a large cut-out across the front that exposed her taut midriff 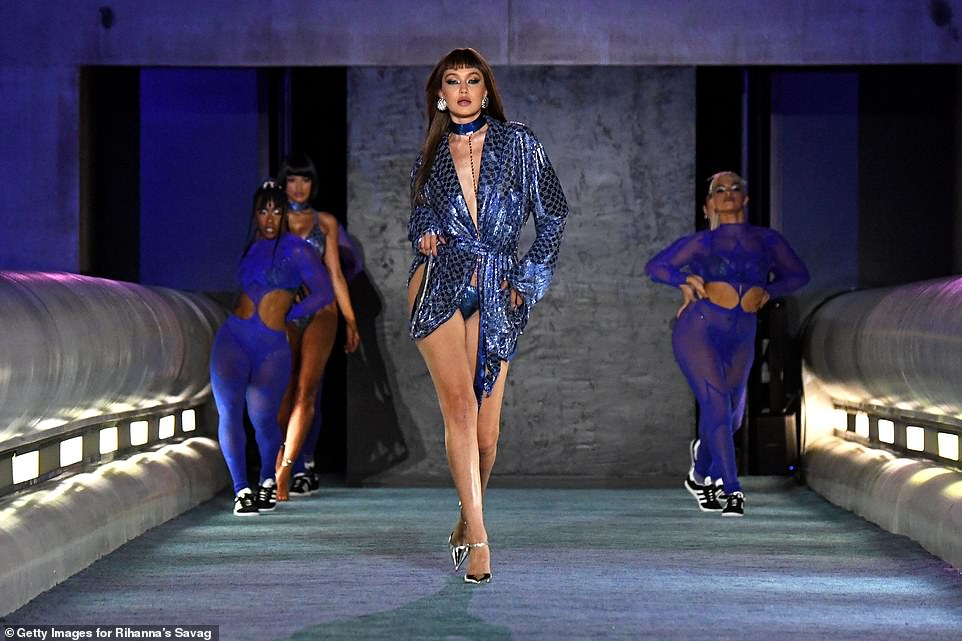 Total pro: Gigi, who just rang in her daughter Khai’s first birthday over the weekend, put her best foot forward in a pair of chrome Mary Jane heels and glitzy jacquard robe 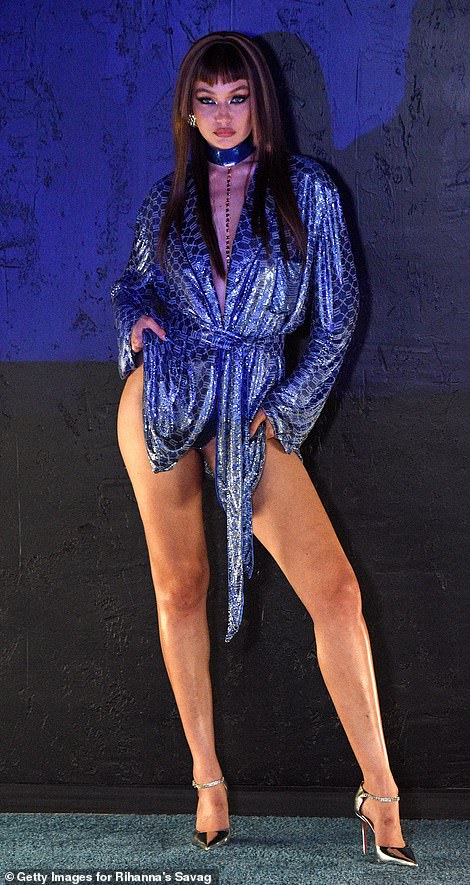 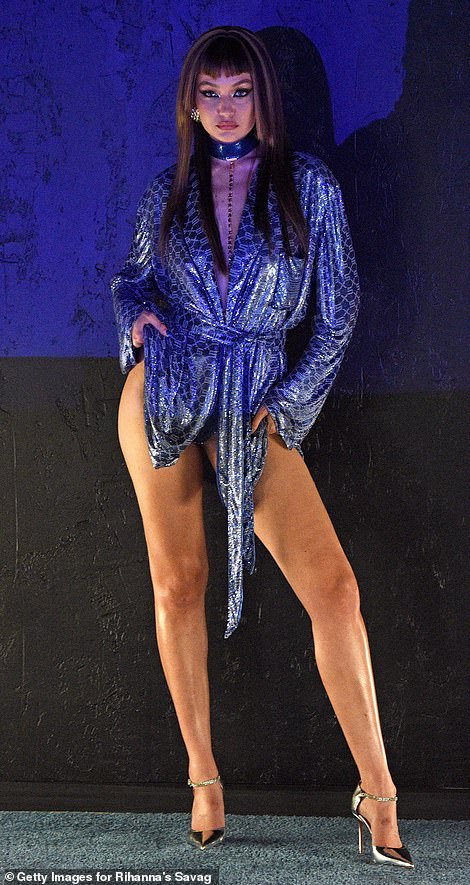 Fearless: The 26-year-old wore nothing underneath besides a pair of tiny bikini-style bottoms that coordinated perfectly with her Hugh Hefner-inspired coverup 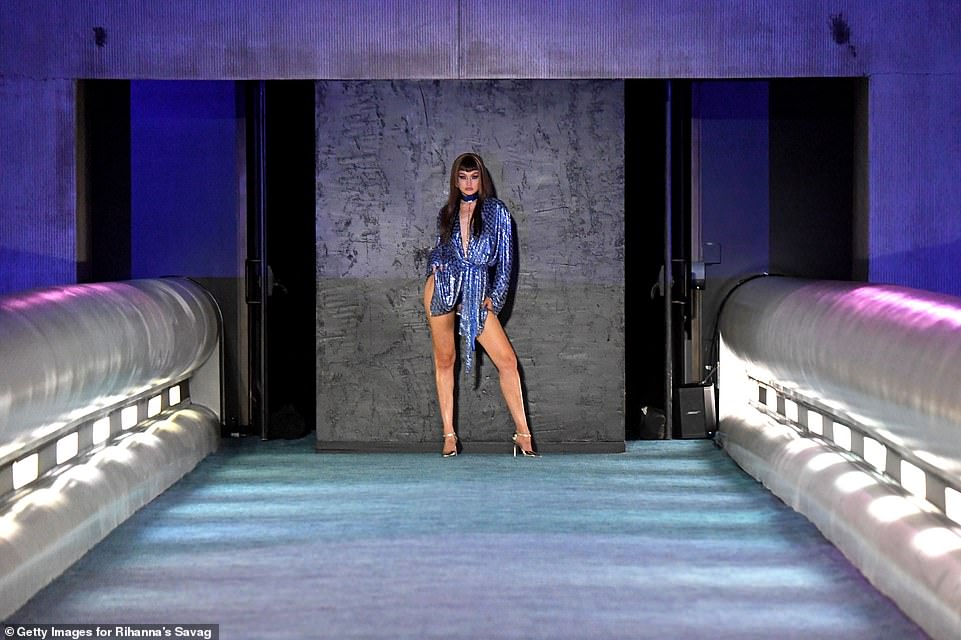 Finishing touches: She had a textured blue choker fastened around her neck while a single gold chain rested between her cleavage

Behati Prinsloo, Troye Sivan and Precious Lee also hit the catwalk and Madonna’s daughter Lourdes was also heating things up. Nas and Ricky Martin were the musical acts plus Normani and Jade Nova, to provide top-notch entertainment amid the fashion extravaganza.

The woman of the moment Rihanna looked incredible in a steamy black ensemble, as she spoke at the show about how she  thinks ‘representation’ is more important than the garments themselves with her Savage X Fenty line.

Speaking about her bid for inclusivity and equality, Rihanna admitted after each show, she questions who was left out and who could be involved next because she wants to help everyone feel they have ‘space in this world’. 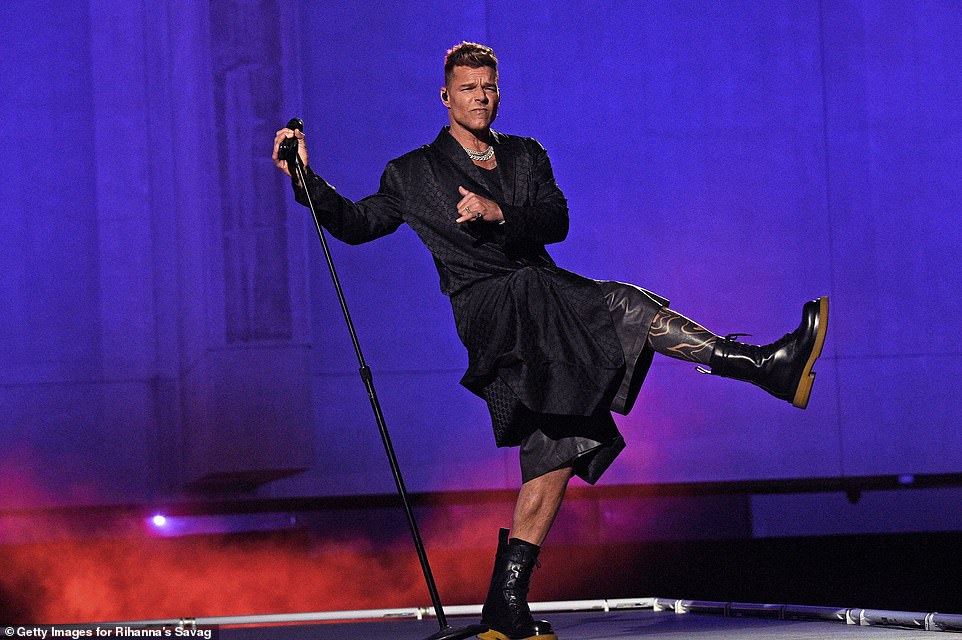 Bust a move: Ricky Martin taking to the stage during Thursday’s runway show 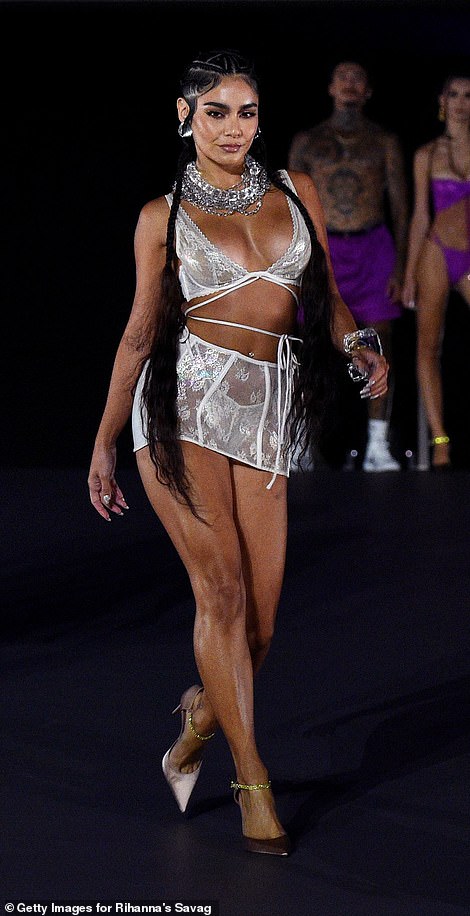 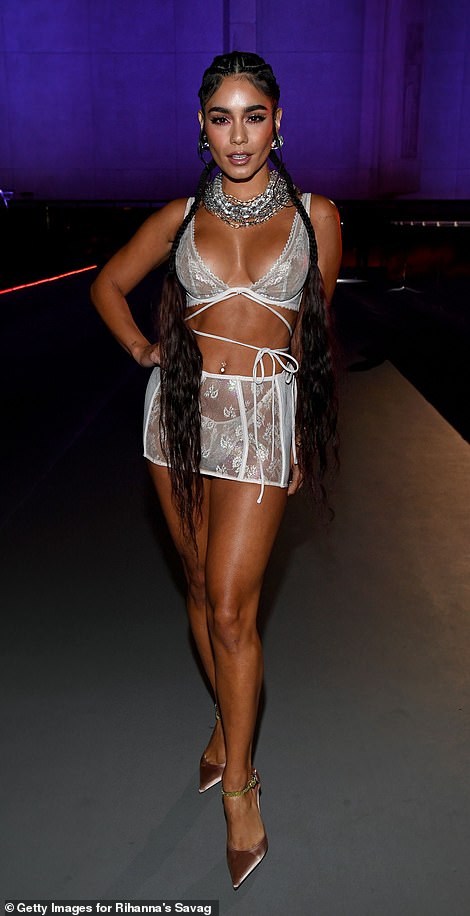 Vanessa Hudgens made sure she brought the goods on Thursday, as the High School Musical star, 32, looked incredible in a powder pink lingerie set with a lace bra, matching sheer skirt and tiny knickers

She said: ‘I’m always rooting for the underdog, and there’s always someone left to represent. Everything that’s been going on in the world has influenced not just this collection, but the way we look at our talent.

‘It’s really influenced the way we look at representation—which, I think, is actually more important than even the collection. It’s a fashion show, yeah, but when people see someone like them, they suddenly feel represented.

‘It brings a lot of confidence out in someone; it gives them a lot of reassurance that they have a space in this world. And that’s something that we push ourselves to expand every single year.’ 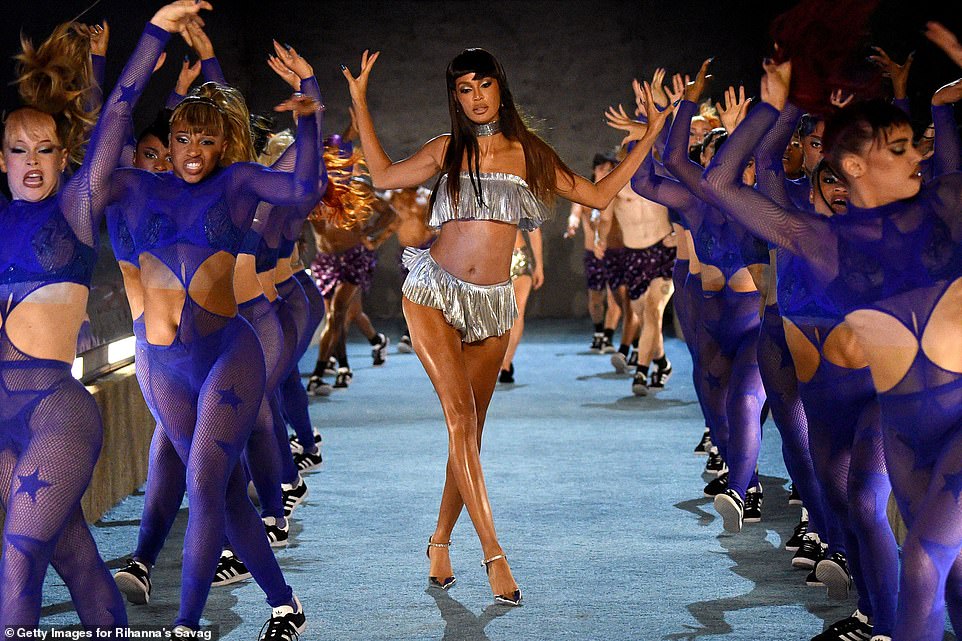 Force: Joan Smalls sizzled  as she emerged in a chromatic crop top and matching mini skirt 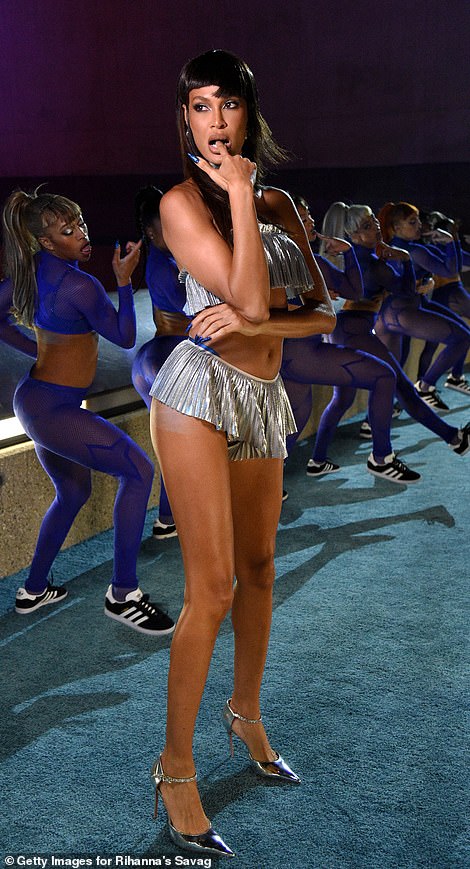 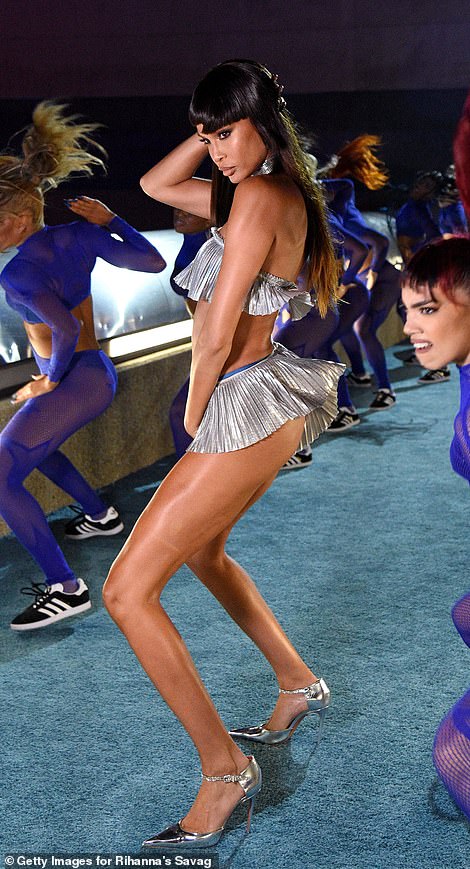 Party time! The 33-year-old supermodel clearly had a blast, often breaking out into dance while surrounded by her squad

Killing it: Smalls oozed sex appeal by accessorizing with a thick choker necklace and a pair of stiletto heels

She told Vogue.com: ‘Men of all different sizes, different races. I think men have been left behind in terms of inclusion and curves.’

Savage X Fenty Show Vol. 3., which premieres Friday on Amazon Prime Video, is the third runway show by Rihanna and will debut the brand’s latest collections. 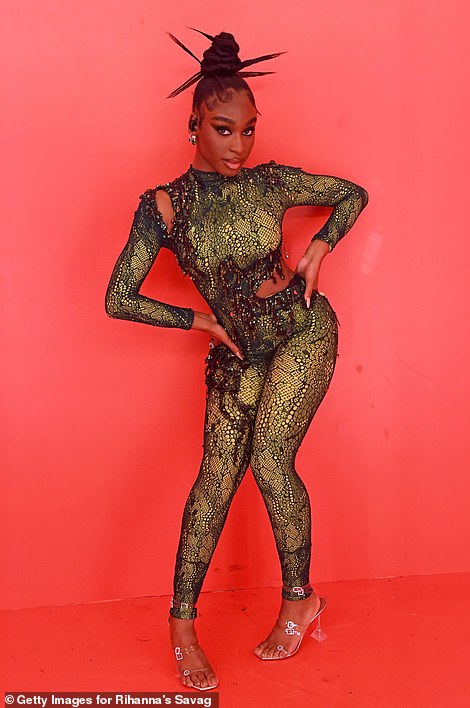 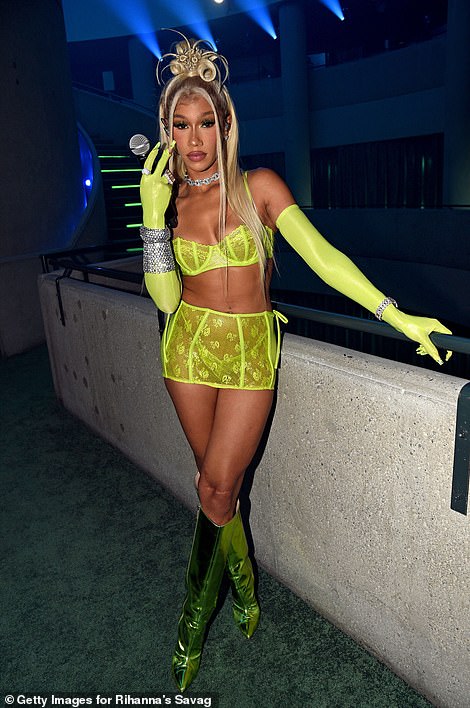 Pop divas: Normani and BIA stunned as they treated fans to their musical stylings 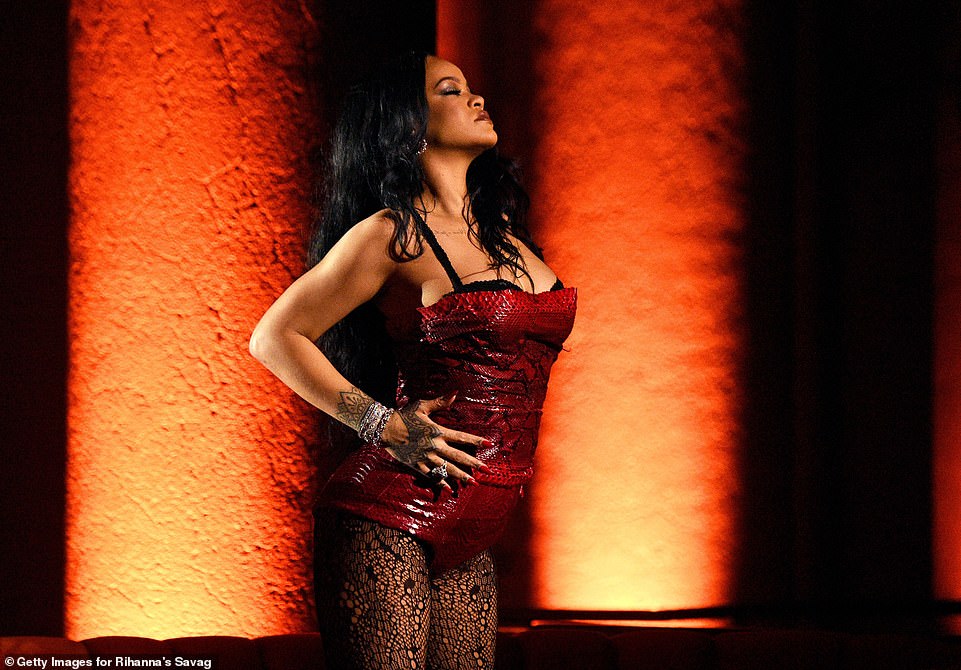 Hot! The 33-year-old mogul posed with her back arched and her manicured hands on her hips as she let her audience gaze at the elements of her bedroom-ready ensemble

Switch up: She also appeared in a semi-sheer outfit made of black tulle and lace 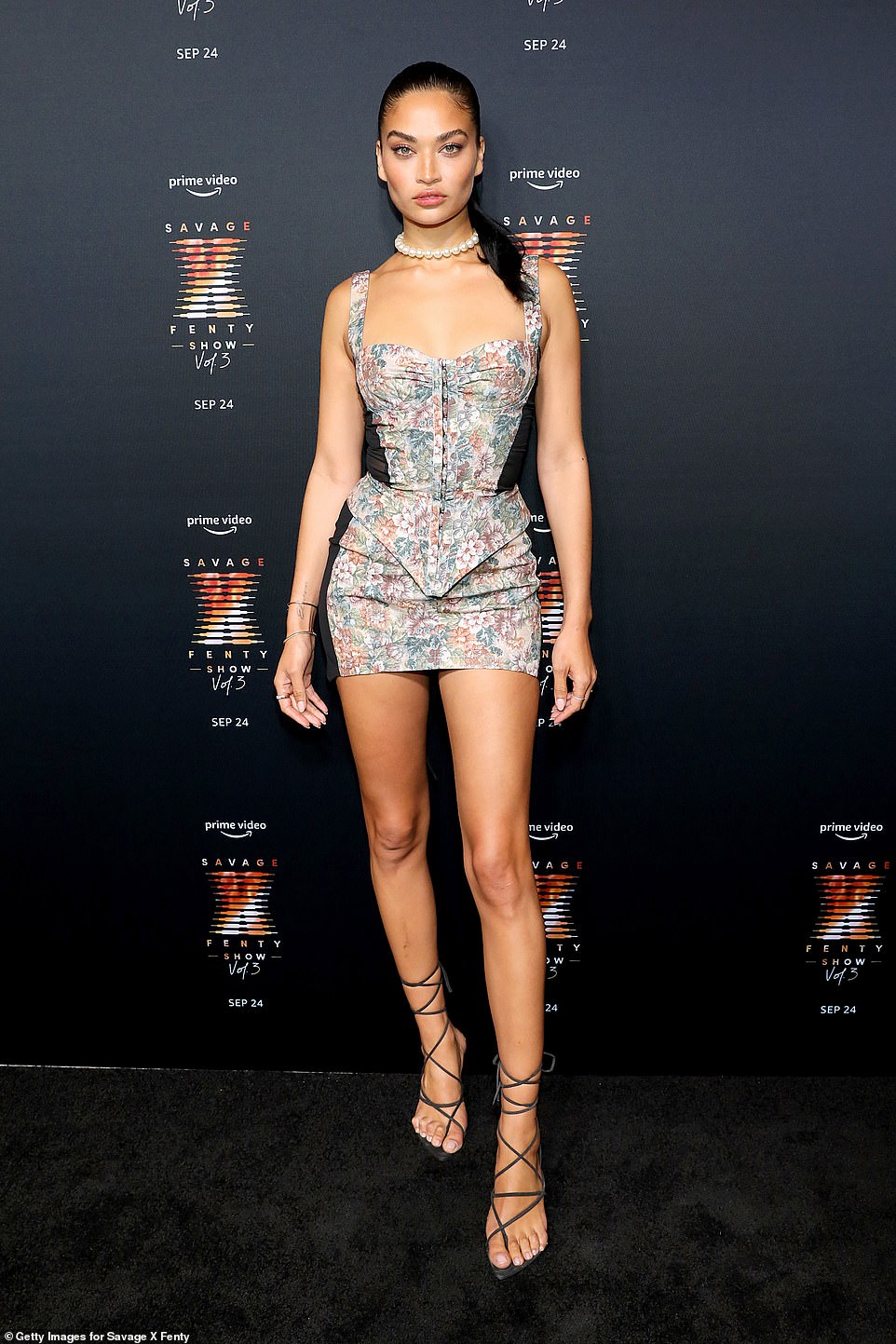 Raising hemlines! Shanina Shaik showed off her long legs in a VERY short floral skirt at the premiere of Rihanna’s Savage X Fenty Show in New York on Wednesday evening