Richmond has been issued with a ‘please explain’ notice and the AFL Integrity Unit could become involved after Tigers coach Damien Hardwick allegedly abused Williamstown players in their VFL clash at Punt Road at the weekend.

It was a comfortable 55-point win for Richmond’s VFL side, played on a sodden Punt Road pitch where the Tigers held Williamstown to just two goals in their 10.14 (74) to 2.7 (19) victory.

But the result was soured by the alleged exchange that occurred minutes into the first quarter.

A Williamstown official told the Herald Sun that several fans were present for the incident while spectators said Hardwick was going ‘off his head’.

‘He verbally abused one of the Williamstown players ­because of a hit early in the first quarter … there was some sort of verbal altercation with “Dimma” verbally abusing the player,’ the official said.

Another eyewitness claimed Hardwick ‘went off his head in front of about 70 people’.

‘He branded two players ‘weak f—ing pricks’ and said to them ‘come over here and I’ll show you how tough you are’,’ the spectator told the Herald.

Richmond has denied that Hardwick used those words. 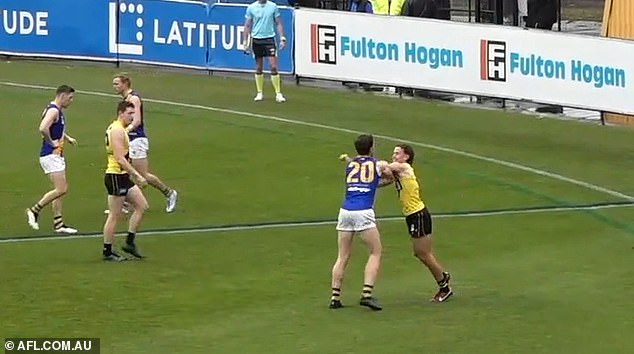 The club is seeking an explanation from Richmond after the embarrassing exchange, which could also be examined by the AFL.

Tigers officials did not comment on whether Hardwick would be fined or sanctioned for his alleged behaviour. 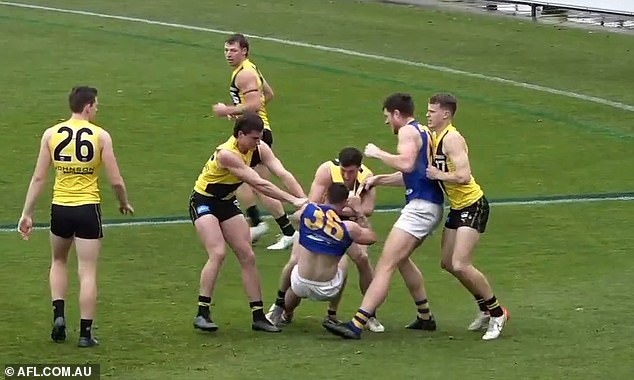 Williamstown teammate Joel Ottavi came in to remonstrate with Mansell before Henderson got to his feet and knocked Mansell to the ground.

That led to a series of pushing and wrestling between players from both sides and ultimately a free kick to Richmond for rough conduct.

The on-field microphones did not pick up any of the alleged comments made by Hardwick. 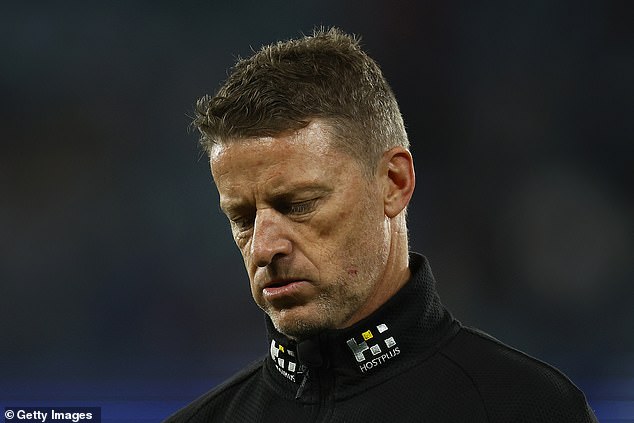 Hardwick was at the ground and the club has confirmed he was involved in an exchange of words, but deny he used the language that spectators and officials reported

Several voices could be heard from the side line making aggressive remarks in the play immediately after the incident, but it was not clear enough to discern what was said or who was saying it.

Richmond released a statement about the incident.

‘The club acknowledges there was an exchange of words following an incident in the first quarter which led to a Williamstown player being reported for rough conduct,’ Richmond said.

‘As far as the club is concerned, that is the end of the matter.’

Hardwick has previously been investigated by the AFL Integrity Unit over a verbal altercation with Adelaide Crows supporters in 2018.

In that incident, Hardwick was walking down the stairs from the coach’s box to the oval after his side had been beaten by 36 points in their grand final rematch against the Crows at Adelaide Oval.

He stopped in his tracks after hearing a comment from a Crows supporter and was involved in a verbal stoush, also feigning a headbutt to intimidate the supporter and his mate.

Hardwick then singled the supporter out to security.

After investigating the incident the AFL Integrity Unit decided there was no need for further action to be taken.