The least surprising story yesterday was the news that almost one million burglaries have gone unsolved in the past five years.

My immediate reaction was: Is that all?

It’s long been an open secret that the police don’t bother investigating break-ins. Some forces admit they will only send a copper if the intruder is still on the premises.

Even that doesn’t apply in London, where criminals responsible for 90 per cent of burglaries can expect to get away with it.

A couple of years ago, our house was burgled while we were on holiday. A fairly sophisticated alarm system proved no deterrent.

But it did alert the local security patrol, which our suburban community pays for because the police gave up even pretending to protect us years ago.

Their man was on the scene within minutes, along with my son who lives nearby. The security guard realised the burglars were still inside and called the cops. He was told to check it out himself, since the police were far too busy to attend. Quite rightly, he told them it wasn’t his job to put himself in harm’s way.

Two-and-a-half hours later, the police eventually turned up, by which time the burglars were long gone. A cursory forensic follow-up the next day failed to unearth any clues to their identity.

We were lucky, in the scheme of things. We weren’t at home and the damage was fairly superficial. A couple of doors kicked in, but nothing taken. The swift arrival of the security guard had obviously spooked them and they had legged it empty-handed.

We came home to find muddy footprints everywhere. That wasn’t the burglars, my son explained, it was the bobbies, who saw no need to wipe their feet. There was also a letter informing us that the police were taking NFA (No Further Action) and the case was now closed.

The response was not so much NFA as SFA (Sweet Fanny Adams, to put it politely).

As I said, though, we got away lightly compared to many other victims. Our insurance company sent an emergency carpenter to secure the property and the doors were replaced within a few weeks. I’m sure many of you can relate much worse experiences of burglaries compounded by police indifference.

It may seem irrational, but to be honest I was as angry at the police as I was towards the burglars. It’s not as if the Old Bill were unaware that there was a gang of house-breakers operating in the area. Our next-door neighbours had been turned over a few days earlier.

A regular panda car patrol might have scared off potential intruders. But they’re even rarer round here than fans of Spurs chairman Daniel Levy.

To make things worse, the constabulary no longer consider the protection of private property any part of their remit.

This deliberate dereliction of duty has been going on for years. The day we moved into our current home in North London 24 years ago, one of our first visitors was the neighbourhood home beat bobby, a proper old-fashioned Dixon Of Dock Green character.

I made him a cup of tea and told him he was welcome to pop in any time. Unfortunately, he said, this would be the last I’d see of him.

He was being pulled off the beat and relocated to divisional headquarters several miles away, where no doubt he spent the remains of his career gawping at CCTV monitors or trawling the internet for ‘inappropriate’ comments which could then be recorded as a ‘hate incident’.

Around the same time, the nearest police station to our house closed to the public. Shortly afterwards, a student was stabbed to death on the steps of that nick, a casualty of the callous disregard police chiefs have for any concept of traditional public service.

They don’t even consider burglary to be a crime any more and haven’t done since the late 1980s, when I wrote a column in London’s Evening Standard about the introduction of a system designed to screen out crimes thought unworthy of investigation.

For the record, I don’t blame the rank and file, most of whom joined The Job with the best intentions and who are prepared to put their lives on the line daily. Nor do I blame the inspectors and sergeants juggling duty rotas. The guilty men and women are the posturing top brass — brainwashed by the Left-wing outfit Common Purpose — who are more interested in playing politics than policing the streets.

It’s a question of priorities. Most of us consider burglary an especially serious crime, a violation of where we live. I’ve heard women compare being burgled to being raped.

Not so the new breed of senior officers. Thief-taking is no guarantee of advancement in the modern police force. The way to get ahead these days is to spout fashionable nostrums about diversity.

Burglary comes a long way down the list behind taking the knee in supplication to the Black Lives Matter mob; painting their nails in rainbow colours to show solidarity with the trans lobby; flying the LGBTQWERTY+ flag above HQ; skateboarding with climate change extremists; and making fatuous, self-serving statements on the steps of Scotland Yard about the murder of George Floyd thousands of miles away in another country.

We never did find out what was more important than rushing to arrest the gang who burgled our house while they were still on the plot. But it’s an incontrovertible fact that there are more brownie points to be gained recording ‘non-crime hate incidents’ than feeling the collars of career criminals.

Home Secretary Priti Flamingo is making all the right noises and the Government is pledged to recruit another 20,000 more police officers.

But until there is a fundamental change in the culture and mindset at the top of the force, they could hire another million coppers and still burglars would be free to go about their unlawful business without fear of capture or prosecution.

Mind how you go.

In the wake of the cash-for-curtains furore, former Labour Chancellor Alistair Darling is reported to have turned down the chance to head up a charitable trust to pay for refurbishments in Downing Street, so that in future everything is seen to be above board.

Probably wise. I’m sure that Darling wouldn’t want the world reminded that when he was an MP and occupied Number 11, he ‘flipped’ the address of his second home no fewer than four times, allowing him to claim thousands of pounds in taxpayers’ cash towards the cost of his house in Edinburgh and a London flat.

Oh, well, back to the Lulu Lytle drawing board. 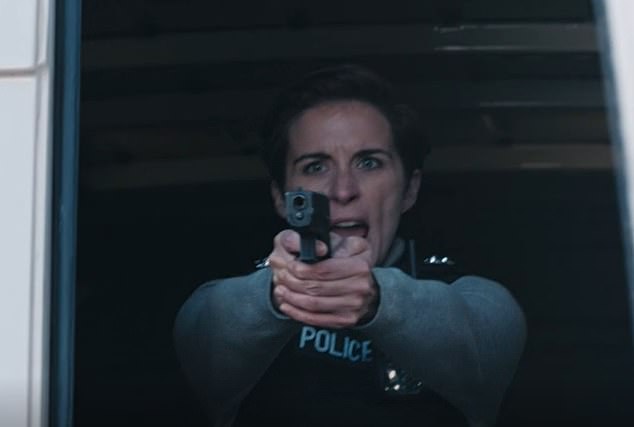 There’s another seven hours of my life I’ll never get back. Sorry, but the latest series of Line Of Duty was laughable, almost a parody of itself. Compared to the brilliant American corrupt cop show The Shield, currently on Amazon Prime, LoD was strictly amateur hour.

Now there’s talk of AC-12 returning for yet another series. As George Carter used to say to Jack Regan in The Sweeney:

Just when you thought it was safe to go back on the golf course, along comes another threat — direct from Creepy-Crawly Corner.

Greens are being damaged by larvae laid by crane flies, which are proving resistant to new eco-friendly pesticides.

They are known as leatherjackets, which makes them sound like a biker gang. Unless checked, they could soon multiply and pose a wider threat to society. 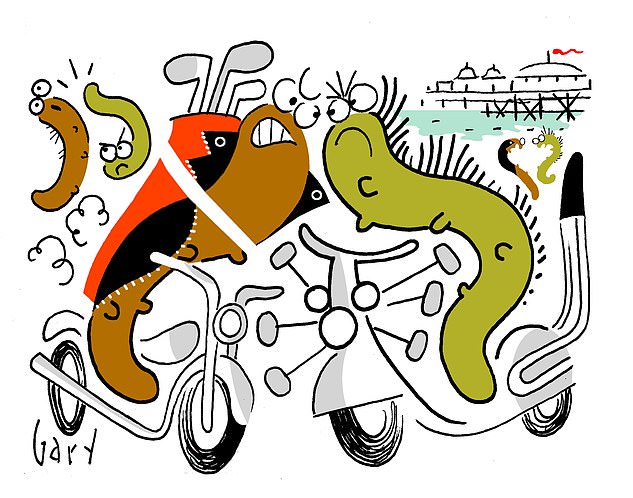 They are known as leatherjackets, which makes them sound like a biker gang. Unless checked, they could soon multiply and pose a wider threat to society

Next bank holiday, we could see gangs of leatherjackets heading down to Brighton on Triumph Bonneville motorcycles, before clashing on the beach with rivals such as the Oak Processionary Mods and the (Lesley) Ash Moths, straddling the pillions of chrome-plated Lambrettas.

That would really put the Sting in Quadrophenia. How long before the Depressed River Mussels shake off their depression and start flexing their muscles, too? Never mind golf courses, it’s a jungle out there!

A fish and chip shop in East Kilbride, near Glasgow, has come up with the ultimate Scottish delicacy — a battered, deep-fried Colin The Caterpillar cake. Beats the hell out of deep-fried Mars Bars, which were all the rage a few years ago.

I can remember seeing a sign in the window of a chippy, handily located next to a sweet shop, in the village of Houston, west of Glasgow airport.