What kind of country have we become? A 73-year-old retired nurse was arrested and handcuffed after taking her mother out of a care home.

Ylenia Angeli was detained by police in a car park while her bewildered mum, Tina Thornborough, aged 97, looked on.

This outrageous incident was caught on video by Mrs Angeli’s daughter, Leandra Ashton, and posted on the internet.

During a visit to the care home, where they were only allowed to see Mrs Thornborough through a window, the two women were distressed at how much she had visibly deteriorated.

They decided to remove her and take her to Mrs Angeli’s house, so she could be looked after by her own family.

Ylenia Angeli was detained by police in a car park while her bewildered mum, Tina Thornborough (pictured), aged 97, looked on

The care home, in Market Weighton, Yorkshire, called the police and they were eventually tracked down to a nearby garden centre car park, where Mrs Thornborough was enjoying a coffee and a cream cake. Mrs Angeli was handcuffed and forced to sit in the back seat of a police car. The cuffs weren’t removed until they had been driven back to the home.

The video footage is harrowing. Miss Ashton, an actress who has appeared in Coronation Street, can be heard sobbing and arguing with the police.

She insisted nothing was pre-meditated. After care workers refused to allow Mrs Thornborough to go outside, her daughter took matters into her own hands. In defiance of Covid restrictions she commandeered a wheelchair and broke for the border, brushing aside the staff’s attempts to stop her.

For the first time in nine months, they could hug. ‘I was able to put my arms around my mother and tell her how much I love her,’ Mrs Angeli said.

She’s convinced her mum’s lack of physical contact with her daughter and granddaughter contributed to her health going downhill. Mrs Thornborough was returned to the home, against Mrs Angeli’s wishes, after a spell in hospital in the summer.

‘I want to care for her myself. If she’s at home with me, I can see her every day and give her everything she needs. I’m a trained nurse and had my own care home, so I know what I’m doing. I have a lot of experience looking after the elderly.’

But under the conditions imposed when Mrs Thornborough was admitted to the care home, her family now have no say over her welfare. It’s a story which will resonate with tens of thousands of people who find themselves in the same boat. Families are being ripped apart by the official reaction to the pandemic. No wonder we’ve got a mental health crisis. 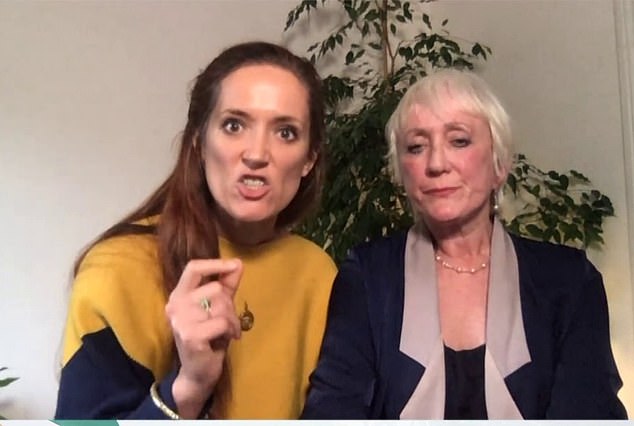 This outrageous incident was caught on video by Mrs Angeli’s daughter, Leandra Ashton (pictured together), and posted on the internet

The Government’s initial policy on tackling Covid in care homes was bungled horribly.

Originally ministers insisted the homes were safe, a fatal miscalculation which led to an excessive number of deaths.

If anything was ‘killing Granny’ — to quote our callous, self-satisfied Health Secretary Matt Hancock — it was the Government’s decision to decant elderly patients out of hospitals into care homes.

So now all physical contact between family members and their loved ones in care homes is banned. Visitors are reduced to staring at their elderly relatives through glass, as if they were exotic fish in an aquarium.

Outdoor visits are permitted in some instances, but no touching is allowed.

Sons, daughters and grandchildren can only stand and stare in despair as their beloved parents and grandparents are condemned to spend what remains of their lives in virtual solitary confinement. 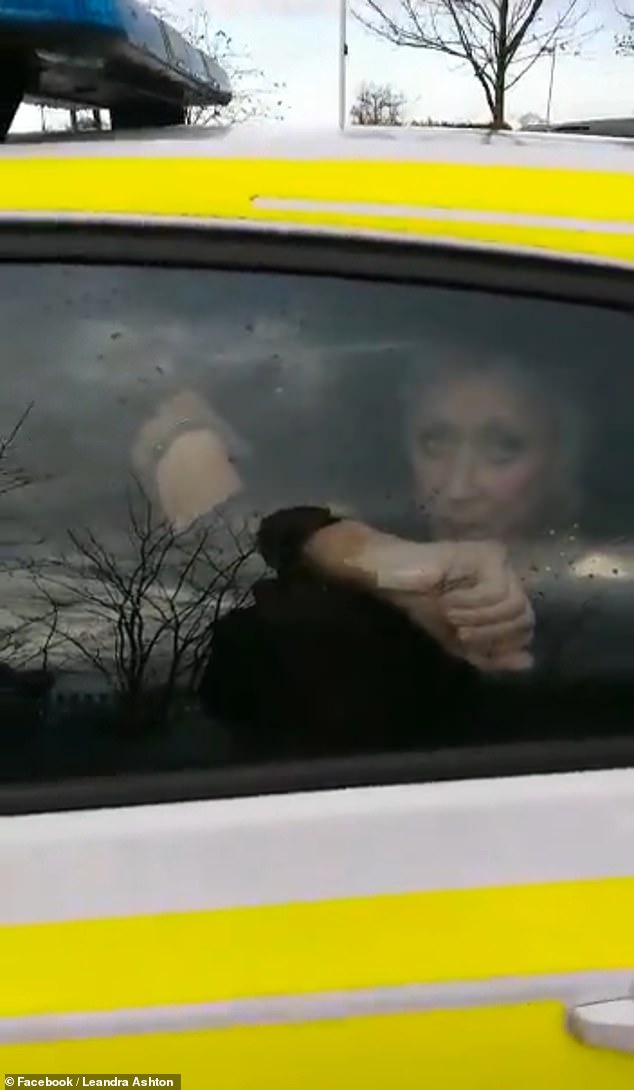 During a visit to the care home, where they were only allowed to see Mrs Thornborough through a window, the two women were distressed at how much she had visibly deteriorated. Pictured: Mrs Angeli in a patrol car

In a heartbreaking interview with Nick Ferrari on LBC radio, Miss Ashton spoke for Britain. ‘We need to challenge the worst virus in this country, which is fear. We are not thinking rationally, we’re focusing on one illness.

‘This narrative of fear, of shutting down and shutting up and staying safe, needs to shift to living life, not saving life.’

Mrs Angeli added: ‘The collateral damage that’s done to families across the country is huge. Families are falling apart. It’s destroying us.’

Amen to that. But the reaction of the police is equally, if not more, scandalous. Mrs Angeli said of her arrest: ‘I just thought this can’t be happening. It was absolutely horrible.’

Why the hell was she handcuffed? She’s a 73-year-old retired nurse, not the Yorkshire Ripper. And why was it necessary to keep her restrained during the drive back to the care home. What did they think she was going to do?

When two black athletes were detained and handcuffed after their car was stopped by police in North-West London in the summer, there was a national outcry, led by the BBC. It sparked a formal inquiry into potential misconduct by the officers involved.

The treatment of Mrs Angeli deserves no less of a response. The fact that she was later de-arrested is irrelevant.

This was a naked abuse of police power. And sadly we can expect more of it over the next month.

During the first lockdown, some forces behaved abominably, sending up drones to spy on ramblers, threatening to arrest sunbathers and so on.

Second time around, they’re already promising to get tough on people who break the rules and are being egged on by Home Secretary Priti Flamingo.

With her predecessor Jacqui Smith reduced to twirling away on Strictly, it’s Priti’s turn to pull on the old jackboots.

Thanks to Covid, the Old Bill are now encouraged to think of themselves not as public servants but as our jailers.

Policing by consent doesn’t come into it any more, unless you are planning to stage a Black Lives Matter demonstration or invite 200 people to the funeral of a much-loved member of the travelling community. In which case Plod will turn a blind eye.

I might have been prepared to give Humberside police the benefit of the doubt, until I remembered it’s the same force which recorded an alleged ‘transphobic’ tweet by an ex-copper as a ‘hate incident’ and sent an officer to warn him he may be prosecuted unless he moderated his ‘thinking’.

How many more times? If you give anyone any authority, especially if it comes with a hi-viz uniform, they will always, always abuse it.

Even if that extends to arresting and handcuffing a 73-year-old woman whose only crime is to love her 97-year-old mother and want to look after her.

This is the kind of country we have become.

The Poppy Appeal traces its roots from the Second Battle of Ypres in 1915, taking inspiration from the poem In Flanders Fields which commemorates the fallen soldiers of World War I.

The poppy itself is a poignant symbol. But in recent years different versions have started to appear, bearing the logos of football clubs and other organisations. Politicians from the SNP and Plaid Cymru sport poppies mounted on saltires and Welsh dragons.

Why? The poppy is supposed to salute service men and women, not advertise political parties or allegiance to Aston Villa, Chelsea or any other Premier League team.

Those who insist vainly on wearing these tacky badges need to be reminded that Remembrance Day is about the sacrifices of others, not about them.

Both are wearing Covid-safe face masks.

That should narrow the number of suspects down to about 50 million.

Mind how you go.