EXPRESS INFORMER > News & Politics > RICHARD LITTLEJOHN: Back to school, back to work – and back to the future…

First the good news. The Old Normal is making a comeback. It’s beginning to look a lot like February 2019.

Traffic jams are clogging roads into London, Birmingham and Liverpool and trains are being cancelled because of staff shortages and signal failures.

Bleary-eyed commuters are trudging into their offices, some for the first time in 18 months. The end of the school holidays has sparked an encouraging return to work.

Now you might not immediately conclude that being stuck in a three-mile tailback on the A12 or crammed into a crowded, late railway carriage is a cause for celebration.

There are some reasons to be cheerful. A Mail survey of the country’s 18 biggest firms, who between them employ 500,000 people, revealed that they expect half of their staff to be in the office by the end of this week 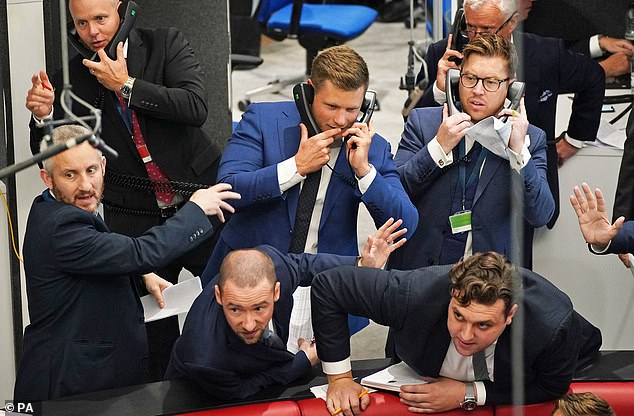 But, trust me, these are the first optimistic signs that Britain is finally awakening from its long, debilitating Covid coma. And not before time. The economy simply couldn’t survive another six months of paralysis.

Our city centres are already on the critical list. Figures from the retail sector published yesterday showed more than 8,700 shops have gone bust this year alone, a rate of almost 50 a day.

There are some reasons to be cheerful. A Mail survey of the country’s 18 biggest firms, who between them employ 500,000 people, revealed that they expect half of their staff to be in the office by the end of this week.

That should increase footfall on the High Street and throw a lifeline to small businesses such as coffee shops and pubs, which have been crippled by Covid lockdowns.

So congratulations to all those who defied the prophets of doom and headed back to their desks yesterday. We can only hope that millions more follow suit over the next few weeks.

OK, so the drift back to work is gradual and patchy. In cities such as Leeds, Manchester, Newcastle and Sheffield commuter traffic is still well below pre-pandemic levels. 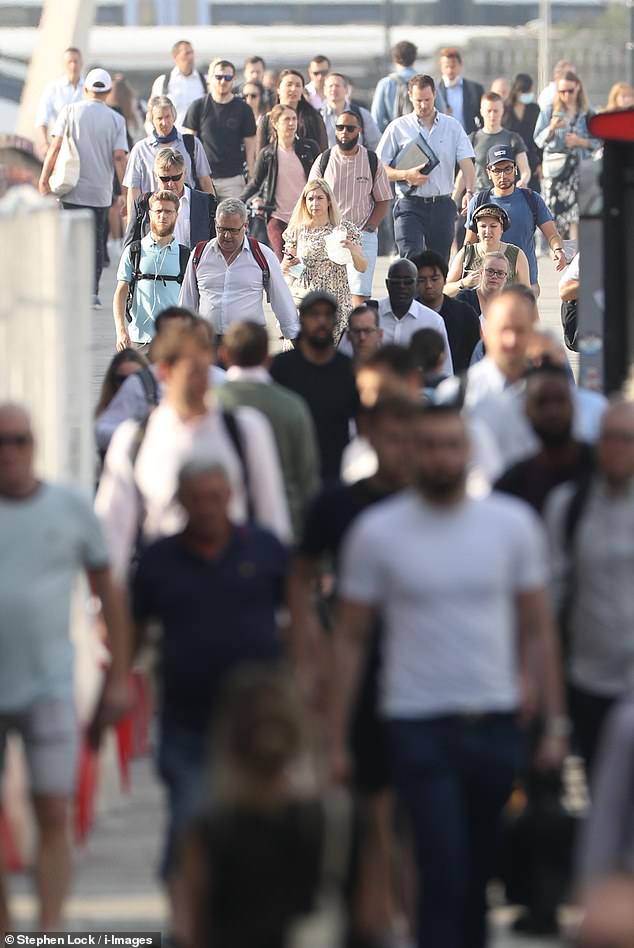 There’s no shortage of opportunities. The CBI reports that there are almost 1.7 million vacancies across a range of industries, from hospitality to road transport

With a fair wind, though, that should change as we head into autumn, especially when the furlough scheme stops at the end of this month and the last 1.9 million recipients realise that the Government is no longer prepared to pay them to sit at home watching daytime TV and eating Hobnobs.

Some of them will discover they don’t have a job to go back to. The big question is whether they are prepared to retrain for a new career, after a year and a half of enforced idleness.

There’s no shortage of opportunities. The CBI reports that there are almost 1.7 million vacancies across a range of industries, from hospitality to road transport.

Employers are going to extraordinary lengths to recruit staff. They are offering a series of enticing perks, including flexible working and signing-on bonuses of £1,000.

But even this is not enough for some self-obsessed, woke millennials, who have developed an acute and unwarranted sense of entitlement.

One Human Resources professional explained: ‘You used to tell candidates: ‘You’re employed in this office, for these hours, on this salary. The end.’ Now candidates are coming up with all sorts of questions before deciding to take the job.’

These include: Can I work from home, or abroad? Is the food free? Are there places to relax? Will you pay my travel costs? What is your mental health policy?

To which the answers should be emphatically: No, no, no, no, haven’t got one. 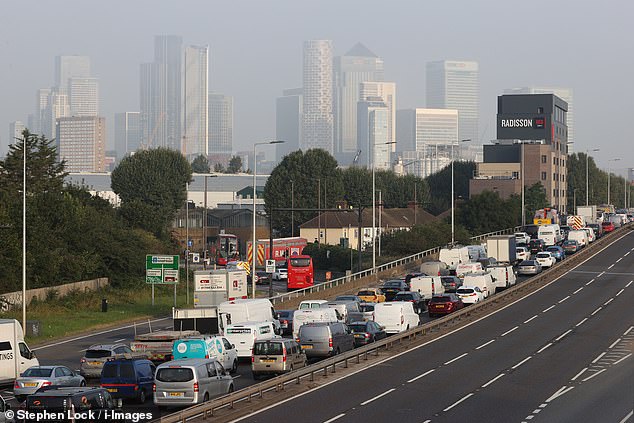 Employers are going to extraordinary lengths to recruit staff. They are offering a series of enticing perks, including flexible working and signing-on bonuses of £1,000

Businesses exist to serve their customers and make a profit. Of course, they should treat staff properly. But where did anyone get the impression that the primary role of any business is to mollycoddle its employees?

Some companies, either because they are desperate to hire staff on any terms or wish to appear down with the kids, go along with this madness.

As I reported back in June, NatWest, Microsoft, BP and Santander have started ripping out desks and turning their headquarters into ‘social spaces’, complete with sofas, bars and relaxation areas. They are even giving away free ice creams.

Some are installing day beds to allow staff to have a quiet lie-down when the stress gets to much for them. Not so much woke, as fast asleep.

Of course, there’s nothing new in this. Back in the Dark Ages when newspapers were based in Fleet Street it wasn’t uncommon to find reporters head down on their typewriters, snoring away merrily, after a long liquid lunch.

But it never occurred to their editors to install special sleep pods, or provide them with pillows and aromatherapy candles to make them more comfortable.

At least the private sector is trying to get staff back into their offices, even if it means carrot, compromise and allowing the limited continuation of working from home.

Many firms have agreed to a mix-and-match approach, with employees doing two or three days in the office and Zooming in the rest of the week. If it works for them, fine. It’s their bottom line.

There’s no such urgency in the public sector, where staff are content to stay at home for ever and ministers lack the courage to order them back to work. Yesterday, as cities started stirring back to life, Whitehall was once again deserted. Civil servants, with the full support of their unions, are refusing to go back to their desks.

A few weeks ago, the Chancellor Rishi Sunak was insisting it was imperative staff returned to normal. Yet now we learn the Treasury is advertising jobs which will allow people to carry on working from home.

The Bank of England is just as bad, with staff being told they don’t have to turn up even one day a week. And these are the two Government departments charged with reviving the economy.

What kind of example does that set? Surely the Government should be giving a lead.

At this rate it can only be a matter of time before the Bank of England shuts altogether and is replaced by an ATM, like every other bank in Britain. If it could be shown that WFH does not interfere with the smooth running of the country, fine. But all the evidence points to the contrary.

There are horrendous delays for everything from passports and driving licences to tax rebates.

When it comes to those responsible for basic public services, WFH isn’t working. The country is being run entirely for the benefit of civil servants, not the rest of us who pay their index-linked, inflation proofed wages.

No doubt those still enjoying the luxury of working from home think they’ve never had it so good. But they should be careful what they wish for. In the U.S. companies are installing surveillance software called ‘Sneek’ on computers to keep an eye on staff.

Known as ‘tattleware’, it monitors their every movement, every keystroke, email activity and websites visited during working hours. Already there are squeals about ‘invasion of privacy’.

One techie said: ‘I signed up to manage their digital marketing, not to livestream my living room.’

But if they are a full-time employee and designate the living room as an official workplace, it’s difficult to object.

They wouldn’t be able to sit in an office in their underwear or slope off to the pub with their laptop. If they’re being paid to work 40 hours, five days a week, then surely the boss is entitled to monitor how they spend their time.

It’s only a matter of time before Sneek catches on here and someone is sacked for playing online poker or watching College Girls Gone Wild during working hours.

And it will serve them right. While white collar staff, for want of a better expression, have been enjoying a privileged life sitting at home on full salaries, manual workers such as delivery drivers and supermarket shelf stackers have been going flat out as usual during the pandemic.

With 80 per cent of the country double-jabbed, and Covid no longer posing a mortal threat, there’s no justification for anyone still refusing to go back to work.

Ministers must grasp the nettle and order all civil servants to return to their offices by the end of September at the latest, or face the sack.

It’s time to junk the New Normal and welcome back the Old Normal with open arms.