Viewed from a distance, Castle Howard looks as grand and graceful as ever. But for the family whose home it has been for centuries, it also stands witness to a run of domestic dramas and crises — perhaps none more unsettling than that which emerged yesterday.

News that the man who ran the stately pile in North Yorkshire for 30 years has been charged with two counts of child sex offences involving a girl under 14 is yet another shattering blow.

To anyone of a superstitious nature, it might appear that a curse has been laid on the 18th-century mansion, designed by Sir John Vanbrugh, which served as a backdrop for the TV series Brideshead Revisited and, more recently, was Clyvedon Castle, seat of the Duke of Hastings, in the Netflix hit Bridgerton.

A former High Sheriff of North Yorkshire, Simon Howard and his second wife, Marks & Spencer heiress Rebecca Sieff, presided over the castle’s 9,000 acres, its temples, follies, peacocks and staff, plus a family fortune once valued at £50 million, with a benign pride.

But their tenure was abruptly curtailed seven years ago after a family argument that saw his elder brother Nicholas, 68, taking over and his business-savvy wife Victoria, a former chief executive of publishing giant HarperCollins, installed as chatelaine.

A former High Sheriff of North Yorkshire, Simon Howard and his second wife, Marks & Spencer heiress Rebecca Sieff, (pictured) presided over the castle’s 9,000 acres, its temples, follies, peacocks and staff, plus a family fortune once valued at £50 million, with a benign pride

The departure of Simon and Rebecca sent shockwaves through the British aristocracy and the estate, which has been home to ten generations of Howards and which, before the pandemic, attracted 250,000 visitors a year.

At the time, observers likened the manner of their leaving and the family drama that followed to the biblical tale of Cain and Abel.

But the loss of Castle Howard seems a mere detail alongside the catalogue of personal disasters that have beset Simon and Rebecca ever since.

In an interview three years after they had moved out, Rebecca spoke of her ‘shock and rage’ at their treatment and told how, whenever she drove past Castle Howard, ‘a shudder goes through me, as though someone were walking over my grave’.

At the time, Simon had been diagnosed with cancer of the throat but made a startling recovery after intense radiotherapy treatment.

Despite the upheaval, the couple, who have 19-year-old twins, settled into a more modest home, Welham Hall, also in North Yorkshire, and set about its renovation with relish.

Simon, an art consultant for Sotheby’s, also threw himself into his work as president of the Police Treatment Centres charity in nearby Harrogate.

‘Any police officer who has been injured in the course of duty can use this facility for their recovery,’ he explained. ‘It has swimming pools, cycling rooms and physiotherapy. It means they can recover and get back to work more quickly.’

But this was a blessed interlude. And while some may scoff at talk of a family curse, the Howards have certainly been no strangers to misfortune.

Last February, I can reveal, Simon fell heavily down a steep staircase at Welham, suffering a brain haemorrhage. He was rushed to Hull Royal Infirmary’s intensive care unit and placed in an induced coma, then transferred first to York Hospital and then to the city’s Woodlands Neurological Unit. 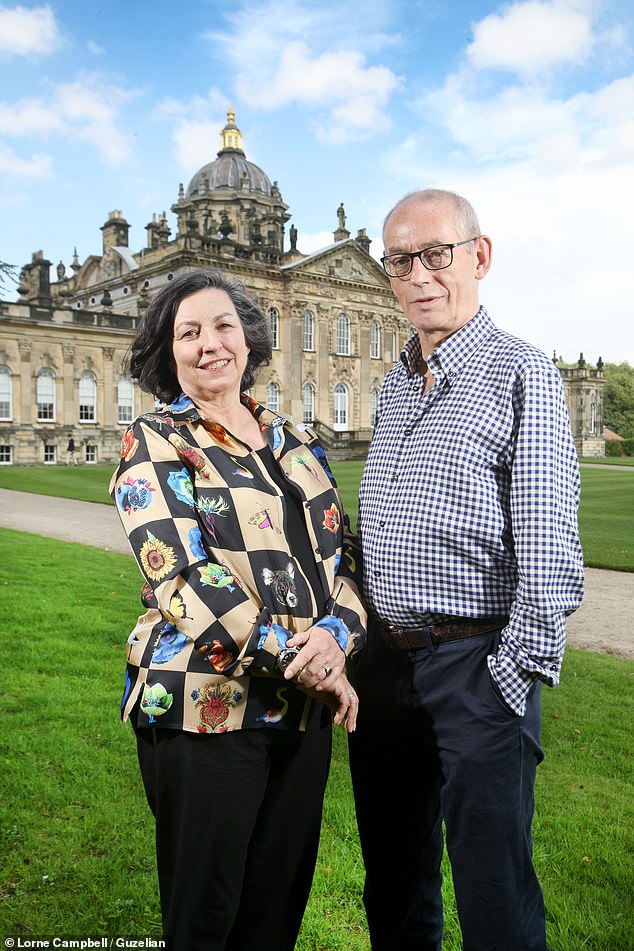 But their tenure was abruptly curtailed seven years ago after a family argument that saw his elder brother Nicholas, 68, taking over and his business-savvy wife Victoria, a former chief executive of publishing giant HarperCollins, installed as chatelaine

He was in hospital for six months. Twice his wife was summoned to his bedside when doctors feared he would not survive another night.

But if his recovery was miraculous, it was not the end of his health problems. Discharged from hospital in October, Howard, 65, then contracted Covid-19. Friends say he is now a shadow of his former self and has difficulty concentrating.

And now comes news of a police investigation. According to a family statement, Simon was interviewed under police caution in July 2018, has been charged under the Sexual Offences Act and is due to appear before magistrates in Scarborough on Monday.

The statement says the two charges he faces, of indecent assault and incitement to commit an act of gross indecency, relate to a single incident alleged to have taken place 37 years ago in 1984, when Mr Howard was married to his first wife.

‘Simon Howard’s whole family are shocked by these allegations and are fully supportive of Simon Howard’s confidence that he is innocent of all charges — which he denies in the strongest possible terms,’ the statement said.

But for a twist of fate, Simon might never have run Castle Howard, which was catapulted into the public eye by the TV adaptation of Evelyn Waugh’s novel Brideshead Revisited in 1981, starring Jeremy Irons, Anthony Andrews and Diana Quick.

As he was the third of former BBC chairman Lord (George) Howard’s four sons, the obligation might have fallen to his eldest brother Henry. But he had a medical condition and was unable to take it on; Henry died in 2008. Instead, on his father’s death in 1984 it fell to Simon, who later said: ‘I was brought up here and I have made it my life’s work.’

Castle Howard, with its landmark painted and gilded dome, contains a priceless collection of antique furniture, porcelain and sculpture. Its walls are decorated with an impressive collection of paintings, dominated by Holbein’s portraits of King Henry VIII and the Duke of Norfolk.

Simon’s first wife was Annette Smallwood, known as Scruff, who was six years his senior and had previously been the second wife of the Marquess of Northampton. Their wedding at a register office in Malton was followed by a blessing at the Castle Howard chapel. But the marriage ended after 15 years; there were no children.

Then came Rebecca, known as Becky, a great-niece of Lord Sieff, former chairman of Marks & Spencer. Her induction into North Yorkshire country life was not smooth.

Shortly after her marriage, an article in Vanity Fair magazine, penned by her one-time friend Plum Sykes, described her as ‘the woman who set out to marry a house’, claiming she fell in love with Castle Howard after watching Brideshead as a 14-year-old. 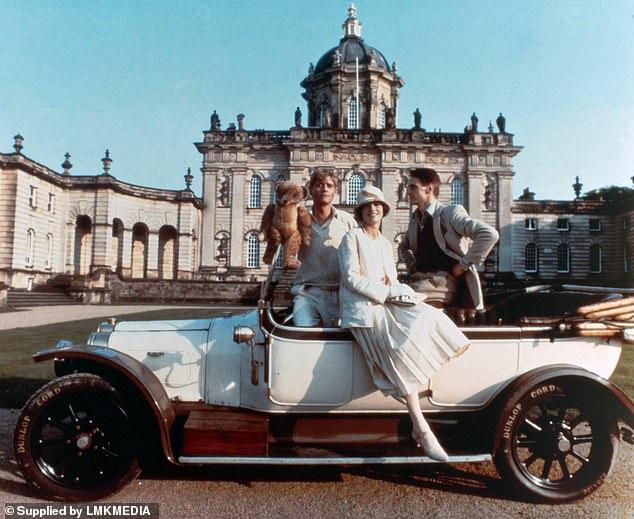 To anyone of a superstitious nature, it might appear that a curse has been laid on the 18th-century mansion, designed by Sir John Vanbrugh, which served as a backdrop for the TV series Brideshead Revisited(pictured)

‘It looked so glamorous and so wonderful and you thought, “I’m not going to end up in a s****y little house somewhere . . . I want to live there”,’ she told Sykes.

When the article appeared in 2002, not long after Rebecca had become mistress of Castle Howard, she was upset at being depicted as a calculating house-huntress. ‘I fell madly in love with Simon,’ she insisted.

But her obsession with Castle Howard was real enough. When she was a 20-year-old heiress and socialite, a glossy magazine had once asked her where she wanted to live. Her instant reply was: ‘Oh, somewhere like Castle Howard.’

She had to wait until she was 34 to achieve her ambition, only to have it taken from her 12 years later.

Rebecca, the daughter of Jonathan Sieff, a one-time racing driver whose career ended when he was almost killed crashing his Lotus at 120mph in the Le Mans 24-hour race, and his second wife, Sixties model Angela Pringle, had a privileged childhood.

Educated at Millfield, one of Britain’s most expensive public schools, she spent her holidays in villas on the Riviera and played the piano to concert standard.

When she was 21, she bought a flat in Fulham, West London, and set about having a good time. Blessed with what were once described as ‘wow good looks’, she dressed like a Thirties film star and roared around London in a TVR sports car.

Her days were devoted to long lunches, and at night she was to be found in nightclubs such as Annabel’s, in Berkeley Square.

Rebecca first met Old Etonian Simon at a Christmas Eve party at Castle Howard, where she had been taken by friends. She was 22 and ‘he was the most glamorous, most romantic man I had ever seen in my life’, she would later say. Howard, on the other hand, had no memory of her at all.

It was very different when they next met up.

‘It was like a coup de foudre,’ she said, and in Vanity Fair described how she tried to fight off temptation: ‘I thought, “Rebecca, please, just don’t get involved — this man is married”.’ But she proved incapable of following her own moral advice — and this time Howard, who was just as besotted, soon proposed.

More from Richard Kay for the Daily Mail…

Theirs was a spectacular wedding. She wore the Howard family’s Cartier tiara and a crystal-trimmed dress, and was accompanied by trumpeters.

The new mistress quickly moved to make her mark on the house, and visitors appeared to approve. Then came the shock departure. In fact the house could — indeed, should — have been Nick’s in the first place, as he was next in line. But aged 16 and determined on a career in rock music, he told his father he didn’t want it.

So while Nick set out to make it big in music, third-in-line Simon was dispatched to the Royal Agricultural College at Cirencester, to be ready to take over the estate when the time came.

Success as a singer and songwriter never materialised for Nick. The closest he got to a rock star’s lifestyle was being raided by the drugs squad when he was 21 for possessing what he has described as ‘a footling amount of cannabis’ with four other members of his group Peaches. It was 1973 and the band were living on social security, rent-free, in a farmhouse on the estate.

Nick was fined £100 and, according a family story, asked if he could pay it off over three months, only to be told by the chairman of the magistrates: ‘This is meant to be a punishment, not hire purchase.’

Eventually Nick turned to photography, at which he came to be highly regarded, especially for his portraits and landscapes. Now, aged 68, he has had several highly successful exhibitions.

His first wife Amanda, with whom he had a son George, was Derek Nimmo’s daughter. He has been married to Victoria for 28 years.

Although details of the change in the running of Castle Howard have remained confidential, it is understood that in 2014 Simon was approached by his brother and sister-in-law Victoria and asked to step down as chairman of the board that runs the house, or face being outvoted by the directors of the private company. At around the same time, Victoria joined the board.

According to friends, Simon felt he had no option but to agree, and stood down as chairman and chief executive of the company of which he and his brother were each 50 per cent shareholders.

A year later, Simon and Rebecca left the estate.

Remarkably, the disruption did not lead to a family rift.

‘My husband has shown such grace and dignity,’ Rebecca said in an interview three years ago. In fact, the Howard brothers remain close and Nick was constantly on hand when Simon was unwell.

As the family face yet another ordeal, that support will be needed as never before.