The Queen has seen many things in her 68-year reign but she will never have witnessed anything like this.

I can reveal that a three-year-old boy will be the best man at the wedding of her granddaughter Princess Beatrice.

Bea’s fiance, Edoardo Mapelli Mozzi, has asked his son, Christopher [who is known as Wolfie], to do the honours when they tie the knot at the Chapel Royal in St James’s Palace in May.

‘I can confirm that Wolfie will be best man,’ a spokesman for the couple tells me.

Bea’s fiance, Edoardo Mapelli Mozzi, has asked his son, Christopher — known as Wolfie — to be best man when they tie the knot at the Chapel Royal in St James’s Palace, writes RICHARD EDEN

Not only will he have to hand his father the wedding rings in front of the Queen and other members of the Royal Family, but he will play an important role at the reception.

‘Surely, he won’t be expected to make a speech at Buckingham Palace?’ asks a shocked courtier when I break the news to them.

Wolfie will be the youngest person to have performed a role at a royal wedding throughout the course of British history. 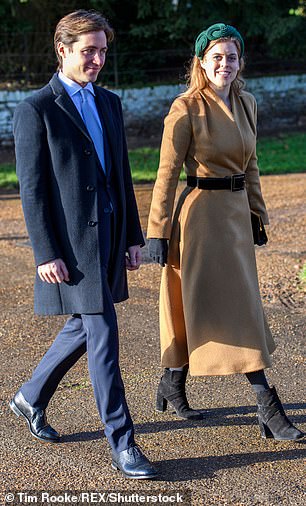 A friend of Bea and Edo says they have asked Wolfie to carry out the role because they want to show that he is loved and embraced by his stepmother, writes RICHARD EDEN

A friend of Bea and Edo says they have asked Wolfie to carry out the role because they want to show that he is loved and embraced by his stepmother.

Wolfie’s mother, the American architect Dara Huang, 37, is expected to be invited to the wedding and reception, which will take place in the gardens of Buckingham Palace, as I revealed earlier this month.

Bea’s engagement to property developer Edo, 36, was announced by the palace last September. He is the son of Count Alessandro ‘Alex’ Mapelli-Mozzi, former British Olympian and member of an Italian noble family.

The reception will be the first wedding celebration at Buckingham Palace since Prince William and Kate Middleton’s in 2011.

All three subsequent royal weddings have been in Windsor. Bea’s sister, Princess Eugenie, tied the knot in 2018 at St George’s Chapel, with a reception at the castle.

Bea, 31, will be given away by her father, Prince Andrew, in what is likely to be his first prominent role since he stepped back from royal duties.

The late Whitney Houston may have gone on tour this week in the form of a hologram, but classical star Carly Paoli is going one better by performing a duet with a singer who died more than 60 year ago. 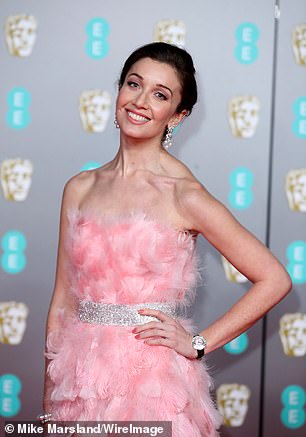 Carly, who was described by Pope Francis as having ‘the voice of an angel’ for her Ave Maria, has recorded a version of The Loveliest Night Of The Year alongside Mario Lanza, the celebrated late tenor.

She tells me of the record, which will be released next Friday: ‘It was a really special experience, performing with one of my favourite singers. I’m not sure I’d appear on stage with a hologram, though. That could be a little strange.’

The 31-year-old daughter of a Nottinghamshire lorry driver, Carly has become a royal favourite after performing a number of times for Prince Charles.

When Carly appears at the London Palladium for BBC Radio 2’s Friday Night Is Music Night next month, Lanza’s part on The Loveliest Night Of The Year will be sung by renowned tenor Joseph Calleja.

The show will be presented by Strictly Come Dancing judge Bruno Tonioli and Carly tells me: ‘I hope Bruno will give me a waltz.’ 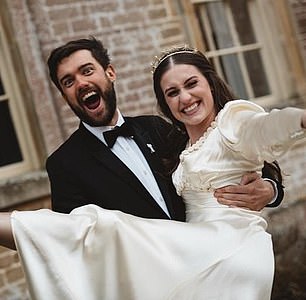 Usually it’s the groom who sweeps the bride off her feet, but comedian Jack Whitehall was the one who lifted up his sister, Molly, at her wedding, writes RICHARD EDEN

Usually it’s the groom who sweeps the bride off her feet, but comedian Jack Whitehall was the one who lifted up his sister, Molly, at her wedding.

Among the guests was the Queen’s granddaughter Princess Eugenie.

‘It was the best day ever,’ says Molly.

Her brother was deservedly teased in the groom’s speech. Jack had used the love life of his sister, who once courted Razorlight singer Johnny Borrell, for laughs when he’d been paid to give a speech to a crowd of ad executives at an awards ceremony.

Known as Mr Loophole for the skill with which he helped famous figures such as David Beckham and Sir Alex Ferguson escape motoring convictions, Nick Freeman has come up with a cunning scheme to raise money for charity.

The legal eagle is planning to walk the 60 miles between his home in Cheshire and that of his brother John, who suffers from Parkinson’s disease.

Members of the public can join him along the way and he’s offering free legal advice as they walk, in return for a donation. ‘If anyone needs free legal advice on any number of road traffic and criminal matters, I’m happy to oblige,’ he tells me.

‘Though a donation for the Parkinson’s cause would be welcome in return.’