This is the Greek boat operator arrested over the deaths of two British teenagers, killed in a parasailing tragedy in Rhodes.

Nikos Mallios, 51, has been released on bail pending a decision by prosecutors whether he should face manslaughter charges.

Jessica Hayes, 15, and cousin Michael Connelly, 13, were killed on Wednesday when the rope fastening their parachute to the vessel snapped in high winds – sending them crashing into rocks from a height of 400ft. 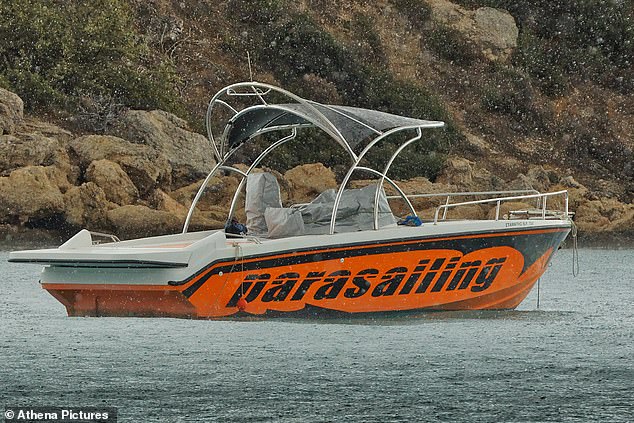 Three children aged 15-13 had been parasailing on Mallios’ boat when a sudden storm hit and tragedy struck. Today the vessel was seen (above) just yards from the spot where it happened

Cousins Jessica Hayes, 15 (centre), and Michael Connelly, 13 (left) died during the horror in Rhodes . Mikey’s brother James Connelly (right), 15, is in a critical condition in hospital

Last night it was claimed Mallios flouted health and safety laws in the lead-up to the tragedy.

The Watersports Association of Greece said it was against the rules to allow under-14s in a parachute — and that flights should be limited to two people per parasail.

The organisation’s Secretary Philip Therianos said: ‘These are rules from the government – not just guidelines. 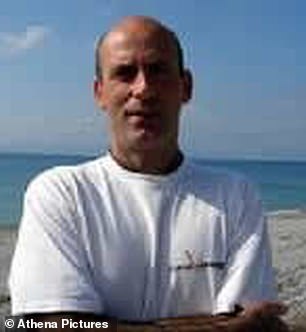 Mallios, 51, (above) has been released on bail while Greek prosecutors probe the tragedy

‘The courts will now have to decide how to enforce them in this matter.

‘As a father myself, I am devastated by this tragedy.

‘There are no words to describe the pain that the parents must be feeling.

‘We are going to discuss what we can do about this tragedy. But we already have some of the strictest laws in the world surrounding parasailing.’

The organisation is due to meet tonight to discuss the deaths.

Mr Therianos added: ‘The ropes used in parasailing typically should be able to support the weight of an elephant without snapping.

‘They are supposed to be able to take two and a half tonnes of weight.

‘Most of them can take four tonnes and parasailing accidents don’t happen very often.

‘We’ve provided statistics to government to show you are more likely to die in a plane crash.

‘Nikos Mallios was not a member of ours but I’ve heard from people who know him that he was an experienced operator.

A local boatman, who did not want to be named but runs a nearby watersports company, said every operator knows the rules.

He said: ‘How could the operator let three go up there? This rule has been in place for years and it’s to stop the rope from being overloaded.

‘Perhaps the business was suffering because of Covid, but that’s still no excuse to take three up.’ Mallios opened his Lindos Watersport Centre on the island in 2007. 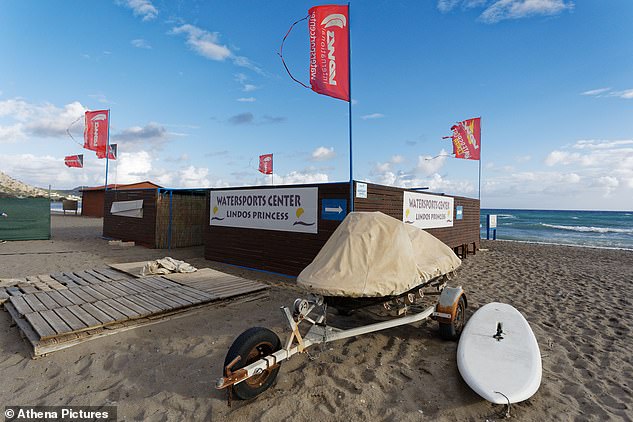 Mallios opened his Lindos Watersport Centre (pictured) on the island in 2007, catering largely tourists from a hut on the beach behind the Lindos Princess Hotel where the family stayed 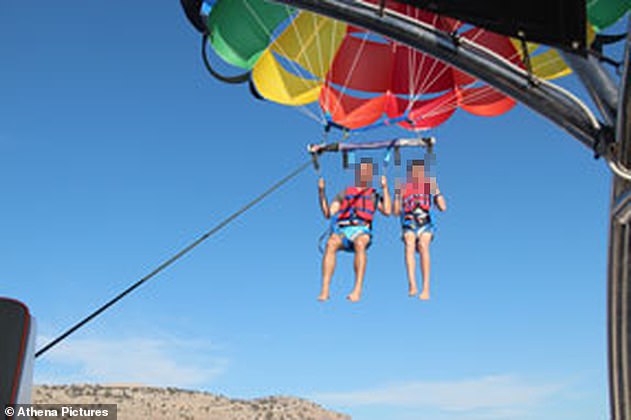 The Watersports Association of Greece claimed Mellios flouted rules by allowing three people to go parasailing. They said under-14s were not allowed and flights are limited to two people 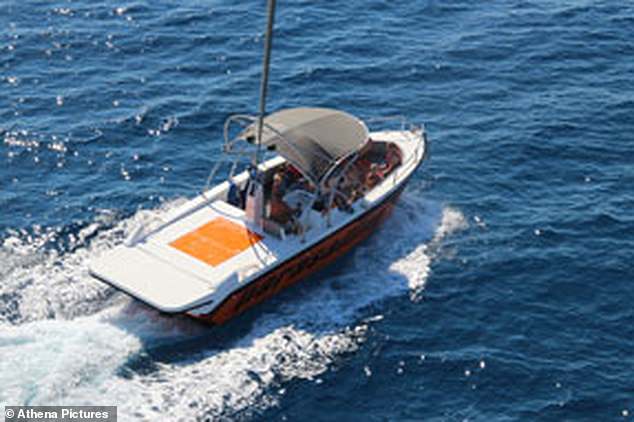 The teenagers’ parents booked the them on Mallios’ boat (pictured) after seeing him featured on the hotel’s website. He has operated for 13 years in the area popular with holidaymakers

His outfit caters largely to British tourists from a hut located on the beach behind the four star Lindos Princess Hotel where the family arrived at the beginning of the week.

The three teenagers’ parents booked the them on Mallios’ boat after seeing him featured on the hotel’s website.

But a storm erupted after the group set off and the speedboat was seen desperately trying to catch-up with the trio after the rope snapped and their parachute went veering uncontrollably toward the rocky coastline.

Today Mallios’ vessel had been left anchored just yards from the spot where the tragedy occurred – around two miles from the hotel.

The company’s website carries a personal assurance from Mallios about its safety standards.

He says: ‘It is very important to us to constantly provide a high quality service.

‘Therefore we change or upgrade our equipment frequently.’

A legal source on the island said: ‘He has yet to be officially charged. He was released pending an investigation that would give the prosecutor more information into the causes of the accident, to determine what charges, if any should be brought.

‘Authorities however arrested him on manslaughter charges and causing serious bodily injury to the third teen.’ 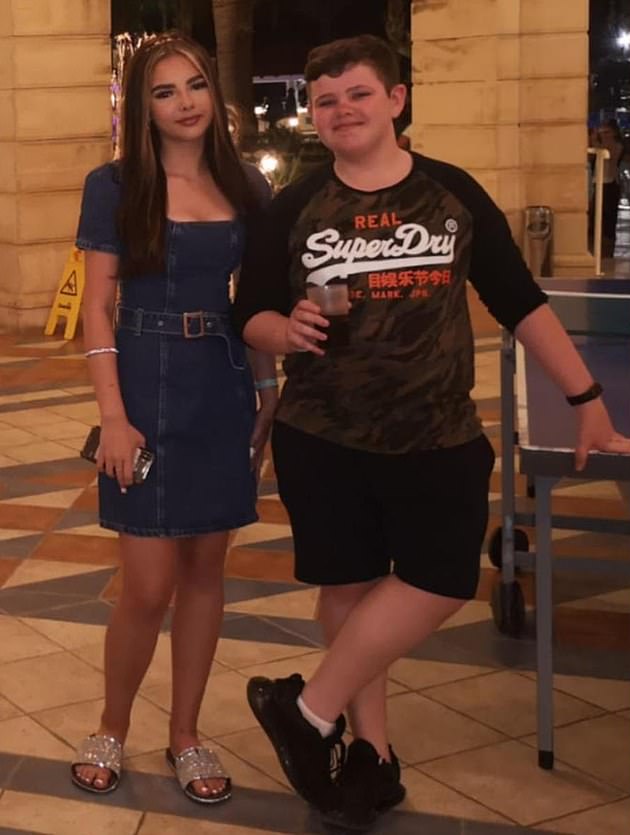 A terrifying storm blew up off the coast of Rhodes causing the rope fastening the trio to a speedboat to snap. Pictured: Jessica Hayes, 15 (left) and Michael Connelly, 13 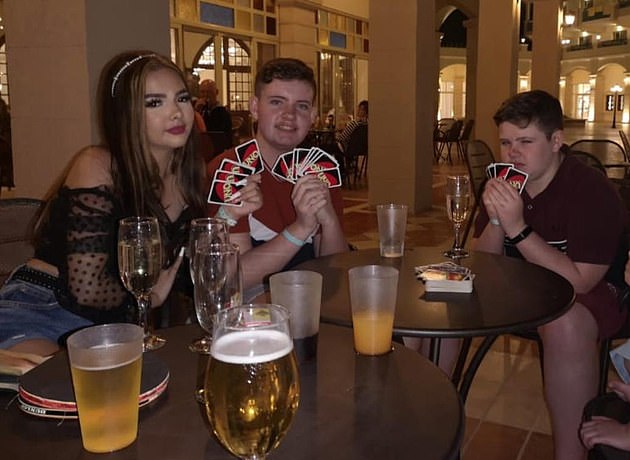 The family did not know the tragedy that had befallen their children for some time, with the boat captain not returning to the beach. Pictured: The trio play the card game UNO together

The father of Jessica, 15, from Corby in Northamptonshire, yesterday told how his family were ‘put through four hours of misery’ by doctors before being told the heartbreaking news of their deaths.

Jessica’s father Tony, from Kettering, paid tribute to his ‘beautiful’ daughter as he criticised medics for their response to the tragedy.

Speaking from the hospital, he told MailOnline how the family were sitting on the beach when the children went parasailing, and they only learned of the accident via the media.

Tony said the hotel didn’t say anything and the person driving the boat didn’t return, leaving the family panicking for the trio.

They first heard that James was in the worst condition, and Jessica and Michael had only suffered fractures. 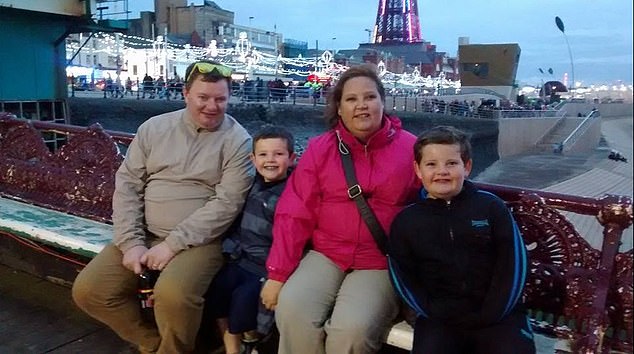 He said: ‘They were dead at the hospital the whole time – and yet we were being strung along with false hope that they were all ok.

‘The way the nurse told us, after four hours, that they had died. There was no empathy. She almost shouted it. It was so stern.

‘It was four hours until we were able to find out what happened. They put us through misery for four hours.’

The police even came to collect the family’s passports during the four hours but refused to say what had happened.

They later learned police were using the photos to identify the bodies, which Tony was heartbreakingly forced to confirm yesterday. 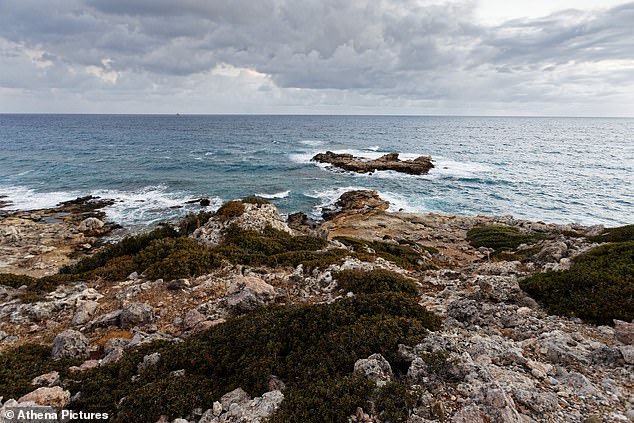 Pictured: The rocks where the three young people were found in an area known as Gina in Rhodes, Greece today

While in the air the trio veered onto a jagged outcrop just out of sight of sunbathers and are believed to have fallen from a height of 400ft. Due to the remote location of where the teenagers fell, it took rescue crews several hours to reach them.

It is understood that James – who survived – fell onto the rocks, breaking both his legs and suffering injuries to his head and spine.

James’s mother, Sharon Connelly, 47, fainted when she eventually saw the extensive damage to her son’s face in hospital, protothema reported.

She then regained consciousness and is said to have cried out ‘Where are my other two children’, thinking that her niece Jessica and son Michael may have only been injured and brought to the hospital in another ambulance.

Yesterday a staff member told how one of the mothers from the group came out to the beach where the teenagers had set off from after they failed to return.

He said: ‘She was asking the lifeguards, ‘Where are the kids? They should have been back by now.’ She had no idea what had taken place. No one did.

A spokesperson for Greek coastguard said: ‘The coastguard was informed of the accident by a military watchtower and the water sports company. 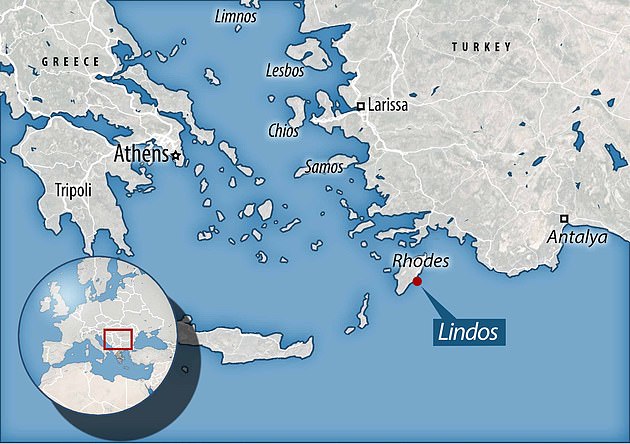 The two teenagers were found on the rocks near the city of Lindos in Rhodes, Greece

‘A coastguard vessel was sent to the scene immediately.

‘The ambulance service was informed.

‘They were found by coastguard in a secluded rocky area and they were pulled out by the 51-year-old parasailing boat handler with the help of the fire service.

‘An investigation is underway. The boat handler has been arrested on suspicion of manslaughter.’

Last night a Northamptonshire Police spokeswoman said that responsibility for the case lies with the Greek authorities and the Foreign Office but that the Northamptonshire coroner will be informed.