Frozen:  12 benefits and allowances that have been left by successive governments in the deep freeze

As inflation continues to soar – 9.9 per cent and rising – the debate is escalating over which benefits should increase to match it.

Prime Minister Liz Truss has vowed to increase the state pension in line with inflation, but has so far refused to promise the same for some other key welfare payments such as universal credit and disability benefits.

But while it is these key benefits that are being most scrutinised – and understandably so – there are many others out of the spotlight that have not had an uplift to deal with the rising cost of living for decades. Over the years they have been ravaged by inflation and in the worst cases are now worth less than a sixth of what they were in real terms when they were last set.

Here we reveal 12 benefits and allowances that have been left by successive governments in the deep freeze.

Back in 1975, Harold Wilson was Prime Minister and Margaret Thatcher had just become leader of the Opposition. At that time, parents could gift their son or daughter up to £5,000 on the happy occasion of their wedding day without the risk of having to pay inheritance tax.

The sum would have easily covered the cost of the average wedding and even helped to set the couple up in their first home together. The average house price at the time was £9,179, according to the Land Registry. Now 47 years on, this allowance is still stuck at £5,000. Had it risen with inflation, it would now be worth more than £34,000.

Similar allowances exist that permit grandparents to give a grandchild £3,000 on their wedding, and anyone else to make a wedding gift of up to £1,000 – without risking inheritance tax. These allowances are also unchanged since 1975.

Lee Clark, a financial planner at wealth manager Brewin Dolphin, says: ‘These sums would be nice to receive, but would have nowhere near the impact on a couple starting out in married life as they would have when they were first introduced.’

But the inheritance tax allowance that has the biggest impact for most families is the overall tax-free allowance, which has not risen from £325,000 for 13 years. As a result, rising numbers of families are caught out by inheritance tax. Had it risen with inflation, it would be worth around £462,000 today.

Gill Millen, managing director of Bowmore Financial Planning, says: ‘Over the past 13 years, inheritance tax has become a significant income stream for Revenue & Customs. What was intended to be a tax only on the truly wealthy has become a general tax on Middle England and the next generation.’

Although only around one in 20 families pay it, inheritance tax is one of the most loathed levies. Last week, Andrew Griffith, Financial Secretary to the Treasury, called on the Government to be ‘politically brave’ and eliminate the tax altogether.

Redundancy payments, handed to people when they’re laid off by their employer, are tax free up to £30,000. The tax break is designed to soften the blow for people who lose their job and to help give them a safety net while they look for a new position.

But the limit has been frozen for 34 years. Had it increased with inflation, it would be worth around £74,000.

Tom Selby, head of retirement policy at investment platform AJ Bell, says: ‘The redundancy pay threshold has not been revised since 1988. To give you an idea of just how long ago that was, chart toppers during the year the threshold was set included Never Gonna Give You Up by Rick Astley.’

He adds: ‘While Brits may reminisce fondly about the late 1980s, I suspect few would look quite so favourably on the fact that the redundancy pay threshold hasn’t increased at all since then.’

THE AMOUNT CHILDREN CAN EARN IN INTEREST TAX-FREE

Children can earn up to £100 in interest on their savings every year, after which it is taxed as if it belonged to their parents. This threshold has not changed since 1999 – had it increased in line with inflation, it would now be worth around £170.

While savings rates were low, allowances such as this had little impact as you’d need substantial savings to breach it. But as rates rise, a growing number of families could be caught out when saving for a child’s future. Children do, however, also receive an annual Individual Savings Account (Isa) allowance of up to £9,000.

Anyone who is not in employment can put up to £3,600 into a pension every year and benefit from tax relief. However, the threshold has been stuck for 21 years – and would be worth close to double that if it had risen with inflation.

The allowance is particularly valuable for people who have taken time out of the workplace due to caring responsibilities – it allows them to support others without it having such a big impact on their own long-term financial wellbeing. Freezing the limit could leave them poorer in retirement.

Lucy Woodward, a chartered tax adviser at Saffery Champness, says: ‘Families where one parent stays at home to look after the children are particularly likely to lose out from the erosion of this allowance.’ 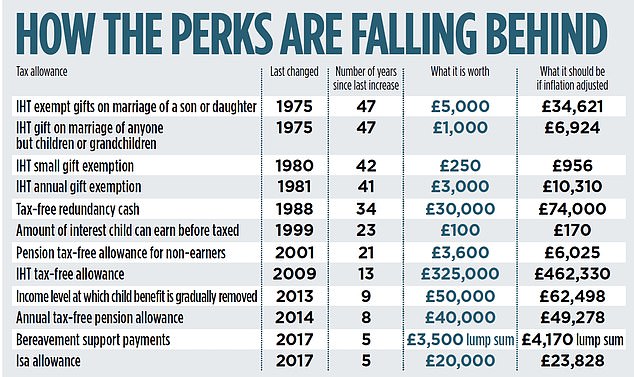 In 2013, the High Income Child Benefit Tax Charge was introduced. It means that families gradually have their child benefit removed where one parent earns more than £50,000 a year. When one parent’s salary is over £60,000, the family receives nothing. The threshold has never changed – had the £50,000 limit increased with inflation it would now be worth over £62,000.

Myron Jobson, senior personal finance analyst at investment platform Interactive Investor, says: ‘The current child benefit rules and the £50,000 threshold were set back in 2013 when that sum was worth a lot more than today. It is shameful that the threshold hasn’t risen in line with earnings. Many parents earning around that figure would say they don’t feel particularly wealthy, especially giving the rise to the cost of living.’

Many argue that the rules were unfair from the outset. A family where two parents both earn £48,000 would receive the full child benefit entitlement, whereas a family where one earns £60,000 and one is not in work would receive nothing.

Workers can pay up to £40,000 into their pension every year and benefit from tax relief. However, the highest earners and anyone who has already started to draw money from a pension can see this drop to £4,000. Had the £40,000 limit risen with inflation, it would now be worth close to £50,000.

Brewin’s Clark says: ‘The lifetime allowance penalises those who are prudent and started saving into their pension from an early age and stuck with a lifetime of saving.

‘There has been a massive exodus of staff from the NHS who have been forced to retire early or risk being hit with a large tax bill for breaching the allowance.’

These payments are designed to help families who suffer a bereavement. They are paid for out of the National Insurance contributions of the deceased, who will never be able to claim them themselves as a state pension.

The payments amount to £3,500 plus £350 for 18 months for families who receive child benefit. It can be a lifeline for young families when they need it most – to help cover funeral costs and often the loss of one parent’s income. However, the benefit has not increased since 2017.

Alison Penny, director of the Childhood Bereavement Network, says: ‘This benefit – a crucial lifeline for widowed parents and their children – has seen a 16.4 per cent drop in value since it was introduced. It’s appalling that in real terms, widowed parents now receive a sixth less than they did when MPs voted for this benefit. It makes a painful time even harder.’

Separately, support for funeral expenses for grieving families on the lowest incomes have also failed to keep up with inflation. The Funeral Expenses Payment, which covers costs such as funeral director fees, the coffin, transport and minister or celebrant, is capped at £1,000. It has risen just once since it was introduced 17 years ago.

Lee Clark says: ‘It used to rise with inflation, until it was rounded up to £20,000 five years ago and has been unchanged since.’

As interest rates rise, the ability to shelter savings from tax is becoming increasingly valuable.