By Sarah Harris for the Daily Mail

A retired Church of England bishop yesterday backed demands for compulsory worship to be scrapped in schools.

The Right Reverend Lord Harries of Pentregarth, a former Bishop of Oxford, supported a new law that would remove the requirement for non-religious state schools to provide daily mandatory collective worship and introduce ‘inclusive assemblies’ instead.

The proposed Education (Assemblies) Bill, which does not apply to faith schools, was tabled by Liberal Democrat Baroness Burt of Solihull, vice-chair of the all-party parliamentary humanist group (APPHG).

During its second reading in the House of Lords yesterday, Lord Harries – Bishop of Oxford, from 1987 to 2006 – told peers that Christianity is ‘committed to free choice’.

He said: ‘I am not opposed to compulsory worship in schools in principle.

The Right Reverend Lord Harries of Pentregarth, a former Bishop of Oxford, supported a new law that would remove the requirement for non-religious state schools to provide daily mandatory collective worship and introduce ‘inclusive assemblies’ instead

‘And it was natural that when our society was a predominantly unified one that the beliefs of society as a whole should be expressed in state-funded institutions.

‘But, as is obvious, this is no longer the case. Worship at the moment has to be predominantly of a Christian character but there are millions of people of other religions.’

He claimed the requirement under law does ‘not reflect society in which we now live’.

Lord Harries added: ‘I support this Bill because Christianity is fundamentally committed to free choice. The only good reason for believing a religion is because you believe it to be true and you personally recognise it to be so.’

But the Right Reverend Steven Croft, one of the successors to Lord Harries as the Bishop of Oxford, said: ‘If the Bill is passed one effect may be to make anything which is more than secular assembly not legal and contested in our schools.’

He said he also feared the Bill risked children growing up ‘in ignorance of the possibilities and depth of the faith traditions’. 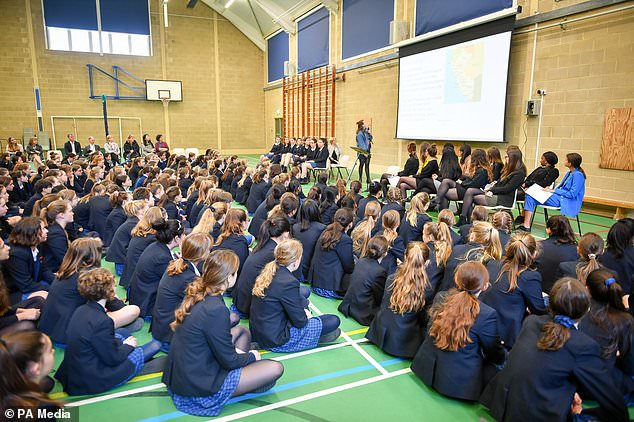 Baroness Morris of Yardley, a former Education Secretary who did not support the Bill, said: ‘Most children would not know about Christmas carols if they didn’t sing them at school.

‘And as Harvest approaches, one of the reasons we probably all know the hymns of harvest is because we sang them in school.’

She said she did not want a society where youngsters do not know such songs, adding that it gives them a chance to understand the origins of key events.

Speaking for the government, Conservative frontbencher Baroness Chisholm of Owlpen said there is ‘no need’ to amend existing legislation on collective worship.

She said: ‘Collective worship is already flexible and inclusive in nature..’

The Bill received an unopposed second reading and will undergo further scrutiny at a later date. It is unlikely to become law without government support.