Retailers have suffered a ‘steep drop’ in sales for another consecutive month as lockdown continued to take a sledgehammer to the sector, research has revealed.

Non-essential shops in England have been given the green light to cautiously reopen, but retailers remain pessimistic after reporting a 37 per cent slump for June.

A survey of the industry, which has been one of the hardest hit by coronavirus as stores were forced to shutter, found the picture is still bleak.

Yet in a chink of light, the CBI’s Distributive Trades Survey, conducted between May 27 and June 12, revealed a slightly slower pace of decline than the previous month, after sales tumbled by 50 per cent in the year to May.

The poll of 174 firms revealed an ‘extremely negative’ forecast from retailers which have been able to reopen from June 15, with the vast majority of respondents expecting sales to be lower compared with July 2019.

Meanwhile, growth in internet sales volumes picked up to a rate above the long-term average, with online sales rising at the fastest pace since October 2018.

The volume of orders placed on suppliers fell at a slower rate in the year to June and is expected to fall at a similar rate next month.

Rain Newton-Smith, chief economist at the CBI, said: ‘With high street shops, department stores and shopping centres reopening across England last week amid some scenes of long queues, you’d be forgiven for thinking retailers’ difficulties are coming to an end. 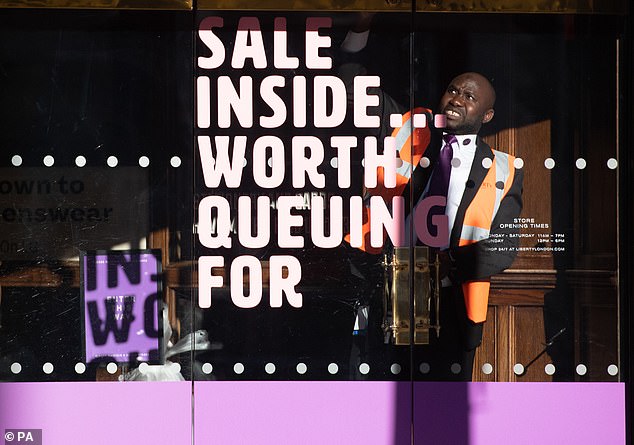 A worker closes shop doors at a store on Regent Street, in London, as further restrictions are lifted to bring England out of the coronavirus lockdown

‘But the health of the retail sector remains in the balance. Despite retailers working flat out to make sure they are safe and ready to open their doors, outside the grocery sector most retailers expect sales to be far below where they were this time last year.

‘Enabling these businesses to open is a critical step on the road to restarting our economy and will help support hundreds of thousands of jobs across the UK.’

The retail sector saw its biggest sales drop on record in April (-55 per cent) when non-essential stores were ordered to close.

Non-essential shops are now tentatively welcoming back customers, but have been forced to restrict numbers because of tough social distancing measures.

Desperate to breathe new life into the high street and fire up the economy, Boris Johnson is halving the two-metre rule to allow retailers to serve more shoppers.