Retailers face a tough Christmas ahead after the number of shoppers visiting stores and items sold slowed down sharply last month, just as energy bill rises kicked in.

October started strongly, but sales quickly tailed off and dropped in the last week of the month, according to the latest high street sales tracker by advisory firm BDO.

Like-for-like retail sales across stores and online rose 3.5 per cent compared to a year ago, but if we remove the first week of the month, retail sales grew by only 1.8 per cent.

‘Given the current level of inflation, this means that actual sales volumes have decreased significantly,’ noted Sophie Michael, head of retail at BDO.

Only watching: Retail sales continue to trend downwards as the cost of living crisis bites

In-store sales were 6 per cent higher than in October last year, but that is the slowest growth since non-essential shops reopened after emerging from lockdown in February 2021.

With the cost of living crisis squeezing budgets, lifestyle sales – which include general household goods, gifts, health & beauty and leisure goods – fell by 0.1 per cent.

‘This is the first negative result for the category since February 2021, suggesting that the fall in consumer discretionary spend has spread to include the lifestyle sector, having already seen homewares record declines in recent months,’ BDO said.

Fashion sales fared better than any other category, climbing 6.7 per cent, although it marks the third straight month of slowing growth.

Michael said the latest figures marked a ‘disappointing start’ to the so-called ‘golden quarter’, which encompasses Christmas and Black Friday and is therefore considered a key period for retailers.

‘After a summer of sluggish retail sales growth, retailers would have been hoping for performance to pick up once we reached the Golden Quarter,’ she added.

‘However, like-for-like sales are continuing to trend downwards, as consumer confidence remains at near record lows.’ 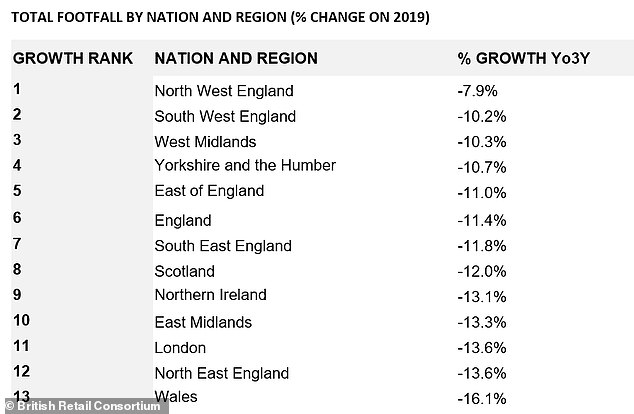 The slowdown in sales is matched by a slowdown in the number of people entering shops across the UK, separate figures show.

Footfall rose by 2 per cent in October compared to last year, continuing to recover from the pandemic.

However, that’s a sharp slowdown from September’s 8 per cent increase, figures by the British Retail Consortium show.

It remains 12 per cent below October 2019, before the pandemic started.

BRC chief executive, Helen Dickinson, said: ‘Footfall took a stumble in its slow return to pre-pandemic levels as rising prices and tightening purse strings meant many fewer consumers made trips to the shops.

‘Rail strikes also did no favours, with most cities seeing a fall in footfall; that could be exacerbated by further strike action.’

The gloomy figures come as the Bank of England yesterday warned the UK was at risk of entering the longest recession in 100 years after hiking rates once again to keep inflation at bay.

The Bank said UK economy faced a ‘very challenging outlook’, forecasting a recession that could last until the middle of 2024.