The quake’s epicentre was in Elazig province, about 340 miles east of the capital, Ankara, where it struck at around 8.55 pm (1755 GMT), the government’s disaster and emergency management agency said.

The US Geological Survey assessed the quake’s magnitude at 6.7, and said it struck at a depth of about six miles.

‘It was very scary, furniture fell on top of us. We rushed outside,’ 47-year-old Melahat Can, who lives in the city of Elazig, said.

‘We will spend the coming days in a farmhouse outside the city,’ she said.

Residents evacuate their houses as a precautionary measure in Turkey’s eastern Diyarbakir province after a 6.8-magnitude earthquake that jolted eastern Turkish province of Elazig was also felt in Diyarbakir 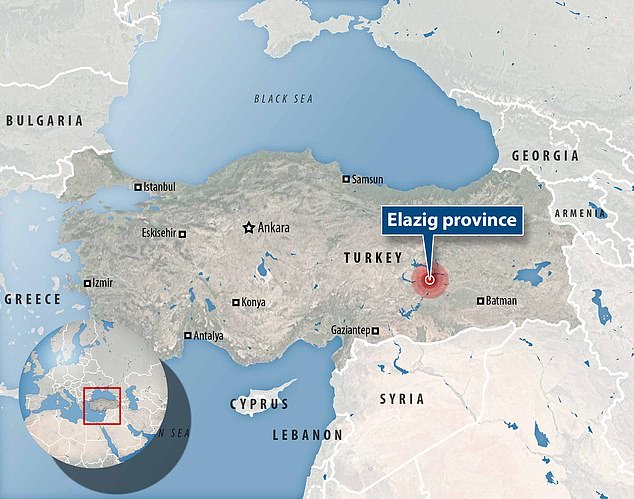 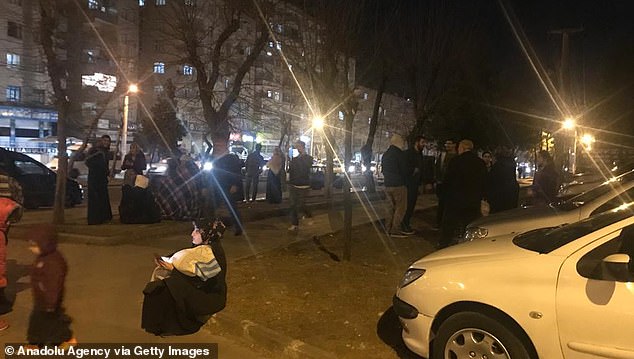 Pictured: People can be seen gathering outside their homes in eastern Turkey after this evening’s earthquake

‘We are hoping we will not have more casualties,’ he was quoted as saying by the official Anadolu news agency.

‘Sivrice was shaken very seriously, we have directed our rescue teams to the region,’ he told reporters, adding that there were reports of some collapsed buildings in the region.

The tremor was felt in several parts of eastern Turkey including Tunceli, the Turkish broadcaster NTV reported, adding that neighbouring cities had mobilised rescue teams for the quake area. 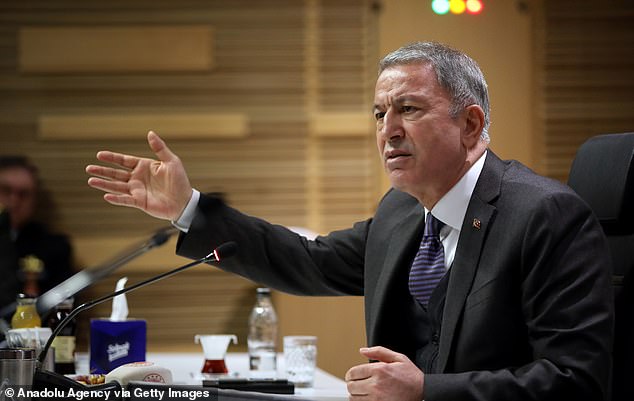 Turkish Defense Minister Hulusi Akar visits Roketsan, leading Turkish defence company, in Ankara, Turkey on January 22, 2020. Akar said today that the armed forces were on standby to help if they were needed

‘We have sent four teams to the quake region,’ Recep Salci of Turkey’s Search and Rescue Association (AKUT) said. ‘We have news of collapsed buildings, and preparing more teams in case of need.’

Zekeriya Gunes, 68, a resident of Elazig city, said a building 200 metres down on his street had collapsed but he did not know whether it was inhabited.

‘Everybody is in the street, it was very powerful, very scary,’ he said.

Defense Minister Hulusi Akar told reporters that there were no reports of any casualties in Sivrice but said the quake may have caused casualties in rural areas outside the town.

‘Sivrice was shaken very seriously, we have directed our rescue teams to the region,’ he told reporters, adding that there were reports of some collapsed buildings in the region.

He added that troops were also on standby to assist if required. 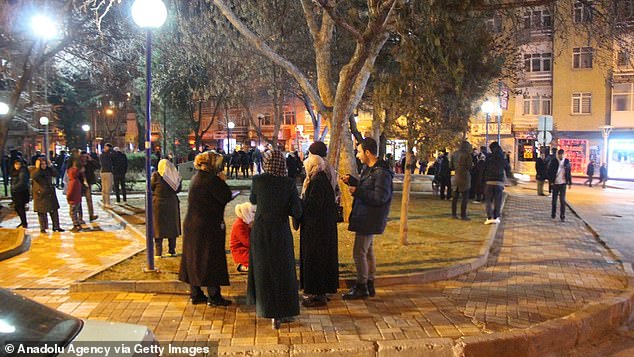 Residents leave their houses after a 6.8-magnitude earthquake jolted eastern Turkish province of Elazig on January 24, 2020

Turkey lies on major faultlines and is prone to earthquakes.

The Kandilli seismology center in Istanbul said the quake measured 6.5.

The US Geological Survey gave the preliminary magnitude as 6.7, with the quake affecting not only Turkey but also Syria, Georgia and Armenia.

The quake had a depth of 6.2 miles, according to EMSC.

State media in neighbouring Syria reported the earthquake was felt in several areas of the country.

Local media in Lebanon reported the same in the cities of Beirut and Tripoli.

In 1999, a devastating 7.4 magnitude earthquake hit Izmit in western Turkey, leaving more than 17,000 people dead including about 1,000 in the economic capital Istanbul.

In September, a 5.7-magnitude earthquake shook Istanbul, causing residents to flee buildings in the economic capital.

Experts have long warned a large quake could devastate the city of 15 million people, which has allowed widespread building without safety precautions.