Too much screen time can not only damage your eyes, but the rest of your body processes as well – even potentially shortening your lifespan – experts warn.

Researchers at the Buck Institute, a Bay Area nonprofit that investigates matters related to aging and age-related disease, found that light exposure to the eyes can disrupt the circadian rhythm, and as a result, cause or worsen chronic disease.

Because the eyes are constantly exposed to the outside world – unlike many other organs – their immune defenses are more active. Over-active defenses can disrupt internal body processes, and cause harm to other organs as a result.

As screen time among almost all humans increases – a natural part of the digital world – researchers are warning that too much light exposure every day can have disastrous long-term consequences.

Researchers found that too much light exposure can not only damage a person’s eyes, but also disrupt the circadian rhythms of the body’s cells and even shorten a lifespan (file photo)

‘Staring at computer and phone screens, and being exposed to light pollution well into the night are conditions very disturbing for circadian clocks,’ Dr Pankaj Kapahi, a professor and nutrition expert at the institute, said in a release.

‘It messes up protection for the eye and that could have consequences beyond just the vision, damaging the rest of the body and the brain.’

The research team notes that previous research has noted a correlation between poor overall health and eye disorders.

One example is diabetic retinopathy, which is responsible for around 3.9 million instances of blindness around the world, according to the World Health Organization. 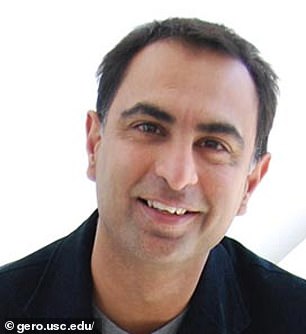 Dr Pankaj Kapahi (pictured), warns that overuse of electronics like cell phones can have real negative impact on a person’s lifespan

The condition forms as a complication of diabetes, where the elevated blood sugar levels cause damage to parts of the eye, and eventually lead to blindness.

Usually these example work from body to eye, though, with issues in the body causing vision issues as an ancillary effect.

Researchers at the Buck Institute found that some trends may run in the opposite direction, though, with eye health affecting nearly every cell in the body.

Dr Brian Hodge, a researcher at the institute, explains that every cell in the body operates on a circadian clock.

These clocks operate on 24 hour cycles, having evolutionarily adjusted to dealing with the daily day-night cycle.

Nearly every cell in the body operates on this cycle in one way or another, leading to it impacting every single bodily function.

Many people’s circadian rhythms are being disrupted, though, as life stressors, device usage and other factors are leading to people sleeping less now than before.

Light in particular can disrupt these cycles even further.

The researchers explain that the eyes become inflamed when exposed to light, a normal body process for the organs that face the outer world.

Where problems arise are when the eyes are inflamed for too long, which can cause or worsen some chronic diseases.

Kapahi and Hodge discovered this when they took part in research on fruit flies to see how exposure to food, light and other factors would affect their lifespan and body processes. 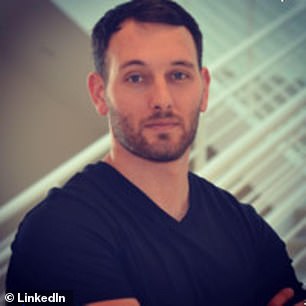 Dr Brian Hodge (pictured) explains that every cell in the body operates on a circadian rhythm of some sort, which can be disrupted by light

‘The fruit fly has such a short lifespan, making it a really beautiful model that allows us to screen a lot of things at once,’ said Hodge.

A group of flies was split into two groups. One was allowed an unrestricted diet, while the other was only allowed to consume around ten percent of the daily protein as the opposite group.

This led to researchers discovering the cyclical nature of some of these hormones, how they worked, and how their activities changed throughout the day.

The team found that the genes that activated the most in the diet-restricted flies  were related to photoreceptors in the eye, which respond to light.

Further research found that flies who were kept in the dark entirely lived longer lives than their peers, signaling that the impacts on the circadian cycle can have negative effects on a beings lifespan.

This is especially worrying news coming out of the COVID-19 pandemic, where screen time has vastly increased – especially among adolescents who are now staring at screens for twice as long as they were before the virus sent many activities indoors in early 2020.