Researchers have discovered 3,600-year-old evidence that the ancient city of Tall el-Hammam was destroyed by a ‘cosmic airburst,’ which may have inspired the Biblical story of destruction of Sodom, according to a new study.

Experts from around the world, including UC Santa Barbara, uncovered pottery shards that had their outer surfaces melted into glass, ‘bubbled’ mudbrick and partially melted building material in a 5-foot thick burn layer in the Jordan Valley.

These are indications of an anomalously high-temperature event, which the researchers say was ‘larger than the 1908 Tunguska explosion  in Siberia and significantly hotter than anything that the technology of the time could produce.

Researchers have discovered 3,600-year-old evidence that the ancient city of Tall el-Hammam was destroyed by a ‘cosmic impact,’ which may have inspired Bible story of destruction of Sodom 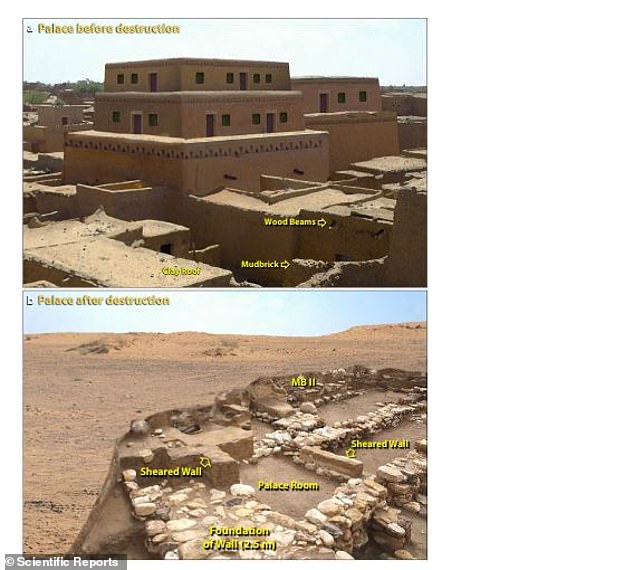 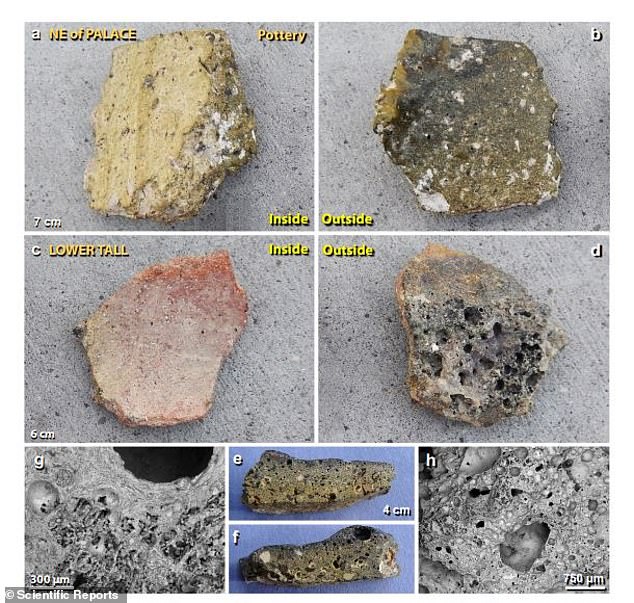 Melted pottery (a and b) while (c) shows a 6-cm wide potsherd storage jar from the lower tall, displaying an unaltered inner surface, and (d) the highly vesicular outer surface 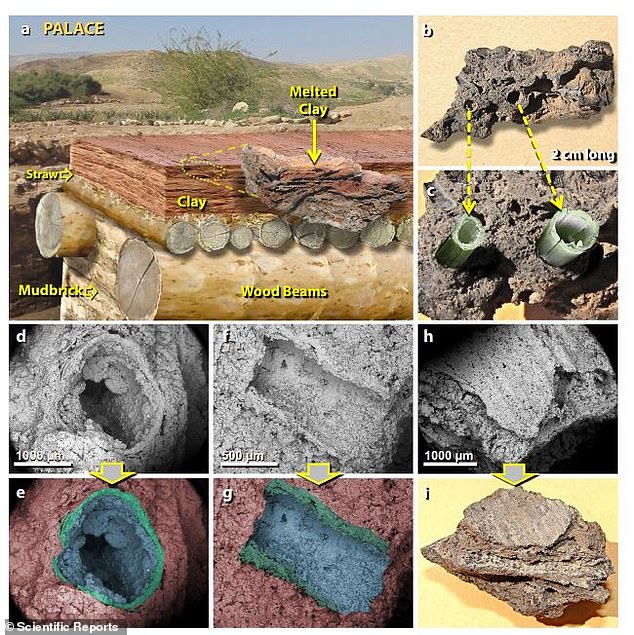 ‘We saw evidence for temperatures greater than 2,000 degrees Celsius,’ said one of the study’s co-authors, James Kennett, in a statement.

Kennett likened the explosion to the Tunguska Event, a roughly 12-megaton airburst that occurred in 1908, when a 56-60-meter meteor pierced the Earth’s atmosphere over the Eastern Siberian Taiga. 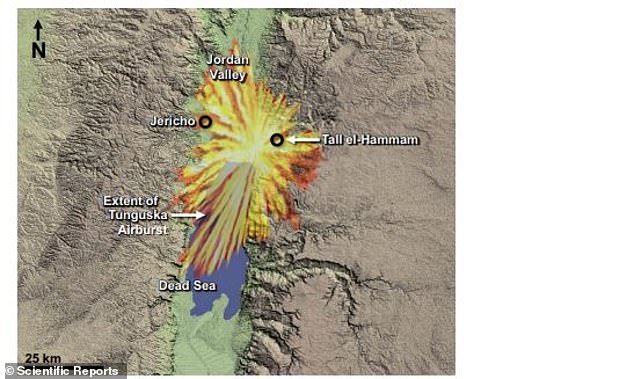 The researchers likened the explosion to the Tunguska Event (overlayed on top of Tall el-Hamman), a roughly 12-megaton airburst that occurred in 1908, when a 56-60-meter meteor pierced the Earth’s atmosphere over the Eastern Siberian Taiga

TUNGUSKA EVENT THEORIES: WHAT COULD HAVE ‘SPLIT THE SKY IN TWO’ IN 1908

More than 110 years ago, a massive explosion ripped through the sky over the Tunguska region of Siberia, flattening trees nearly 31 miles around.

The blast is thought to have been produced by a comet or asteroid hurtling through Earth’s atmosphere at over 33,500 miles per hour, resulting in an explosion equal to 185 Hiroshima bombs as pressure and heat rapidly increased.

But, with no definitive impact crater and little evidence of such an object ever found, scientists remain perplexed as to what truly caused the event in which ‘the sky was split in two’.

Numerous studies have attempted to make sense of what happened on June 30, 1908 at Tunguska.

From UFO theories to speculation about the supernatural, the mysterious event has spurred explanations of all kinds, many of them lacking scientific basis.

Some scientists even suggested a black hole had collided with Earth – but other experts quickly shot down the idea.

In a review published in 2016 in the Annual Review of Earth and Planetary Sciences, Natalia Artemieva of the Planetary Science Institute in Tucson, Arizona explains that the event followed a clear course.

Whatever caused the event likely entered the atmosphere at 9-19 miles per second, and would have been extremely fragile, destroying itself roughly six miles above Earth.

The possibility of an asteroid explosion was first proposed in 1927 by Leonid Kulik, 20 years after the event.

Others suggested the space-object may instead have been a comet, made up of ice rather than rock, meaning it would have evaporated as it entered Earth’s atmosphere.

But, some scientists warn that these findings do not definitively explain the bizarre explosion – with meteor showers being a frequent occurrence, these samples could be the remnants of a much smaller, unnoticed event.

To some degree, the Tunguska event still remains a mystery, which scientists are continually working to solve – but, whether it be from a comet or asteroid, most agree that the explosion was caused by a large cosmic body slamming into Earth’s atmosphere.

While there is no scientific proof that Tall el-Hammam, which was located on high ground in the southern Jordan Valley, was the Biblical city of Sodom, Kennett and the study’s authors do concede it may be a possibility.

‘It is worth speculating that a remarkable catastrophe, such as the destruction of Tall el-Hammam by a cosmic object, may have generated an oral tradition that, after being passed down through many generations, became the source of the written story of biblical Sodom in Genesis,’ they wrote in the study.

‘The description in Genesis of the destruction of an urban center in the Dead Sea area is consistent with having been an eyewitness account of a cosmic airburst, e.g., (i) stones fell from the sky; (ii) fire came down from the sky; (iii) thick smoke rose from the fires; (iv) a major city was devastated; (v) city inhabitants were killed; and (vi) area crops were destroyed.

‘If so, the destruction of Tall el-Hammam is possibly the second oldest known incident of impact-related destruction of a human settlement, after Abu Hureyra in Syria ~ 12,800 years ago.’ 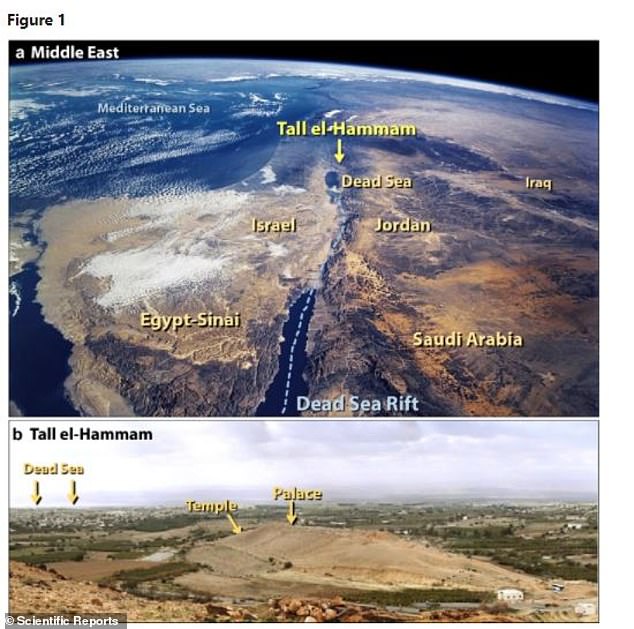 The cosmic blast leveled the city, leaving the palace and surrounding walls flat, according to the study

The story of Sodom and Gomorrah

Sodom and Gomorrah were cities whose destruction by God for their ‘wickedness’ is referenced throughout the Old and New Testament and the Koran.

In the Genesis account, God reveals to Abraham that Sodom and Gomorrah are to be destroyed for their grave sins.

Abraham pleads for the lives of righteous people living there, especially the lives of his nephew, Lot, and his family.

God agrees to spare the cities if 10 righteous people can be found within them.

Finding only Lot and his family as righteous among the inhabitants, the angels warn Lot to quickly evacuate the city and not look back.

God destroys the cities with sulfur and fire, but Lot’s wife does not follow the angels’ orders.

She looks back upon the city and is turned into a pillar of salt.

The cosmic blast leveled the city, leaving the palace and surrounding walls flat, according to the study.

In addition, there were human remains, including a skull, that indicated ‘extreme disarticulation and skeletal fragmentation in nearby humans,’ the researchers wrote.

The orange tint of the skull indicates it was exposed to temperatures above 200 degrees Celsius.

Kennett said there was additional proof of a cosmic impact when iron and silica-rich spherules were discovered in soil and sediment in the blast layer, in addition to the melted metals.

‘I think one of the main discoveries is shocked quartz,’ Kennett explained. ‘These are sand grains containing cracks that form only under very high pressure.’

‘We have shocked quartz from this layer, and that means there were incredible pressures involved to shock the quartz crystals—quartz is one of the hardest minerals; it’s very hard to shock.’

Diamonoids were also discovered in the destruction layer, a tiny molecule – which is as hard as a diamond – that has long been associated with cosmic impact events.

The cosmic impact likely caused a significant amount of salt to make its way into the blast layer, as an average of four percent was found in the sediment and in some cases, as high as 25 percent.

‘The salt was thrown up due to the high impact pressures,’ Kennett explained.

‘And it may be that the impact partially hit the Dead Sea, which is rich in salt.’ 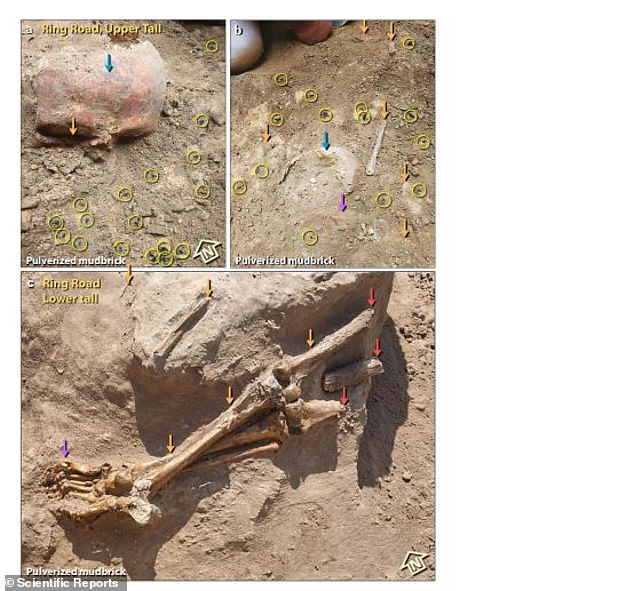 Researchers discovered human remains in the destruction layer, including a skull, that indicated ‘extreme disarticulation and skeletal fragmentation in nearby humans.’ The orange tint of the skull (a) indicates it was exposed to temperatures above 200 degrees Celsius 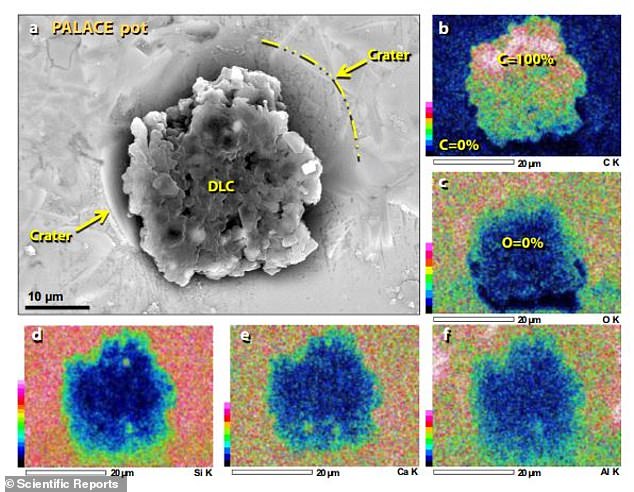 Diamonoids were also discovered in the destruction layer, a tiny molecule – which is as hard as a diamond – that has long been associated with cosmic impact events 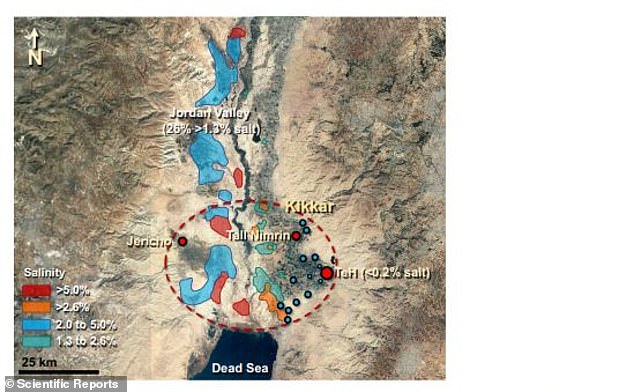 The cosmic impact likely caused a significant amount of salt to make its way into the blast layer, as an average of four percent was found in the sediment and in some cases, as high as 25 percent

The impact may have been so strong that the salt from the Dead Sea was re-routed into nearby Tell es-Sultan (also known as Jericho) and Tall-Nimrin.

It’s possible it may have caused the ‘Late Bronze Age Gap,’ which resulted in humans abandoning the lower Jordan Valley because of an inability to grow crops in an area that was once fertile.

At its peak, during the Middle Bronze Age, Tall el-Hammam was 10 times larger than Jerusalem and 5 times the size of Jericho.

‘Much of where the early cultural complexity of humans developed is in this general area.’

The study has been published in the journal Nature Scientific Reports.

WHY DO ARCHAEOLOGISTS BELIEVE TALL EL-HAMMAM IS SODOM?

The majority of references made about Sodom and Gomorah appear in the Book of Genesis.

The two locations were kingdoms situated on the Jordan River plain, just north of where the Dead Sea is now located, and are described in the bible as being plush, green and well-watered.

In particular, Sodom is one of the largest cities east of the Jordan referred to throughout the Book of Genesis and the New Testament.

It is described as being situated on a common trade route, and due to its size, it was said to have been heavily fortified with towers and tall, thick walls.

It is said to be the largest city that would have existed in the region – between five and 10 times larger than other cities in the area – making it an obvious choice.

The city was continuously expanded and fortified, with evidence for thick walls and ramparts, including one wall that was a 17ft (5.2-metre) thick and 32ft (10 meters) high.

This wall featured gates, watchtowers and at least one roadway.

During the middle Bronze Age, this wall was replaced by a huge, 23ft-wide (7 meters) rampart with a flat top that doubled as a ring road around the city.

The team believes the city it has discovered must be Sodom, because evidence suggests it thrives on the banks of the river Jordan and was an important trade route, as described in the Bible.

Further evidence to support the claims is that Tall el-Hamaam was suddenly deserted at some point time towards the end of the middle Bronze Age.

This has been suggested because the researchers have found few artefacts from the late phase of the period in comparison to other settlements in the region.

The area remained deserted for around 700 years, after which the city was repopulated, evidenced by artefacts and remains of an Iron Age settlement.