EXPRESS INFORMER > News & Politics > Report: Divorcing parents who can’t look each other in the eye ‘could be harming their children’

Divorcing parents who can’t look each other in the eye should be forced to attend re-education courses before they are allowed to share custody of their children, judge-led report claims

By Steve Doughty Social Affairs Correspondent For The Daily Mail

Divorced parents should be asked to take an ‘eye contact test’ to check whether they get on well enough to share the care of their children, according to a judge-led report.

Only if they can look each other in the face when they exchange their children should they be considered responsible parents, it says.

Passing the eye contact test would be the aim of new re-education courses the report’s authors want to become compulsory for parents who divorce or separate from next year.

Divorced parents should be asked to take an ‘eye contact test’ to check whether they get on well enough to share the care of their children, according to a judge-led report [File photo]

The report was produced to find ways of easing pressure on the family courts, where a high proportion of parents who separate now go to settle their rows over childcare and custody.

President of the Family Division Sir Andrew McFarlane, the judge who heads the family courts, said: ‘It is thought that about 40 per cent of all separating parents bring issues about their children’s care to the Family Court for determination, rather than exercising parental responsibility and sorting problems out themselves.’

The report, which was produced by a group of lawyers, social workers and academics headed by High Court judge Mr Justice Cobb, cited recent complaints from a family judge that parents are rowing in court over matters such as which motorway junction they should exchange their children at.

Those who can meet each other’s gaze in the months after they split are more likely to be able to meet at their children’s weddings in the future and make good grandparents, the report added. 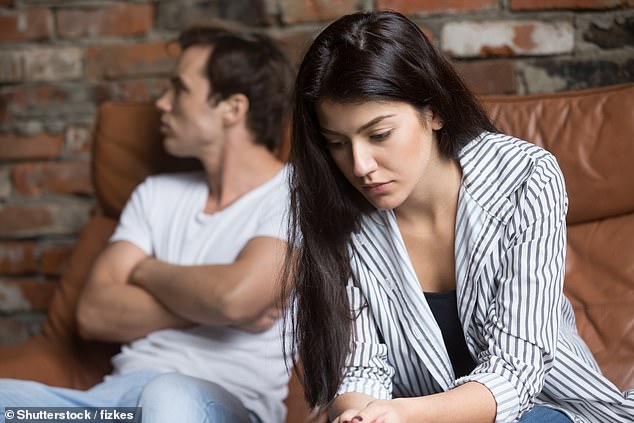 The report was produced to find ways of easing pressure on the family courts, where a high proportion of parents who separate now go to settle their rows over childcare and custody [File photo]

Ministers should make it compulsory for all parents with children who divorce to attend a ‘supporting cooperative parenting programme’, the report recommended.

It said a rule on compulsory attendance should be written into the new no-fault divorce law intended to go into operation next year. Unmarried parents who split could also be told to go on one of the supporting co-operative parenting programmes if they go to court to try to get a judge to settle their rows over the children.

‘It may be helpful for the family court to create a more definable welfare threshold in cases suitable for co-operative parenting,’ the report said.

‘Where safe to do so, we recommend adopting a threshold of parents making positive eye contact with each other at handovers of the children as a good working test. The silent treatment or ignoring the other parent is a sign of parental conflict and will increase the risk of harm to a child if it continues. Parents who engage in frequent, intense and poorly resolved inter-parental conflicts put children’s mental health and long-term life chances at risk.

‘Any programme for separating or separated parents must include action to improve communication and reduce conflict.’

The report acknowledged that laws dating from 2014 that instruct divorcing couples to attend a meeting to settle their differences through mediation rather than a court battle have been a failure. Such meetings have been shunned by couples and courts often ignore them.

Sir Andrew said the number of parents taking their rows to the family courts was ‘worrying’.

He added: ‘Where there are no issues of domestic abuse or child protection, parents ought to be able, or encouraged, to make arrangements for their own child, rather than come to a court of law and a judge to resolve the issues.’