French car giant Renault has gone back to the future with a modern 21st century electric interpretation of its classic Renault 4.

But the new version unveiled on Monday’s opening press day of the Paris Motor Show paves the way for a future all-electric compact SUV when Renault revives a legend after an absence of three decades.

The original Renault 4 with its minimal rear overhang and single top-hinged rear opening was the world’s first mass-produced hatchback and sold more than eight million cars globally between 1962 and 1992 (or 1994 in Slovenia).

The new concept, called the 4Ever Trophy, has been beefed up with a rugged, adventure-ready twist and a ‘dune-buggy vibe’ to celebrate the 25th anniversary of the 4L Trophy humanitarian rally across the Moroccan desert.

Renault 4 returns! This is the French brand’s vision for its reborn icon that will return as a compact SUV

Launching the new 4, Renault said that – like the original – it aimed to be unpretentious yet chic and a car for everyone that appeals to both men and women.

Renault said unequivocally a: ‘The 4Ever Trophy show car paves the way for the future all-electric B Segment SUV that will be at ease on urban and rural roads alike’.

The car on show in Paris is a rugged electric vehicle designed to venture off the beaten track: ‘The electric motor reflects the future production model’.

It will be made on the company’s same B-segment electric car platform as the new Renault 5, which the firm calls CMF-BEV: ‘The platform will guarantee the best performance in terms of range, acoustics, and on-road behaviour, without compromising on the design’.

The market positioning of the future Renault 5 and Renault 4 will be much like that of Clio and Captur, it said.

Renault said: ‘While 4Ever Trophy is clearly an off-road car by nature, it was also designed to be enjoyed on any road, fuss-free.

‘The future electric 4L aims to be as versatile as its predecessor once was – or rather has always been since 1962.’ 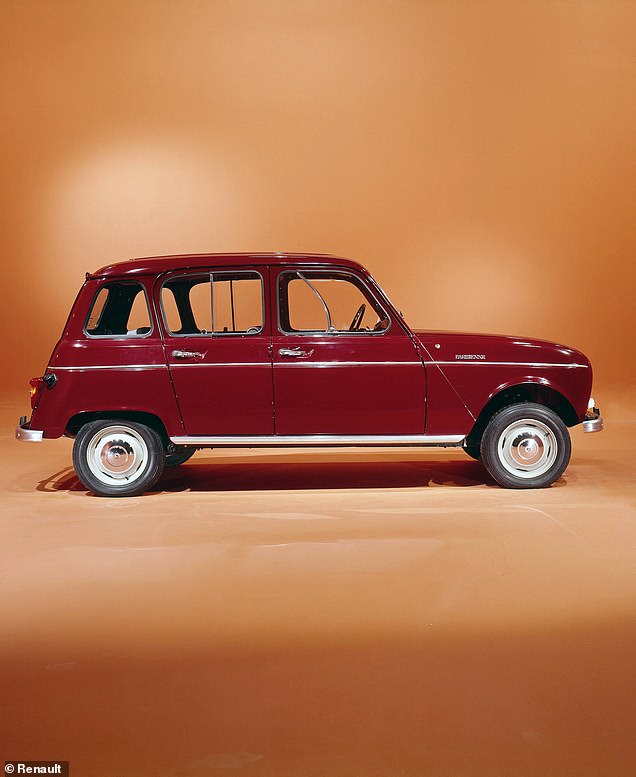 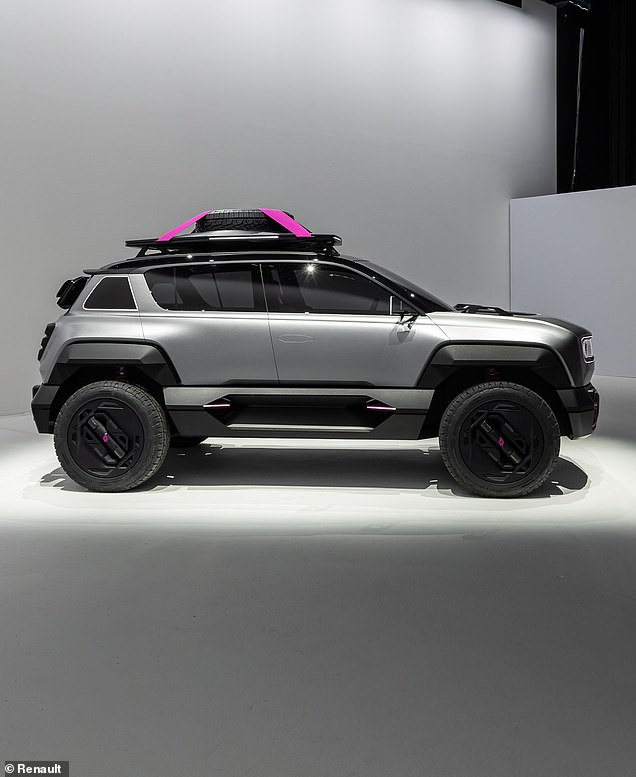 Spot the similarities? The Renault 4 nameplate is making a return having been away for three decades 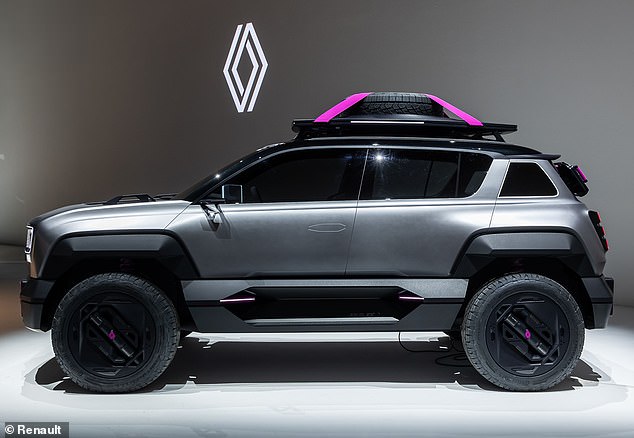 While this isn’t quite what the production-ready 4 will look like, Renault confirms it will be coming back as a fully-electric car 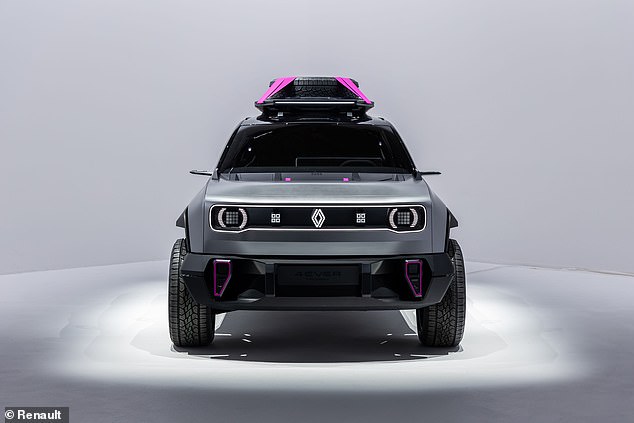 Called the 4Ever, the show car ‘paves the way for the future all-electric B Segment SUV that will be at ease on urban and rural roads alike’, Renault says

Renault stressed that the electric 4Ever Trophy puts a new twist on the original Renault 4’s iconic wide horizontal grille featuring the round, built-in lamps, by adding Matrix LED lights. The pill-shaped rear lights have also been entirely redesigned but with a clear nod to the original 4L.

Gun Metal Silver exterior paint has been designed for the great outdoors: ‘This show car exudes a clearly adventurous spirit. It has a certain flair to its look with the silver coat, and magenta highlights on the roof straps, suspension springs and wheel emblems,’ said Renault.

It added: ‘The dune-buggy vibe gives 4Ever Trophy a competitive look. The hollowed-out bonnet has a huge air exhaust that vastly improves the efficacy of the radiator located in the centre of the shield. The front overhang has been shortened considerably for a greater clearance,’

There’s also a spare tyre on the carbon fibre roof, and a shovel and waffle boards on the upper section of the rear door. 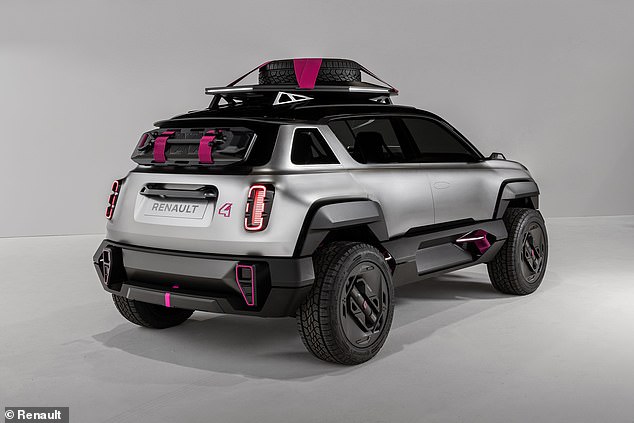 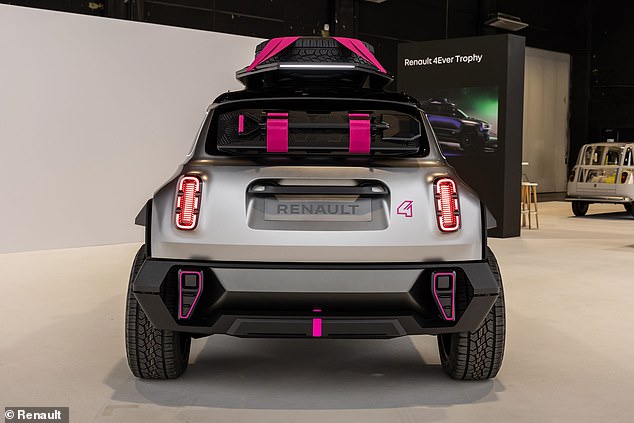 It’s ready for anything: The 4Ever is designed for adventure types and even has a spare tyre on the carbon fibre roof, and a shovel and waffle boards on the upper section of the rear door 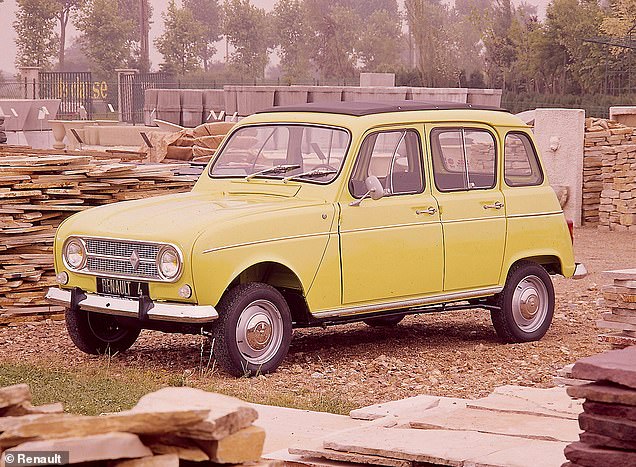 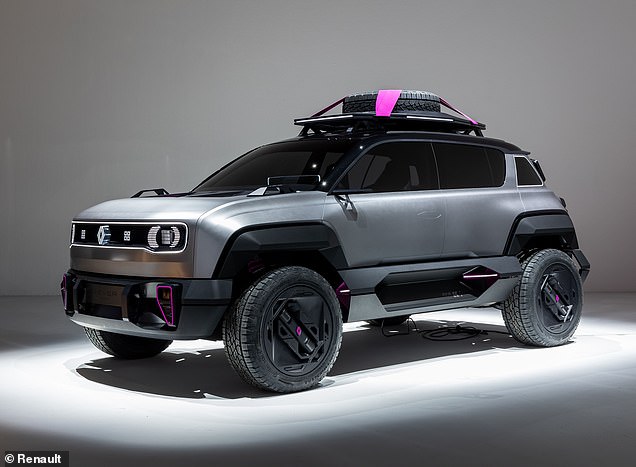 Renault stressed that the electric 4Ever Trophy puts a new twist on the original Renault 4’s iconic wide horizontal grille featuring the round, built-in lamps, by adding Matrix LED lights

Vast body protection panels on the lower section are made with a 20cm clearance around the wheel arches.

The underside has been reinforced to provide greater protection for the battery located in the middle of the chassis.

Each wheel has a visible compressor that can be readily adjusted from inside the car to adapt the tyre pressure to suit the terrain.

Linking past and present, Renault noted: ‘The Renault 4 is much more than a car: it is a true icon. With over eight million units sold in more than 100 countries, it has been crossing generational and social gaps for the past 60 years.’

It added: ‘It is as comfortable in cities as far out in the countryside, and multipurpose – you can drive it to work and on long journeys, use it to carry loads, and a lot more.’

Production was discontinued 30 years ago but the 4L has never left the limelight, said the company. Many remain on the road to this day, making it one of the original ‘young-timer vintage cars’. 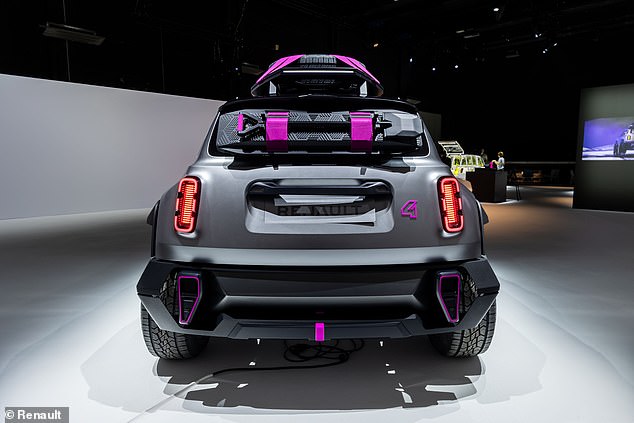 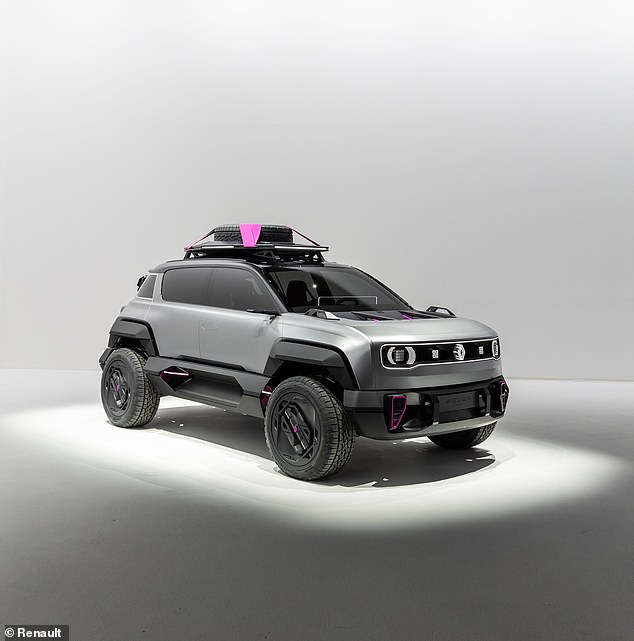 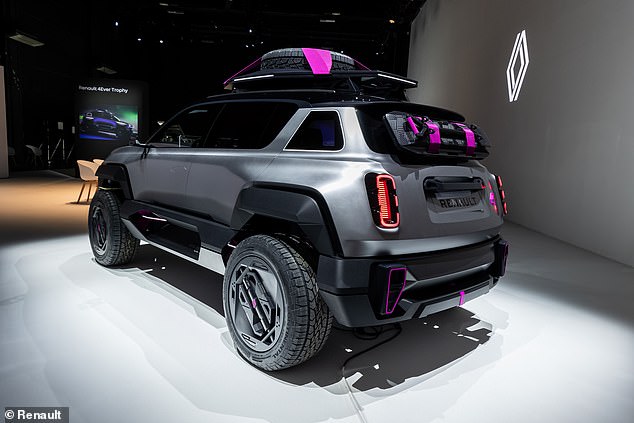 Even the wheels are clever! Each has a visible compressor that can be readily adjusted from inside the car to adapt the tyre pressure to suit the terrain

Renault noted: ‘The past 25 years have seen the 4L Trophy prove time and again its worth as a versatile car built to last. This explains why it is still a crowd pleaser, especially with the younger generations.’

The 4Ever Trophy is its second classic Renault model to get a 21st century electric reboot, following on from the Renault 5 prototype. The 5 was ‘discovered’ languishing at the back of Renault’s design studio when newly appointed CEO Luca de Meo arrived to inspect the company.

Designers told him that the previous management had no interest in a retro-inspired electric car like this, so it had been mothballed

De Meo took the opposite view and quickly ordered it into production.

That 5 proved such a success that de Meo followed it up with the new electric Renault 4.

The company said: ‘Renault, in other words, is tapping into its illustrious past to better electrify its future.’

It added: ‘The Renault 4Ever Trophy show car creates new memories while bringing back old ones. Under a muscular exterior, the stylistic ties to its 4L predecessor are evident. The original car’s main features have been revived.’ 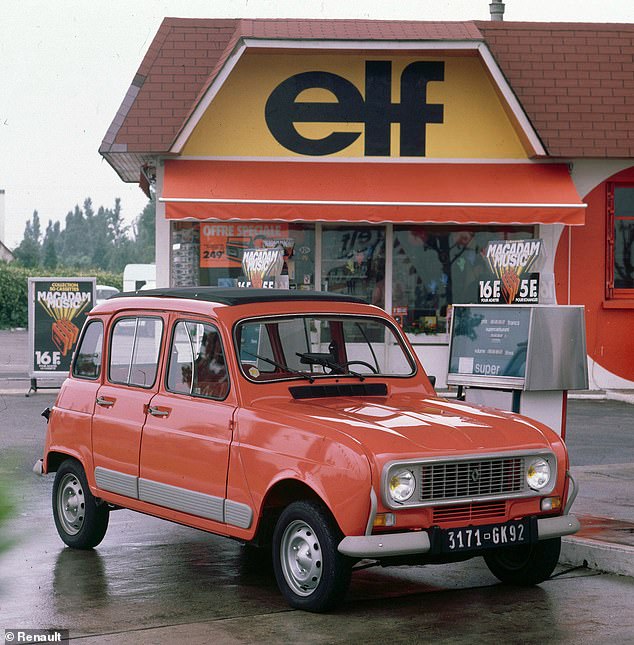 Although the original Renault 4 was sold initially as an estate, its minimal rear overhang and single top-hinged rear opening made it the world’s first mass-produced family hatchback 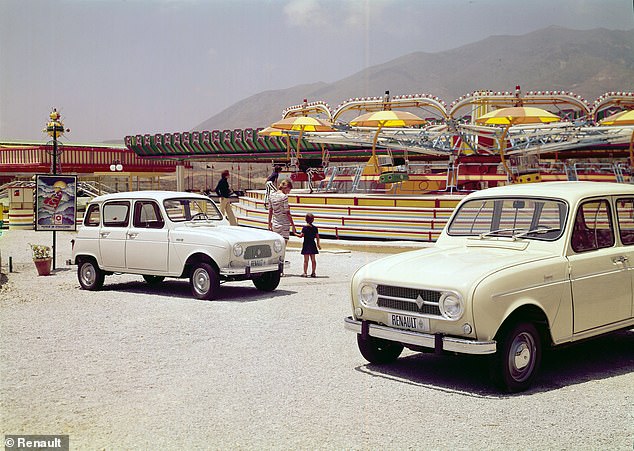 Renault sold more than eight million globally between 1962 and 1992, making the 4 one of its greatest creations ever 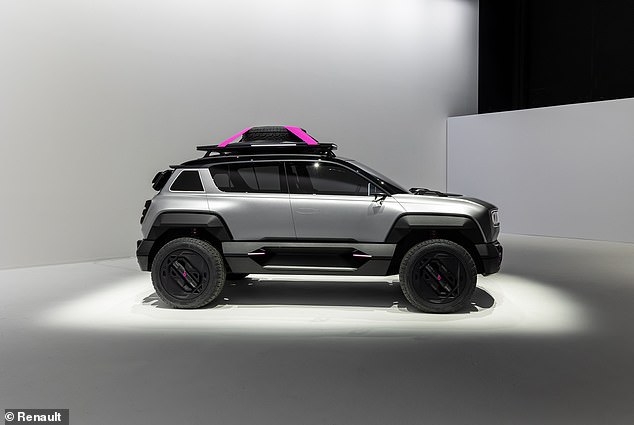 These includes: a silhouette with a prominent bonnet, bumper, and angled rear section; trapezoidal side windows with rounded corners just above the rear wheels; bare front flanks shorn of lights and stylish markers; and wings sitting atop the wheel arches.

The retro electric car features generous curves , an elaborate grille, and a honed rim around the roof, matched with an ultra tech layer of precision and modernity.

Like its predecessor, the production vehicle built off 4Ever Trophy’s design will be made in France, at Renault’s ElectriCity hub in northern France.

Renault chief executive officer Luca de Meo said: ‘The 4L is a legend. And legends never die! Today, it is this universal dimension of the 4L, a car that everyone can love, that we want to find through a modern and electric reinterpretation of the Renault 4.’

Renault design chief Gilles Vidal said: ‘To bring 4Ever Trophy into the modern era, we have infused its streamlined shape with technological sophistication

‘All these ingredients have been carefully crafted so that the design resonates with those who are familiar with the 4L and its illustrious history, and with younger generations.’