While you might think that the amount of sex you have influences your sexual satisfaction, a new study suggests that this may not be the case – at least for people with strong religious beliefs.

Researchers from the University of Exeter found that more religious people have higher sexual satisfaction, despite having less sex.

‘As religious individuals are less likely to engage in casual sex and are more likely to limit sexual activity to a relationship based on love this can lead to lower expectations of sexual activity outside a formal union, as well as increased satisfaction from sex life in general,’ said Dr Vegard Skirbekk, co-author of the study.

Researchers from the University of Exeter found that more religious people have higher sexual satisfaction, despite having less sex (stock image)

Religious people are more likely to use words like ‘happy’, ‘family’ and ‘love’ on Facebook, new research suggests.

On the other hand, non-religious individuals use ‘angry’ words and are more likely to talk about their body and death, researchers found.

Although non-religious people are more likely to talk in a negative and emotional way, they were much more willing to listen to reason than religious people.

In the study, the team set out to understand whether the frequency of sex has an impact on sexual satisfaction.

Dr Nitzan Peri-Rotem, co-author of the study, said: ‘The relationship between sex frequency and sexual satisfaction is neither simple nor straightforward.

‘Across all relationship types, too little or too much sex is associated with lower sexual satisfaction, suggesting that an optimum exists in terms of frequency related to higher satisfaction levels.’

The researchers used data on 15,162 men and women aged 18 to 59 from the British National Survey of Sexual Attitudes and Lifestyles.

Half were married, 17 per cent were living with a partner, and a fifth had no stable partner.

Somewhat unsurprisingly, the results revealed that participants who reported religion being important in their lives had less sex, largely driven by abstinence.

Despite having less sex, these participants reported being more content with their sex life overall.

However, the results showed that having no, or many sexual partners is linked to lower sexual satisfaction.

And participants who said they approved of casual sex were also found to be less satisfied.

Married women who were more religious reported higher sexual satisfaction than their less religious peers, though this was not the case for married men.

Dr Skirbekk said: ‘It is possible that religious sentiments about the sanctity of marital sex, as well as disapproval of sex outside marriage, matter more for women’s than for men’s sexual satisfaction. 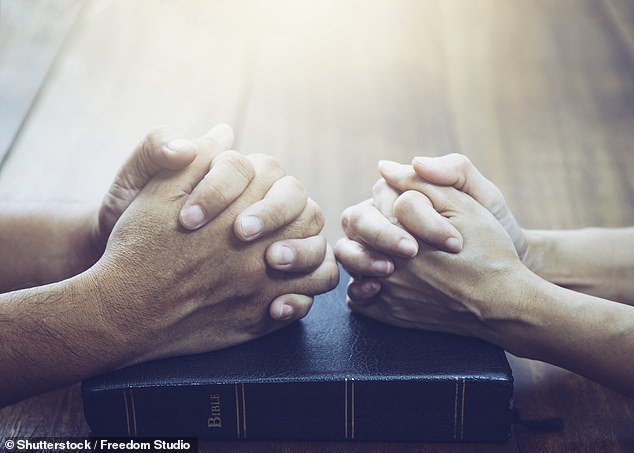 Somewhat unsurprisingly, the results revealed that participants who reported religion being important in their lives had less sex, largely driven by abstinence (stock image)

‘This is also evident by the relatively higher levels of sexual satisfaction among more religious cohabiting men when all other variables were held constant, while no similar relationship was found among cohabiting women.’

The results also revealed a significant link between education, sexual frequency and satisfaction.

‘Research suggests that changes in sexual behaviour need to be understood in a context of changes in religious norms and beliefs and other societal level trends,’ Dr Peri-Rotem added.

‘The postponement of union formation is related to less frequent sex, while also increasing the exposure to casual sex among those with weaker religious orientation.

‘For women, it is found that having no sexual partners, as well as having ten or more lifetime sexual partners is associated with lower satisfaction from sex life.

‘Among men on the other hand, no relationship is found between the number of lifetime sexual partners and sexual satisfaction.

‘However, disapproval of sex without love and of casual sex is linked with higher satisfaction from sex life among both men and women.

‘While sexual satisfaction initially increases with sex frequency, it declines again at a higher number of sex occasions.

‘Therefore, having “too much” sex may lead to lower level of satisfaction from sex life.’

ARE WE HEADING FOR A GODLESS FUTURE?

Graham Lawton, author of the new book ‘How to be Human,’ suggests that as our lives become more stable, society could become ‘godless’ as our need for religion fades away.

When children encounter religion, Mr Lawson argues they find the explanations it offers intuitively appealing and believable – making them born believers – but this instinct is drummed out of them by education.

The author claimed the reason people continue to be believe it because ‘they haven’t thought that hard about it’.

However, although the future will be increasingly secular, humans will never totally lose the god instinct.

As long as existential uncertainty exists Mr Lawton claims religion will not disappear completely – even though he believes some of the things in the bible are ‘just crazy’.

People cling onto moral guidance and existential comfort and they don’t let go of them easily, he said.

His comments are based on the cognitive theory of religion which states that belief is a by-product of our cognitive equipment.

Our brain is primed to see meaning everywhere, which helps us make sense of random events.

Children like the idea that there is order and design in the world and it is actually useful as it allows them to reason about possible threats that we cannot see, for example a predator lurking in a nearby bush.

According to Mr Lawton, although this is an evolutionary advantage, it also facilitates the build-up of delusional belief and a ‘feeling of rightness’.

‘To be an actual atheist and reject all religious ideas is not humanly possible – we’ll still fill that hole with something’, said Mr Lawton.