Relatives of the 22 victims of the Manchester bombing gathered in the city centre today, despite lockdown, to remember their loved ones on the third anniversary of the terror attack.

Social distancing guidelines meant many of the memorial services and events that have taken place previously were cancelled.

Instead, candles were lit in households, and images of bees, a symbol of defiance following the tragedy, were placed in windows.

Prayers were led by Rogers Govender, Dean of Manchester, including reading the names of those killed, during services at 9am and 4.30pm and livestreamed on the Manchester Cathedral Facebook page.

The church bells also sounded out via a recording on the radio, while families prepared their own unique tributes to those killed in the 2017 atrocity.

Two women comfort a mourner at Manchester Victoria station today, on the third anniversary of the Manchester Arena bombing 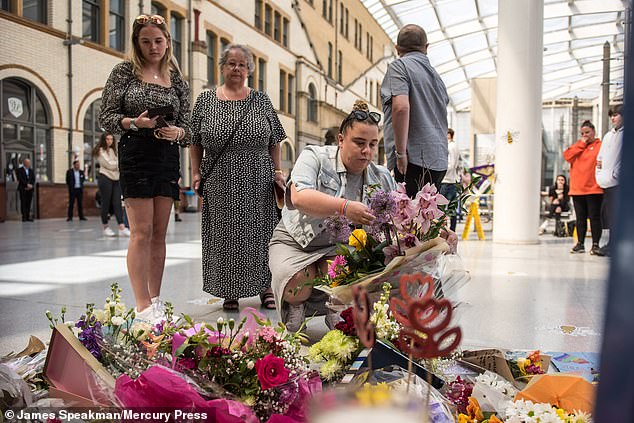 Flowers were left at Manchester Victoria station today, three years on from the atrocity which killed 22 people 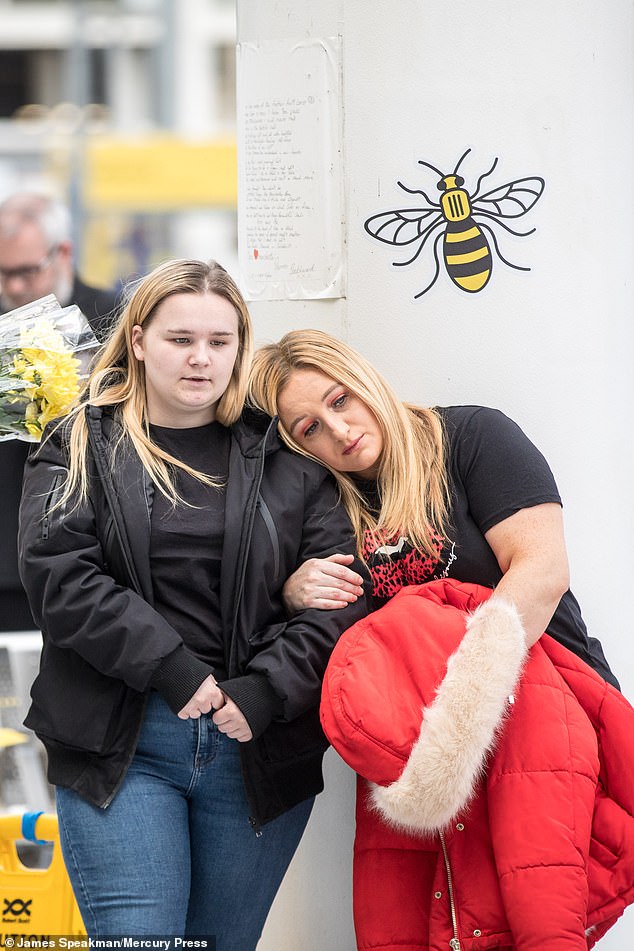 Figen Murray, the mother of 29-year-old Arena victim Martyn Hett, told the Manchester Evening News she was hoping to speak to as many of his friends as possible in video Internet chats and that they’d raise a vodka and diet Coke in his memory.

However, some mourners still made their way to Manchester Victoria station today to lay flowers and remember the victims who travelled to watch an Ariana Grande concert, but never returned home.

It comes as the popstar’s manager admitted: ‘She has PTSD, she’s still suffering to this day.’

Meanwhile a planning application for a new permanent memorial is expected to go before the city council next month.

The design, named Glade Of Light and intended to be installed on Fennel Street near the cathedral, is designed to be a tranquil garden space, with a planting scheme planned to ensure year-round colour and reflect the changing seasons.

It will also have a white stone ring which will carry the names of the 22 victims.

Today, an 18-year-old who survived the attack has spoken of the ‘strange ups and downs’ of life after the attack. 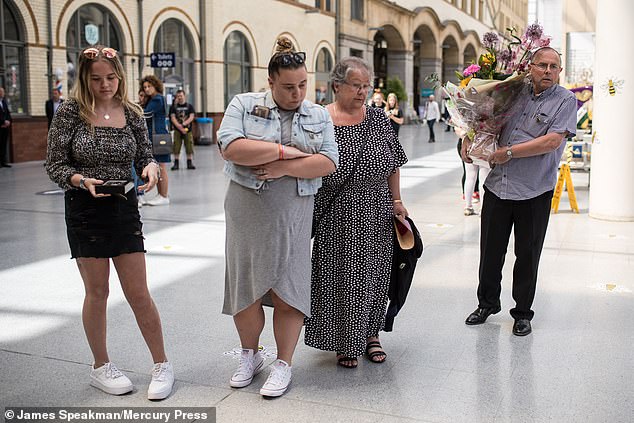 While some made their way into the city centre today, many others paid tribute at home 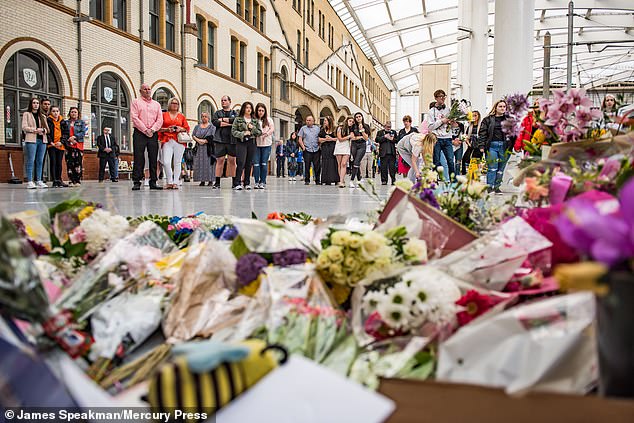 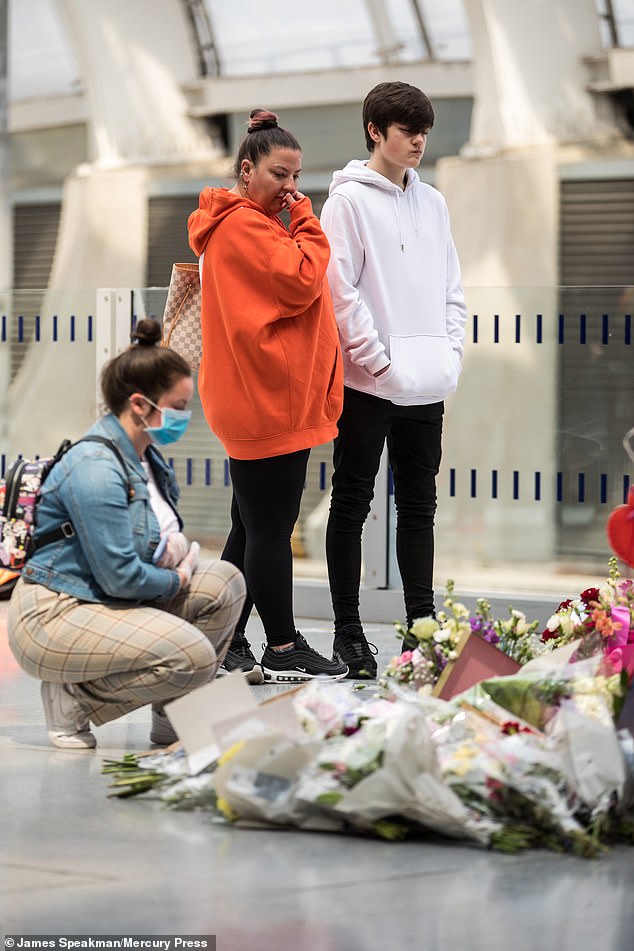 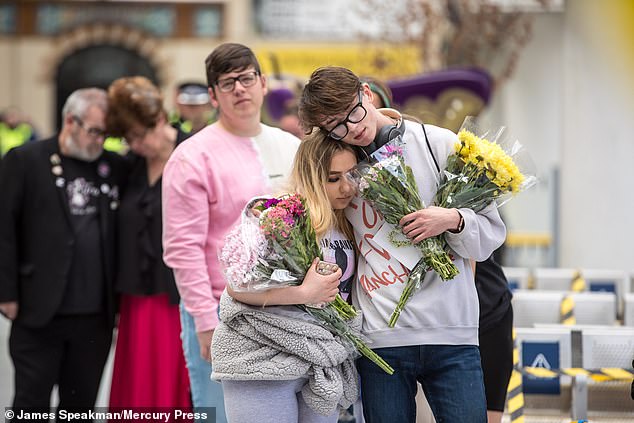 Adam Lawler was with his best friend Olivia Campbell-Hardy, 15, who tragically lost her life.

In an interview on BBC Radio 6 Music, Adam spoke of the moments before the bomb went off.

He said: ‘I remember a very nice concert, I’d not been to many concerts beforehand and I’d always considered Ariana Grande a bit of a guilty pleasure’.

He recalled asking Olivia what her favourite song was, before he suddenly felt like he had been ‘knocked over and trampled’.

‘This was in fact the impact of the bomb and the concussion’, he told host Chris Hawkins.

‘The next thing I remember is I woke up and didn’t know where I was. I turned round and all I could see was dead bodies. Memories from that night are actually quite graphic and many in detail’, the teenager said. 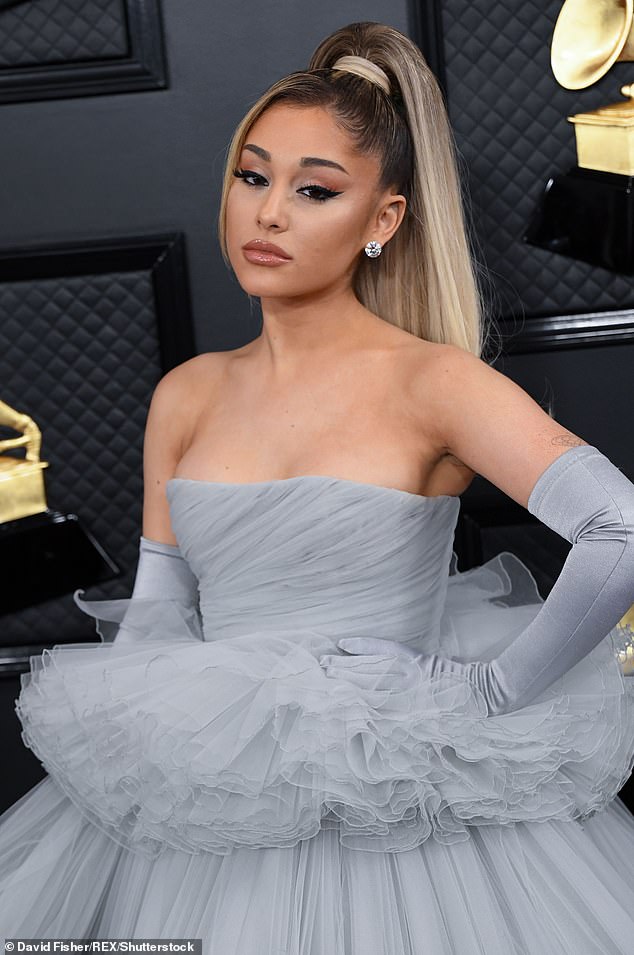 The manager of Ariana Grande, pictured, admitted the singer is still suffering from PTSD 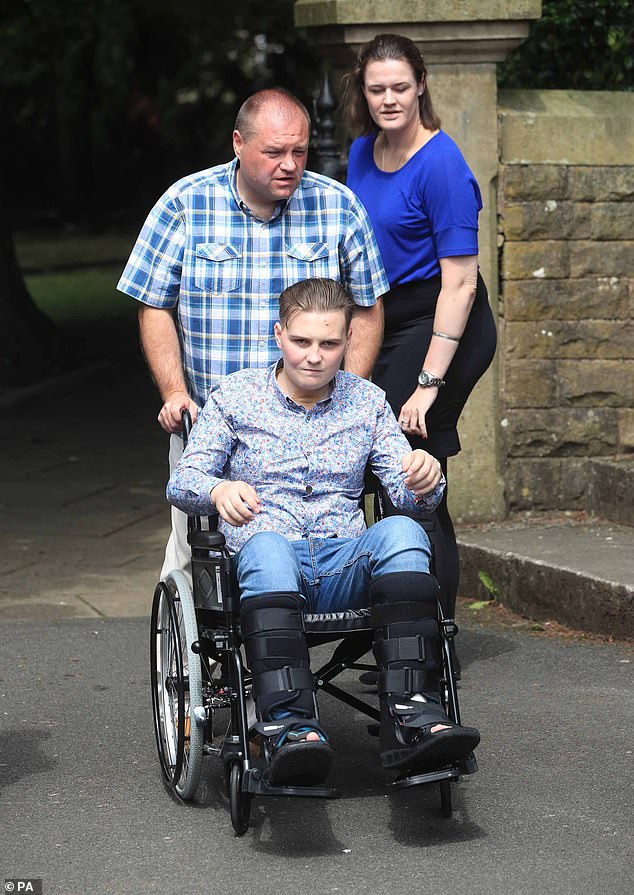 Adam Lawler, pictured in a wheelchair, who survived the attack has spoken today of the ‘strange ups and downs’ of life after the attack

Asked how life has been for him since the ordeal, he said: ‘It’s been strange, it’s been a lot of ups and downs.

‘It’s always been about the future for me. It’s not so much dwelling on the past. It is learning and growing from the past.’

He has been back to the Arena several times since the bomb, he said.

The first time he went back for a gig was when he went to see the Arctic Monkeys in 2018.

He was introduced to the band through a friend.

‘It was a great gig, a great experience and an unforgettable night.’

Adam then introduced the next song on the show, Are You Mine by Artic Monkeys.

‘Still only 18, inspirational. His positivity is a reminder for all of us to stay strong in these strange times. It will get better,’ he said.