Regular vape users could be putting themselves at risk of suffering obstructions to their lungs’ airways and asthma like symptoms, a new study finds.

Researchers at Harvard University found that chronic vapers were suffering severe lung damage after years of using the devices – a worrying prospect as prevalence of the devices grows among teenagers and young adults.

Nearly 10 percent of Americans – and more than one-in-four high schoolers – are regular e-cigarette users, according to official figures. The devices have been the target of regulators during the Biden administration, with many fearing that their proliferation will cause a surge in lung issues like cancer, popcorn lung, and COPD in the coming decades.

Dr Panagis Galiatsatos, director of the Tobacco Treatment Clinic at John’s Hopkins University in Baltimore, Maryland, told DailyMail.com that these findings are not surprising, but should serve as a warning that vaping can cause significant lung damage and carries more risks than many may believe.

A study finds that people who used e-cigarettes regularly for three or more years suffered damage to their airways of their lungs, and symptoms similar to asthma (file photo)

‘Our investigation shows that chronic pathological abnormalities can occur in vaping exposure,’ Dr David Christiani, a professor of medicine at Harvard and senior author of the study, said in a statement.

Researchers, who published their findings in the New England Journal of Medicine Evidence on Monday, performed case studies of four chronic vape users for the study. 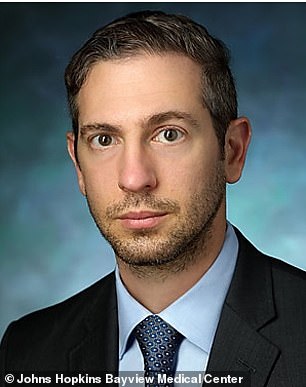 Dr Panagis Galiatsatos, director of the Tobacco Treatment Clinic at John’s Hopkins, warns that younger vape users are potentially causing permanent damage to their lungs by using the devices

Each had between a three-to-eight year history of using the devices, and all were suffering from some sort of chronic lung disease.

The patients all underwent clinical evaluations that included chest imaging, tests of their lung functions and a lung biopsy – where small amounts of tissue are removed and tested for cancer or other disease.

All of the patients were suffering from some form of lung damage. They suffered from small airway obstructions, similar to what a person may suffer when they have asthma.

Galiatsatos said that these types of obstruction can make it hard for a person to exhale, leading to them developing a chronic cough.

Researchers also found a protein in the mucus layer of the lungs, which can obstruct the lung’s airways.

‘All four individuals we studied had injury localized to the same anatomic location within the lung, manifesting as small airway-centered fibrosis with constrictive bronchiolitis, which was attributed to vaping after thorough clinical evaluations excluded other possible causes,’ Dr Lida Hariri, an associate professor at Harvard and lead author of the study, said in a statement.

While some may see vape and e-cigarette devices as safe alternatives to cigarettes, experts warn that users can develop the devastating condition ‘popcorn lung’ – and that those who suffer the most severe case are unlikely to survive.

Bronchiolitis obliterans, the official medical diagnosis for popcorn lung, occurs when a person’s lungs become significantly scarred due to the inhalation of dangerous chemicals or via an infection of some sort.

Experts are warning that many users of electronic nicotine devices – like Juuls – are developing the condition at alarming rates, especially at younger ages where these types of conditions are rare.

Dr Panagis Galiatsatos, director of the Tobacco Treatment Clinic at Johns Hopkins University tells DailyMail.com that those who suffer the most severe cases of the condition will likely die from respiratory failure within five years of it developing.

Controversy around these devices has reemerged in recent weeks after the Food and Drug Administration chose to pull Juul products from shelves, before allowing the company temporary reprieve as it reevaluated its decision.

‘We also observed that when patients ceased vaping, they had a partial reversal of the condition over one to four years, though not complete due to residual scarring in the lung tissue,’ Hariri explained.

The findings are still worrying for Galiatsatos, though. as many younger vape users are significantly damaging their lungs before they are even finished developing.

‘The lungs are still growing [in younger age groups],’ he explained.

‘Your lungs really continue rolling up until about the age of 35. So if you’re introducing things that are causing pulmonary symptoms that early, you’re setting up to be chronic patients.

‘Maybe there’s a reversibility to it, if we can get them off the products, but if they continue to use it we’re looking at a permanent damage that may be irreversible.’

Vaping and e-cigarette use among younger Americans has been described as a ‘crisis’ by leading health officials, like Dr Sunjay Gupta.

Around two million U.S. teenagers report using the devices regularly – with the number having spiked in recent years.

Many are unaware of the dangers of the devices either. While use of e-cigarettes has not been linked to cancer in the same way that cigarettes have, Galiatsatos warns that other conditions like ‘popcorn lung’, COPD and asthma could strike frequent vapers.

‘There are plenty of other scary non cancer things that can happen to the lungs when you introduce noxious chemicals,’ he explained.

‘That should always gain our concern. Right? Chronic lung diseases are a top three causes of global deaths around the world.’

Preventing spikes conditions tied to nicotine use have become a priority for U.S. regulators in recent years.

To limit rises in teen smoking, the FDA banned fruit flavored e-cigarette devices, and forced each company to apply individually to allow their products to remain on shelves.

Juul Labs, whose products became the face of the dangerous underage smoking trend after they shot to popularity in the 2010s, had its application rejected by the FDA in June.

The devices were temporarily pulled from shelves before the FDA issued a stay on its decision to give the agency time to review more scientific evidence.