For 50 years, 11,000 hours of audio recorded during the Apollo 11 mission had been sitting dormant.

Ben Feist created a new way to organize, sort, fix and go through audio from space missions. Now, the Regina-born man has landed a job at the National Aeronautics and Space Administration (NASA).

Feist started by creating a website called Apollo17.org that recreates the last mission to the moon in real time.

“It’s 302 hours and it contains all of the footage all of the photographs taken and everything spoken on the mission,” he said. “So you can jump in and sort of ride along with the crew.”

“And one day NASA called me and said ‘Cool website,'” he said. “And I went ‘Oh my goodness you’re from NASA.'”

The person on the phone was Noah Petro, Feist said. Petro is the lead scientist on the Lunar Reconnaissance Orbiter Mission that currently has a satellite mapping the moon.

“He said that the work that I had done might be the answer to how future missions can organize their mission data better.”

Feist was asked to come to NASA and present his work. Now he works for the space agency. 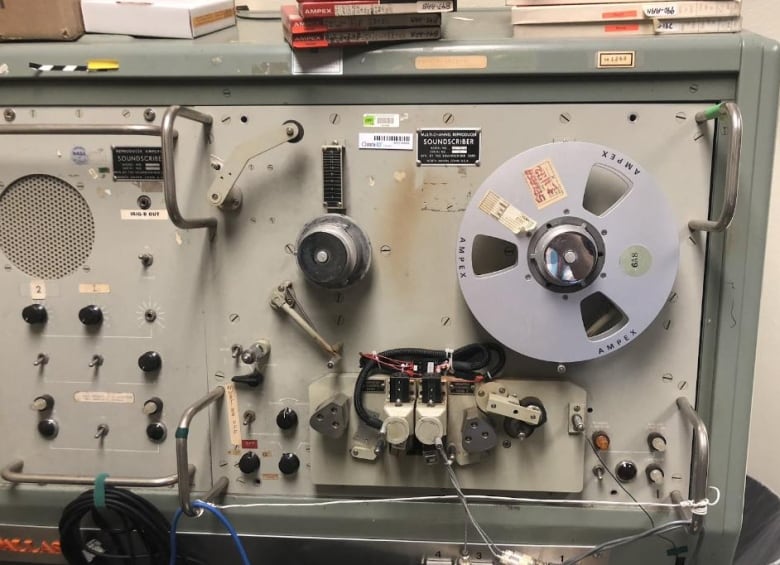 The Apollo mission was recorded on 30-track tapes, meaning 30 voices or places could be recorded at one time. (Submitted by Ben Feist) 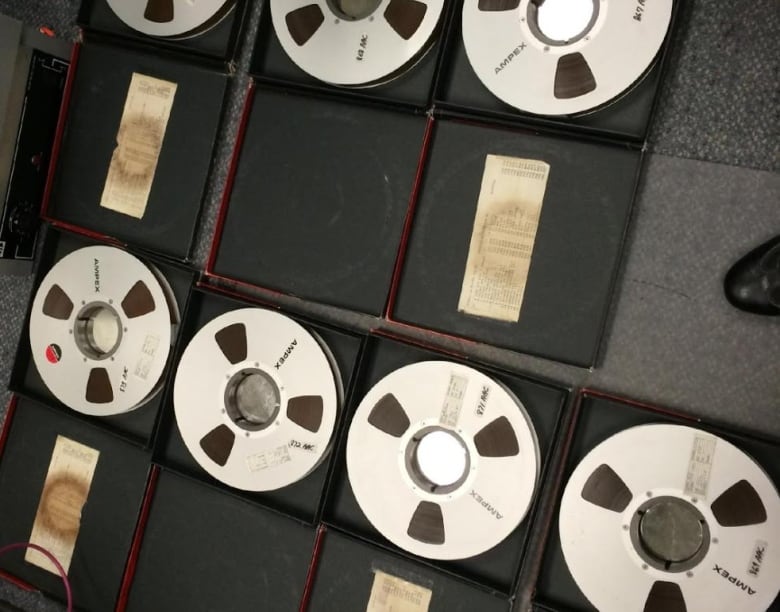 Feist said there was an immense amount of audio to go through.

“There were historical recorders that were recording everything that was said in mission control and they would use the tapes if anything went wrong,” he said.

The recorders captured 60 channels of audio.

“Tapes from these have been in the National Archives for the last 50 years with no machinery that could play them back. They knew what they were but they were just sitting there.” 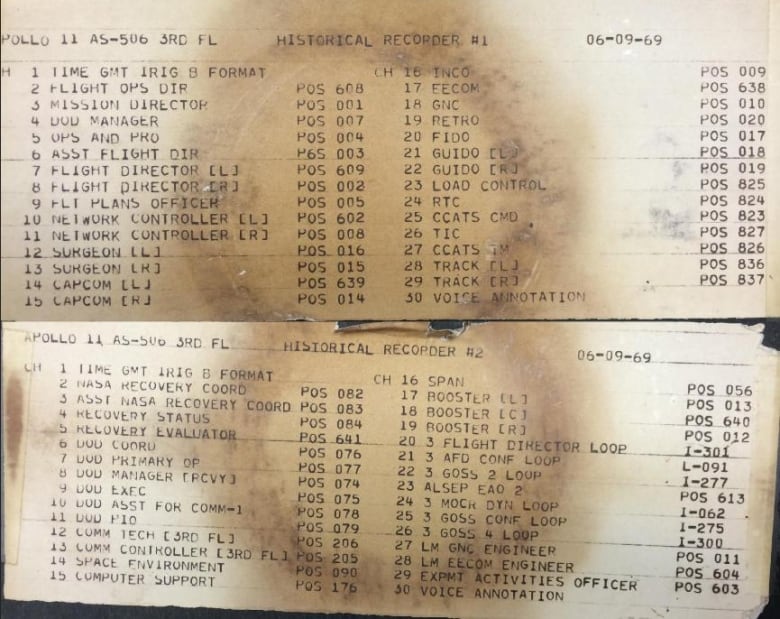 The Apollo 11 audio was classified with channels and logged in historical records. (Submitted by Ben Feist)

Feist and another audio engineer figured out how to fix some audio issues in the recordings and make them searchable. He went through about 11,000 hours of audio for the parts he wanted for the film.

“This material is so rich in its ability to explain who everybody was in mission control and what was it like to work there,” he said. 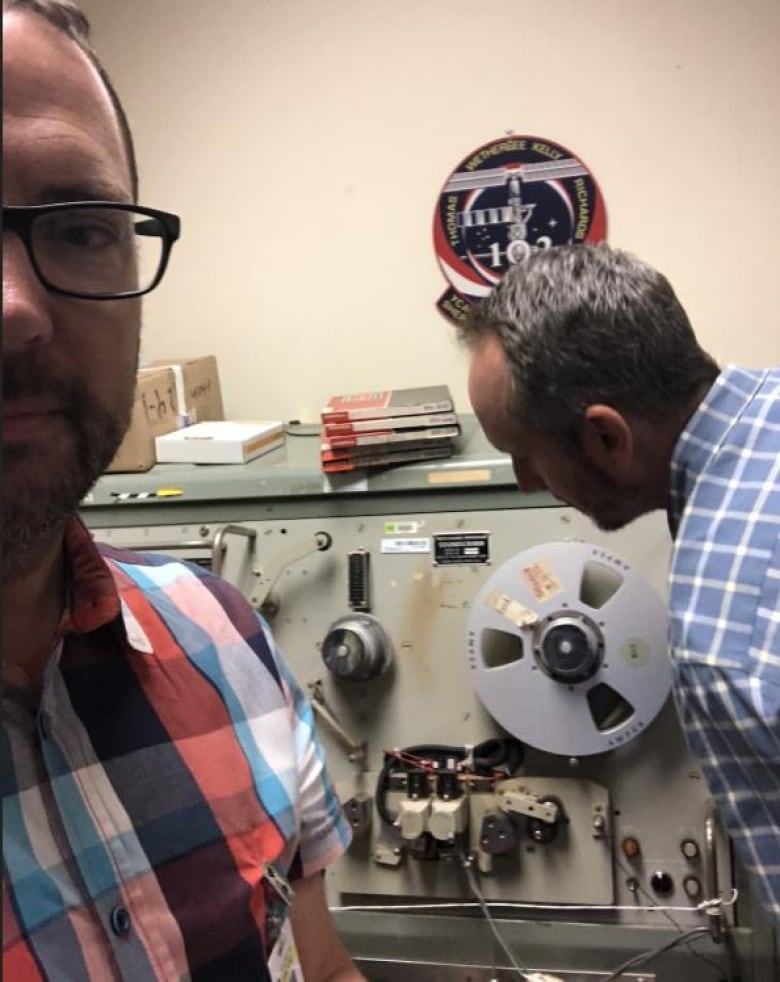 “It can get away a little bit from the more legendary status of mission control having the ‘right stuff’ and all being perfect. Instead, you can kind of understand ‘Oh look they’re just like people today and they were still able to achieve this amazing feat.”

Feist said it just keeps getting better. He’s being contacted by people about the other missions and he is working for NASA to help manage their mission data in a new way.

“You can imagine it would be a dream for somebody like me to work here,” Feist said.

“It’s also exciting because they’ve stated that they’re going back to the moon by the end of the 2020s,” he said. “And I might be able to help with that.”

Feist said he didn’t plan on working at NASA when he first started processing audio.

“I was just trying to make something that I thought would be cool,” he said.

“I think my real rule is just say yes to anything that comes your way and you never know where it’s going to lead.” 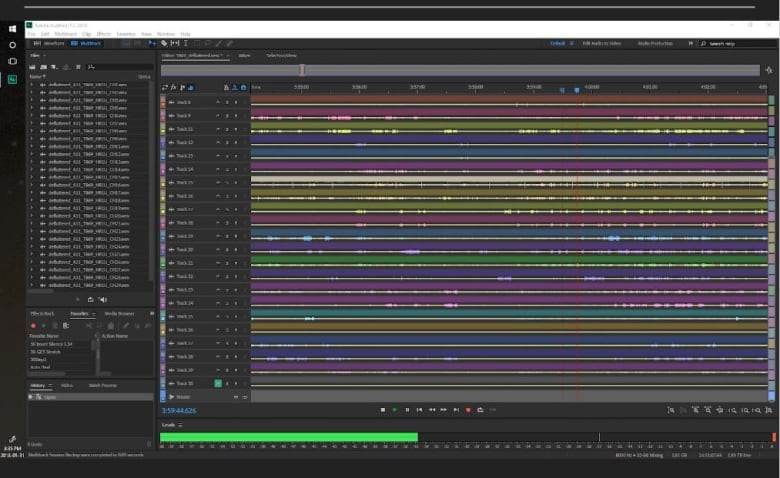 A screen grab from Ben Feist’s computer shows the 30 tracks at once recording from the Apollo 11 mission. (Submitted by Ben Feist)