Toni Kroos left stunned after being given a yellow card for a ‘ghost tackle’ in Real Madrid’s Copa del Rey victory over Elche… as the German midfielder was accused of fouling opponent even though he was nowhere near him!

Toni Kroos was left reeling after the Real Madrid midfielder picked up a yellow card for a ‘ghost tackle’ on Elche’s Tete Morente in their Copa del Rey victory on Thursday.

The German midfielder went in for a challenge late in the second-half but failed to make connection with either the ball or the man, but Elche substitute Morente fell to the ground and referee Jorge Figueroa Vazquez blew for a free-kick.

Replays confirmed that Kroos was nowhere near Morente when he went to ground and protested his innocence with the official, who showed him a yellow card as he complained about the call. 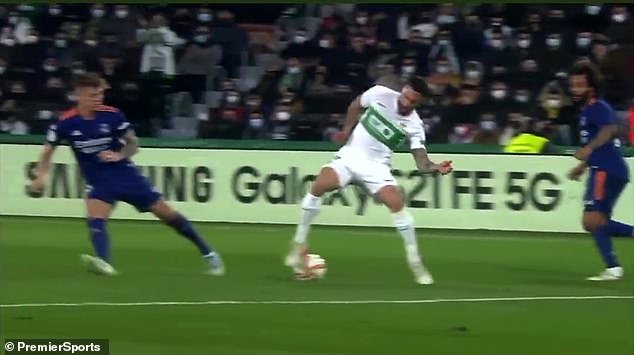 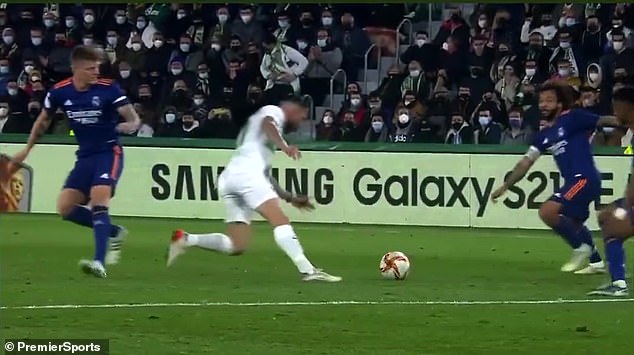 Kroos would end up being substituted on the stroke of extra-time as Carlo Ancelotti’s men were held to a 0-0 draw, which forced an additional 30-minute period.

Los Blancos then fell behind just before half-time in the extra-time period as substitute Gonzalo Verdu put Elche into a shock-lead, just moments after Real defender Marcelo was sent off for a red card.

But Ancelotti’s men were able to turn the tide in the second 15-minute period as Isco fired in an equaliser, before Eden Hazard netted a breakaway goal seven minutes later to complete the comeback.

Real are now through to the quarter-final stage of Spanish football’s most prestigious domestic up, with Ancelotti’s side now heavy favourites to claim the trophy. 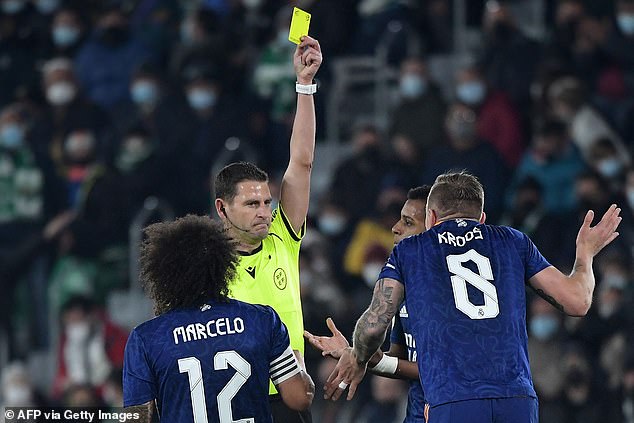 Barcelona exited the tournament on Thursday night after they were beaten 3-2 in extra-time by Athletic Bilbao. New Catalans striker Ferran Torres cancelled out Iker Munain’s early opener but Inigo Martinez put Athletic in front on 86 minutes.

Barcelona youngster Pedri equalised for the club deep into stoppage time to force extra-time, but Munain scored a penalty towards the end of the first 15-minute period.

Xavi’s Catalans joined Atletico Madrid in being eliminated after Diego Simeone’s side lost 2-0 to Real Sociedad on Wednesday.

Former Premier League players Adnan Januzaj and Alexander Sorloth netted either side of half-time for Sociedad as they look to replicate their 2020 title win from earlier this year.