Senator Pauline Hanson has come out in support of construction workers protesting in Melbourne with a controversial social media post.

The One Nation leader posted an image with the phrase ‘Building Lives Matter’ to her Twitter and Facebook accounts on Wednesday night.

The image was accompanied by a caption stating: ‘@OneNationAus stands with construction workers fighting for freedom of choice!’

Melbourne has been rocked by three straight days of protests which started over mandatory vaccinations for constructions workers and ballooned into wider unrest. 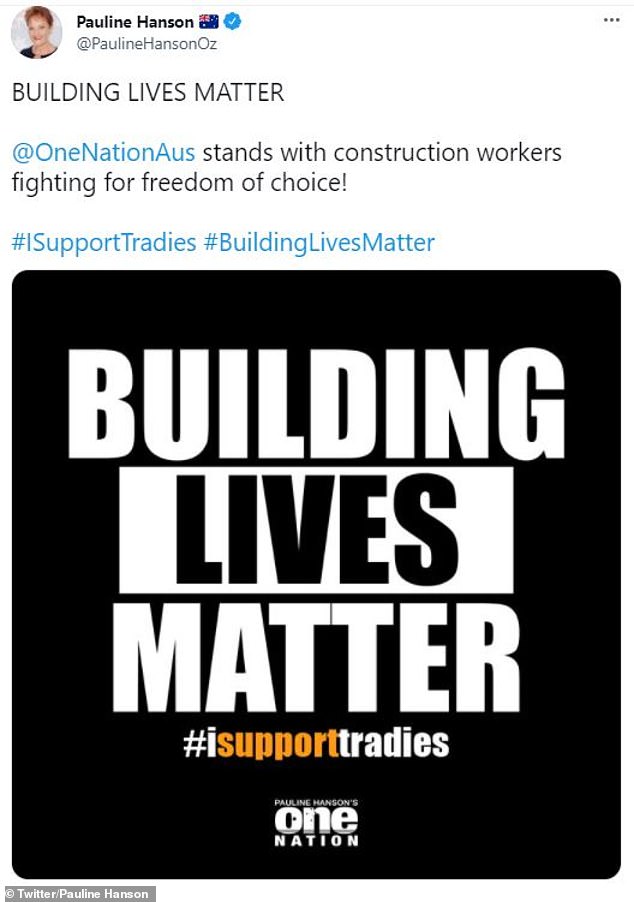 Both Senator Hanson and Mark Latham, NSW One Nation MP, posted the image (pictured) supporting those protesting against mandatory vaccinations for construction workers

Senator Hanson is the founder of the right-wing populist party and has previously been criticised for her references to the Black Lives Matter movement against racially motivated violence and police brutality.

Many of her followers shared her support for the Melbourne protestors and praised her ‘building lives matter’ slogan.

‘You’re always there for the average bloke … love your work champion,’ one wrote.

‘Good on you Pauline, it’s just a shame so many people miss your point,’ wrote another on Facebook.

‘I don’t always agree with everything you say, but you are a true patriot Pauline. You have a genuine love for this country and its people,’ said another supporter.

But some social media users objected to Senator Hanson’s support for the protesters.

‘Do you condemn the thuggish violence?’ one asked on Twitter.

‘She’s clearly protesting the earthquake that happened today! Poor buildings don’t need to be put through that extra stress,’ another joked.

‘This uninformed conspiracy nonsense is incredibly hurtful to the families of the victims. Please stop,’ one user wrote.

It is also not the first time Senator Hanson has spoken out against mandatory vaccinations.

She has been reprimanded by health officials for making false claims about vaccinations and saying people should have the right to choose to catch the virus and deal with the consequences.

She has also made claims the government have been using lockdowns as a ‘bullying tactic’ to push residents into getting the vaccine. 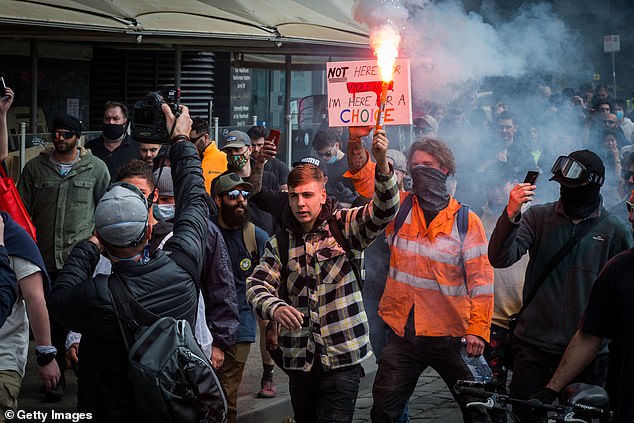 The violent protests (pictured) have been going on for three days in Melbourne, with anti-vaxxers, anti-lockdown and other members of fringe groups clashing with police

Liberal senator Amanda Stoker was also criticised for her response to the protests.

She condemned the violence, but said the demonstrations reflected the effect of lockdown and a heavy-handed police approach.

The violent rallies began on Monday at the Construction, Forestry, Maritime, Mining and Energy Union (CFMEU) headquarters where construction workers gathered to protest mandatory vaccines and other government-imposed Covid regulations.

CFMEU boss John Setka said the majority of Monday’s protesters were non-union members, and blamed neo-Nazis and ‘right wing infiltrators’ for the violence.

During global demonstrations over the death of George Floyd in Minneapolis, Ms Hanson attempted to put forward an ‘all lives matter’ motion in the Senate.

Her motion was denied formality by an overwhelming majority and did not proceed to a vote, with one senator walking out in protest. 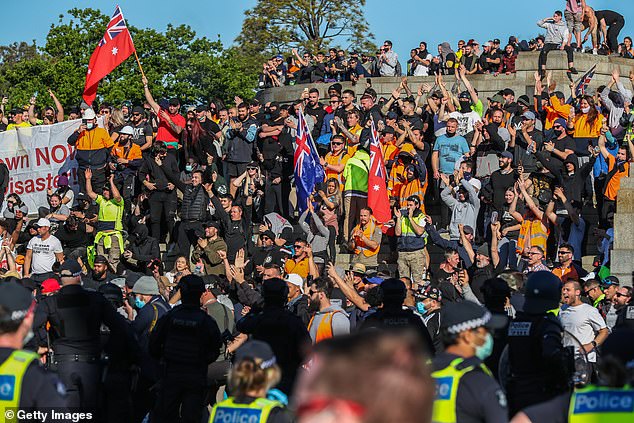 The violent rallies (pictured) began on Monday at the Construction, Forestry, Maritime, Mining and Energy Union headquarters with the union swift to separate the protests from themselves and condemning the actions of protestors