Indigenous Services Minister Marc Miller says the Mi’kmaw fishermen in Nova Scotia have been “let down by police,” following increasing violence in the southwest part of the province over the Sipekne’katik band’s fishery.

“We must also recognize that once again, as evidenced by the scenes of violence, Indigenous people have been let down by the police. Those who are sworn to protect them,” he said during a news conference in Ottawa on Monday morning.

“Throughout history, Indigenous peoples have experienced continuous discrimination and to this day still suffer the consequences of colonial practices, but they have shown an extreme resilience and courage in standing up for their rights.”

The four Liberal cabinet ministers have joined the NDP in calling for an emergency debate in the House of Commons on the escalating fight between commercial fishermen and Mi’kmaw fishers in southwest Nova Scotia, which has become increasingly violent in the last week.

Two lobster facilities in southwest Nova Scotia were targeted and vandalized by commercial fishermen last week. One of the facilities, located in Middle West Pubnico, N.S., was destroyed in a Saturday blaze RCMP have deemed suspicious.

A Digby County, N.S., man has also been arrested and charged in relation to an assault on Sipekne’katik First Nation Chief Mike Sack.

The RCMP’s response to the violence has been met with criticism.

“In the case of violence, intimidation and terrorist activities, the RCMP has done little to protect the rights of Indigenous people who are practising their treaty rights,” said NDP MP Charlie Angus, the party’s ethics critic during a separate news conference Monday morning.

“We are calling on the federal government today to send a clear message to the RCMP that this refusal to defend the non-violent treaty rights of Indigenous people … is not acceptable.” 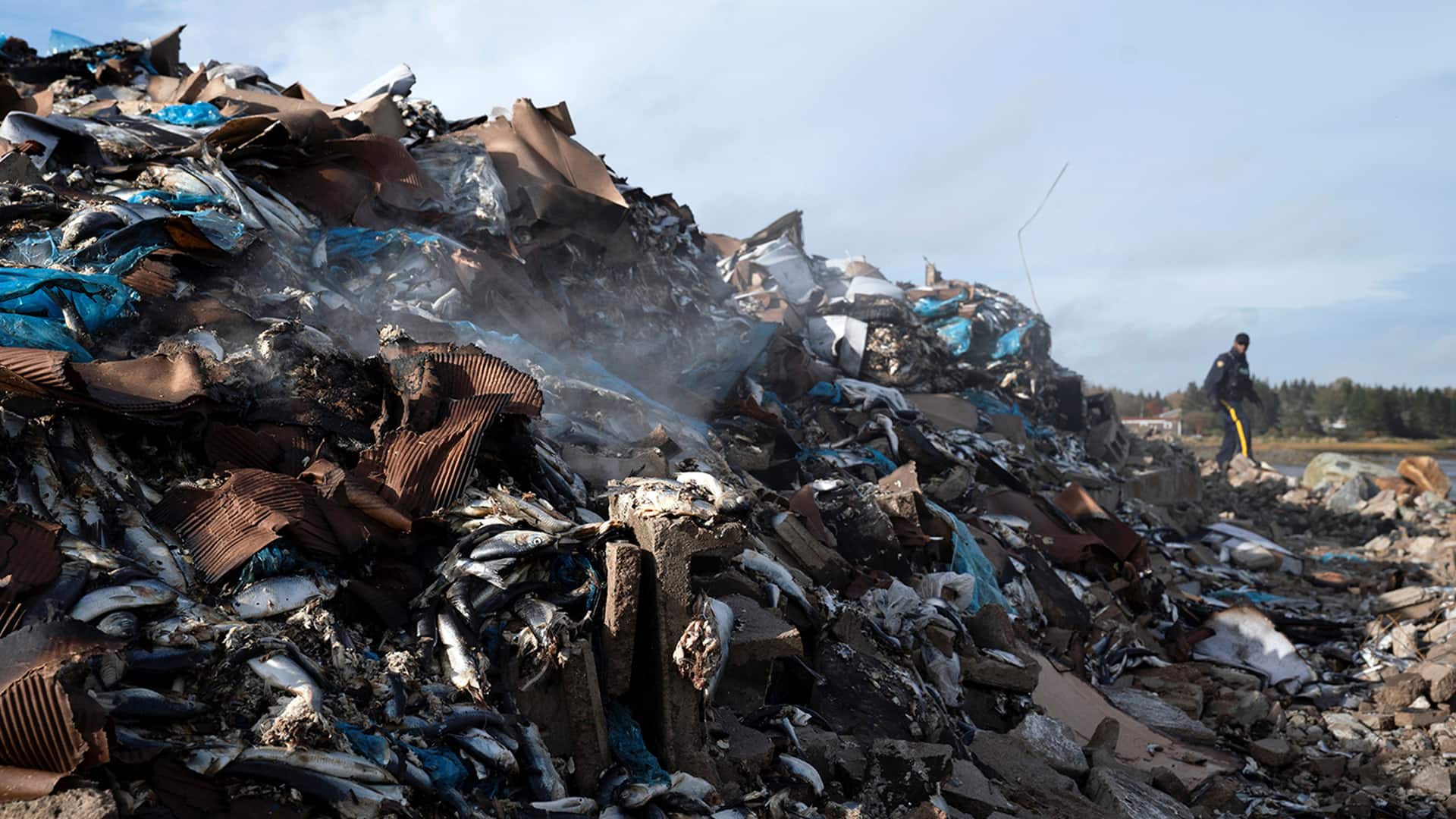 The tense standoff between Mi’kmaw lobster fishers and commercial fishermen saw a dangerous acceleration over the weekend, with the burning of a lobster storage facility where Mi’kmaw fishers were storing their catches. RCMP have called in reinforcements in hopes of de-escalating the situation. 2:33

Blair said he has spoken to RCMP Commissioner Brenda Lucki about the force’s responsibility.

“The violence and harassment and intimidation that we have seen in Nova Scotia are completely unacceptable, cannot continue and must stop now,”  he said Monday.

“The reckless violence and the racist threats we have seen do nothing to bring us closer to a resolution,”

Blair, whose portfolio includes the RCMP, agreed to a request from Nova Scotia’s attorney general to boost the RCMP’s presence in the region.

“I’ve spoken this morning and over the weekend to the RCMP commissioner and she has assured me that she has the resources necessary to manage the situation on the ground and uphold the law,” he said.

Commercial fishermen in Nova Scotia have been protesting the fishery launched by Sipekne’katik First Nation last month, a right affirmed by a 1999 Supreme Court ruling.

The 21-year-old decision, known as the Marshall decision, affirmed the Mi’kmaw right to operate a “moderate livelihood” fishery.

The court said the federal government could regulate the Mi’kmaw fishery but must justify any restrictions it placed on it.

The new Sipekne’katik fishery operates outside the federally mandated commercial season, with fishermen on that side saying they worry about its impact on lobster conservation.

“We do see a path forward,” she said.

House Speaker Anthony Rota will decide later today whether the ongoing situation in Nova Scotia will proceed to a debate today.

The request for an emergency debate was first sent by NDP MP Gord Johns on Sunday.

“Sadly, insufficient action has been taken by the federal government to ensure the safety of this community and its fishers, nor to deal with the underlying legal and constitutional issues, which are its root cause,” the critic for fisheries and oceans wrote.

New Democrats will call for an Emergency Debate in Parliament on <a href=”https://twitter.com/hashtag/MikmaqRights?src=hash&amp;ref_src=twsrc%5Etfw”>#MikmaqRights</a>.<br><br>The Mi’kmaq people have been terrorized.<br><br>Justin Trudeau must take immediate action.<br><br>For updates, text me “Yes” at 604-200-3470. <a href=”https://t.co/0XtFsJfDG1″>pic.twitter.com/0XtFsJfDG1</a>