Scores of mourners, some dressed all in white or in Black Lives Matter shirts, filed into the historic Atlanta church once led by Reverend Martin Luther King Jr. on Tuesday for the funeral service of Rayshard Brooks, the black man whose killing by a white police officer at a fast-food drive-thru last week has stoked protests against racial injustice across the US.

About 200 family members and friends gathered at Ebenezer Baptist Church to pay their final respects to the 27-year-old at the invitation-only ceremony, following a procession with a white hearse carrying his body.

Some bystanders stopped and faced the procession, raising clenched fists in the air. Meanwhile, on the far side of the church, under a big tent, about 50 people sitting in folding chairs watched the service on a jumbotron.

The famous church is where King preached until his assassination in 1968 and has since been steeped in the black struggle for civil rights.

King’s daughter, Rev. Bernice King, delivered a powerful eulogy, along with a friend of Brooks, his mother-in-law and senior pastor Rev. Raphael Warnock.

‘We are here because individuals continue to hide behind badges and trainings and policies and procedures rather than regarding the humanity of others in general and Black lives specifically,’ said Reverend King. 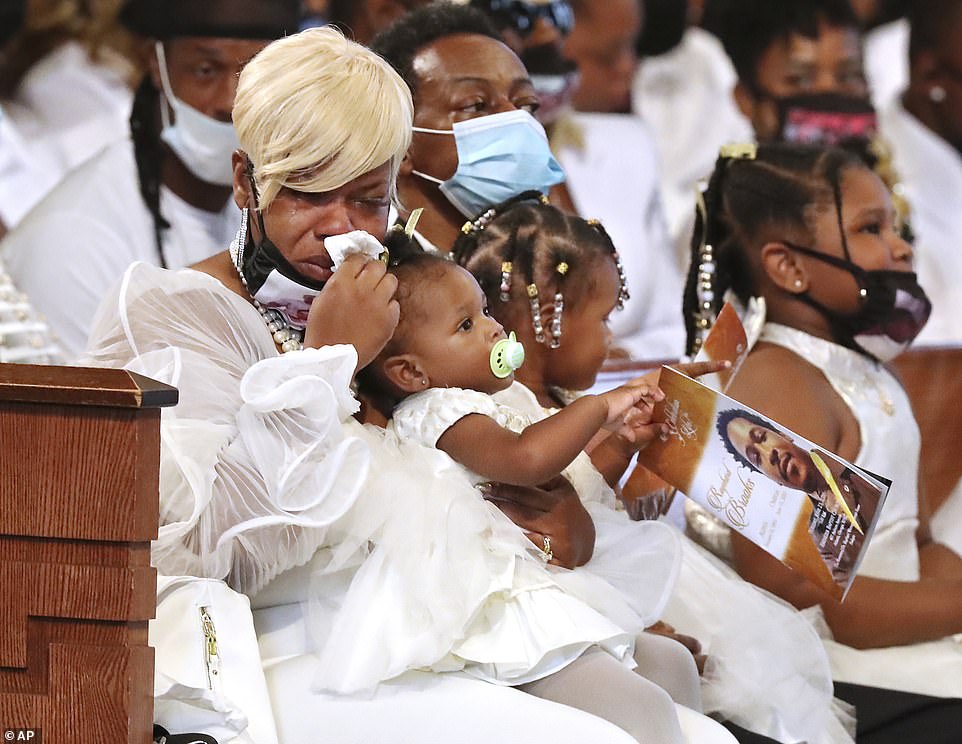 Tomika Miller, Brooks’s widow and mother of their three children broke down in tears during the emotional service on Tuesday 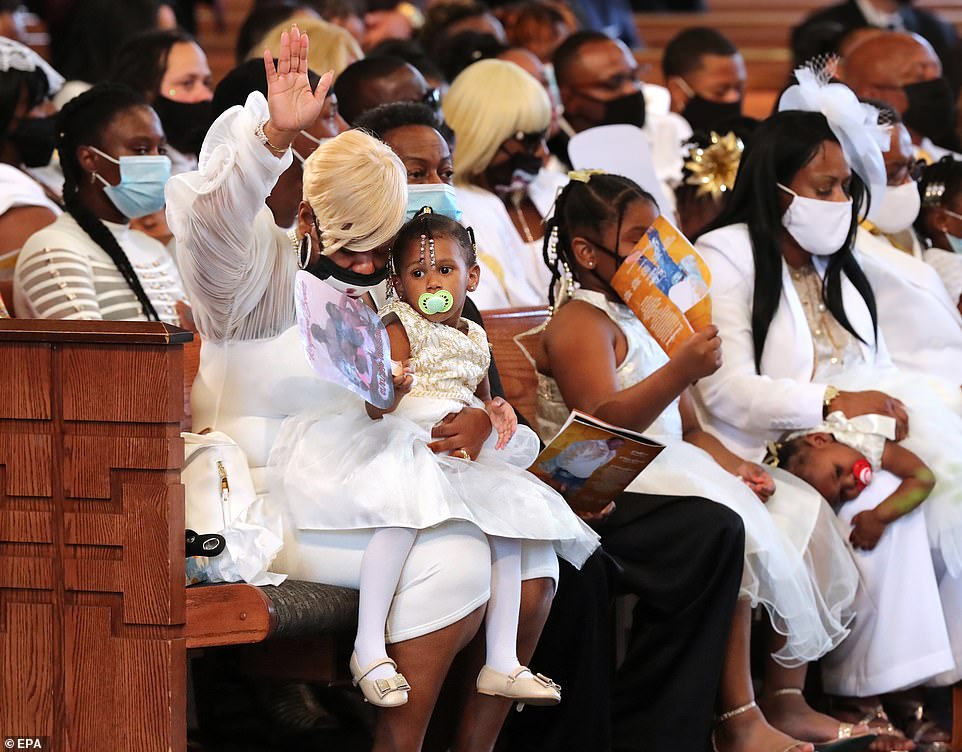 Miller was seen holding the couple’s two-year-old daughter Memory, and raising her hand in the air 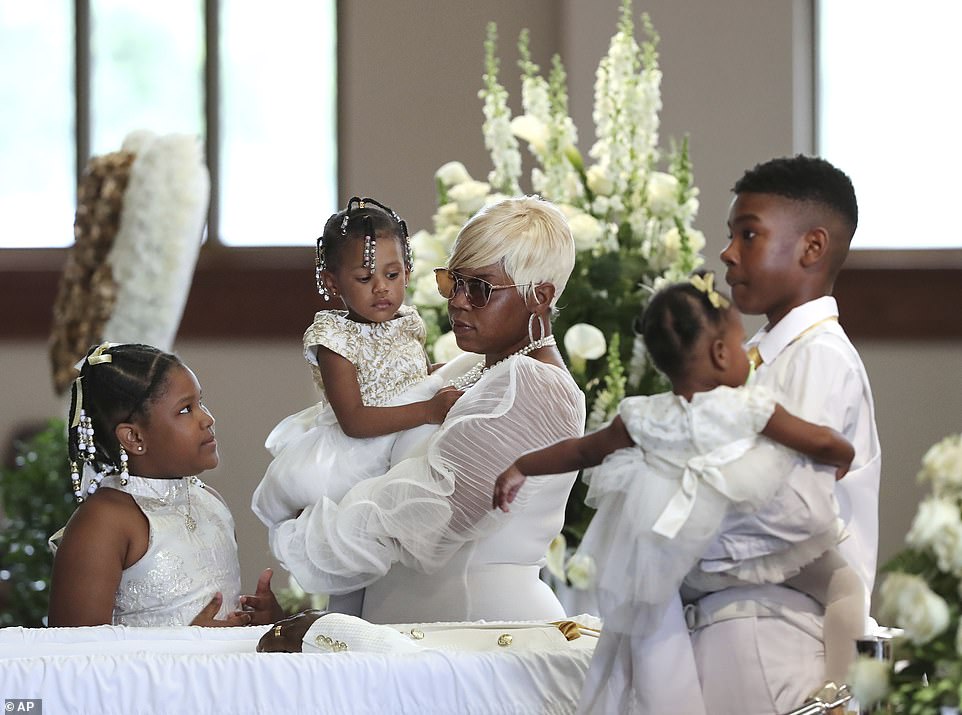 Brooks’ widow, Tomika Miller, was flanked by their two older children as she held their two-year-old daughter Memory during the family processional at his funeral 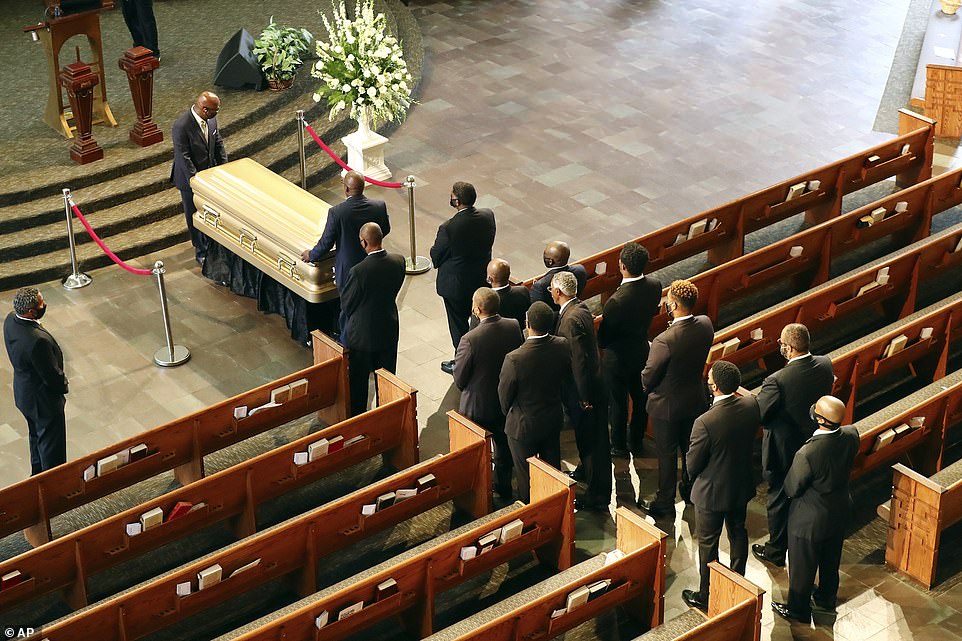 The body of Rayshard Brooks arrived in a gold-colored casket for his funeral at Ebenezer Baptist Church, Tuesday, June 23, 2020, in Atlanta 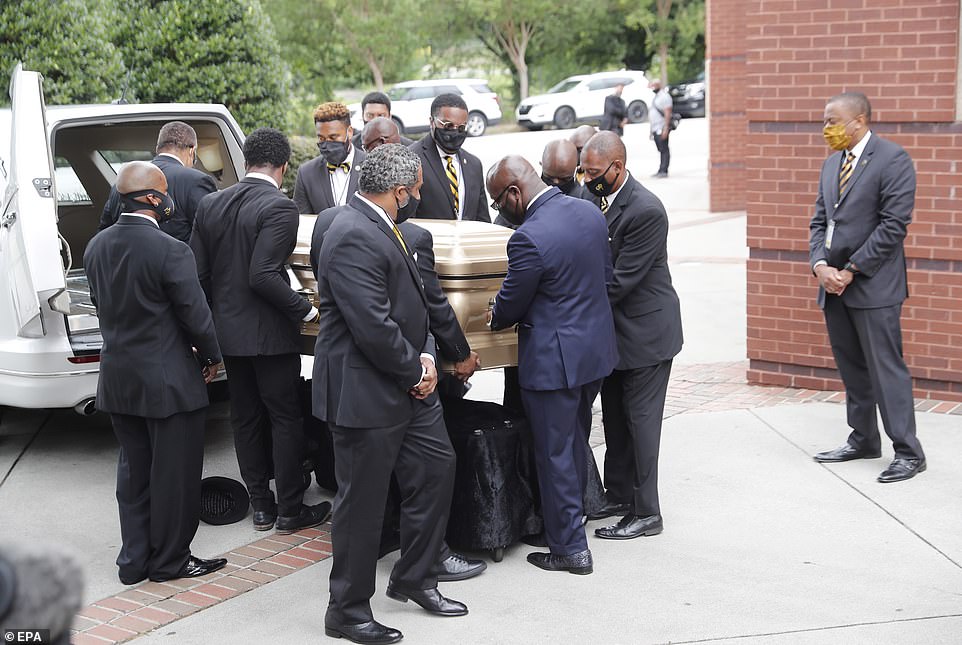 Brooks, 27, died on June 12 after he was shot dead by a white Atlanta police officer during a confrontation outside a Wendy’s drive-thru 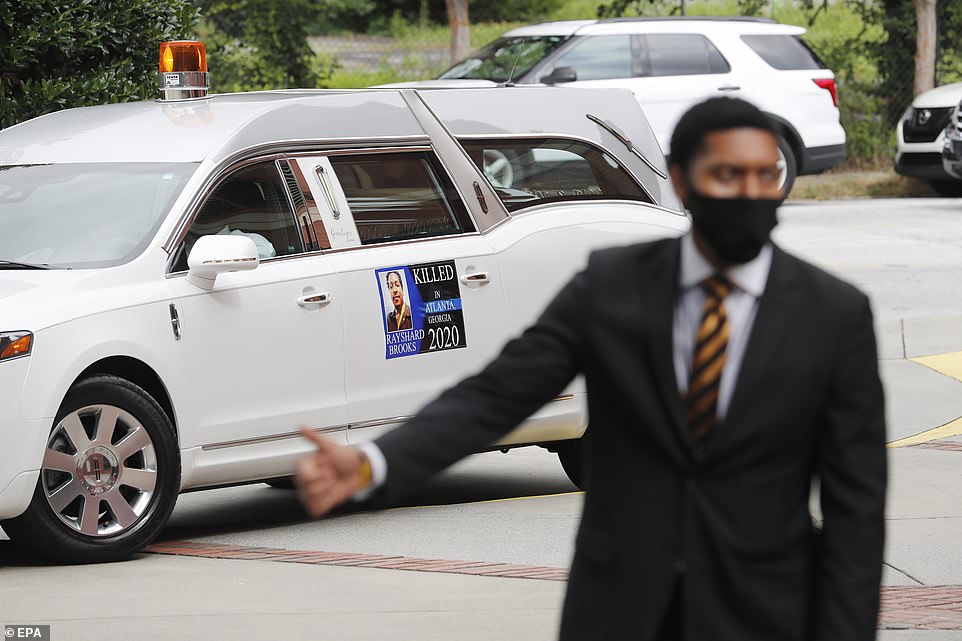 Brooks’ casket arrived at the church Tuesday afternoon in a white hearse adorned with his photos and the words ‘Killed in Atlanta, Georgia 2020’ 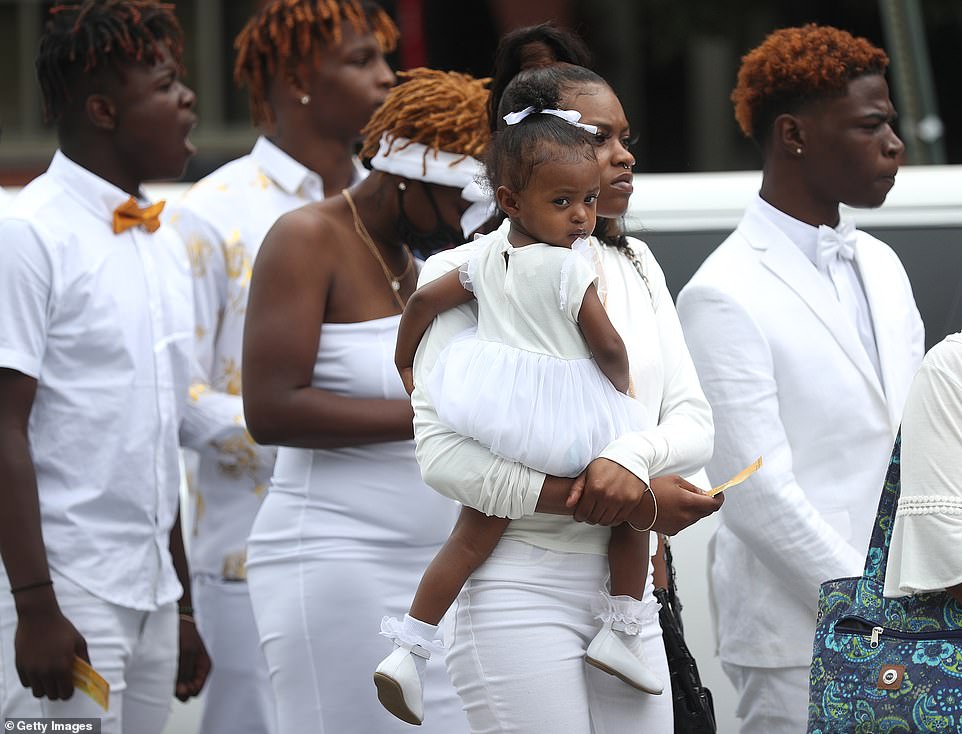 Scores of  mourners, many dressed in all white or in Black Lives Matters t-shirts, filed into the historic church on Tuesday

She noted ruefully that the killing took place in Atlanta, the ‘black mecca’ and ‘the city that is supposed to be ‘too busy to hate.’

But in a powerful echo of her father’s ‘I Have a Dream’ speech, she declared: ‘Rayshard Brooks’ death will not be in vain because justice will roll down like waters and righteousness like a mighty stream.’

‘Although I did not have a chance to meet Rayshard, I am here to stand with you in what feels like an all-too-familiar moment. Having a father killed when I was only five years of age, my heart deeply grieves for [his daughters] Dream, Memory, Blessing and [stepson] Mekai,’ she added.

‘I know the pain of growing up without a father and the ongoing attention around his tragic loss. I am and will continue to pray for each of you.

‘This did not have to happen to Rayshard,’ she said. ‘The officers should have gone home that night without blood on their hands. This is the great tragedy in our nation that must cease.’

During his remarks, Rev Warnock called Brooks the ‘latest high-profile casualty in the struggle for justice and a battle for the soul of America.’

‘This is about him, but it is so much bigger than him,’ he said.

Warnock recited a long list of names of Black people who died at the hands of police in recent years, including Eric Garner, Michael Brown, Philando Castile and George Floyd, lamenting: ‘Sadly we’ve gotten too much practice at this.’

Brooks’ gold-colored casket arrived earlier this afternoon in a black and white hearse attached with his photo and a poster reading, ‘killed in Atlanta Georgia 2020.’

Dressed in all white, Brooks’s widow, Tomika Miller, was flanked by the couple’s two older children while she held her two-year-old daughter, Memory, during the procession. 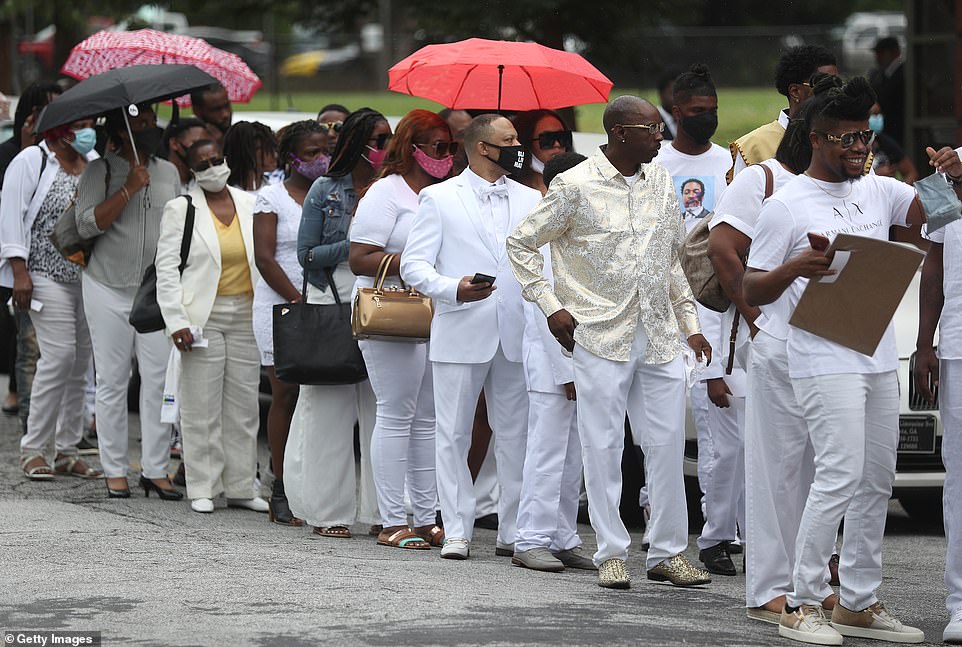 Following a funeral procession carrying Brooks’ body, about 200 family members and friends gathered at Ebenezer Baptist Church to pay their final respects at the invitation-only ceremony 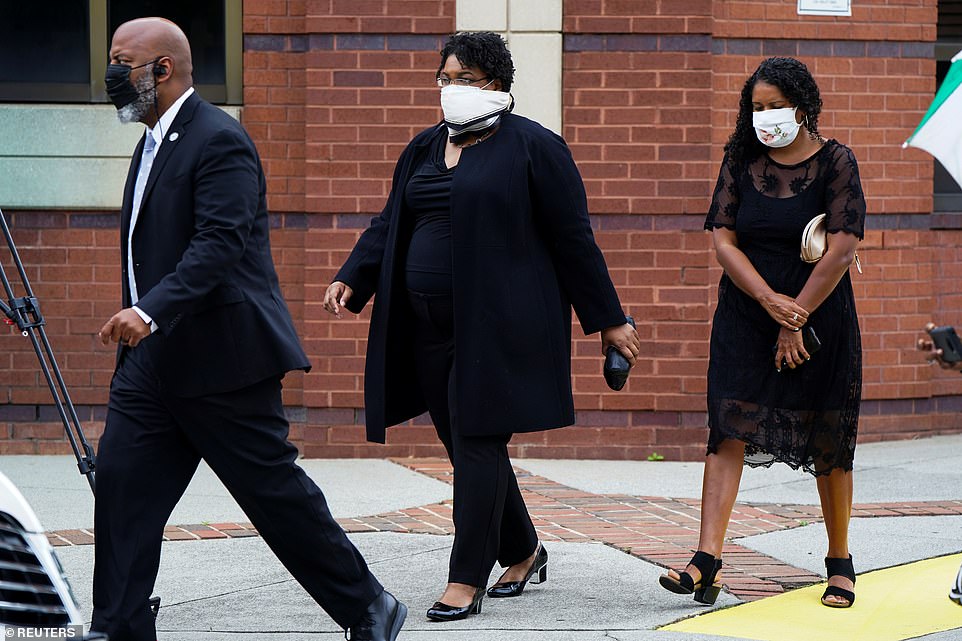 Among those arriving was Stacey Abrams, the former state lawmaker who has been mentioned as a potential running mate for Democratic presidential candidate Joe Biden 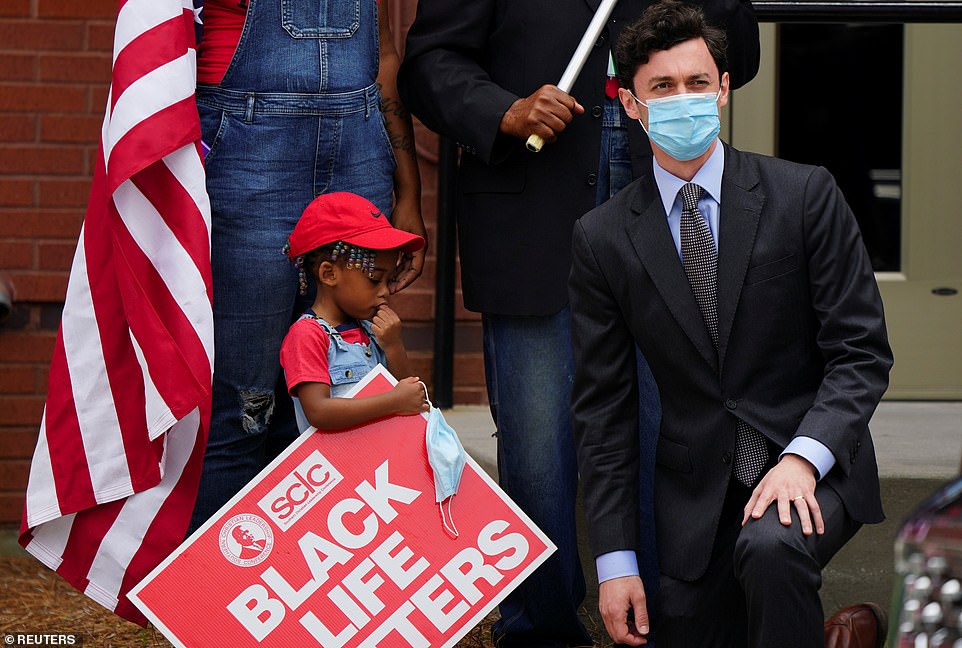 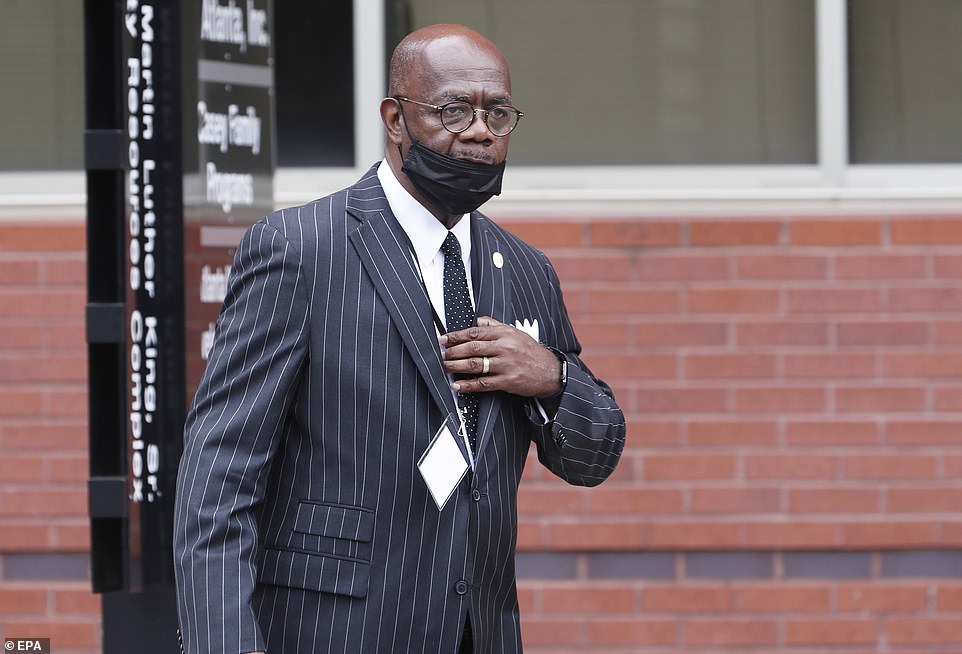 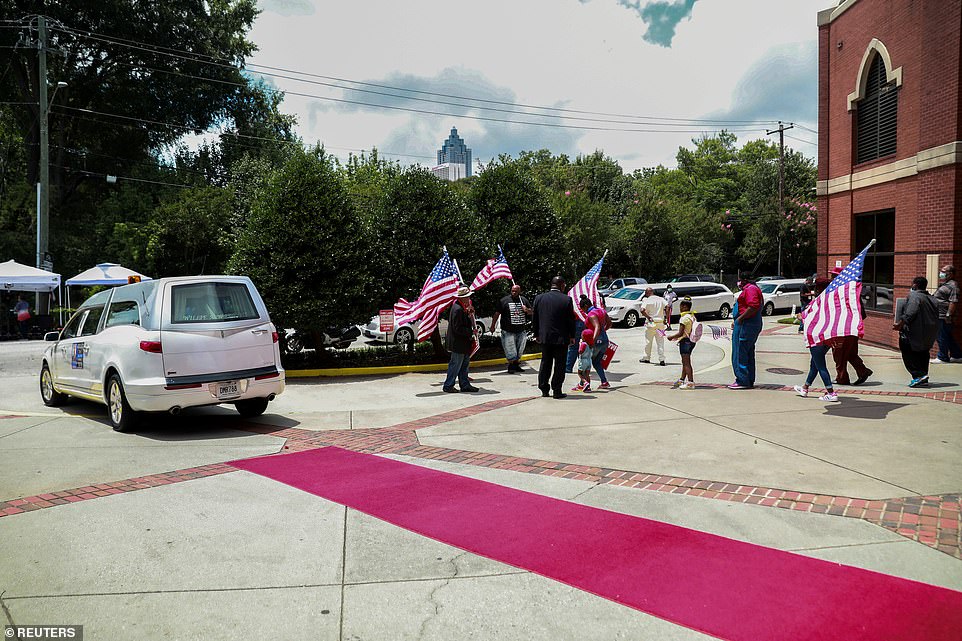 People hold U.S flags outside Ebenezer Baptist Church while funeral is in progress for Rayshard Brooks 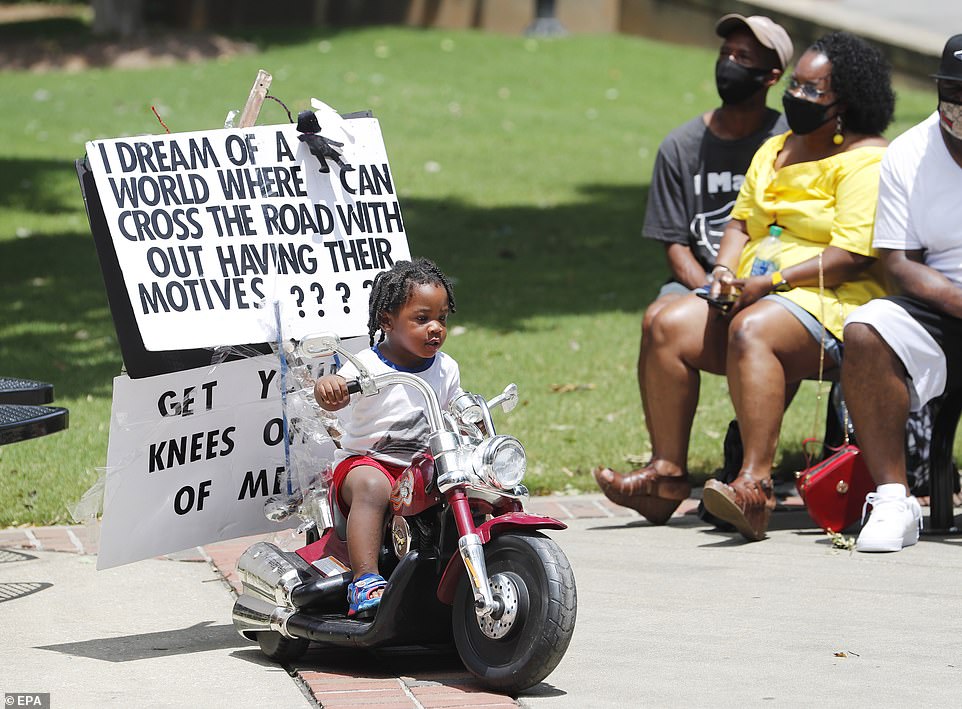 Crowds gathered outside the Atlanta church on Tuesday to watch the service on a jumbotron. Pictured: A little boy rides his tricycle with placards calling for justice

Among those at the service were Stacey Abrams, the former state lawmaker who has been mentioned as a potential running mate for Democratic presidential candidate Joe Biden; and Jon Ossoff, a young Georgia media executive who broke fundraising records during an unsuccessful 2017 run for Congress, and Fulton County District Attorney Paul Howard.

The service also drew a number of celebrities including Atlanta native and rapper T.I. and wife Tiny, who were recognized by pastor Warnock during the service as well as Real Housewives of Atlanta star Phaedra Parks.

Some mourners wore T-shirts with Brooks’ picture and nearly everyone wore masks against the coronavirus.

Actor and filmmaker Tyler Perry offered financial help for the service, according to a statement released by the family.

Brooks, 27, was shot twice in the back June 12 by Officer Garrett Rolfe after a struggle that erupted when police tried to handcuff him for being intoxicated behind the wheel of his car at a Wendy’s drive-thru.

Video showed Brooks snatching a police Taser and firing it at Rolfe while running away.

Lawyers for both men said their clients’ actions were justified. 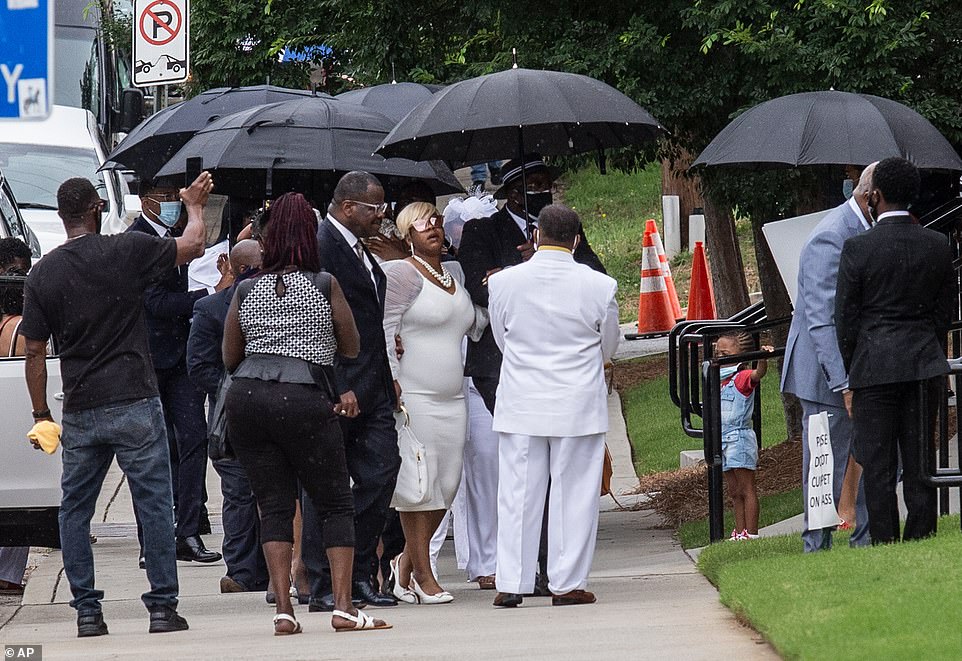 The family of Rayshard Brooks arrived earlier this afternoon, the majority of them dressed in white or in BLM shirts 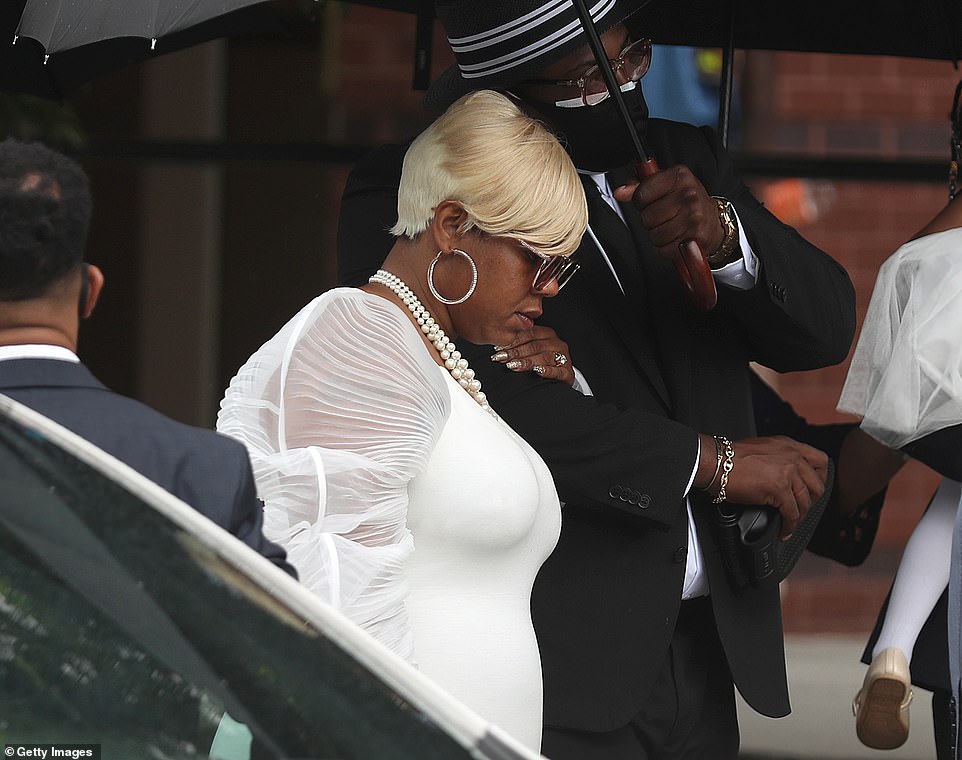 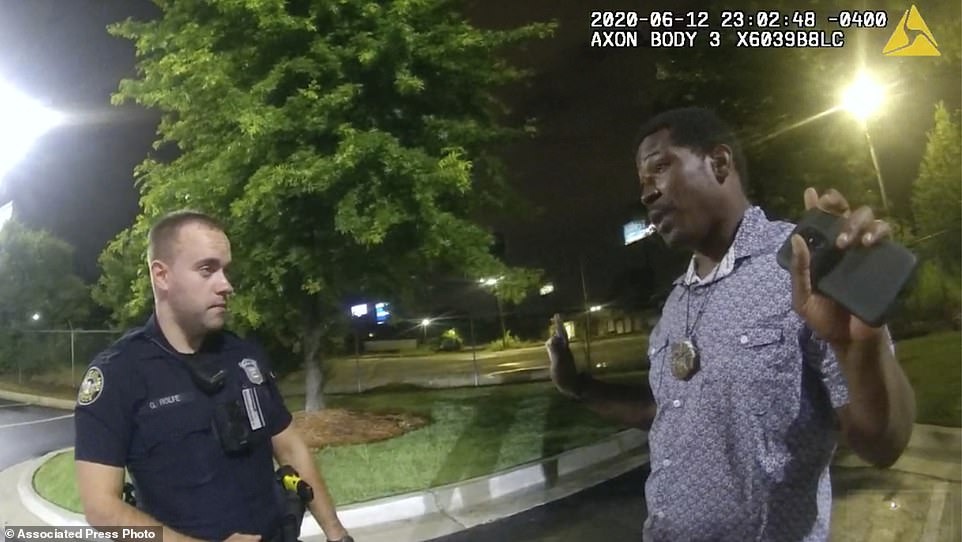 In this June 12, 2020 file photo from a screen grab taken from body camera video provided by the Atlanta Police Department Rayshard Brooks speaks with Officer Garrett Rolfe in the parking lot of a Wendy’s restaurant, in Atlanta

The killing unfolded amid protests and scattered violence set off around the country by the case of George Floyd, the Black man who was pronounced dead May 25 after a white Minneapolis put his knee on Floyd’s neck for nearly eight minutes.

Atlanta’s police chief stepped down less than 24 hours after Brooks’ death, and the Wendy’s was burned by protesters.

While Brooks was not a member of Ebenezer Baptist, the church where King preached is a ‘sanctuary for those who suffer,’ Warnock said in a statement announcing the funeral plans. 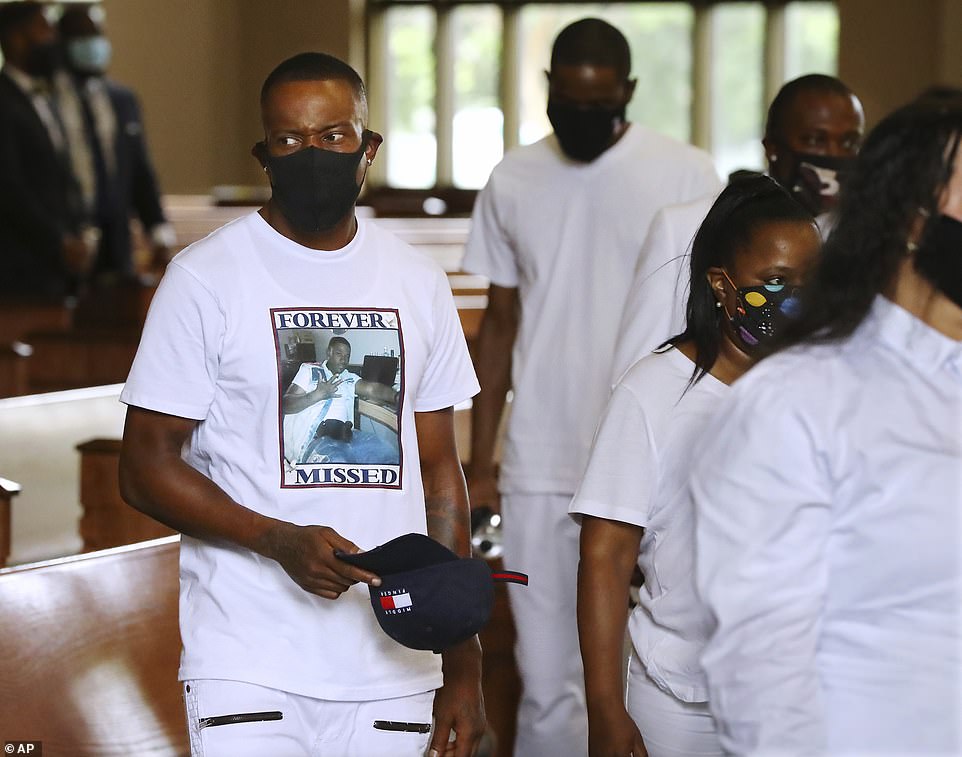 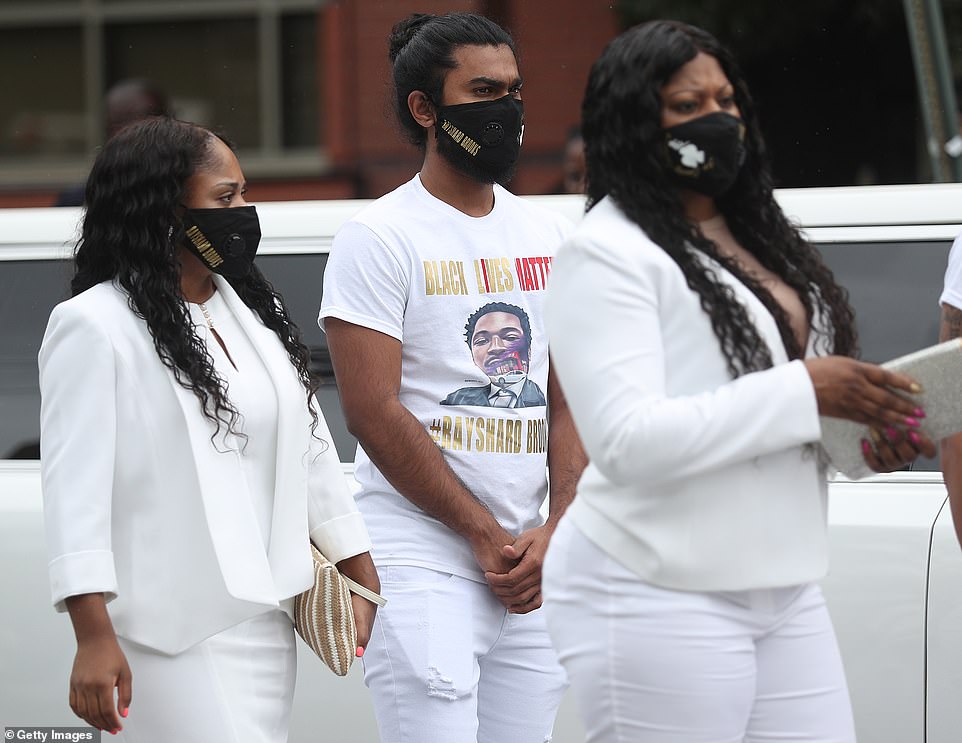 An afternoon bail hearing for Rolfe that would have conflicted with the funeral was canceled by a judge. Under the law, crime victims and their families are entitled to be heard at such proceedings.

Meanwhile, a new poll that finds nearly all Americans favor at least some change to the nation´s criminal justice system, and they overwhelmingly want to see clear standards on when police officers may use force and consequences for those who cross the line.