Colorado rightly has a reputation as a skiing mecca – but the state has plenty on offer outside the realms of winter sports.

For starters, you can follow in the footsteps, as I did, of former presidents George W Bush and Barack Obama, with a stay at The Broadmoor in Colorado Springs, Colorado’s second-biggest city after Denver.

The 784-room hotel, known as ‘The Grand Dame of the Rockies’, opened in 1918 and was meant to capture the luxury of Asian and European designs seen by owners Spencer and Julie Penrose in their travels.

James Gordon checked into The Broadmoor (above) in Colorado Springs, Colorado’s second-biggest city after Denver 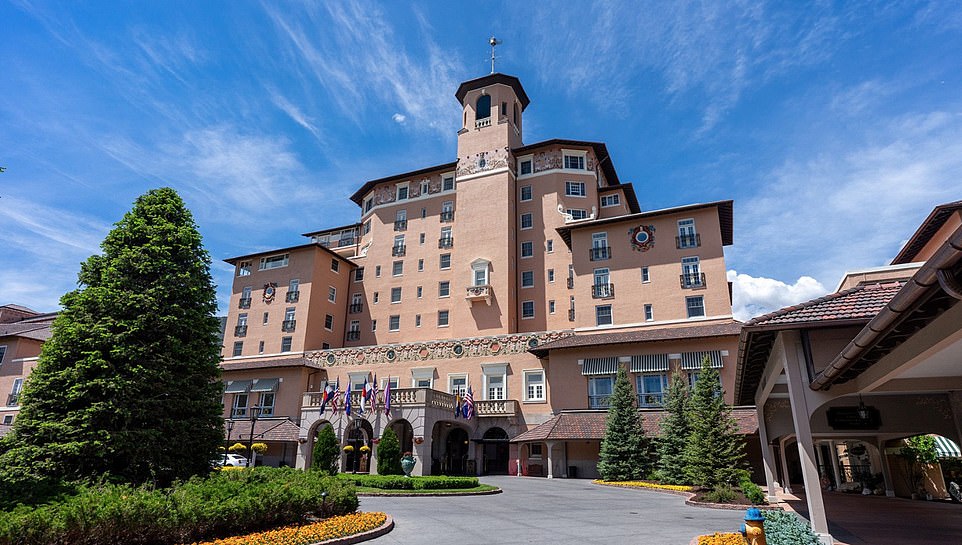 The 784-room Broadmoor, known as ‘The Grand Dame of the Rockies’, opened in 1918. It has Mediterranean-style towers and is set around a lake

The Penroses’ goal was to create the finest hotel in the country and they spared no expense, hiring top architects and landscapers.

It ‘feels’ very European, with its signature pink buildings complete with Mediterranean-style towers, all set around a lake at the foot of the Rocky Mountains.

The public areas of the hotel are lavishly decorated with beautifully painted walls and ceilings, marble floors, spiral staircases, and wood-panelled doors.

Our room, wrapped in vintage decor, was a suite complete with a living room and bedroom overlooking the property’s lakefront, which made for a relaxing view. 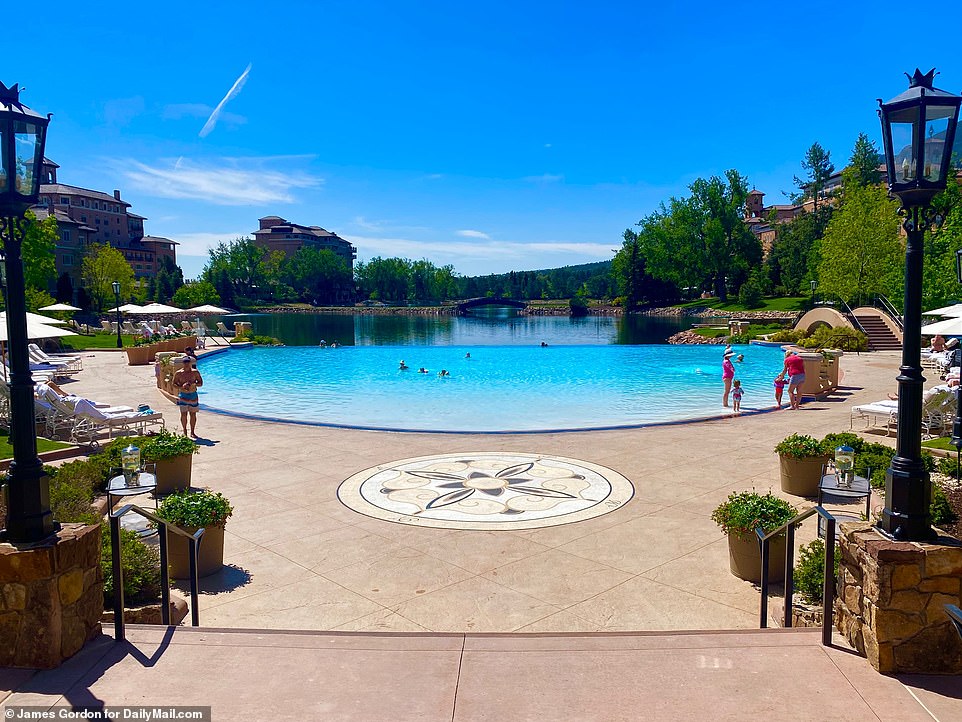 The Broadmoor boasts an enormous – and hugely inviting – turquoise infinity pool (above, with the lake just beyond) 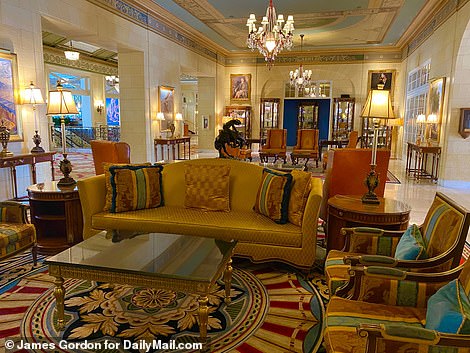 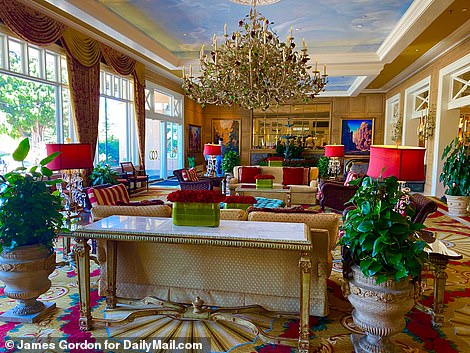 There are plenty of comfy places to rest inside The Broadmoor with beautiful furnishings throughout. ‘The public areas of the hotel are lavishly decorated,’ says James 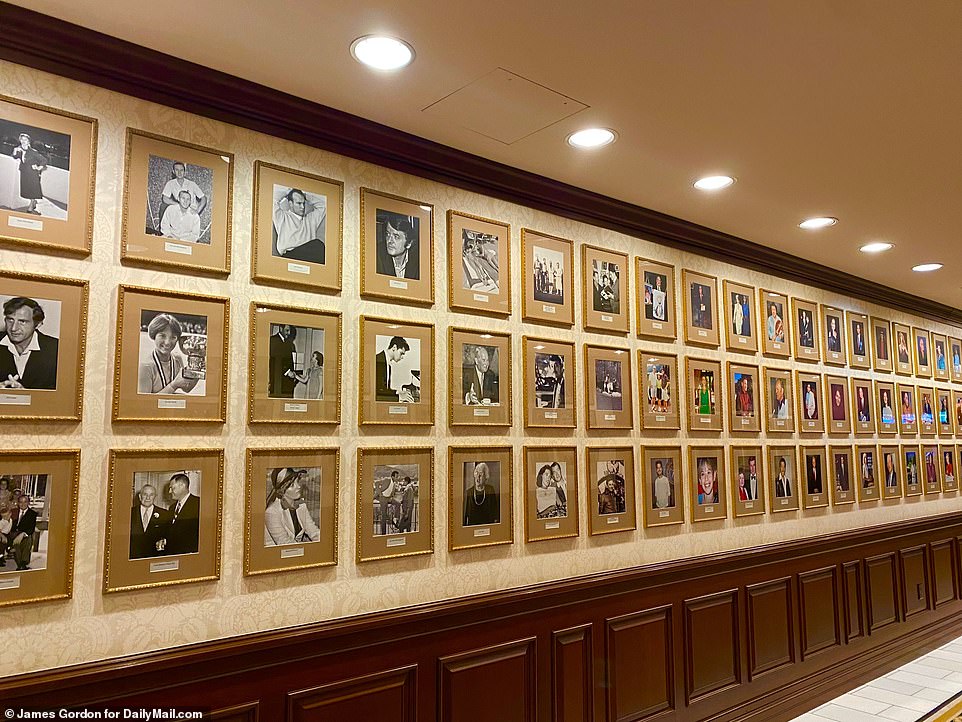 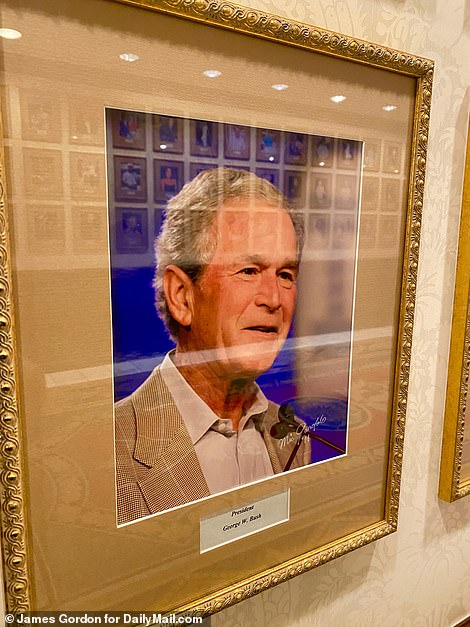 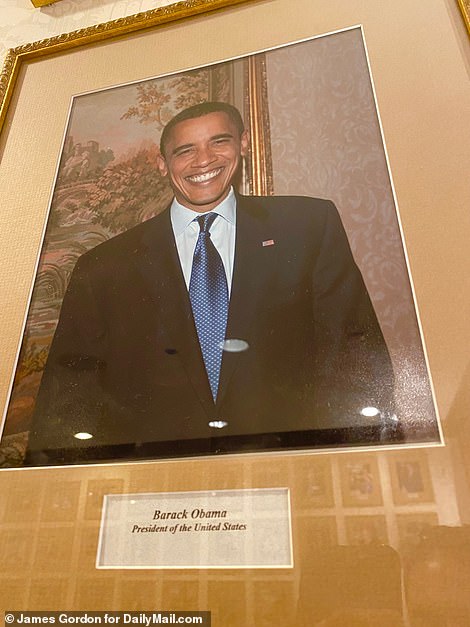 The hotel also boasts an enormous – and hugely inviting – turquoise infinity pool and 20 restaurants, cafes and lounges to choose from. It’s impossible to go hungry.

One is Cheyenne Mountain Zoo, which sits 6,714ft up on the mountainside directly behind the hotel.

It is the only mountainside zoo in the U.S and one of the best I’ve ever visited.

There are more than 750 animals housed amid mossy boulders and Ponderosa pines, giving the area a natural feel with a huge variety of animals on display, including elephants, meerkats, lions and tigers.

There is also a superb Rocky Mountain twist to the attraction with wolves, mountain lions, grizzly bears and even moose prowling the grounds. 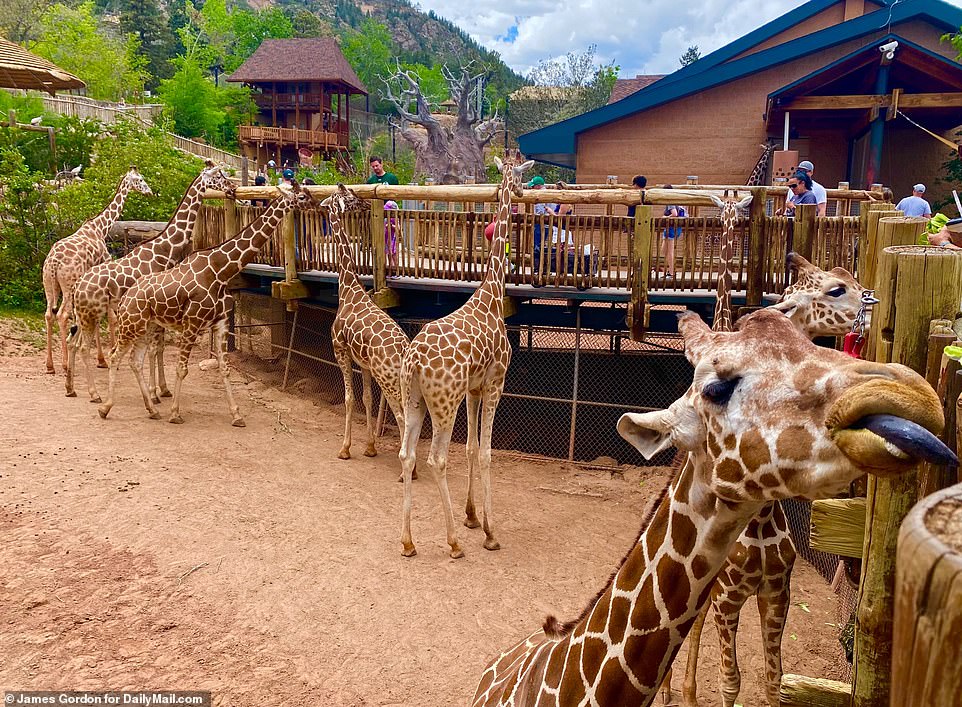 James and his family enjoyed feeding the giraffes at Cheyenne Mountain Zoo (above). He writes: ‘We must have handed out what would have made four or five decent Caesar salads, all quickly consumed by a dozen or so hungry giraffes’

By far the most memorable moments came from the feeding of giraffes in the African Rift Valley via a special 12ft-high platform.

Visitors can buy chunks of lettuce leaves that the animals then devour.

We must have handed out what would have made four or five decent Caesar salads, all quickly consumed by a dozen or so hungry giraffes.

Nearby is the Seven Falls, a tourist destination since the 1800s. Just as its name implies, it consists of seven waterfalls. 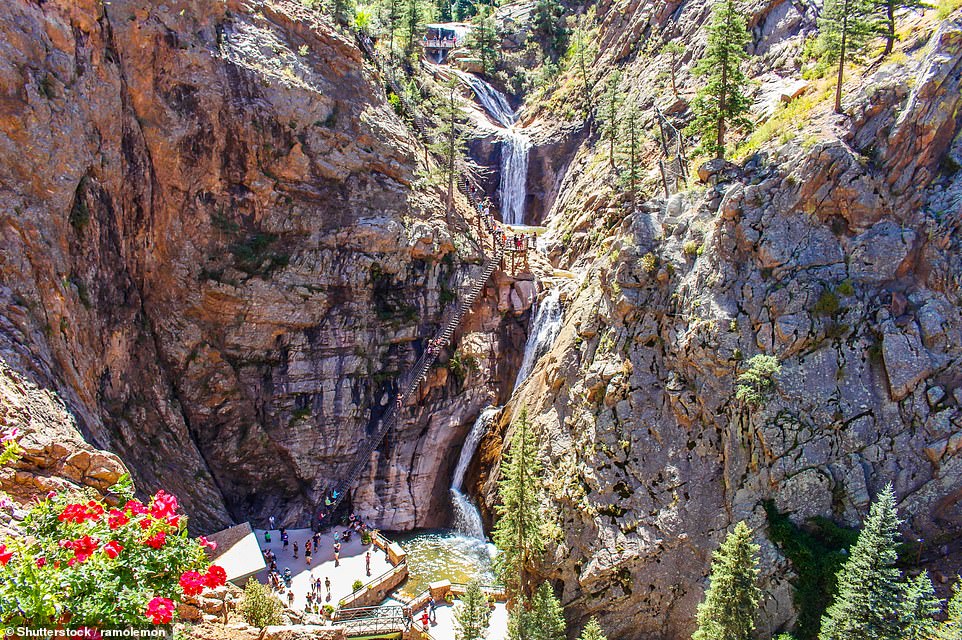 They cascade 181 feet down a cliff face at the rear of a narrow red-rock canyon lined with fir trees into a tiny emerald pool.

The setting is stunning.

Those with enough stamina can climb 224 steps that sit alongside the waterfalls. Incredible views of the 1,250ft canyon and the falls can be enjoyed on the way up.

The next day, we made for one of the most popular sites of Colorado Springs, The Garden of The Gods. The natural landmark features stunning red geological formations, including the amazing ‘Balanced Rock’. 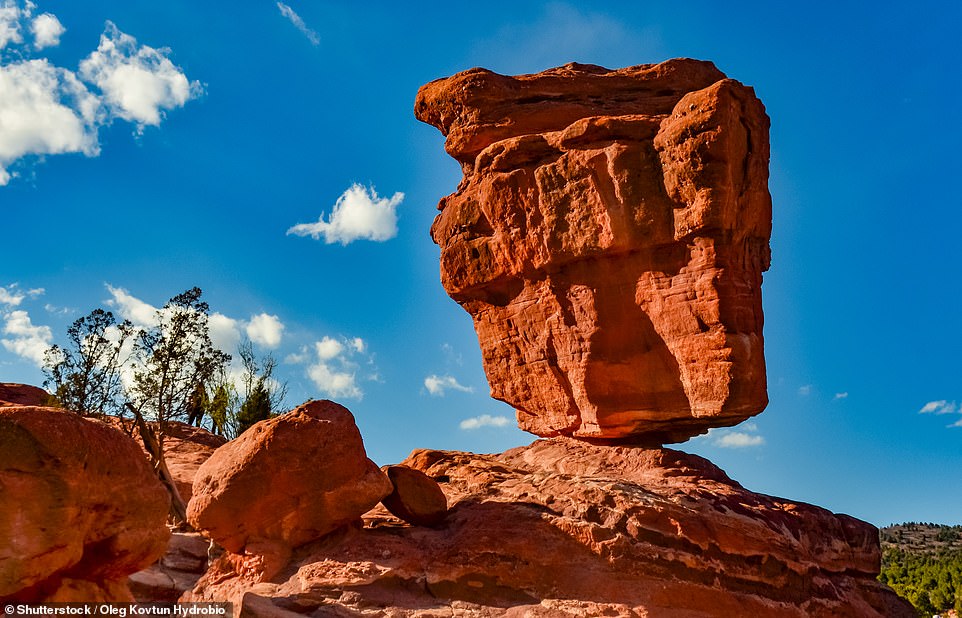 One of the most popular Colorado Springs attractions is The Garden of The Gods (above), which features unique rock formations 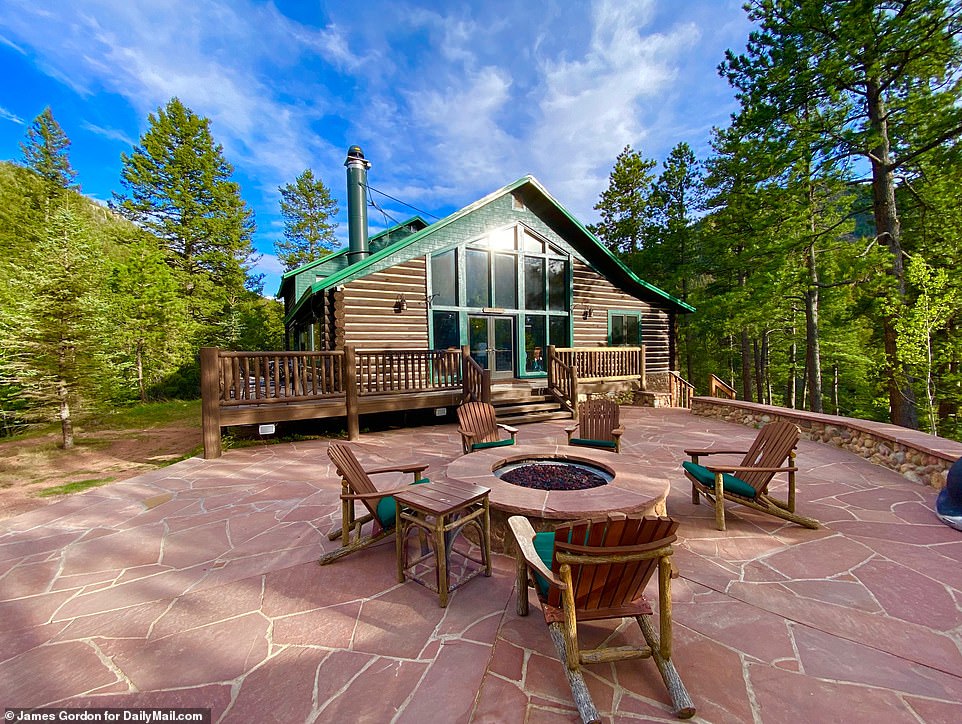 The Broadmoor offers a ranch experience set in an ‘idyllic spot’ a short drive away. Above is the ‘beautifully furnished log cabin’ that James and his family stayed in

We also had an amazing ‘ranch experience’ at The Broadmoor’s Emerald Valley Ranch, set in an idyllic spot about a 45-minute drive from the hotel.

We stayed in one of 13 beautifully furnished log cabins, which came with its own kitchen and fire pit.

There was no mobile phone service, the Wi-Fi was spotty, and there was no TV. We were only ten miles from Colorado Springs, but it really is a digital wilderness. Heaven!

While there, we were tutored in archery and I had a short horse ride around the ranch perimeter with my four-year-old son, who appeared to be a natural in the saddle.

The next stop on our Colorado odyssey was Aspen, where we checked into the swish W Aspen. When it opened in 2019, it was the city’s first new luxury hotel in 25 years. James’s first activity in Aspen was to head up to Red Mountain, from where he was treated to an amazing view of the ski slopes above the town (above)

It was built as a Swiss-style ski chalet with sloping roofs and is nestled right at the foot of Aspen Mountain, known locally as Ajax, with the ski lifts and gondolas – open in the summer – fully visible the moment you step outside the hotel.

The property is beautifully furnished with wooden ceilings and wood-panelled walls throughout. There’s also plenty of local artwork showcasing Americana and the vibrancy of the state with pictures of mountain bears, meadows and snow-capped mountains.

It also boasts a terrific rooftop pool heated to a perfect 32C/90F and which offers incredible mountain views. 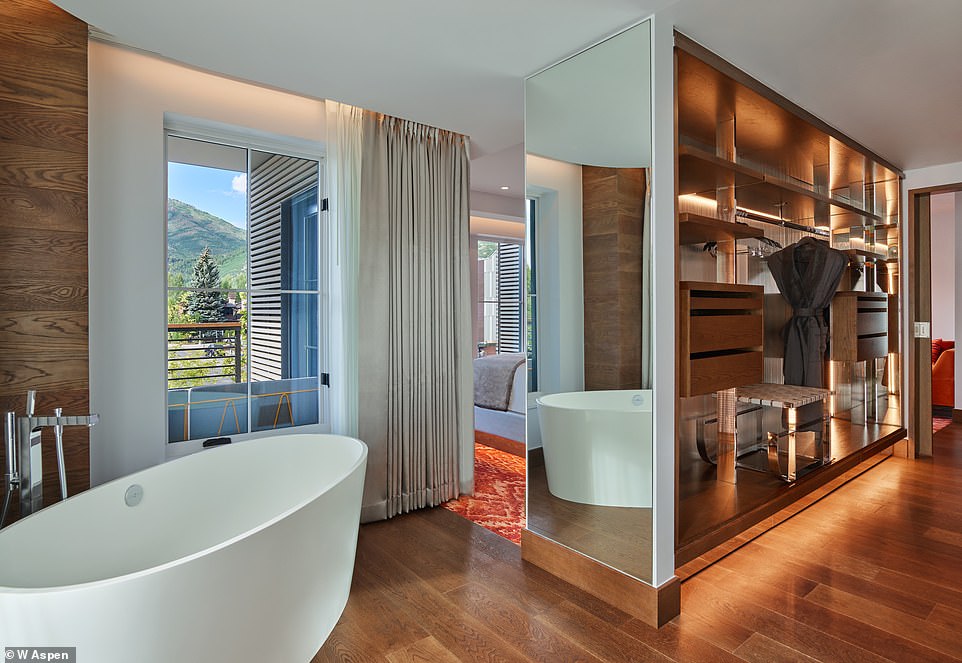 When W Aspen opened in 2019, it was the city’s first new luxury hotel in 25 years 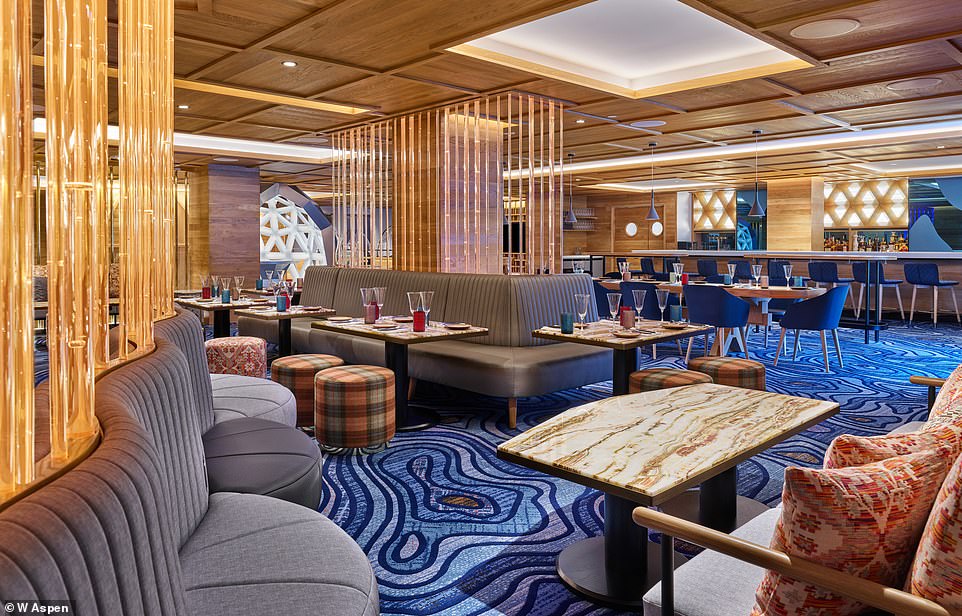 James says of W Aspen: ‘The property is beautifully furnished with wooden ceilings and wood-panelled walls throughout’ 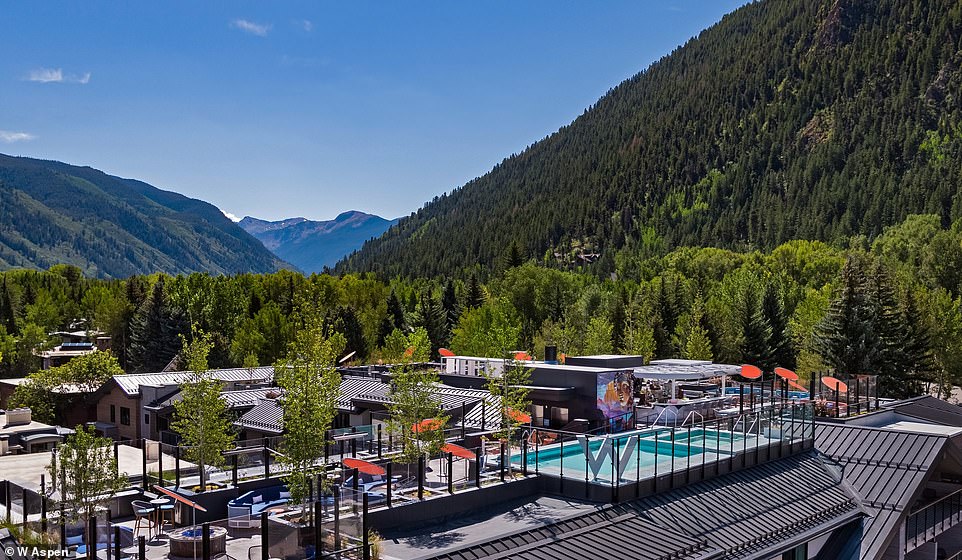 W Aspen is perfectly positioned at the foot of Aspen Mountain, locally known as Ajax

There are very few weeks in the year when Aspen is quiet. In winter, the population doubles to 14,000, but in the summer it triples to 21,000, when the city’s music, food and art festivals begin.

It was suggested my first activity should be to get a good view of the town by heading up to Red Mountain, half a mile away from the edge of town, yet offering a bird’s eye view of the streets below and the towering 11,000ft Aspen Mountain behind it.

We also took a trip down one of the many country lanes to reach the Maroon Bells, said to be one of the most photographed mountains in North America. 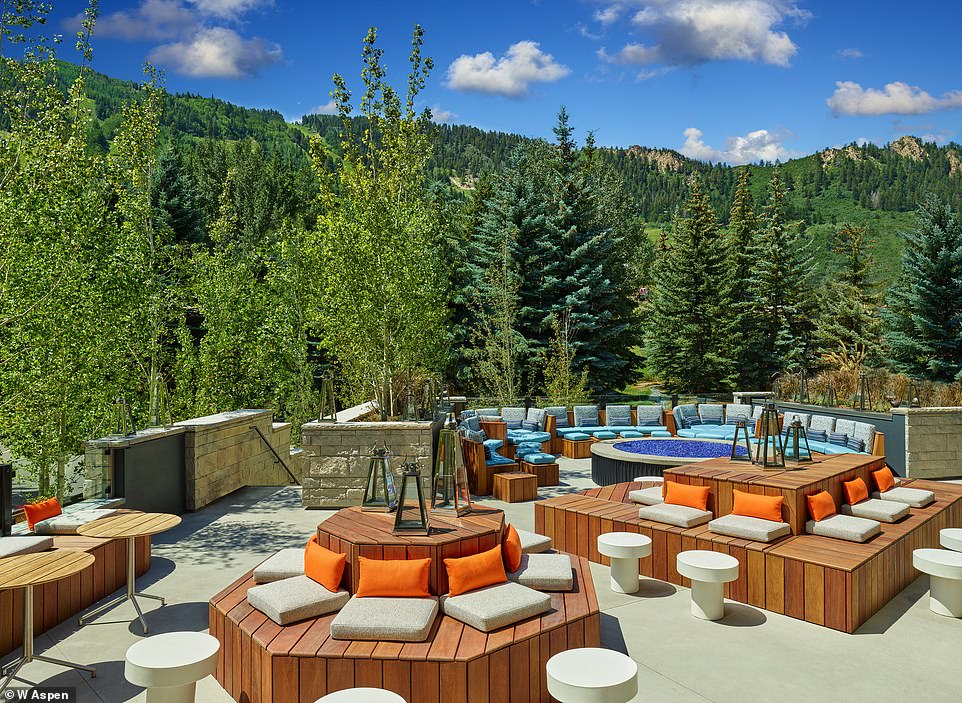 One of the inviting outdoor seating areas at W Aspen, which offers incredible mountain views 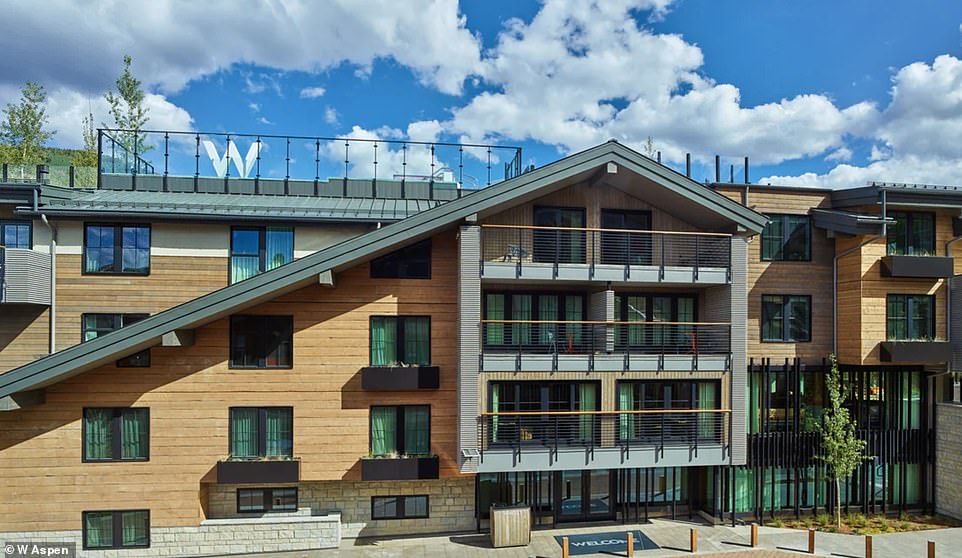 America, or the Alps? W Aspen was built in a Swiss ski chalet style, with sloping roofs

It consists of two peaks and a beautiful lake below. Wildflower meadows complete the picture.

Sitting 11 miles outside Aspen, the sight is a must-see for anyone coming to the area, no matter the time of year.

Colorado is definitely one of the most beautiful states that I have ever visited.

Travellers are greeted by a new landscape with each and every turn.

On the three-hour drive from Denver to Aspen we came across mountains, flourishing country meadows, forests and even a canyon through which the I-70 highway was constructed in 1992. 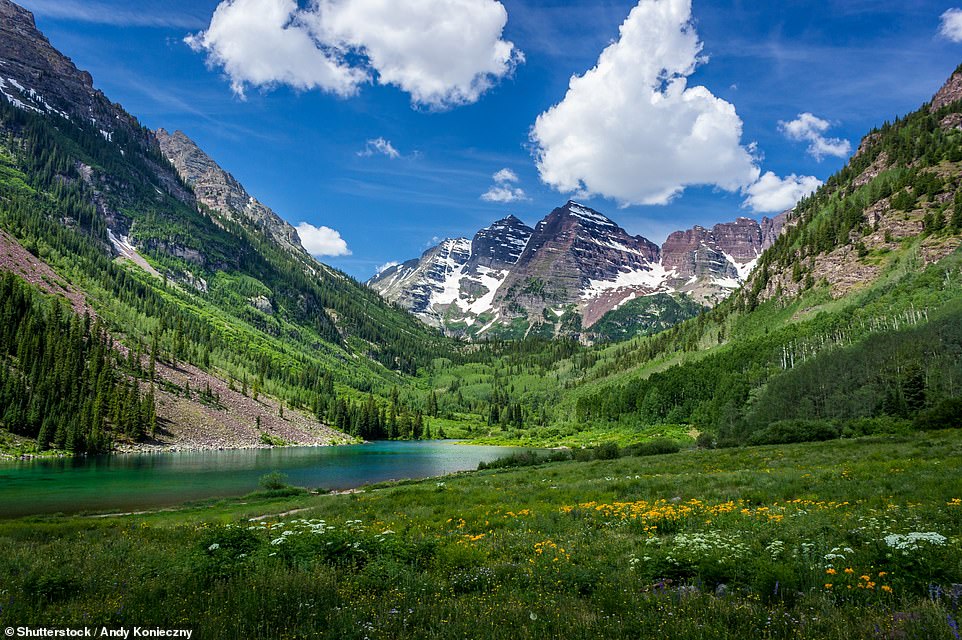 Maroon Bells (above), said to be one of the most photographed mountains in North America. It consists of two peaks and a beautiful lake below. Wildflower meadows complete the picture. This scene can be found around 11 miles outside Aspen and is ‘a must-see for anyone coming to the area, no matter the time of year’ 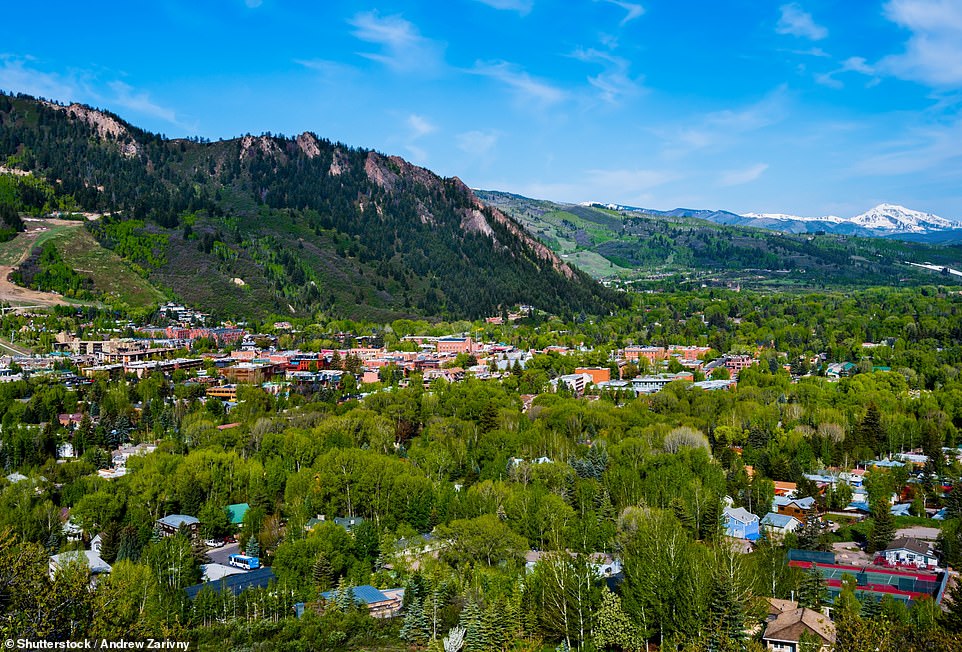 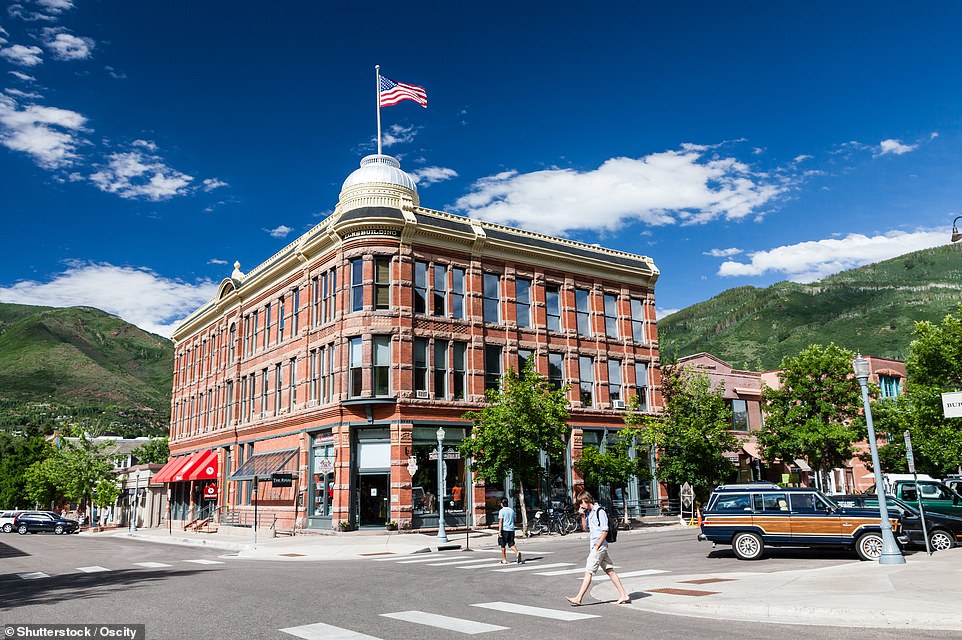 Aspen’s music, food and art festivals kick off in the summer months. Above is a view north along Galena Street 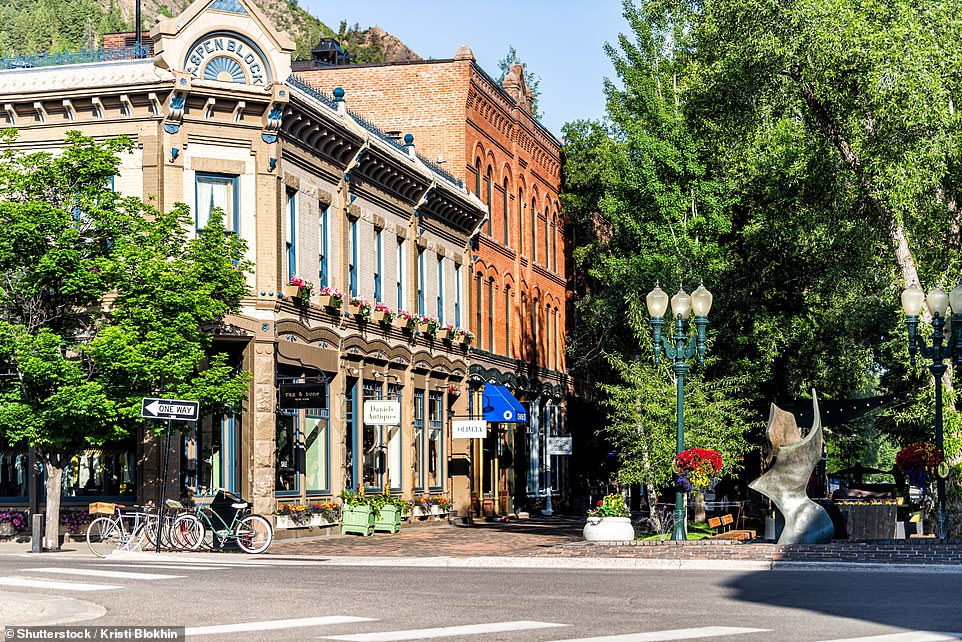 Aspen has plenty of greenery and vintage architecture. It’s a three-hour drive from Denver to the city

In winter there is a similar sense of wonderment to be held, with the entire landscape bathed in shimmering whiteness.

But for me, the views of a greener Colorado were picture-postcard perfect.

A trip I will not soon forget.