A rare timewarp Mk1 Mini sold at a UK auction at the weekend for a staggering £52,875, having been kept by the last owner for 57 years and not driven for over three decades.

The low-mileage 1965 Cooper S ‘1071’, finished in a rare Almond Green paint, went to the block having spent the last 34 years in a garden shed in the midlands.

In the year it was produced, the Mini would have set buyers back £778. When the hammer dropped on Saturday, the winning bid was 68 times that figure.

A big bid for a little car: This low-mileage 1965 Mini Cooper S – which has been stored in a garden shed on the outskirts of Kidderminster for over 30 years – sold at auction this weekend for a whopping £52,875 – that’s 68 times what it cost new almost six decades ago

Classic Car Auctions had described the low-mileage Mini as a ‘sleeping beauty’ before it went to the block on 24 September in Warwickshire.

That’s because earlier this year it had been unearthed from a 34-year slumber in the vendor’s garden shed on the outskirts of Kidderminster.

Having not turned a wheel since 1988, it has clocked an indicated 39,144 miles from new, making this one of the best-preserved examples of a British motoring legend currently in existence.

The 1071cc MK1 Morris Cooper S was the performance version of the Mini produced by BMC (British Motor Corporation) that famously won the Monte Carlo Rally back in 1964 with Paddy Hopkirk – who died at the age of 89 earlier this year  – at the wheel.

Only around 4,000 examples were produced with this engine between 1963 and its famous rally-winning year, and not many survive today.

Like all versions of the original Mini Cooper S, a 1071cc is a highly desirable car. However, this version is pretty exceptional given that it has the single fuel tank, which was standard at the time until dual tanks were fitted to all Cooper S models from 1966 onwards.

This one’s rare green paint job – contrasted with a white roof – as well as the low mileage and fact it is a UK-supplied, right-hand drive car saw competitive bidding breakout, with the new owner eventually paying more than £21,000 over the top estimate of £32,000.

Back in 1965, the Mini would have cost just under £800 new. Using the This is Money historical inflation calculator, that works out at £16,817 in today’s money. Saturday’s winning bid of £52,875 is three times that amount. 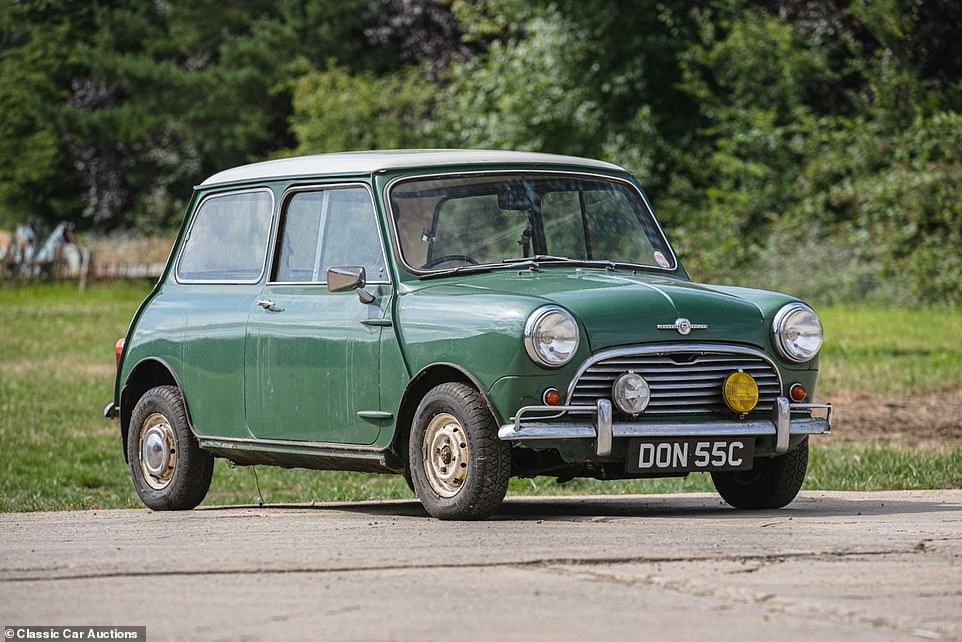 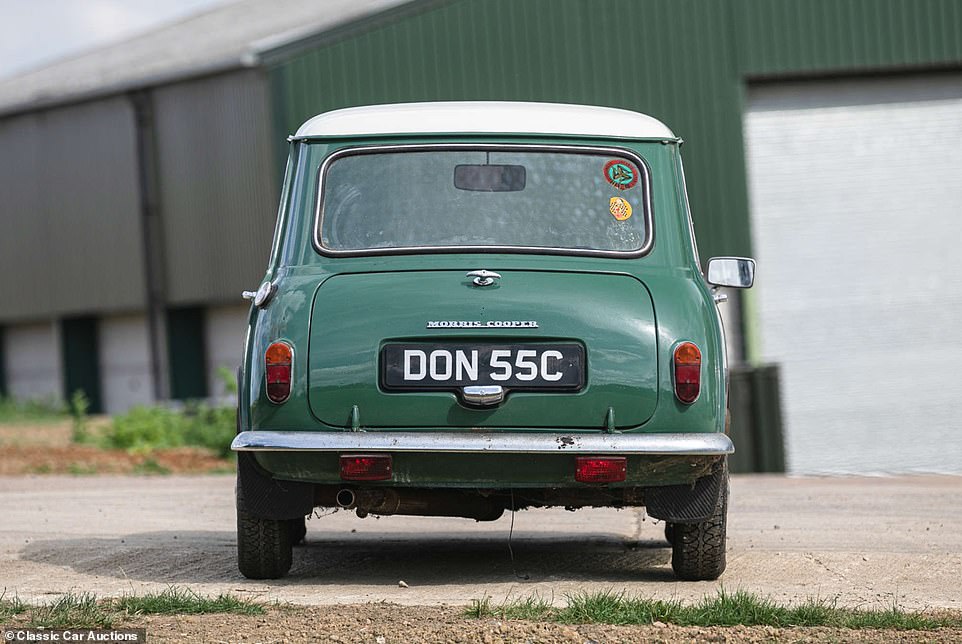 The timewarp Mini has only had one owner almost from new – and in over half a century the car has accumulated only 39,144 miles 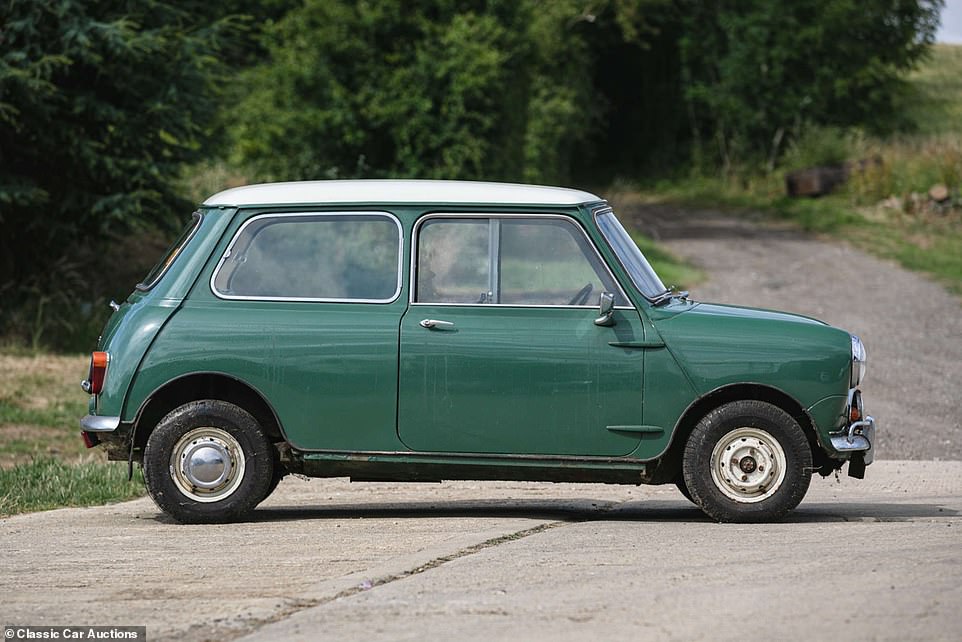 Richard Greenhalgh, who consigned the car for Classic Car Auctions ahead of the sale, said the owner had originally bought the Mini in 1965 instead of a Jaguar sports car because he wanted to ‘transport more passengers on trips’.

‘The vendor from near Kidderminster is in his 80s now,’ Richard explained ahead of the sale. ‘Of course, when he bought the Mini Cooper it was quite a car in its day.

‘He told me he could have had an E-Type Jaguar at the time but decided on the Cooper S ‘1071’ as he wanted to go on a trips with the car, with possibly two or three passengers and back then he felt the Cooper S was more practical than the E-Type.’ 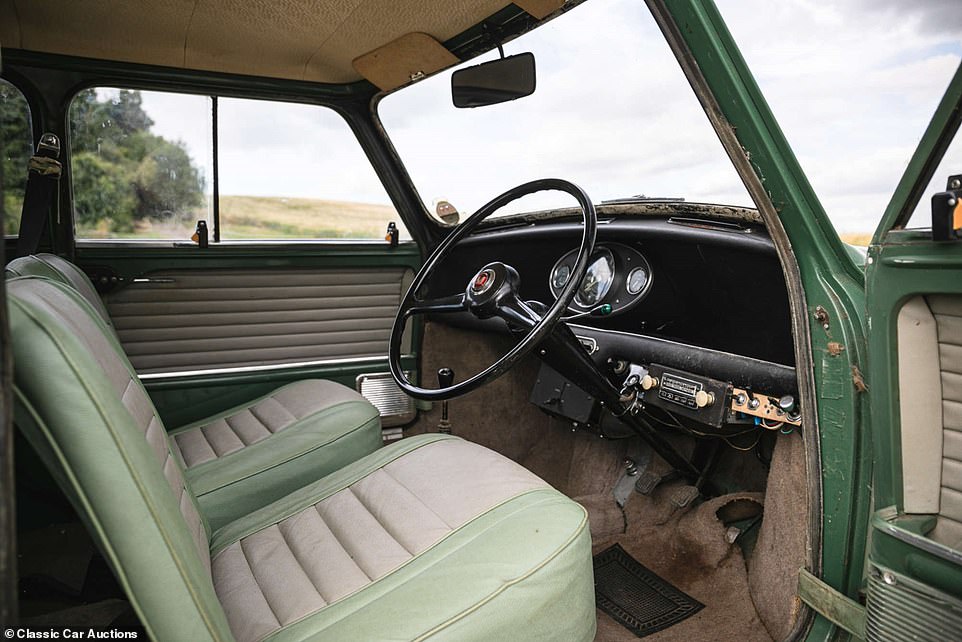 The car was sold in almost original condition, retaining its factory-fitted Dove Grey and Porcelain Green vinyl interior, which is complemented by Cumulous Grey carpets

The Mini is a British icon, and the Mk1 Cooper S is the jewel of them all, which is why they are so desirable among collectors and classic car enthusiasts 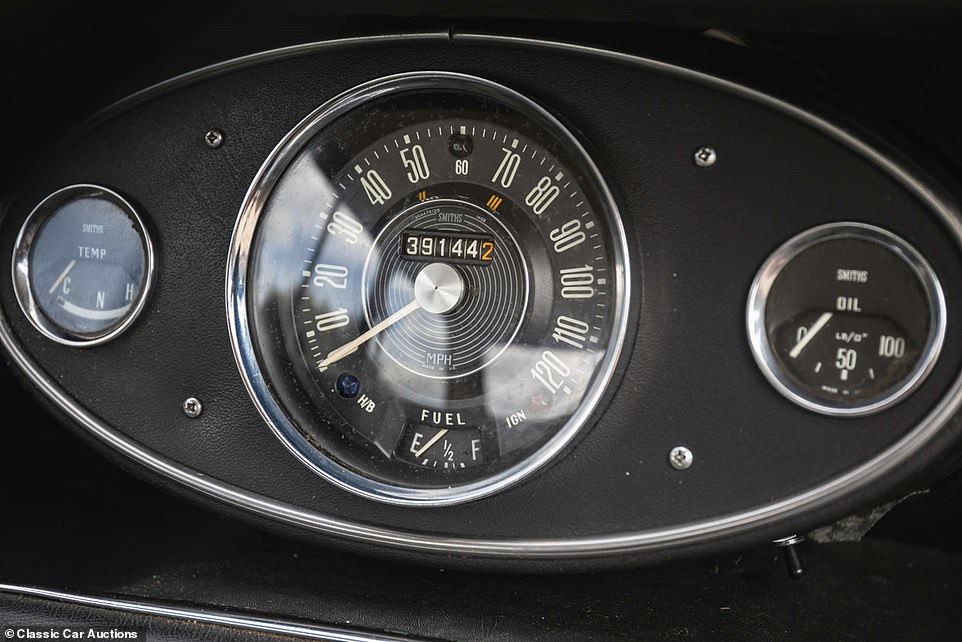 The last MoT certificate with the car was issued in October 1986 at 39,031 miles, which means it has travelled just 113 miles in the last 36 years – based on the odometer reading ahead of Saturday’s auction 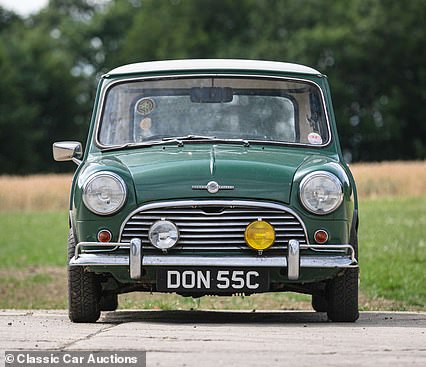 The car was sold in entirely original condition, including the factory Dove Grey and Porcelain Green vinyl interior, which is complemented by Cumulous Grey carpets.

Originally purchased by a BMC employee on a company discount scheme in 1965, it was bought by the vendor later that year.

That means it was in single ownership almost from new, stretching some 56 years.

The latest MoT certificate that accompanied the car at the sale was issued in October 1986 at 39,031 miles, which means it travelled just 113 miles in the last 36 years.

The new owner also got the original British Motor Corporation ‘Passport to Service’ book and a tax disc with an expiry date of 31 March 1988, both of which were still inside the vehicle throughout its 34 years of shed storage.

All identification numbers are genuine, correct and original, the auction house said before the sale.

The ‘DON 55C’ registration number is original too, Classic Car Auction confirms – and is likely worth a few thousand pounds on its own.

Given that it has been kept in a wooden shed for over three decades, no attempt was made to start it before the auction.

The engine will need a very close inspection before it is turned over – though the chassis did roll freely when pushed out of the shed and the car moved to a transport vehicle.

In the auction house’s pre-sale condition report, it scores a relatively poor 61 out of 135, with clear signs that it needs some TLC.

Apart from the interior, which appears in relatively good condition, the Mini’s exterior, engine and other mechanical components were given a two-out-of-five star rating throughout and even the original Cooper S 4.5J wheels will need some attention. 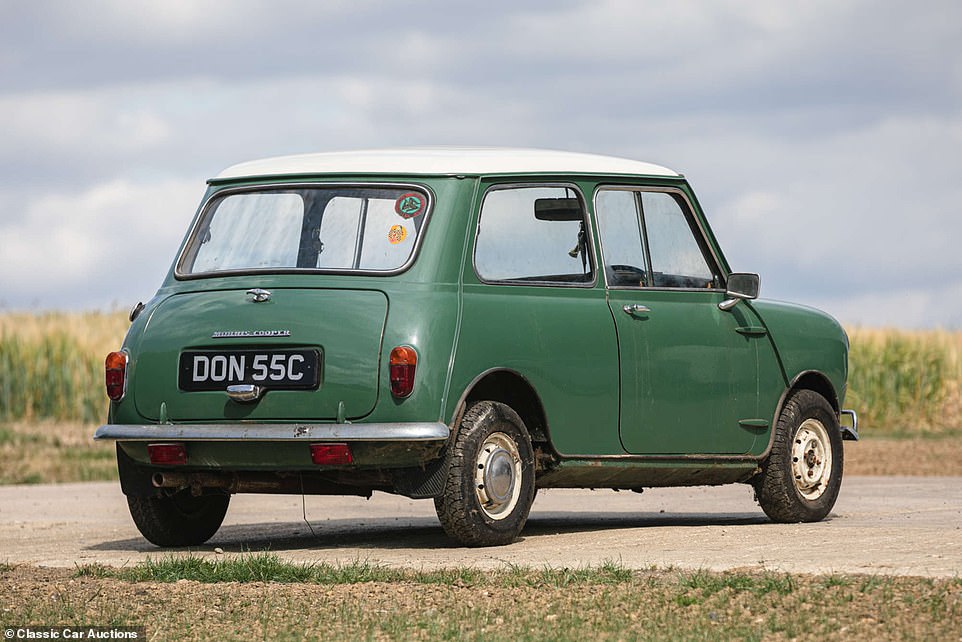 When the car was recovered from the garden shed it was still displaying a tax disc with an expiry date of 31 March 1988. It is believed that the Mini hasn’t been used on the road since, meaning it had been in storage for a whopping 34 years 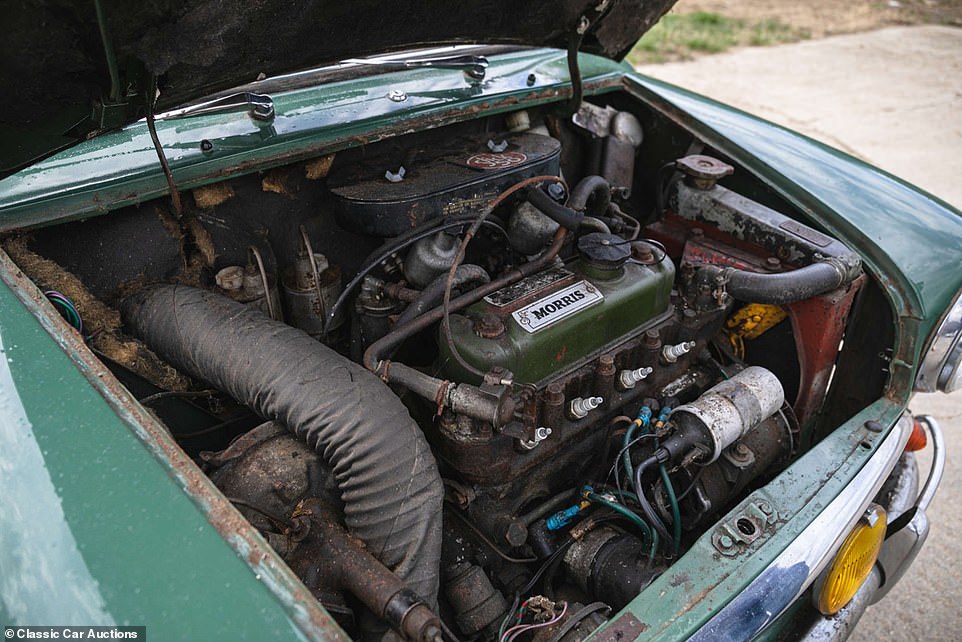 Given that it has been kept in a wooden shed for over three decades, the auction house did not attempt to start the engine before the sale – though Classic Car Auctions did confirm that it ‘rolls freely’ when pushed 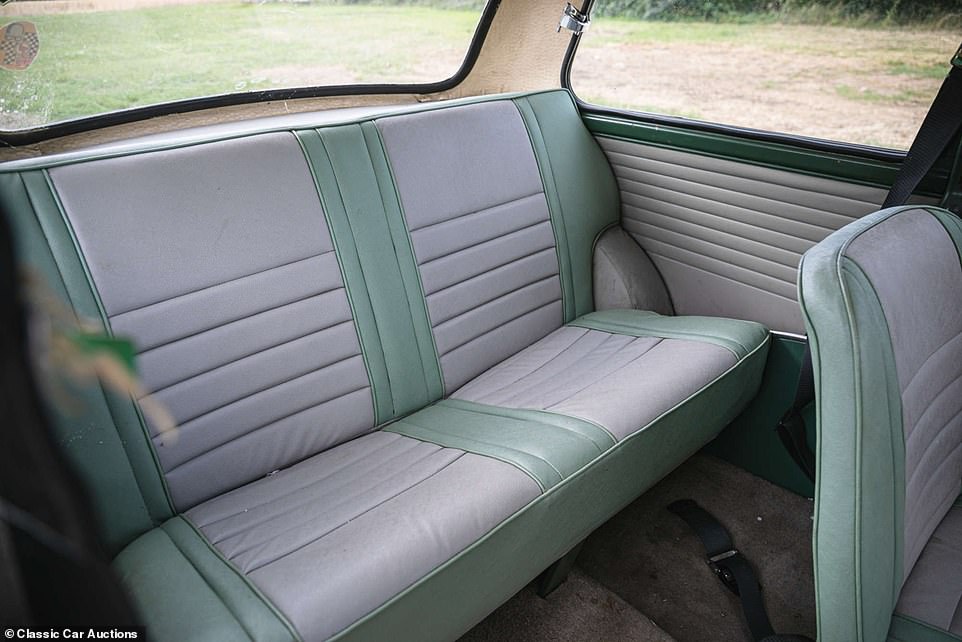 The vendor, now in his eighties, told Classic Car Auctions that he chose the Mini Cooper S instead of a Jaguar E-Type in 1965 because he needed back seats to take passengers on trips