Hang on to your hats. Range Rover has ripped the roof off its best-selling Evoque to produce the world’s first compact 4×4 luxury cabriolet.

The new £50,000 Chelsea tractor, pictured, is designed for fashionable, adventurous types who want wind-in-the-hair motoring, whether for an urban jungle shopping trip to Harrods and Harvey Nichols or family treks though the Cotswolds countryside.

The new model’s foldable fabric roof is, says Range Rover, the longest and widest fitted to any vehicle on sale today, and boasts that it’s created ‘the most exclusive and capable convertible in the world; a convertible for all seasons’.

Pictures and details were published this week ahead of its global debut at this month’s Los Angeles Motor Show.

It is the fifth model in the Range Rover family, which includes the original ‘baby’ Evoque that became a fashion icon when former Spice Girl turned fashion designer Victoria Beckham styled a limited edition ‘VB’ version.

Prices start from £47,500 for the Evoque cabriolet, which rolls off the Halewood production line on Merseyside and into UK and international showrooms from next spring.

The convertible’s automated roof stows away in 18 seconds and can be raised in 21 seconds, at speeds up to 30mph.

There will be two-litre petrol and diesel versions and two trim levels: HSE Dynamic and HSE Dynamic Lux. At night, an eyecatching puddle lamp graphic – featuring an outline of the Evoque Convertible – is projected from the base of the door mirrors to illuminate the ground below. 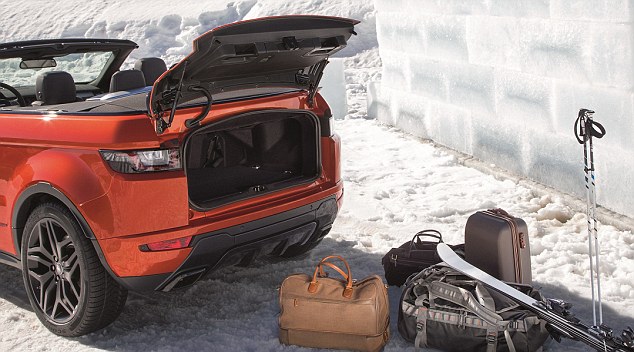 Its boot space is not reduced by its folding roof

Options include 360-degree Park Distance Control to boost confidence in confined spaces and multi-storey car parks at speeds up to 10mph.

A new high-resolution 10.2 in touchscreen features Jaguar Land Rover’s next generation ‘infotainment system’, InControl Touch Pro. This links with your smartphone to give door-todoor navigation, 3G connectivity and a premium sound system. 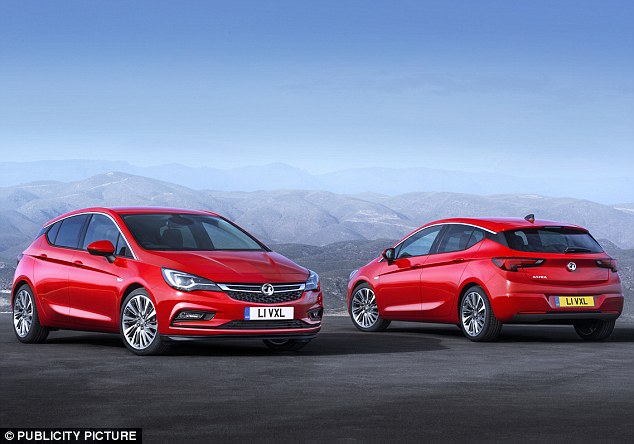 Vauxhall can be extremely proud of this Golden Steering Wheel

‘Some 40,000 orders have already been placed for the new Astra built at Vauxhall’s Ellesmere Port plant in Cheshire.’

Is price yet right to buy a Volkswagen? In the wake of its pounding over the emissions scandal, the punch-drunk German car maker is fighting hard to woo back customers.

That price gets you behind the wheel of the new Golf Match BlueMotion Edition 1.0 115PS TSI six-speed manual three-door.

‘The new cars arrive with an even higher level of specification than the Golf Match they replace,’ says Volkswagen.

‘The additions offer more than £1,100 in customer value if specified separately, but at a cost of just £100.’

If you’re driving a perky Fiat 500, you’re one in 1.5 million. That’s how many of the Italian superminis have been sold since the Fifties classic was re-imagined and updated in 2007.

Struggle to park in tight spaces? You need to call Alistair Moffatt.

Mr Moffatt, of Stunt Drive UK, put poor parking to shame by setting a new record for the tightest parallel parking in reverse – at speed – achieving a combined distance between two parked cars of just 34cm (13in); knocking 1cm off the previous record.

The successful parking attempt took place on Guinness World Records Day on Thursday at the legendary Brooklands site, near Weybridge, Surrey, the birthplace of British motorsport and aviation. 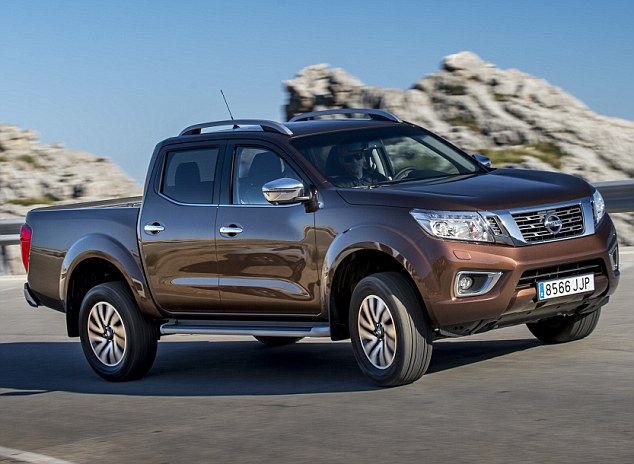 Nissan this week announced prices for its NP300 Navara pick-up – £18,376 for those who can claim back VAT

Nissan this week announced prices for its real-life Tonka toy, aka the beefy NP300 Navara pick-up, pictured. Popular among the selfemployed for its ability to combine business with pleasure, while neatly exploiting any tax breaks, the range starts with the King Cab twowheel-drive at £18,376 for those who can claim back VAT or £21,995 for everyone else.

Top of the range is the Tekna Double Cab 4WD at £29,095 (or £24,292 before VAT). The Navara range arrives in showrooms from January in five trim grades: Visia, Acenta, Acenta+, N-Connecta and Tekna.

Nissan describes it as ‘the rugged, dependable and capable workhorse with crossoverstyle comfort and class-leading technology’. It said customers will be able to tailor their vehicle to ‘meet the requirements of the toughest job or most demanding lifestyles’.

All models have a standard five-year/ 100,000-mile manufacturer’s warranty.