Rainwater everywhere on Earth has been found to contain dangerous levels of man-made ‘forever chemicals’ linked to cancer and other illnesses, a study has found.

Perfluoroalkyl and polyfluoroalkyl substances (PFAS) have many uses, including in firefighting foams, the non-stick coatings on frying pans, and textiles.

They are thought to get into the environment through industrial emissions, transfer from packaging, wastewater and evaporation from the foams.

Researchers from Stockholm University and ETH Zurich have conducted laboratory and field work on the presence and transport of PFAS for the past decade.

They claim they can be found in rainwater and snow in even the most remote locations on Earth, like Antarctica and Tibet.

The fluorinated chemicals have been linked to a wide range of human health concerns, including cancer, immune system disorders, obesity and fertility issues.

The researchers detected PFAS in the rainwater and snow in even the most remote locations on Earth, like Antarctica and Tibet (pictured) 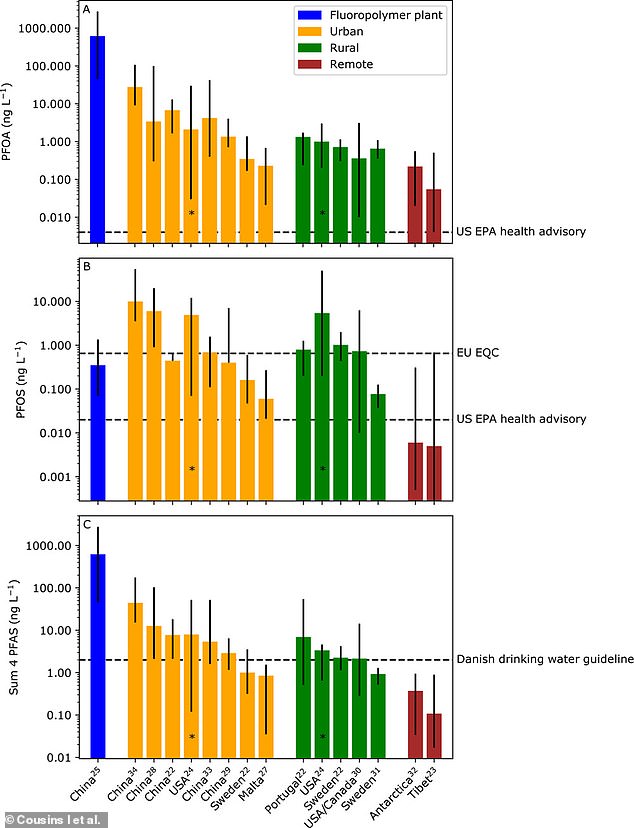 Levels of (A) PFOA, (B) PFOS, and (C) PFAAs (PFOA + PFNA + PFHxS + PFOS) in wet depositions collected at various global locations from 2010 to the present

PFAS are manmade chemicals used as oil and water repellents and coatings for common products including cookware, carpets, and textiles.

These endocrine-disrupting chemicals do not break down when they are released into the environment, and they continue to accumulate over time.

PFAS chemicals can contaminate drinking water supplies near facilities where the chemicals are used.

PFAS contamination has been detected in water near manufacturing facilities as well as military bases and firefighting training facilities where foam containing PFAS is used.

They also enter the food supply through food packaging materials and contaminated soil.

PFAS are known as ‘forever chemicals’ because of their extreme persistence in the environment – some take over a thousand years to degrade.

Major chemical company 3M first started manufacturing the two most notorious members of the PFAS family, PFOS and PFOA, in the 1950s.

Many scientific tests over the decades proved that the chemicals caused multiple health problems and, by 2002, 3M had largely phased them out.

Over the past 20 years, knowledge of the toxicity of PFAS has continued to increase, and thus guideline values of PFAS in drinking water, surface waters and soils have decreased.

The US environmental protection agency (EPA) now advises a safe PFOA concentration of 0.004 nanograms per litre (ng/L); the EU Environmental Quality Standards says PFOS should be 0.65 ng/L, while the US EPA suggests 0.020 ng/L for PFOS; and the Danish drinking water guideline for four PFAAs (PFOA + PFNA + PFHxS + PFOS) is 2 ng/L.

Despite this, the researchers have found that levels of some harmful PFAS in the atmosphere are not declining notably.

This is due to their degradation time, as well as the natural processes that continually cycle them back to the atmosphere from the surface environment.

One of the most significant natural cycling process for PFAS is the transport from seawater to marine air by sea spray.

Professor Ian Cousins, the lead author of the study, said; ‘The drinking water guideline value for one well-known substance in the PFAS class, namely the cancer-causing perfluorooctanoic acid (PFOA), has declined by 37.5 million times in the U.S.

‘Based on the latest US guidelines for PFOA in drinking water, rainwater everywhere would be judged unsafe to drink.

‘Although in the industrial world we don’t often drink rainwater, many people around the world expect it to be safe to drink and it supplies many of our drinking water sources.’ 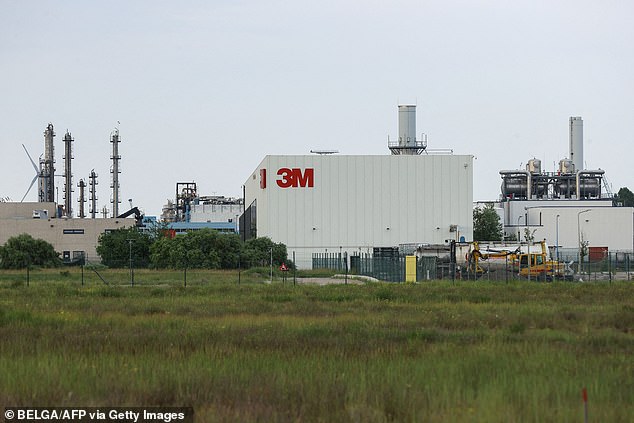 Major chemical company 3M first started manufacturing the two most notorious members of the PFAS family, PFOS and PFOA, in the 1950s. Many scientific tests over the decades proved that the chemicals caused multiple health problems and, by 2002, it had largely phased them out. Over the past 20 years, knowledge of the toxicity of PFAS has continued to increase, and thus guideline values of PFAS in drinking water, surface waters and soils have decreased

Pollution from four different PFAS were found to exceed advisory levels in Europe and the US.

These findings, published in Environmental Science & Technology, led the authors to conclude that a ‘planetary boundary’ has been crossed – there is no place on Earth where one is able to avoid the substances.

The researchers therefore suggest that PFAS usage and emissions are ‘rapidly reduced’, as the chemicals have poor reversibility.

Study co-author Professor Martin Scheringer said: ‘The extreme persistence and continual global cycling of certain PFAS will lead to the continued exceedance of the above-mentioned guidelines.

‘So now, due to the global spread of PFAS, environmental media everywhere will exceed environmental quality guidelines designed to protect human health and we can do very little to reduce the PFAS contamination.

‘In other words, it makes sense to define a planetary boundary specifically for PFAS and, as we conclude in the paper, this boundary has now been exceeded.’

Exposure to a type of man-made chemicals may cause menopause to occur two years earlier in women, a new study warns.

Researchers from the University of Michigan found that high levels of PFAS in blood samples contributed to an earlier menopause in women.

PFAS, which are used as oil and water repellents and coatings for consumer products, can enter water sources and disrupt ovarian function, they say.

The chemicals, which are widely used in food packaging, cookware and industrial foams, disrupt the endocrine system – the hormone-producing collection of glands that regulate sexual function.