Rail chaos could be over for weary commuters as the NSW government bows down to union demands in the hopes of avoiding further disruptions.

Transport Minister David Elliott on Wednesday announced modifications would be made to the $2.88billion New Intercity Fleet in order to appease the union’s requests.

Members of the Rail, Tram and Bus Union have refused to operate the trains over claims they are unsafe despite being approved by the National Safety Regulator.

The cost of the modifications is expected to cost taxpayers $264million with the major back-down marking a ceasefire in the two-year long dispute.

Rail chaos could be over for weary commuters as the NSW government bows to the union demands in hopes to avoid further disruptions (pictured, commuters at Central Station)

Mr Elliott said he hoped the government’s act of goodwill would put a stop to further disruptions and strikes on the network due to intensify on Friday.

‘My expectation from the union, of course, is that they wind back their industrial action,’ the transport minister told reporters.

‘These negotiations and this expense is in the best interest of the communities.

‘Am I happy about spending millions of dollars to modify what the safety regulator has said [are] perfectly good trains? Absolutely not.

‘But the cost of this industrial action, the cost to the NSW economy, the inconvenience to the commuters has to be front of mind when it comes to running public transport.’

Mr Elliott said if the union agreed to the new deal that physical alterations to the fleet would begin in August, with trials expected within months.

However, Rail Tram and Bus Union state secretary Alex Claassens said the planned industrial action is still on the cards until members see the proposal in detail. 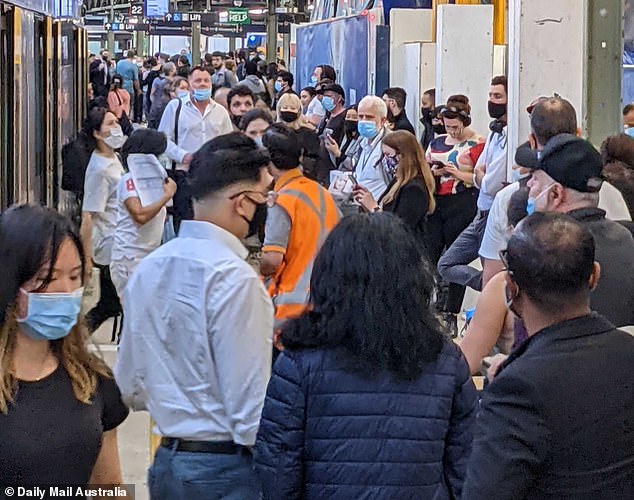 Transport Minister David Elliott on Wednesday announced modifications would be made to the $2.88b New Intercity Fleet to appease the union’s requests (pictured, Sydney commuters)

‘We are back to where we were a couple of months ago. The [new intercity fleet] is going to get fixed, but we are not out of the woods yet,’ he said.

‘We have been here before, and we want it all in writing.’

Negotiations with senior government officials are expected to take place on Thursday night.

The union are wanting to make sure the cost of the modifications aren’t deducted from rail workers’ pay.

‘Once we see the details of their offer in writing, we’ll be talking with our members about what that means for further industrial action and whether we should withdraw it or continue it,’ he said.