Las Vegas Raiders defensive end Carl Nassib’s decision to come out as gay has been met with a wave of support from a diverse cross section of the United States.

Members of the LGBTQ community, current and former athletes, politicians, and a number of prominent celebrities praised Nassib’s courage as he became the first active NFL player to publicly reveal he is gay.

‘The ability to live an authentic life is so important,’ read a tweet from tennis legend and LGBTQ activist Billie Jean King. ‘Sending love and support to Carl Nassib of the @Raiders, who has bravely made history as the 1st active NFL player to come out.’

‘Good for you Carl,’ tweeted three-time NFL Defensive Player of the Year JJ Watt. ‘Glad you feel comfortable enough to share and hopefully someday these types of announcements will no longer be considered breaking news.’

Jason Collins, the first openly gay player in NBA history, tweeted that he was ‘very proud’ of Nassib and ‘incredibly happy for him.’

Nassib, 28, made the announcement Monday in a video on Instagram, explaining that he’s normally a private person, but wanted to reveal that he’s gay because ‘representation and visibility are so important.’

Las Vegas Raiders defensive end Carl Nassib’s decision to come out as gay has been met with a wave of support from a diverse cross section of the United States. Nassib, 28, made the announcement Monday in a video on Instagram, explaining that he’s normally a private person, but wanted to reveal that he’s gay because ‘representation and visibility are so important’ 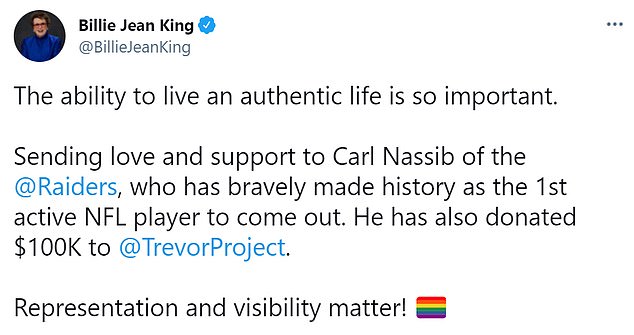 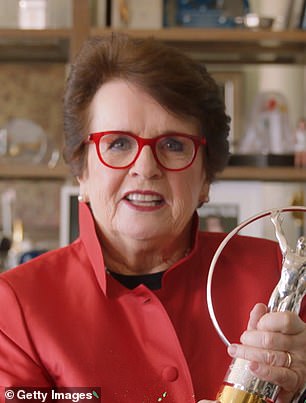 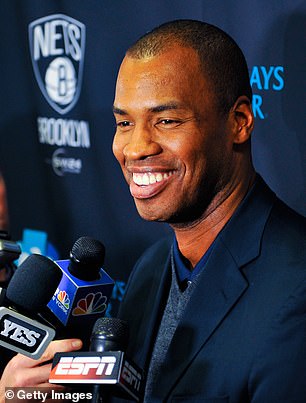 Jason Collins played 12 NBA seasons before coming out as a free agent in 2013. Later he signed with the Brooklyn Nets, and in doing so, became the first openly gay player in US team sports

‘I actually hope that one day videos like this and the whole coming out process are just not necessary,’ he said. ‘Until then, I am going to do my best and do my part to cultivate a culture that is accepting and compassionate.’

Nassib is obviously not the NFL’s first gay player. Several have come out publicly since retiring and, presumably, many more have remained closeted for fear of backlash.

For instance, former New York Giants and Washington Redskins linebacker Roy Simmons came out after leaving the NFL in 1983, telling the New York Times 20 years later that he waited to do so because he feared it would end his career. Simmons died in 2014 after being diagnosed with HIV in 1997.

‘The NFL has a reputation,’ Simmons said in 2003, ‘and it’s not even a verbal thing — it’s just known. You are gladiators; you are male; you kick butt.’

Butch Woolfolk, a teammate of Simmons’s in New York, said he also played alongside gay players with the Houston Oilers and Detroit Lions.

Warren Moon, who played quarterback for those Oilers teams, appeared to confirm Woolfolk’s claim while commending Nassib for being the first active NFL player to come out of the closet.

‘Really proud of Carl Nassib,’ Moon tweeted. ‘The first active football player to ever do so. I played with several guys who never were comfortable enough to go public. They were great teammates, & obviously very talented.

‘As long as they helped us win and were great teammates- their sexual preference was never a issue,’ he continued in another tweet. ‘We live in a different time now where diversity is much more accepted. Cheers Carl, and I hope this lets other athletes know, its (sic) OK to say who you are.’

Nassib was actually thanked on Twitter by Michael Sam, a former Missouri defensive end and Southeastern Conference Defensive Player of the Year who came out before being drafted by the St. Louis Rams in 2014 but was cut before the season started. Not only did Sam appreciate Nassib’s honesty, but also his $100,000 donation to the Trevor Project, which is aimed at preventing suicide among LGBTQ youth.

‘Carl Nassib thank you for owning your truth and especially your donation to the @TrevorProject,’ Sam wrote. ‘LBGTQ people are more likely to commit suicide than heterosexuals. I hope and pray people will take note to this. Thank you again Carl and look forward to seeing you play on the field.’

NFL free agent Ryan Russell, who came out as bisexual in 2019, put Nassib’s decision into perspective by stressing the importance of being authentic, both publicly and privately: ‘The @NFL is not changing; LGBTQ+ athletes are a part of every sport and always have been. The only thing changing is the amount of love, acceptance, and comfortability we feel every day just being ourselves and being supported by our teammates, coaches, and the game’s fans.’

The Atlantic’s Jemele Hill wrote that Nassib’s decision will have a positive impact for LGBTQ youth and closeted NFL players.

‘Carl Nassib likely isn’t the only active gay player in the NFL, but him coming forward will be huge for those who haven’t gotten there yet,’ Hill tweeted. ‘Very courageous decision that will not only help other players but so many young people in this country.’

Actor and activist George Takei praised Nassib while sharing his own struggles with coming out publicly.

‘It took me until I was in my late 60s to come out,’ Takei tweeted. ‘Such is the power of the closet. And I know what it’s like to have the eyes of the world on you when you do finally speak your truth.

‘Bravo, Carl Nassib. You have tackled a great deal today.’

Nassib also received support from the Raiders and head coach Jon Gruden, as well as teammates Solomon Thomas and Darius Stills, the latter of whom commented, ‘proud of you brotha!’

‘I learned a long time ago what makes a man different is what makes him great,’ Gruden told ESPN.

‘The NFL family is proud of Carl for courageously sharing his truth today,’ read a statement from Goodell. ‘Representation matters. We share his hope that someday soon [statements] like his will no longer be newsworthy as we march toward full equality for the LGBTQ+ community.’

Penn State coach James Franklin, for whom Nassib played collegiately, said he was proud of his former pupil.

‘I am very proud of Carl for his courage and voice,’ Franklin said. ‘This announcement doesn’t surprise me because if you know Carl, you know his strength. Carl’s story continues to add chapters which will have an impact well beyond the field of play.’

Later, on Twitter, Franklin wrote: ‘I was proud of Carl when he led the nation in sacks, but I’m even more proud of him now.’

‘Proud of Carl Nassib for courageously living his truth,’ Booker wrote on twitter. ‘Representation matters and this historic moment will help so many LGBTQ+ youth. Thank you, Carl, for your incredible leadership.’