This is the terrifying moment a gunman pulled out a pistol when he was asked to wear a face mask in a kebab shop.

CCTV footage shows how an argument ensued before the raging man pointed the weapon at the delivery driver’s chest who had asked him to comply with lockdown regulations.

Armed police had to be called to the Rhondda Takeaway in the village of Pentre, in South Wales, to defuse the face mask row.

They later arrested a 57-year-old man on suspicion of possessing an imitation firearm with intent to cause fear of violence.

The gunman (right) pulled out a pistol after he was asked to wear a face mask by a delivery driver (left) at Rhondda Takeaway in the village of Pentre, in South Wales which is in a firebreak lockdown

Shop owner Norma Hemming, 62, said: ‘The man was arguing with the driver and then he pulled a gun out.

‘My husband came from behind the counter then and the man was pointing the gun at him.

‘But the man with the gun was trying to get around my husband to the driver. It was the driver he had the issue with because the driver asked him to put on a mask when he came into the shop.

‘He was saying things like he was Jesus and that Bill Gates wants us microchipped and they all want us controlled and all things like that.’

Norma said the row flared when the customer was asked to wear a face covering on Thursday night while in the takeaway in the village – a part of Wales under firebreak lockdown.

‘He came in as a customer and that’s when the driver said to put a mask on – that’s when he pulled out the gun,’ she added.

‘The driver got out the back and rung the police and that’s when all the armed police came. 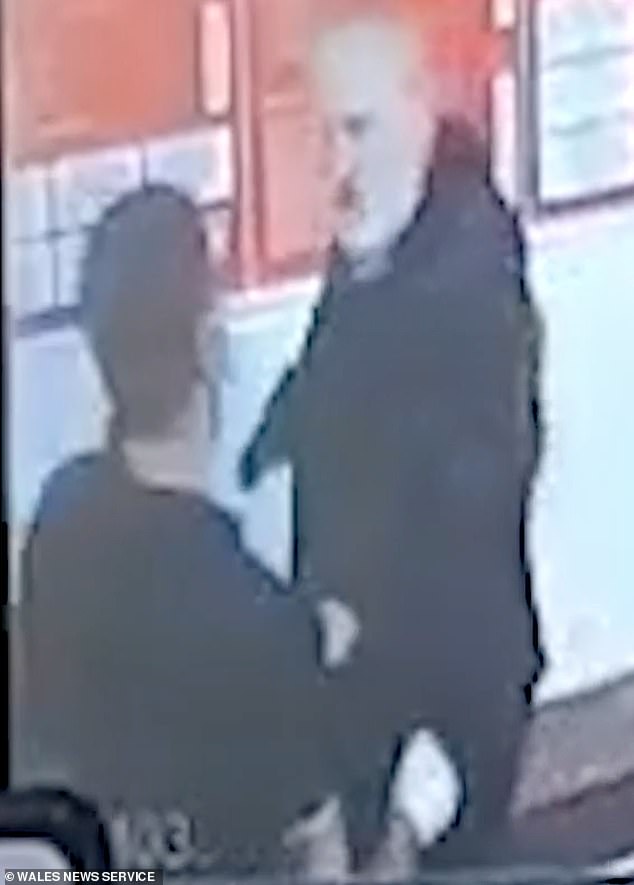 ‘We’ve never had anything like this before. It’s all family-run except for the drivers. All of us work here, the family.

‘You hear about this stuff on the news but you never expect it to happen to you. You don’t expect anything like this.

‘We’re nervous but we can’t let him win – it’s our livelihood. 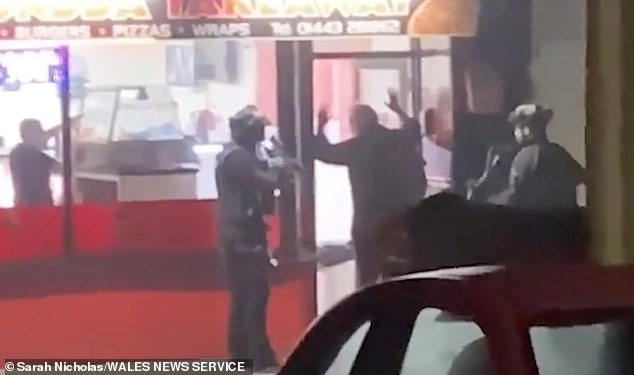 ‘If asking people about a mask is going to cause something like this I’d rather not bother.

‘Looking at the video makes you think: ‘Oh my God – what could have happened?’.’

A spokesman for South Wales Police said: ‘Shortly before 10.30pm last night officers were called to an incident at a takeaway restaurant on Gelligaled Road in Pentre, Rhondda concerning a man with a firearm.

‘Police officers, including armed officers, attended and a 57 year-old man from the Ystrad area was arrested on suspicion of possessing an imitation firearm with intent to cause fear of violence.

‘He was taken to Merthyr Tydfil police station.’