An RAF pilot is set to become the first non-American to fly Air Force One.

The Wing Commander will fly the President, his advisors and distinguished guests with the elite team of military aviators.

The pilot, who has not been named, will first fly and co-pilot other aircraft before being placed on the reserve list for Air Force One.

A source told the Sunday Express: ‘The wing commander chosen served a number of years in the US and is well acquainted with how the US Air Force operates.’

The President and his top team have 15 converted aircraft for official visits, which includes two VC-25s which take turns serving as Air Force One.

The VC-25s, a military variant of the Boeing 747, boast a private office, a medical room, a conference room and a communications hub, and can be refuelled in the air.

A source said the addition of the former RAF pilot represents ‘the symbolic culmination of a four-decades-old and deep-rooted exchange programme between the USAF and RAF founded on trust’.

RAF pilots have previously flown, co-piloted and crewed US aircraft including the stealth bombers U2 and B2 Spirit. 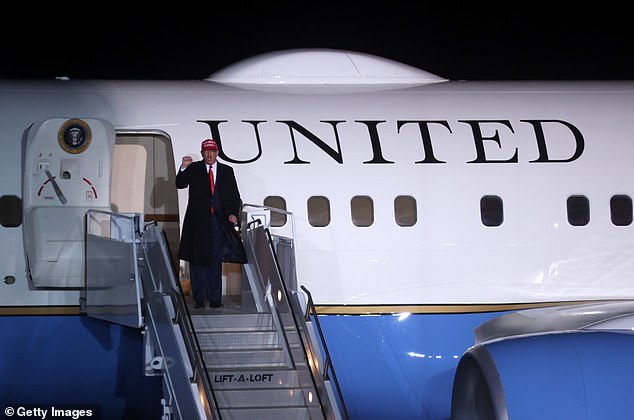 The bombers are capable of carrying 2,400 pound B83 nuclear bombs.

The unnamed pilot will join the reserve list after completing his training on the other aircraft.

The VC-25s are set to be replaced because they have become increasingly less cost-effective.

In 2015, the Air Force said the Boeing 747-8 would be the next presidential aircraft, but Donald Trump criticised the move because of its cost.

MailOnline has contacted the RAF and USAF.