The boss of Radio 2 has announced he is stepping down a week after figures showed the station has lost hundreds of thousands of listeners on the previous year.

Lewis Carnie, who has been responsible for a controversial revamp of the station’s schedules in recent years, yesterday said he was leaving Radio 2 to move on to ‘new challenges’.

His departure comes over a week after audience figures revealed that Radio 2 had fallen from 14.89 million to 14.44 million weekly listeners across the year.

Lewis Carnie (pictured), who has been responsible for a controversial revamp of the station’s schedules in recent years, yesterday said he was leaving Radio 2 to move on to ‘new challenges’

Mr Carnie, senior head of content commissioning for Radio 2 since 2016, oversaw the decision to replace Chris Evans with Zoe Ball on the show’s flagship breakfast slot when the former Top Gear presenter left the station.

In October figures revealed Miss Ball had attracted the fewest listeners to the show in a decade with 7.9 million tuning in.

Figures last week showed an improvement with 8.2 million weekly listeners, but is still a long way short of the 9.1 million listeners from a year earlier, when Evans was presenting.

Ball took over the show in January last year.

Mr Carnie, who will leave after this summer, was also at the helm for the ill-fated decision to team up Jo Whiley with Simon Mayo on the station’s drive-time show in 2018.

It was seen as part of a wider plan to give women more prominent roles on the station, but it backfired when listeners complained about the pair’s lack of chemistry.

The duo was replaced by Sara Cox in the slot and Mayo quit the station altogether. 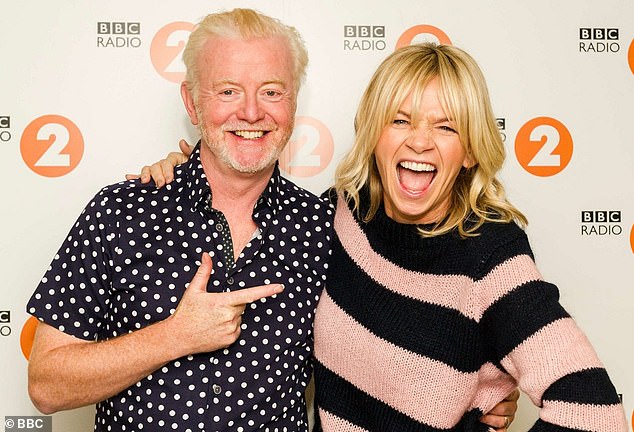 But Mr Carnie is credited with spotting and securing top talent for the station, bringing presenters including Paul O’Grady, Sara Cox and Rylan Clark-Neal to Radio 2.

While the most recent figures for the station went up by more than 200,000 listeners on the previous quarter, across the year there has been an overall decline in audience numbers.

A BBC insider defended Mr Carnie’s record saying the schedule, which was introduced a year ago, was ‘bedding in well’ and pointed to the quarterly increase.

Yesterday Mr Carnie said: ‘After 19 glorious years at BBC Radio 2, it’s time to take a leap of faith and move on to new challenges.

‘I’m proud that the network keeps millions of people entertained each day and would like to thank everyone in Wogan House for their dedication and passion, which makes Radio 2 both a very special radio station and a fantastic place to work.’

Mr Carnie joined the BBC in 2001 as an executive producer for live music and events at Radio 2.

Controller of BBC Pop Lorna Clarke told staff in an email: ‘Anyone who knows Lewis knows he loves the world of entertainment and that he’ll be a hard act to follow.’