Lockdown does strange things to a man. But I never believed my husband, Ivo, would allow me to cut his hair.

I’ve never cut anyone’s hair, let alone his. Even my cockapoo, Ziggy, bolts as she sees me approaching with scissors.

While I’m not precious when it comes to my own hair (I never brush it and wash it in dog shampoo), my husband is extremely proprietorial, proud and fussy.

He will only use a particular Klorane product, which proclaims it is for ‘cheveux fins, sans volume’ and he treks across the whole of London — indeed, would travel any distance — for a trim as he trusts only one person in the whole world when it comes to his crowning glory. And that is not me.

That person is Colin Murphy of Blades Salon, EC2.

Lockdown does strange things to a man. But I never believed my husband, Ivo, would allow me to cut his hair (pictured before

But still, lockdown. He is beginning to look scatty and scarecrow-like, as we all are, and so he reluctantly agreed to submit, after I’d shown him a photograph of Carrie Symonds cutting my brother’s hair in the kitchen at No 10 and agreeing the result was an improvement.

Indeed, the outcome was hailed by a top hairdresser yesterday as a ‘more textured look’, especially as the PM’s hair was in need of ‘some perfecting’.

Carrie sent me a link for the scissors she’d used for the operation (Haryali London Professional 5.5 in Hairdressing Barber Scissors) but, unfortunately, all non-essential retail is closed.

At first, it was a choice of kitchen scissors or nail scissors. I chose the former to attend to my anxious husband, sitting in his chair with a little white towel draped over his shoulders. ‘Because my hair is so fine and aristocratic it lies flat on my head,’ he told me, as if I were an expensive Mayfair crimper. ‘I want layers and I want it beautifully done, like Colin does,’ he finished in hope.

I had no idea what I was doing.

More advice came from the Downing Street Barbershop. ‘Top tip: Use a fine-tooth comb.’ Followed by: ‘And have a small gin beforehand to steady the hand.’ It is my understanding that Kelly, the hairdresser to the residents of No 10, was on hand remotely to dispense styling advice.

Given the high stakes, plus Ivo’s attachment to his barnet, I thought there was no shame in asking Colin Murphy himself also to assist, which he did via the Houseparty app, so he could see the atrocity being carried out in real time.

He first taught me how to hold the scissors (I eventually found a blunt pair of hair scissors in a bathroom cabinet). ‘Never use hair scissors to cut paper — they are precision tools!’ he told me as I tested them. 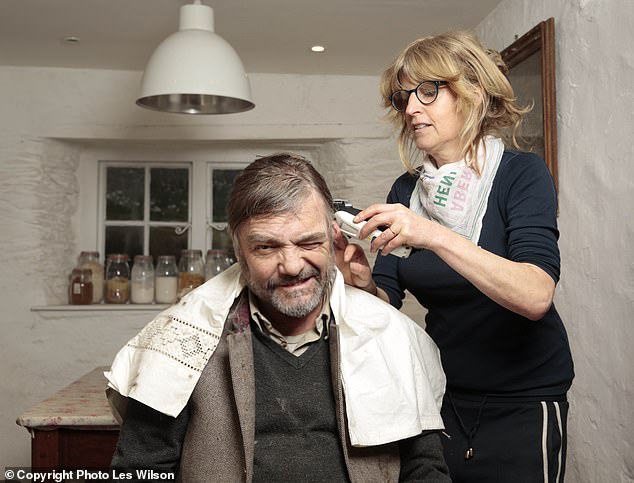 ‘The scissors have to become an extension of your hand!’

It was very tricky. ‘Only move your thumb,’ he said, and told me to use the comb to separate Ivo’s hair into a ‘horseshoe’ shape so the top and the sides were two different areas, and then do the whole head in sections.

‘It’s called vertical graduation, don’t take off more than a centimetre or so,’ he warned as I hacked away.

I couldn’t manage the comb and the scissors, so I deployed Ivo’s Wahl beard clippers instead and started shearing, taking the feathery strands extruding from the comb and zipping them off.

‘His hair doesn’t stick to the comb,’ I complained. ‘Yes, it’s too aristocratic,’ said Colin.

After ten stressful minutes, I assessed my handiwork. I had turned my husband into the Führer. 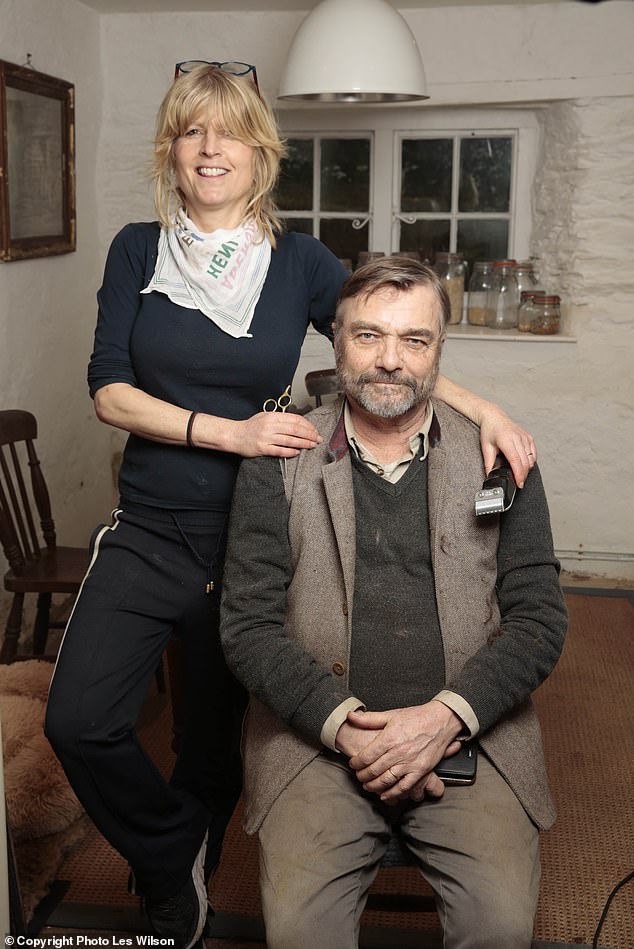 After. Floppy fringe. Side parting. Short back and sides. The only thing missing was the toothbrush moustache

Floppy fringe. Side parting. Short back and sides. The only thing missing was the toothbrush moustache.

Needless to say, no good deed goes unpunished. Ivo is booked into Blades on April 12 for emergency corrective surgery. And I made an appointment with a very stiff gin.

Ivo’s verdict: The sight of Rachel wielding a pair of newly acquired ‘Manicare Stainless’ blades and a weighty Wahl beard trimmer made me feel a little like Odysseus attacked by the Furies, or Samson about to be unmanned by Delilah. Scary.

As the snipping and the buzzing neared my ears, I wondered whether there was enough cotton wool to staunch the inevitable bloodletting that would surely follow.

My terror was that Rachel would take her duties too seriously and I would come out looking like Elvis Presley after that famous buzz cut in the movie GI Blues. In the end, she still made me look like Charlie Chaplin in The Great Dictator.

At least she didn’t ask me if I needed ‘something for the weekend.’ She knew I didn’t.