Boris Johnson has been criticised by his own backbenchers for green-lighting a law allowing no-fault divorces from as early as next month.

The Prime Minister may face a rebellion from swathes of his own MPs during the House of Commons vote on Monday, and has been accused of rushing through the plans in lockdown, when many marriages are under increased stress.

The reforms will mean a ‘no-fault’ divorce can be granted to a couple after just six months, rather than the currently enforced separation by agreement after two years.

It will also allow one partner to initiate divorce proceedings and begin a 20 week ‘reflection period’ without notifying their spouse, reported The Daily Telegraph.

Dozens of Conservative MPs are set to oppose the motion, however, with Sir Edward Leigh, Fiona Bruce and Sir John Hayes writing to 200 of their colleagues that the reforms would leak to ‘an immediate spike in divorce rates’.

The letter, seen by the Daily Telegraph, also warns that ‘there is simply no public support for this Bill – which was not in the Conservative manifesto.’ It adds: ‘Living in lockdown during the coronavirus crisis has exacerbated difficulties in many relationships.

‘Now more than ever we need to provide much more support for couples – and their families – many of whom desperately want to make their marriages work; as drafted this Bill is not the way to achieve this.’

Despite the backbench rebellion, the new law is likely to pass by the end of July due to support from Labour and the Liberal Democrats. 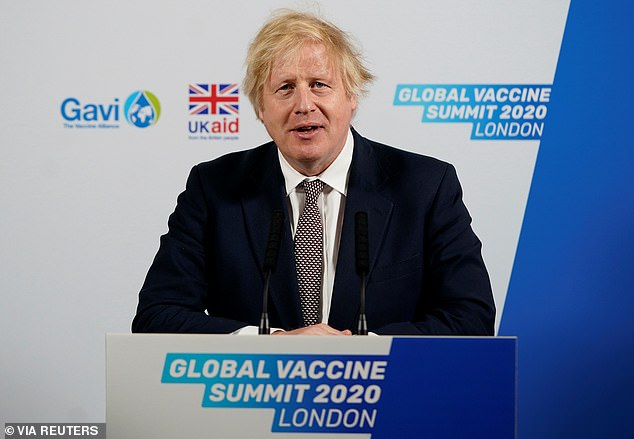 The Prime Minister may face a rebellion from swathes of his own MPs during the House of Commons vote on Monday, and has been accused of rushing through the plans in lockdown, when many marriages are under increased stress

Government whips will meet with a rebel delegation, who will demand the proposals be watered down, before the vote.

Sir Edward, who wants divorces only to be granted after a minimum of nine months, said: ‘I don’t understand why the Government is going for this quick-style divorce.

‘The killer point is if you make something easier it will happen more often.

‘It is a strange time to be doing it [during the coronavirus lockdown] when people might be vexed or unhappy for various reasons.

‘We don’t understand why – in the present time – it is necessary to do this.. I assure you that in the Dog and Duck [pub] in Grimsby or Scunthorpe there is no great demand for no-fault divorce.’

A Ministry of Justice spokesman said: ‘We will always uphold the institution of marriage. But when divorce cannot be avoided, the law must not create conflict between couples that can harm any children involved.

‘Our reforms remove the needless ‘blame game’, while ensuring there is a minimum six-month timeframe to allow for reflection and the opportunity to turn back.’